How a Single Email Changed a Life 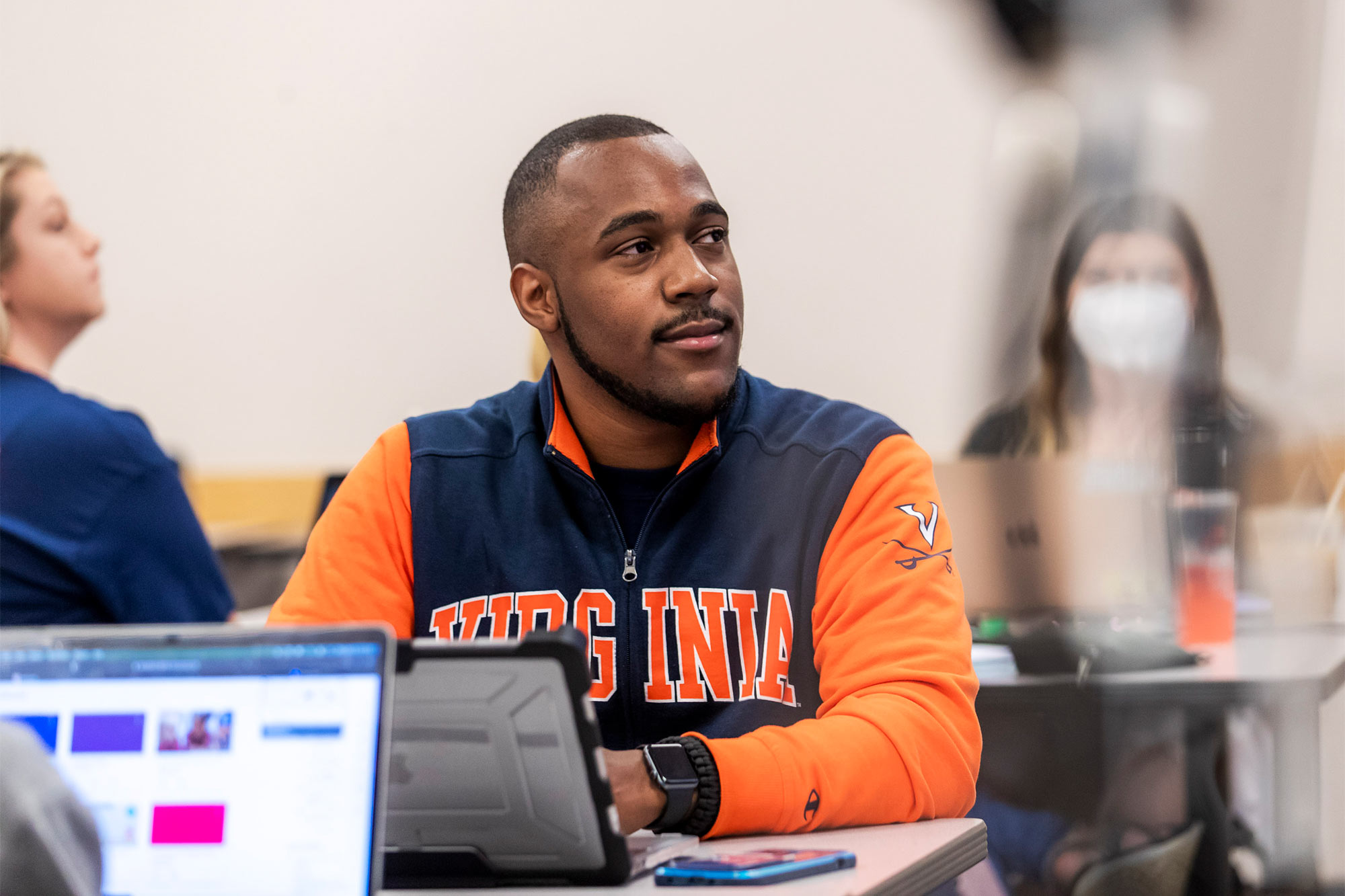 As one of UVA’s inaugural Piedmont Scholars, Quana Dennis has taken advantage of all UVA has to offer. (Photo by Erin Edgerton, University Communications)

It was summer 2021, a week before classes were to start at the University of Virginia. Quana Dennis was getting ready to send in his final loan application paperwork. A Charlottesville resident, Dennis had transferred to the University after earning his general studies degree at Piedmont Virginia Community College, which is just on the other side of Interstate 64 from UVA.

His plan for the coming two years at UVA was to take out loans, earn his degree in elementary education from the School of Education and Human Development and hold down a part-time job, just like he’d done since graduating from Charlottesville High School in 2017 – study full-time, work part-time.

Then, a single email upended everything.

It notified Dennis that he had been named a Piedmont Scholar, one of 10 in the program’s very first class. Announced just months earlier by President Jim Ryan, the award covers full in-state tuition and fees and is given to students who transfer from PVCC as third-year students and are selected as recipients of UVA’s University Achievement Award.

For Dennis, the award has been life-changing. It has allowed him to put all of his energy into studying and throwing himself into the UVA community.

“At first it was so weird, because I was so used to working and doing everything else,” he said. “It’s just great to focus on school and just focus on the UVA community and the different things I’m involved in, and just have a great experience.”

Looking at Dennis’s résumé, it is clear he jumped into UVA life with both feet. He is on the Big Events committee as a Fourth Year Trustee. He serves on UVA’s Student Council as the co-director for community engagement. He is a peer adviser in the Office of African-American Affairs. He recently volunteered during Final Exercises and summer orientation.

Whether deliberately or not, Dennis has made it his mission to be a welcoming face to new UVA students while diving into academics. UVA Today has been in touch with him since last September to get a feel for his life as a Piedmont Scholar and a Wahoo who simply cannot not give back.

Temperatures in Charlottesville were just above freezing, and a light but steady breeze made for a frigid February day. But Zeus was in high spirits. The labrador retriever mix was visiting Grounds with members of the Third Year Council for a fundraiser for the Charlottesville-Albemarle SPCA, a local no-kill animal shelter.

A member of the council, Dennis was in typically cheery spirits. “Any proceeds we get, we’re going to match that,” he said. “Today we have muffins, some SweeTarts and some hot chocolate. And you can come out and pet Zeus!”

Mr. Dennis ‘Helps When I Have A Question’

A few months later we met Genevieve Griffin, a second-grader at Woodbrook Elementary School where Dennis was student teaching. The 8-year-old said Dennis has been helping her and her classmates learn about famous people in history.

“He helps when I have a question,” she added. 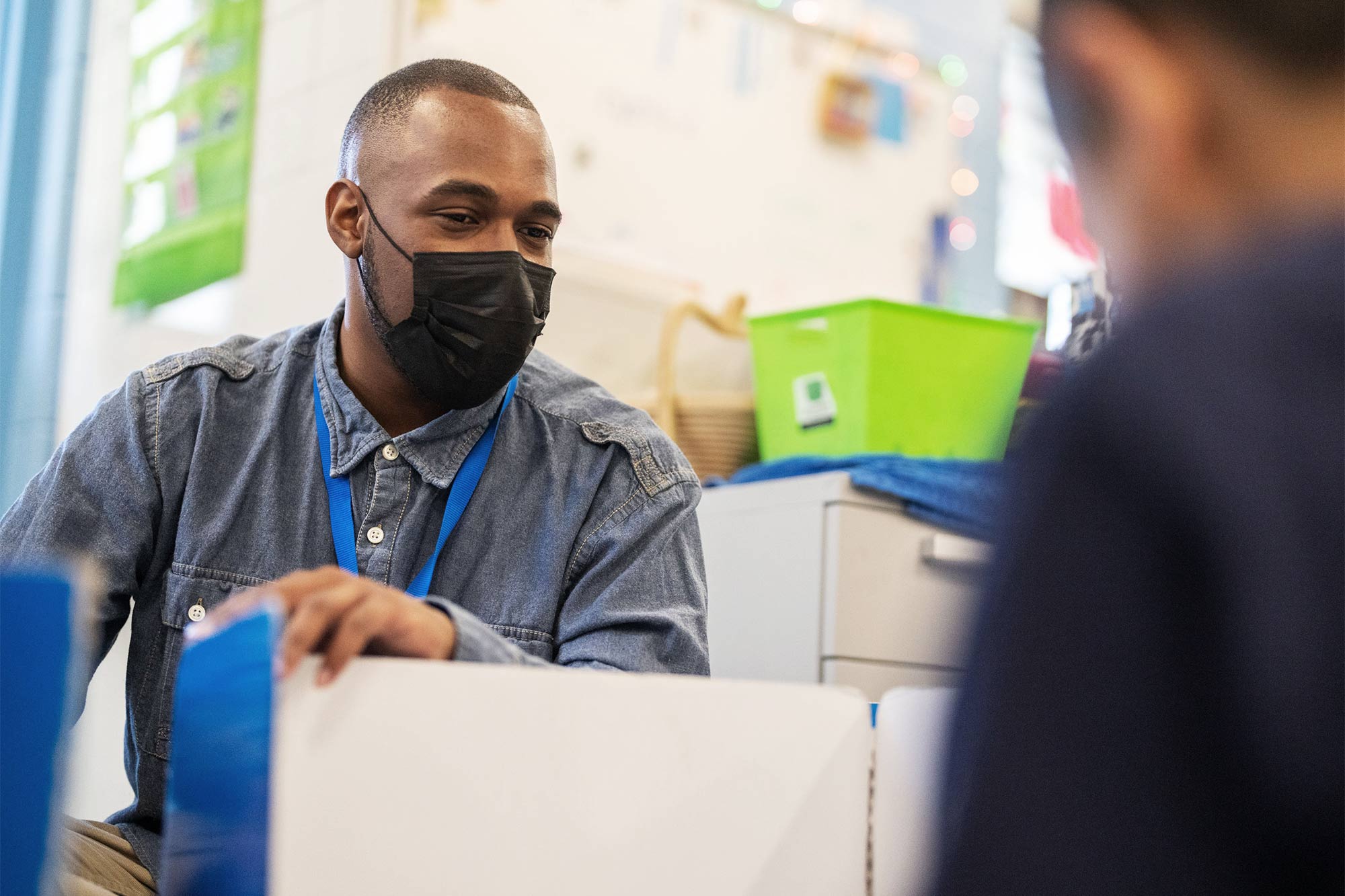 Dennis is a student teacher at Woodbrook Elementary School and works with second-graders, who adore him. (Photo by Sanjay Suchak, University Communications)

“He always is on time and he helps out with the kids around the room,” Wolfe said. “Usually when you get practicum students, they like to just sit in the background and observe – and that’s part of it.

“But he gets up and walks around the class and helps the kids that need extra help without them even asking him,” she said. “All the kids love him, and they were like ‘Where is Mr. Dennis?’ last week when he was on spring break.”

As another part of his scholarship in the School of Education and Human Development, Dennis is an undergraduate research assistant with Teachers in the Movement, an oral history project at UVA that explores how educators participated in the U.S. civil rights movement from 1950 to 1980.

Dennis is also part of the production team for the movement’s eponymous podcast, which listeners can subscribe to on several platforms.

“Undergraduate research assistants play an integral role in the Teachers in the Movement project’s research and implementation,” said director Derrick P. Alridge. Dennis was one of three such assistants last spring.

“As an aspiring elementary school teacher himself, Quana brings a unique passion and understanding to the project and interviews,” Alridge said. “He has served in supporting and lead roles in interviews, and offers incredible warmth and sincerity in the interview space – attributes we know he’ll build off in the classroom to connect with current and future students.”

All In On Finals Weekend and Summer Orientation

In May, Dennis volunteered for all three days of Finals Weekend as a new member of the Fourth Year Trustees. He worked the Class of 2022 party at Alumni Hall on Friday evening. On Saturday, he worked on the southwest terrace of the Rotunda and was back Sunday helping with the flow of people on the north plaza steps.

“I wanted to volunteer for graduation to ease the process of graduates walking the Lawn, and provide positive energy,” he said. “Seeing everyone line up to the Rotunda eager to walk the Lawn made me excited for when I graduate. It was an eye-opening experience, seeing how much it takes for gradation to run successfully and without any hiccups.” 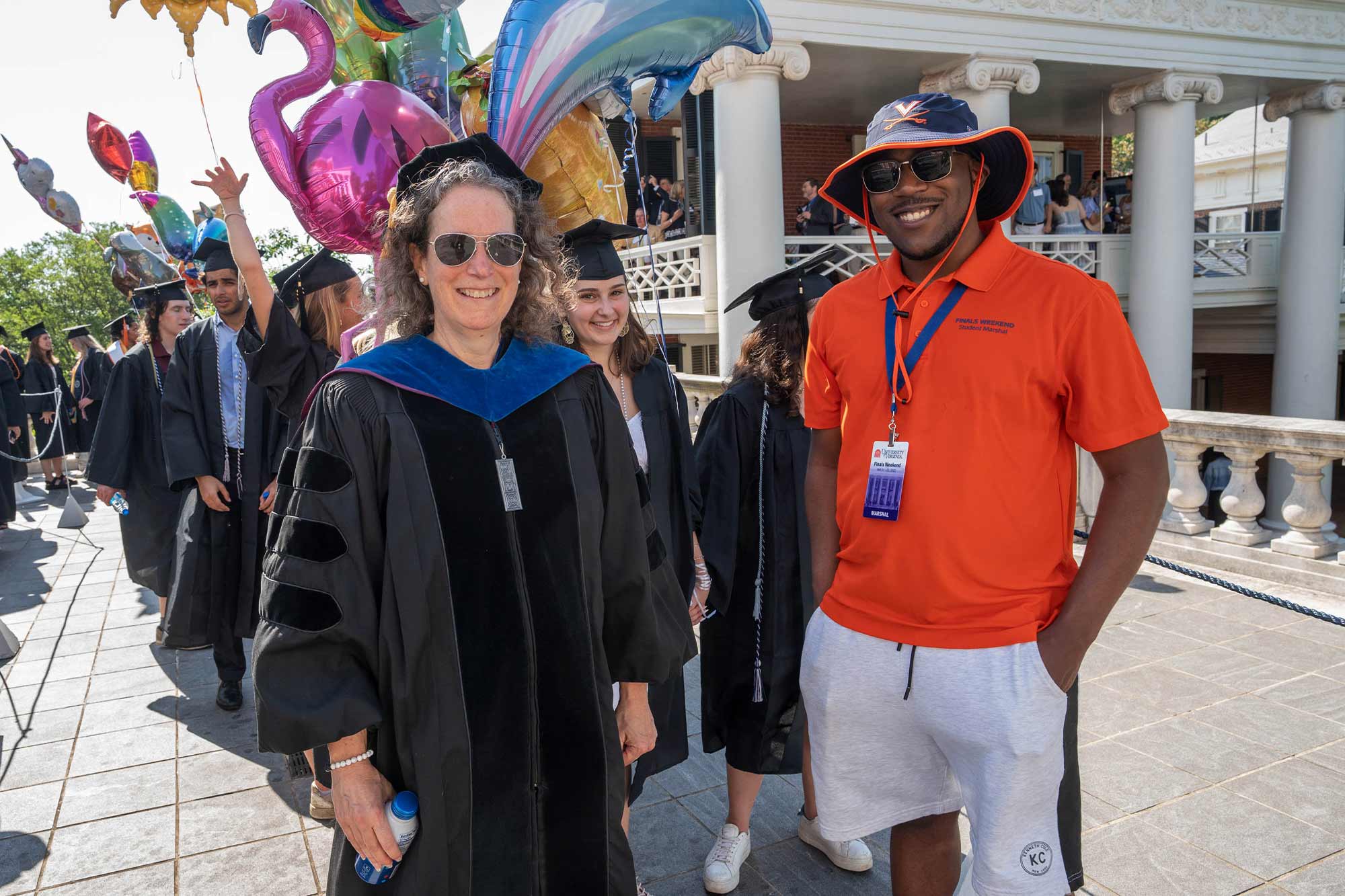 Dennis volunteered during Finals Weekend. “Seeing everyone line up to the Rotunda eager to walk the Lawn made me excited for when I graduate,” he said.

Dennis was back on Grounds in late June and worked all 10 sessions of UVA’s Summer Orientation for incoming first-year and transfer students. He said he wanted to be there as a listening ear for new students, especially since he’d just completed his first year at UVA. He could help.

“I also wanted to tell the new students to be comfortable being uncomfortable” because change is inevitable, he said. “I came to UVA with an open mindset, not trying to shelter myself from people. Just get involved and talk to everybody.”

Now that Dennis is a fourth-year student, much of his time will be spent student teaching.

Looking back to when he learned he’d been named a Piedmont Scholar last year, his mind goes to his mother, Michelle Washington. She was the first person he called when he got that email.

Washington, a single mother, raised Dennis and his two older sisters, Quamia and Quandra, in Charlottesville. “She did a great job. She still is a huge support and just growing up, we were in the church, so it was our community. I have a pretty large family of aunts and uncles, so they were always around as well. Growing up, I had a really nice childhood.”

Dennis says he was raised to value giving back and he credits his mother for showing that loving example. “She’s just so sweet and just so caring and just so giving. And [she] just is always smiling and ready to help out with anything. She’s just the focal point of where I get it from.”

“Everything that he said about me, I would say about him,” Washington said. “He loves teaching. He loves to talk to people. He just has the biggest heart. I’ve never met anyone like him in my whole entire life.”

Washington said she worried for her son when he was growing up because his father was not in his life. She pushed all of her children to go to college.

“I told them – all my kids – you’re going to make something of yourself,” she said. “A lot of young Black men, they don’t have that male figure to look up to, or the people around them are successful because they play basketball or they play football. And I knew Quana wasn’t that type of kid.”

Dennis would get puzzled looks when he told his male classmates, “No, I don’t want to play basketball or football. I want to be a teacher,” Washington said.

None of that ever bothered her son.

“He did not care what those people said. He stood his ground and he did what he wanted to do,” Washington said. “He never said, ‘Maybe I can’t do this. Maybe I can’t go to college.’ He never once said that. He spoke about what he believed in, and he did just that. I’m so proud of him.”

Once he graduates in the spring, Dennis will enter his second year as an African American Teaching Fellow. According to the local program, for every 122 students in Charlottesville and Albemarle County, there is just one African American teacher.

“The program provides professional, social and financial support to fellows,” he said. “It provides me with mentors as well as prepares me as I enter the teaching profession. After I graduate in May, I will be teaching in the Charlottesville-Albemarle area.”

UVA’s second class of Piedmont Scholars was named this summer and matriculated last week. There are nine people, three of whom are siblings. Dennis met with some of the new scholars earlier this week at an orientation meeting.

“I just want to welcome them and be as helpful as I can as they get acclimated to UVA, like I did last year,” he said.

What’s the True Story of Brooks Hall? This Architectural Historian Has the Answer END_OF_DOCUMENT_TOKEN_TO_BE_REPLACED

At UVA, There Is a Club for Everyone END_OF_DOCUMENT_TOKEN_TO_BE_REPLACED