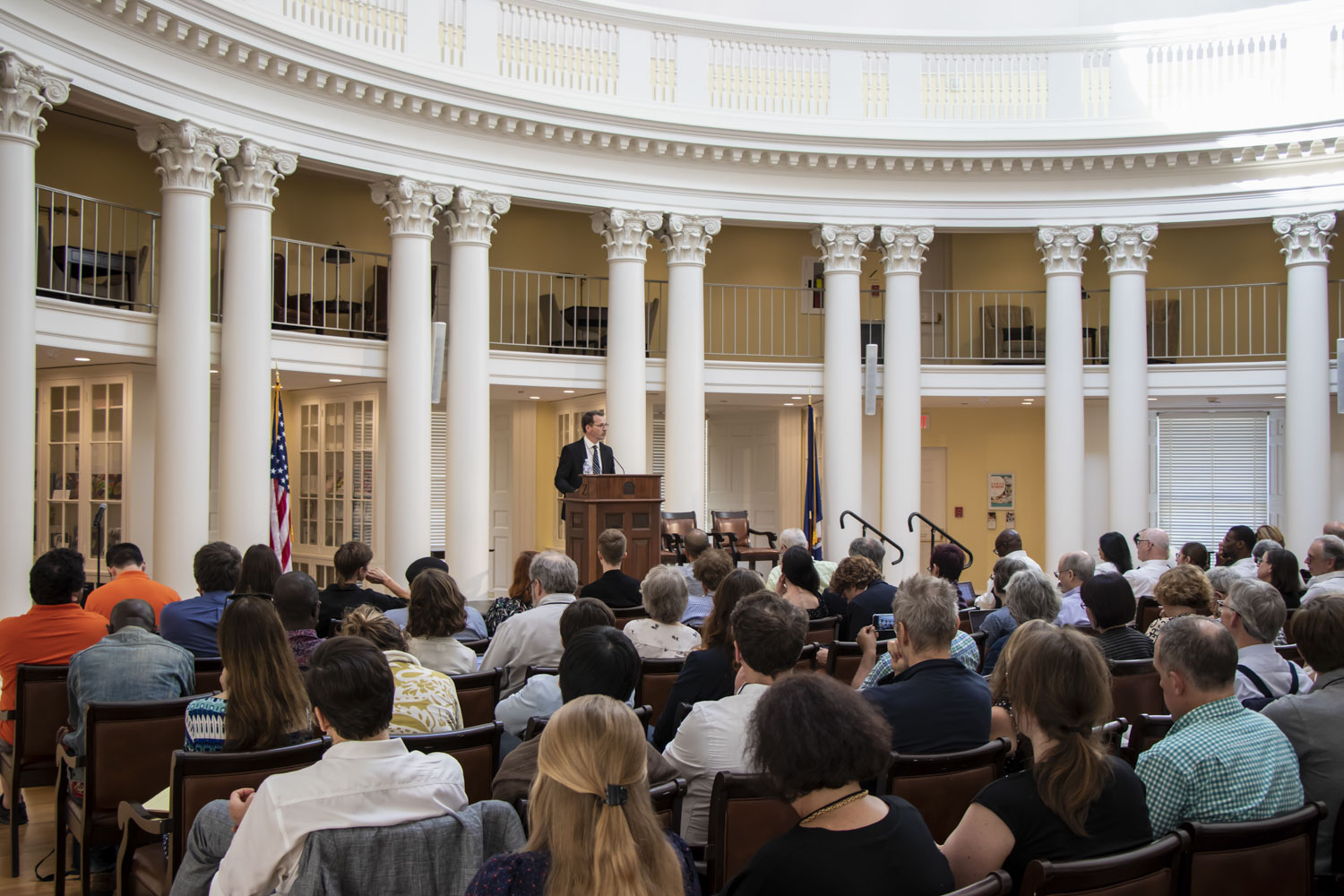 Historians, political theorists, literary and media scholars and other humanities scholars from around the world gathered last week at the University of Virginia for a conference examining how big data and the new frontiers of new media technology introduced by Facebook, Google and other global companies have shaped and penetrated our daily lives.

Hosted by the College and Graduate School of Arts & Sciences’ Institute of the Humanities and Global Cultures, the “Humanities Informatics” conference drew more than 220 international scholars to Grounds for the annual meetings of the Consortium of Humanities Centers and Institutes, a global professional body with more than 200 humanities centers from around the world.

The scientific field of informatics is concerned with the representation, processing and communication of information in natural and engineered systems. It’s also a field with a reach that has expanded well beyond the realms of science and engineering.

Welcoming conference attendees at last Thursday’s introduction in the Dome Room of the Rotunda, Institute of the Humanities and Global Cultures Director Debjani Ganguly contrasted the conference’s prepence with how UVA’s last academic year began “under the shadow of the infamous march” by white supremacists and neo-Nazis on the Lawn last August.

“Over 200 humanists from around the world are assembled today on the Lawn of UVA,” she said. “What could be a more fitting response to the vile march with which our academic year began?”

Arts & Sciences Dean Ian Baucom, a member of the consortium’s International Advisory Board and a former president of the organization, told this year’s conference-goers that the consortium’s annual meetings are “destined to have an impact worldwide.”

“Because of the intellectual rigor and intensity of the conversations that unfold over a sequence of days, whether in Charlottesville, Cape Town, London, Hong Kong, Madison or Edinburgh; and because of the global diversity of academies, networks, situated-knowledge-practices, and institutional forms we collectively represent; we can have a magnifying, distributive impact as each of us returns to our own home institutions, at over 250 universities in over 40 countries.”

Saturday’s panel discussions included one titled “Information Wars, Impossible Democracies,” featuring Siva Vaidhyanathan, UVA’s Robertson Professor of Media Studies, and Jonathan Albright, the research director at the Tow Center for Digital Journalism at Columbia University. While Albright’s presentation focused on YouTube and Vaidhyanathan’s on Facebook, both examined how, in addition to the benefits they bring to society, these tech-turned-media companies can be used to spread misinformation and propaganda, disrupting democracy and scrambling our sense of time, place and knowledge about the world.

Scholars can try to hold these companies to account by shining a light on these processes with research that has policy implications, Albright said. “Our ability to inform ourselves as citizens has been diminished,” he said, and stressed that the disciplines of archive studies and library science are more important than ever. 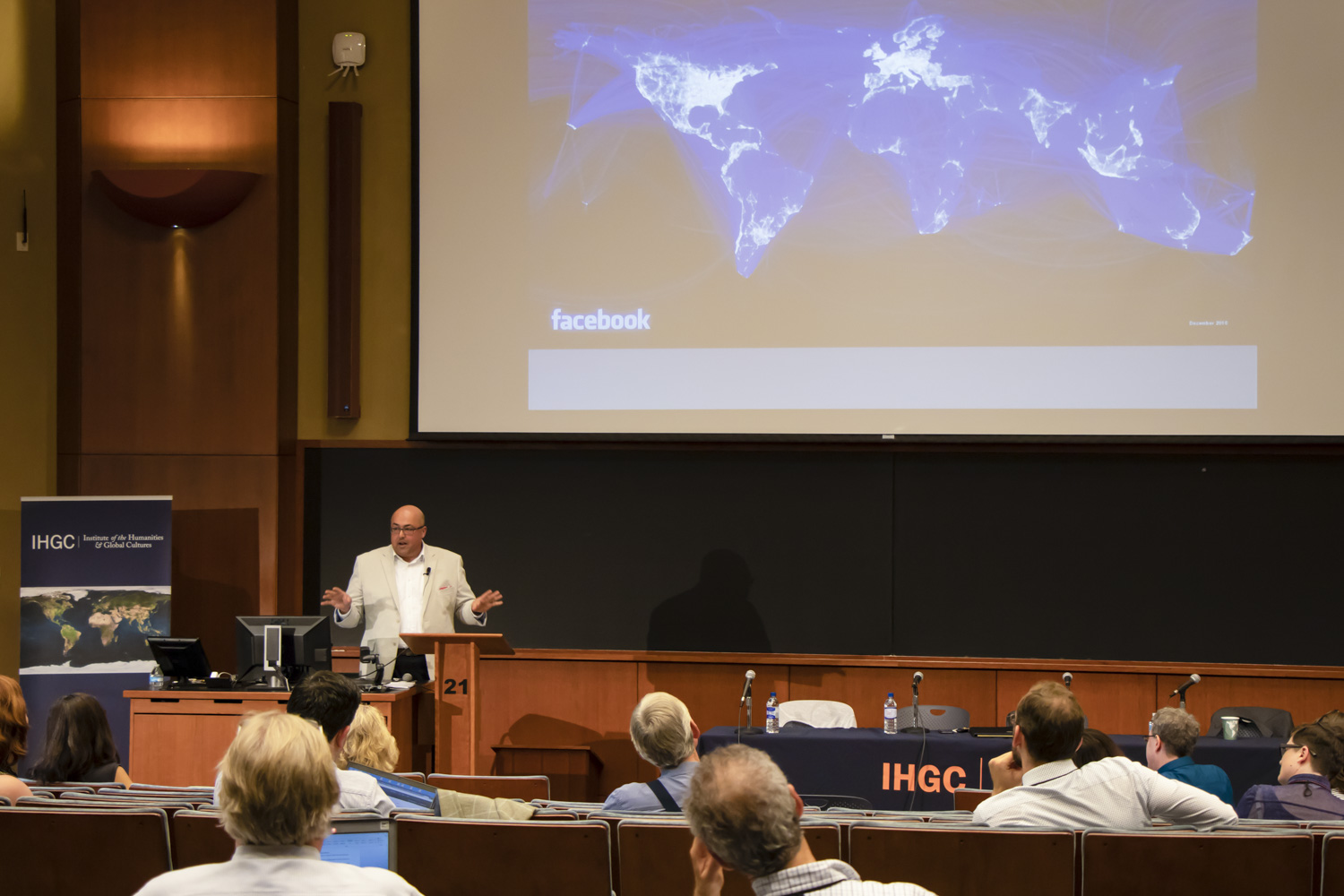 Vaidhyanathan began his talk, “Antisocial Media: How Facebook Disconnects Us and Undermines Democracy” (which is also the title of his new book, published last week), with a bleak declaration: “There is almost nothing anyone can do about anything Jonathan and I are talking about,” he said. “That is where the evidence points to, and I am not sleeping well at night.”

The first issue, Vaidhyanathan pointed out, is that Facebook is growing worldwide. Facebook has plateaued with 220 million regular monthly users in the U.S., but it is still growing internationally, with 2.2 billion monthly users worldwide. “Those numbers are too big to govern,” he said.

“Sober, thoughtful, and deep analytical thinking sinks like a stone on Facebook,” he said. “If this lecture were to be posted, no one would watch it.”

Authoritarian leaders around the world have taken advantage of Facebook’s tools to spread propaganda through targeted ads, winning elections and causing harm to minority groups. Many people in Myanmar, for instance, use only Facebook to get all of their information online, Vaidhyanathan said, and hate speech against Rohingya refugees has spiked in the past year on the platform.

What can scholars in the humanities do in this moment? Vaidhyanathan said the consortium’s conference is one solution – connecting with people in the social sciences, computer sciences and journalism, taking the time, as Hannah Arendt said, to stop and think.

“I occasionally have the chance to talk to people from Facebook and I tell them to pay attention to sociologists and anthropologists, and maybe to go to grad school,” Vaidhyanathan said.

“It is crucial that this conference ends with a panel on that racist assault on the idea of democracy that lies at the heart of the idea of the University,” Baucom said at the beginning of the conference. “… One of our core tasks is not to see that panel as a panel apart from the remainder of the conference, but as a necessarily culminating panel, informed by all our conversations between now and then. Which means neither reducing the present life of racism and the present politics of violence to the digital, nor disregarding the viral powers of the digital, of the informatic, to metastasize the viruses of racism and violence long resident in our various bodies politic.”

Class of 2020: Memories and Moments From a Long-Anticipated Celebration END_OF_DOCUMENT_TOKEN_TO_BE_REPLACED