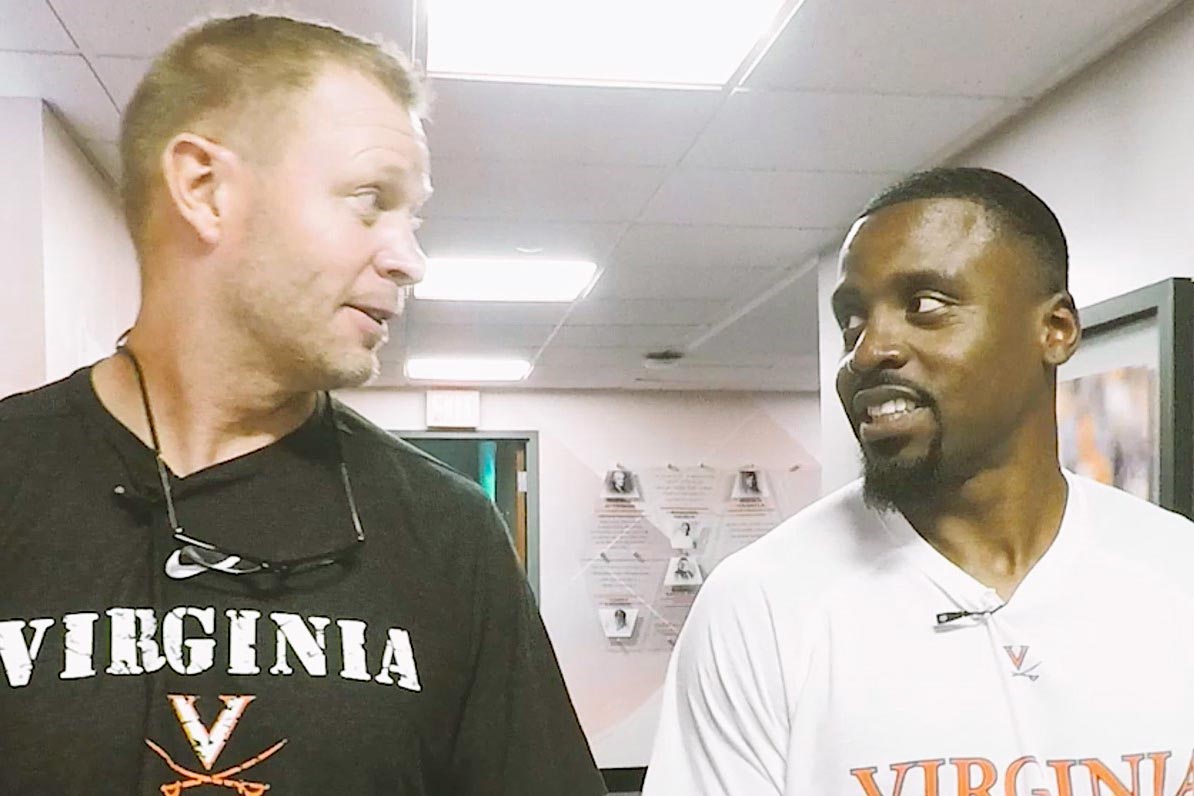 To an older generation of University of Virginia football fans, he’ll always be remembered for “The Catch,” the 47-yard touchdown reception against Virginia Tech that capped the Cavaliers’ epic comeback at Lane Stadium in 1998.

To the current generation, he’s the guy who hosts “The Walkthrough,” a lively series of interviews with UVA football players, alumni and coaches that is posted on UVA social media accounts and on VirginiaSports.com. He was the sideline reporter for Virginia’s football game at North Carolina State last month, and he hosts podcasts, makes appearances on local radio and TV stations, and records video scouting reports with Dave Koehn, the voice of Cavalier football.

All of which keeps Ahmad Hawkins – aka “the Ball Hawk” – regularly in the public eye. But his most important work takes place away from the cameras and microphones, at the Lugo-McGinness Academy on 11th Street in Charlottesville.

“He’s a very special person,” said Jill Dahl, head of Lugo-McGinness, an alternative school for at-risk students. “He’s good with the kids, and with the adults.”

Hawkins, 39, is in his fourth year as a behavior intervention specialist at Lugo-McGinness, which has about 25 students in grades 9 to 12 this school year.

“I always say I get to look in the mirror every day, because I was one of those kids,” Hawkins said. “Once my parents divorced when I was 6, my mom tried to do what was best for her, as far as getting a business degree and bettering her life, and I was kind of left in the cracks.”

A 1997 graduate of Hampton High School, where he was a four-year starter and part of two state championship teams under legendary coach Mike Smith, Hawkins spent much of his childhood in nearby Newport News.

“By the time I got to high school I was fine,” Hawkins recalled. “I made honor roll and got good grades. My trouble years were my elementary and middle school years.

“I was running in the streets and doing a lot of dumb stuff. I never got caught by the law, so that was a blessing right here. But I used to fight and steal and just do crazy stuff, now that I look back on it.”

Hawkins and his wife, Kristal, have a 12-year-old daughter, Kaydence, who attends Sutherland Middle, and an 8-year-old son, Ahmad Jr., at Baker-Butler Elementary.

“I can’t imagine my kids doing what I was doing at that age,” Hawkins said. “It would terrify me.”

“He was always very quiet and mysterious,” Dahl said. “He didn’t speak a lot. In the short time I’ve worked with him this year, he’s still a quiet guy, but there’s something about that quietness that brings out some of our toughest kids.

“He can connect them in ways that don’t make sense to anybody else. He’s quiet and calm. He doesn’t get ruffled, and I think the kids respond really well to that.”

When he was in elementary school, Hawkins said, a lot of his teachers “thought I was just a knucklehead and I would never be anything.” But there were exceptions. Hawkins remembers a fifth-grade teacher who challenged him. He resented it then, but later came to appreciate her interest.

“She was invested in me,” Hawkins said.

He’s similarly committed to the students at Lugo-McGinness, many of whom are dealing with tough circumstances at home.

“They’re from troubled homes, single-parent homes, with a lot of chaos going on,” Hawkins said.

“They’re not getting their needs met in that big population, so they send them to our school for that one-on-one [attention],” Hawkins said.

Dahl said Hawkins, when he deems it appropriate, will share parts of his story, including the struggles he had growing up, with his students.

Hagans, a standout quarterback, wideout and return specialist for the Wahoos, now coaches the Cavalier receivers. He’s been friends with Hawkins since they were boys.

“It’s been a cool thing to have him here in Charlottesville,” Hagans said.

Hawkins played receiver for his first three seasons at UVA and then, at his request, moved to cornerback in 2000.

His most memorable play, of course, came at wideout. Virginia, which trailed 29-7 at halftime, rallied to defeat the Hokies 36-32 on Nov. 28, 1998. Hawkins teamed with quarterback Aaron Brooks on a 47-yard touchdown pass with 2:01 to play, completing a comeback destined to live forever in UVA lore. 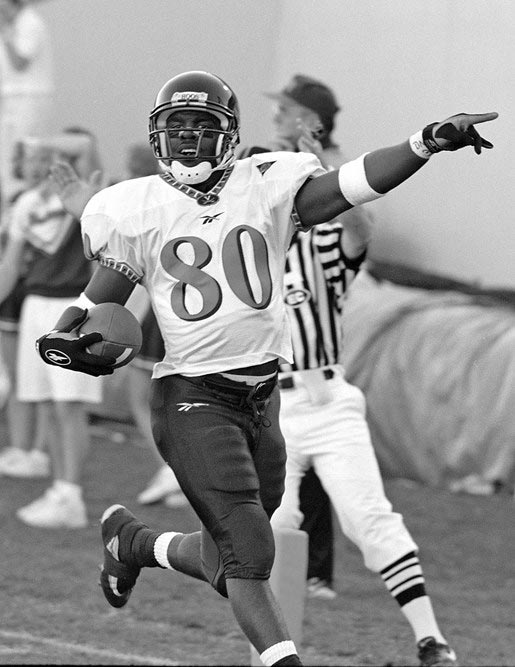 Hawkins went undrafted in 2001, but signed a free-agent deal with the Atlanta Falcons, where he roomed during training camp with his friend, former Virginia Tech quarterback Michael Vick.

“I did real well in camp,” Hawkins said. “They did a write-up on me about how many times I got my hands on the ball. That was the first time I was called a ball hawk.”

The Falcons ended up cutting him, but he signed with the Kansas City Chiefs and spent the 2001 season on their practice squad.

In 2002, Hawkins played for the Berlin Thunder in NFL Europe, after which he spent a decade in the Arena Football League, often as a two-way player. He helped the Colorado Crush capture the AFL title in 2005 and later played for the Nashville Kats, the Grand Rapids Rampage, the Alabama Vipers and the Georgia Force.

He retired in large part, Hawkins said, because “I just got tired of leaving my family.”

Hawkins and his wife were living in Denver when their daughter was born. In 2007, they relocated to Charlottesville, Kristal’s hometown, so she “could be with her family while I was gone,” Hawkins said. “It was better for her.”

In 2009, at his wife’s urging, Hawkins finished work on his bachelor’s degree in religious studies. He’d left UVA in 2001 without fulfilling his foreign-language requirement, but a summer at the Spanish House on Grounds took care of that.

Kristal Hawkins, a former basketball standout at Charlottesville High, is a manager for State Farm Insurance, and Ahmad Hawkins worked there for two years after his football career ended.

“Then I got a call about a position at the alternative high school, working with kids who were just like me growing up,” Hawkins said, “and I jumped at it.”

In addition to raising a family and working at Lugo-McGinness, Hawkins stays busy following and talking about UVA sports. He offers commentary on local media outlets and, during football season, records weekly video interviews with players and, occasionally, a coach or athletics department official.

The Cavaliers’ athletics director, Carla Williams, has joined Hawkins on “The Walkthrough.” So has head football coach Bronco Mendenhall.

“Just a positive presence,” Mendenhall said Monday when asked about Hawkins. “I love being around positive, optimistic people that have a mindset of achievement, with a moral structure of kindness and decency.”

The McCue Center is home again for Hawkins. To have a role in the football program is “rewarding,” he said. “It’s cool, because I want to sow that seed in the next generation [of former Virginia players]. I remember being here and having guys who went to the NFL come back.”

Hawkins doesn’t hesitate to voice his opinions on social media, and occasionally his takes are “too strong for some people,” Hagans said, laughing. “But one thing you can’t deny, he’s unconditionally loyal to our program.”

Hagans used to play basketball with Hawkins twice a week at North Grounds Recreation Center. Hagans gave up those pickup games a couple of years ago, but he still sees Hawkins frequently and supports his longtime friend’s efforts to improve the lives of local youths.

“Everybody knows him; everybody embraces him,” Hagans said. “He’s committed to making the community better.”