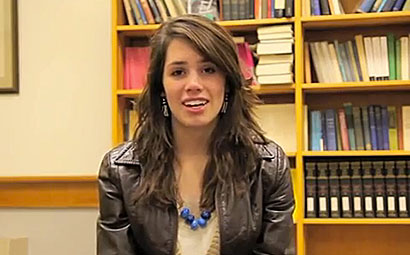 In the United States, only 13 percent of Native Americans have earned a bachelor's degree or higher, well below the national average of 27.9 percent. At the University of Virginia, less than 1 percent of the student population is Native American.

Now Virginia colleges, in collaboration with the Virginia Indians Pre-College Outreach Program based at Virginia Tech, are trying to recruit more Native Americans to institutions of higher education.

As part of that effort, the U.Va.'s Multicultural Student Services program has compiled a two-phase video series to inform American Indian youth about college life and admissions.

The first phase of videos, divided into six parts averaging about four mintues in length, has been posted online and focuses on student life in college. Through interviews with American Indian students at several different Virginia colleges and Valerie Gregory, associate dean of admission at U.Va., the videos seek to give Virginia Indian youth an idea of what to expect from institutions of higher learning.

Julie Roa, multicultural student services coordinator in the Office of the Dean of Students, said that the video series was conceived at the Virginia Indian Nations Summit on Higher Education, an annual meeting between college representatives and tribal leaders held at U.Va., Virginia Tech or the College of William & Mary.

"The idea came up that it would be good to show and not just tell what life is like at college," Roa said, "and so we put the videos and interviews together."

Rising second-year student Aaron Lu, a multicultural program intern, designed and edited the videos under Roa's direction. Over the course of last winter, Lu contacted Native American student organizations at several Virginia colleges to help him record interviews with Native American students, who answered questions such as "How do you feel about the community in college?" and "Why did you choose a college education?" Lu presented the final product in March at the higher education summit, held at U.Va.

The videos have been shown throughout the summer at powwows and camps hosted by the Virginia Indians Pre-College Outreach Initiative, where tribal leaders, college representatives and current college students encourage Native American youth to consider applying to college.

"We have set a very clear goal of this video initiative at the very beginning of the project, which is to send a message of welcome and provide essential college-preparation information for Native American high school students and their parents," Lu said in an email.

The second phase, set to be completed by the start of the new school year, will include interviews with tribal leaders, parents and university professors explaining why it is important to receive a higher education degree. It will also explain the admission process in greater detail, elaborating on Gregory's earlier video, which went over basic admissions information.

U.Va. is also stepping up its effort to lure top American Indian students to Grounds.

The University is revitalizing the Oliver Linwood Perry Jr. Scholarship, to be awarded each year to one incoming student. The four-year scholarship, originally awarded to Native American students, was shelved after a Supreme Court decision rendered race- and ethnicity-based scholarships illegal, said Megan Raymond, director of academic community engagement. The newly amended scholarship language designates it specifically for U.Va students who have "demonstrated a history of service with Native American communities" and will be awarded according to the following order of preference: first to students from Virginia, then those on the East Coast, and last within the United States, Raymond said.

U.Va admission counselor Jason Puryear said the scholarship honors Perry's intent and maintains the values of the original scholarship by awarding those who serve the community Perry cared about so much.

"Mr. Perry wanted to do all that he could to help Virginia's Native Americans," Gregory said. "One of the best ways to improve the community is through higher education, and the best way to encourage that is through financial support."

The amended scholarship is broader, but still emphasizes tribal connections and improvement of the Native American community, she said. It can also continue to encourage young American Indians to pursue higher education. "Even people who are involved in service with the tribes can also help us to recruit more Native Americans," she said.

Currently less than 1 percent of the U.Va student body is Native American, Roa said, a statistic the video initiative and the return of the Oliver Linwood Perry Jr. Scholarship hopes to change.

Monkeypox Is Spreading, But University’s Risk Believed To Be Low END_OF_DOCUMENT_TOKEN_TO_BE_REPLACED

This Alum Is Living His Best Life on the Road, One State at a Time END_OF_DOCUMENT_TOKEN_TO_BE_REPLACED

These Giant Wind Turbines, Inspired by Palm Trees, May Be the Future of Renewable Energy END_OF_DOCUMENT_TOKEN_TO_BE_REPLACED