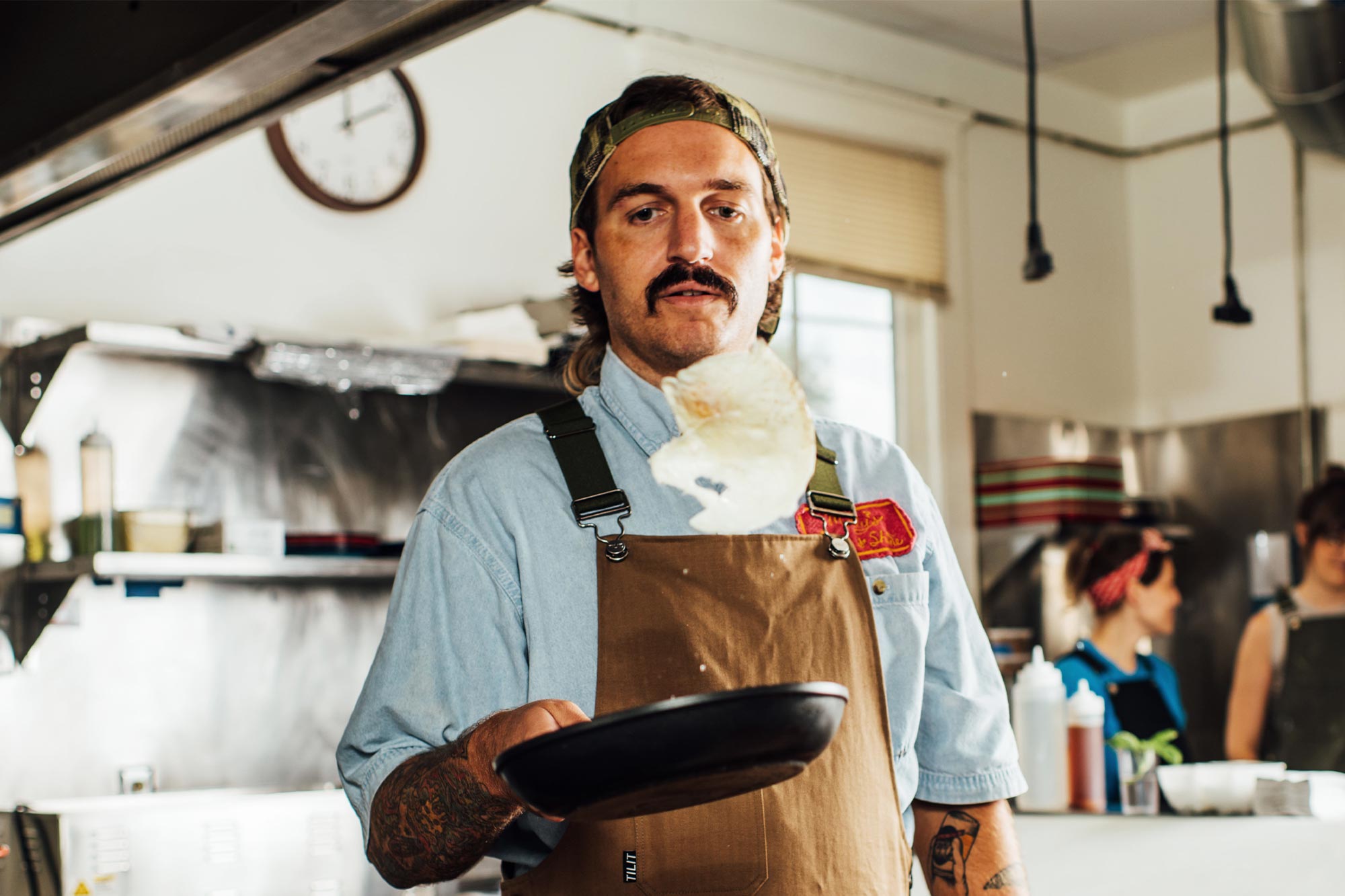 Mason Hereford grew up in Charlottesville and, as a UVA student, grew to love the variety of sandwiches and burgers from local restaurants. He took his quirky culinary style to a reality cooking show on Netflix. (Contributed photo)

Mason Hereford kicked off the most recent Netflix season of “Iron Chef: Quest for an Iron Legend.” He and other challengers competed against veteran chefs in a reality-show cooking competition, where they had to overcome surprise culinary challenges.

Hereford, who grew up in Charlottesville and graduated from the University of Virginia in 2008, isn’t the kind of typical “chef” you’d expect from central casting. The bespectacled and mustachioed restaurant owner with a prominent mullet is all about creating delicious and interesting sandwiches instead of complicated multi-course meals.

Sadly, Hereford was edged out of the competition by celebrity chef Curtis Stone. But he’s a winner in our book.

He owns a pair of New Orleans restaurants – The Turkey and the Wolf, and Molly’s Rise and Shine – where the local newspaper quoted his cooking style as “playful, occasionally funny.”

But, he says, his love of sandwiches can be traced back to this time on Grounds and the Charlottesville sandwiches that inspired him.

Like any sandwich maker, Hereford is always in a hurry, so we shouted four quick questions at him like a lunch-counter server.

Q. How did your experience at UVA and living in Charlottesville set you up for the opportunity to own a pair of popular restaurants?

A. I imagine I needed those good, good UVA writing skills to write a business plan to convince people to loan me some money to open a restaurant.

Also, all those sandwich shops in Charlottesville really put the idea in my head that New Orleans had room for a sandwich joint that wasn’t focused on po’ boys.

One of our sandwiches that’s been on our menu since Day One is based on the Jefferson at the Bellair Market on Ivy Road – the one with herbs, mayonnaise and cranberry. Also, we run a burger that probably wouldn’t exist if I hadn’t spent so much time at Riverside. (That’s Riverside Lunch at 1429 Hazel Street.)

Q. What was it like to film, work and cook with “Iron Chef”?

Q. What’s your favorite meal to cook at home?

A. Anything with hot peppers or anchovies. Also, I eat a lot of ice cream with Cheez-Its on top.

Thanks for taking our questions, Mason. His much-anticipated cookbook, “The Turkey and the Wolf: Flavor Trippin’ in New Orleans,” just went on sale after an unexpected delay.

The original copies were being sent to the U.S. on a container ship. But in rough weather, the container carrying the books went overboard, and the first run is now at the bottom of the Atlantic Ocean.

When Less Is More: How Harnessing the Power of Subtraction Can Add to Life END_OF_DOCUMENT_TOKEN_TO_BE_REPLACED