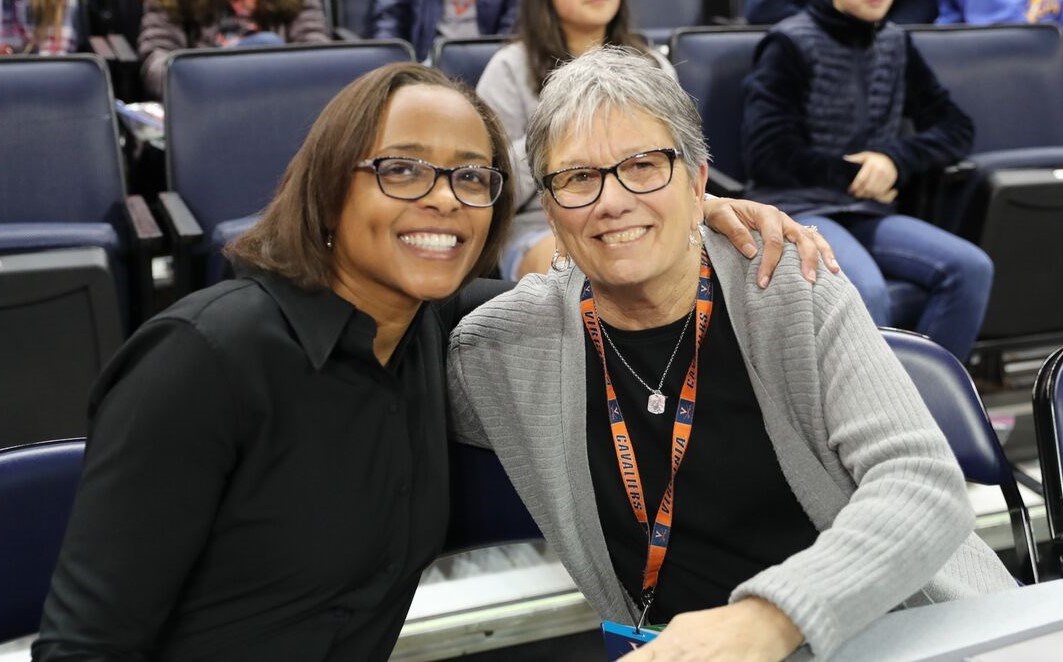 She grew up in Easton, Massachusetts, outside of Boston, and earned her bachelor’s degree from Northeastern University. And so when Jane Miller arrived at the University of North Carolina, Greensboro in the late 1970s to pursue a master’s, she experienced culture shock.

“When I first went to the South, I thought, ‘I am not going to last down here,’” Miller said. “The pace was so slow, and I was definitely a Bostonian.

“I thought I’d never stay, and then the sun came out and I was on the golf course in January and February, and I thought, ‘You know, this might be an OK place to set some roots down.’”

The University of Virginia is thankful for that change of heart. In 1983, Miller left what was then Longwood College to become UVA’s head coach in two sports: field hockey and women’s lacrosse.

In 1992, after giving up her position with field hockey, Miller became an assistant athletic director and senior woman administrator at Virginia. Craig Littlepage, then associate athletic director at UVA, believed Miller would thrive in those roles. That he was correct soon became apparent.

“After two to three years, it was clear that Jane was a natural leader and had great credibility with our coaches,” he said.

Miller continued coaching women’s lacrosse until 1995, when she moved into athletic administration full-time at UVA.

“The thing that impressed me early on was that Jane gave the head coaches of our Olympic sport programs the one-on-one attention and supervision at a level not previously offered,” Littlepage said. “She took pride in being there on a daily basis to listen to concerns and to assist whenever she could, helping these programs develop ways of excelling at higher levels of success, both competitively and academically.”

“You’d be hard-pressed to find somebody I think more highly of than her,” said Allen Groves, who’s worked closely with Miller in his 12 years as the University’s dean of students.

Miller’s official tenure at UVA has entered its final chapter. She announced Tuesday that she’ll retire as the end of the 2018-19 athletic year. Under head coach Brian O’Connor, Virginia’s baseball program has made four trips to the College World Series, and Miller wouldn’t mind bowing out in Omaha, Nebraska.

Before making her retirement plans known publicly, Miller told the coaches with whom she works directly, including O’Connor, who guided the Cavaliers to the NCAA title in 2015.

“I said, ‘No pressure, Brian, but I sure would love to go to the World Series again,’” Miller recalled, smiling.

Her first office at UVA was in Onesty Hall, which, like University Hall, to which it’s connected, will be torn down next year.

“It was basically a closet,” said Miller, whose current office, in the McCue Center, is considerably more spacious.

In the early ’80s, UVA’s entire athletics department was based in U-Hall and Onesty Hall. Staffers are now spread among several facilities, including the McCue Center, John Paul Jones Arena, the Aquatic and Fitness Center, Memorial Gymnasium, the McArthur Squash Center and Birdwood Golf Course.

“For the longest time, we tried to keep people together,” Miller said. “We really resisted letting them go out on the fringes, so to speak, in different facilities. But now it’s just a matter of being efficient for them, especially when we have these tremendous facilities and that’s where their recruits want to go and what they want to see.”

“They’re all very different,” Miller said. “Dick Schultz was a very quiet, reserved man. Jim Copeland was just top-notch. He was just a wonderful man to work with. I became an administrator during Jim’s time as an athletic director here.

“Terry was the first coach to walk through my door over at Onesty Hall, to welcome me to the University, and that speaks to what a gentleman he is.

“Craig’s been my mentor, my friend, my colleague, for years, and someone who’s just really special. And then I’m just thrilled for our department that Carla Williams is our athletic director. She’s going to do great things here. She’s a great relationship-builder, she understands coaches, she understands student-athletes, she’s inclusive.”

Williams said: “Before I even got to Virginia, I knew about Jane Miller. She’s of those leaders at the NCAA level who’s meant a lot to all of college athletics. She was a great coach with field hockey and, especially, lacrosse, and she’s been a phenomenal administrator nationally. Virginia’s been very fortunate to have her, and I’ve been very fortunate to have the chance to work with her.

Miller said she decided a couple years ago to retire at the end of 2018-19.

“However, Carla made the decision hard with all of the exciting plans she has for the department,” she said. “In the end, I need to spend time watching my nieces and nephews play sports, enjoy my family, and reconnect with the important people in my life.”

In nine seasons as the Cavaliers’ field hockey coach, Miller posted a record of 100-65-7, with two ACC regular-season titles and three appearances in the NCAA tournament.

In 12 seasons as head women’s lacrosse coach, she guided the Wahoos to the Final Four six times and won two NCAA titles (1991 and ’93). With a record of 144-44, she’s the winningest coach in program history, and Miller was inducted into the U.S. Lacrosse National Hall of Fame in 2003.

“It was an honor to play for her,” Cherie Greer Brown said. “Jane wasn’t a good coach. She was a great coach.”

Greer Brown’s jersey, No. 18, was the first to be retired in women’s lacrosse at UVA. Then known as Cherie Greer, she was named a first-team All-American three times. In 1994, her final college season, she led the nation in scoring, with 61 goals and 18 assists, and also was named national defensive player of the year.

Miller deserves much credit for her success in college, Greer Brown said. “She knew how to motivate and challenge us, and she really helped me achieve my full potential. She really knew how to build a winning environment.”

Greer Brown graduated from Harriton High School in Bryn Mawr, Pennsylvania. So did Julie Myers, who played two sports for Miller at UVA and, after the 1995 season, was promoted from assistant coach to head coach in women’s lacrosse.

Myers remembers her first conversation with Miller, in the spring of 1986.

“I was 17 years old when she called to say, ‘Do you want to come to Virginia to play field hockey and lacrosse for me?’” Myers recalled. “I was 18 by the time I met her, and [since then] I’ve only been away from her for not even one calendar year.”

After earning her bachelor’s degree at UVA, Myers lived in California for about a year, starting in the fall of 1991. “Then I came back to work for Jane,” Myers said. “I became her grad assistant while I was getting my master’s in education.”

Miller’s impact on Myers has been profound.

“She clearly gave me opportunity on a golden platter, in terms of coming to play for her and being able to learn as much as I could as a player, and then taking me back as a grad assistant was huge,” Myers said. “We think we know a lot more as student-athletes than we really do, and I think it takes that first job to realize how much you have to learn.

“Even when I was a young head coach, she was a great resource without ever over-stepping. She didn’t come in my office to say, ‘Hey, why don’t you do this?’ or ‘What do you think about that?’ She quietly supported me, and I knew she was there, and she’d give me a hug after a big win. She really did a nice job of letting me find my way and letting me do it my way, knowing that I had a great resource right behind my back.”

O’Connor had never been a head coach before UVA hired him in July 2003.

“I felt really fortunate that my supervisor was somebody that had worn the coaching hat before,” he said. “Jane’s been a real mentor to me.”

In his 15 years at Virginia, O’Connor has built one of the nation’s elite programs and overseen the expansion and renovation of Davenport Field, now known as Disharoon Park. Along the way, the ’Hoos developed a large and loyal fan base.

“Those things don’t happen just because you win on the field and you have good players,” O’Connor said. “There’s so much behind the scenes that goes into those things. All of those ideas in their initial stages had been pitched to Jane or were things that Jane and I talked about and said, ‘This is the next step in what we need to do.’

“I’m so grateful to her and for what she’s put into this athletic department, first as a coach and now as an administrator. She’s been an incredible resource for us.”

Miller loved coaching, she said, and “being responsible for putting all the pieces of the puzzle together. But the great thing about working with a multitude of teams is I’ve gotten to know so many student-athletes and work with so many coaches.”

“That was a devasting time for our student-athletes, our coaches, our university,” Miller said.

Groves, UVA’s dean of students, said he vividly remembers calling Miller “and then having her come to the Rotunda, at 3 or 4 in the morning, to sit and talk about what had happened and what we knew.

“I remember how extraordinary she was in such a painful and difficult time for our student-athletes. She was just the consummate colleague to have had in an unbelievably difficult time. Her primary objective was always how to support those student-athletes, the young women and the young men, because both teams were deeply impacted by what had happened with Yeardley’s death.”

Many things make UVA “in my opinion very different and very special,” Groves said, “but one thing that really sticks out is the very close working relationship between athletics and the dean’s office. It’s not like a lot of places, where there’s a very clear wall or division.

“She has always believed that there are high standards for those wearing the colors of the University of Virginia on the athletic field, and she’s been a great colleague with us in trying to make sure that our students understand those standards and live by them.”

Miller plans to remain in Charlottesville after retiring. For that, her colleagues are grateful.

“You really can’t replace 35 years of historical, institutional knowledge, but thankfully Jane will be around and wants to help,” Williams said.

Even when Miller no longer reports to the McCue Center for work, Myers said, she’ll remain an integral part of the UVA family.

A Year We Will Never Forget: 2019-20 in Review END_OF_DOCUMENT_TOKEN_TO_BE_REPLACED

‘What Will You Carry With You?’ Remarks From UVA President Jim Ryan END_OF_DOCUMENT_TOKEN_TO_BE_REPLACED