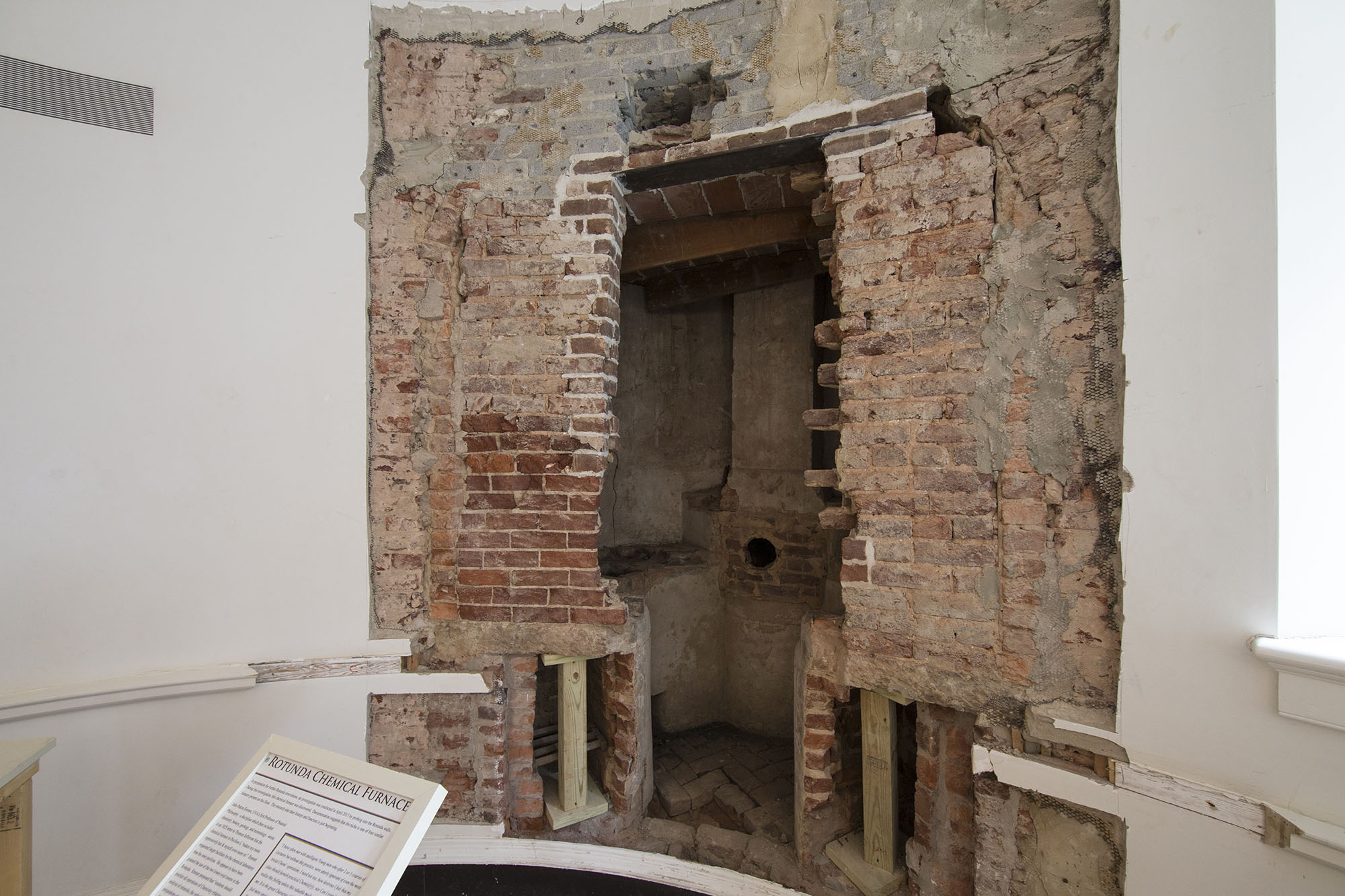 The University of Virginia’s Rotunda still has its secrets, as conservators are discovering amid the building’s ongoing two-year renovation.

One of them is a chemical hearth, part of an early science classroom. It had been sealed in one of the lower-floor walls of the Rotunda since the 1850s, and thus was protected from the 1895 fire that destroyed much of the building’s interior. Two small fireboxes of the hearth were uncovered in a 1970s renovation, but the hearth itself remained hidden until the current round of renovations. When preparing for the current renovations, workers examined some of the cavities in the walls and found the rest of the chemistry hearth.

“It was a surprise, a very exciting one for us,” Hogg said.

Once the renovations are done next spring, the hearth will be part of a permanent display.

In Thomas Jefferson’s original Rotunda, the teaching of chemistry occurred on the Rotunda’s bottom floor – laboratory experiments and demonstrations in the Lower East Oval Room and lectures in the Lower West Oval Room. John Emmet, the first professor of natural history, who collaborated with University founder Thomas Jefferson to equip the space, taught the classes.

The chemical hearth was built as a semi-circular niche in the north end of the Lower East Oval Room. Two fireboxes provided heat (one burning wood for fuel, the other burning coal), underground brick tunnels fed fresh air to fireboxes and workstations, and flues carried away the fumes and smoke. Students worked at five workstations cut into stone countertops.

Brian Hogg, senior historic preservation planner in the Office of the Architect for the University, said the chemical hearth may have been for Emmet’s use; the students may have had portable hearths with which they conducted experiments.

“Back then, the different experiments would get different levels of heat from different sources,” said Jody Lahendro, a supervisory historic preservation architect for U.Va.’s

Facilities Management. “For some, they would put the heat source under a layer of sand to more evenly disperse and temper the heat.”

Jefferson understood the chemistry room would pose special circumstances and proposed, in an April 1823 letter to Joseph Cabell, a member of the Board of Visitors, that the class be located on the ground floor of the Rotunda – a common practice then so that the water required in the experiments would not have to be pumped to the upper floors.

“For the Professor of Chemistry, such experiments as require the use of furnaces, cannot be exhibited in his ordinary lecturing room,” Jefferson wrote. “We therefore prepare the rooms under the oval rooms of the ground floor of the Rotunda for furnaces, stoves &c. These rooms are of 1,000 square feet area each.”

In October 1824, the Board of Visitors determined Rotunda room use, stating the “rooms in the Basement story of the Rotunda, shall be, one of them for a Chemical laboratory; and the others for any necessary purpose to which they may be adapted.”

Emmet, who started teaching at the University in April 1825, was initially given a small room on the north side of the building for his first chemical laboratory. He complained the room was too small to properly dissipate heat, making it too hot from the chemical experiments he was running.

Jefferson agreed in June that year to let Emmet use both of the larger rooms in the Rotunda’s basement for his chemistry classes – one for a laboratory and one for a lecture hall. According to correspondence between Jefferson and Emmet, the professor believed the students needed to be able to perform their own experiments to learn chemistry, not just watch the professor.

“The surviving evidence of the chemical hearth in the Rotunda bears similarities to the range of furnaces in the MacNeven laboratory,” according to a report written by Diane S. Waite for John G. Waite Associates, Architects, the firm that designed the current Rotunda renovations.

In 1827, Emmet pressed the Board of Visitors for a separate chemistry building, a discussion he had first opened – unsuccessfully – with Jefferson. His entreaties to the board got no further than they did with Jefferson, but the board agreed in 1829 to approve some improvements to the Rotunda’s chemistry facilities.

In July 1829, the board directed that the “fire place in the Chemical Laboratory … be altered, so as to improve the draught, in the mode thought most expedient by the Professor of Chemistry.” At the same time, the board authorized a “servant” for Emmet to work around the laboratory for four hours a day, three days a week.

In 1830, the board authorized that a wooden cistern used as a water source for the chemistry experiments be replaced by one made of brick and waterproof lime, and also called for painting and whitewashing the forge. According to the Waite report, in June 1831 Chiles Brand was paid $1.50 for “Work at Chemical Laboratory,” and in the summer of 1838, C.M. Brand was paid $1 for “repairs to hearth and fire-place,” though the location was not given. (“Brand” was a name that archaeologists from Rivanna Archaeology found carved into the hydraulic cement liner of the cistern dug up in 2014 in the east garden of the Rotunda.)

It was around this time, according to the Waite report, that Emmet “discovered that a vein of small pieces of white earth or stone ran through the lands of the University, a few feet below the surface, that on examination proved to be the kaolin earth, of which the best porcelain is made.” He conducted “numberless experiments and schemes of rendering it useful” and “converted it into fire-bricks” and “a cement impervious to water”; it was also used “for covering roofs of buildings.” In 1845, three years after Emmet’s death, it was reported that the “cistern, lined with this same material . . . still remains in the laboratory as a monument of his industry” and “his fertility of invention.”

Emmet died in 1842, at age 47, with some of his failing health attributed to various accidents and mishaps suffered while he was conducting chemical experiments. Robert E. Rogers was appointed his successor.

The chemical hearth may have been closed up in the wall in the mid-1840s when the chemistry laboratory was moved to the southwest wing of the Rotunda.

An annex was added to the north side of the Rotunda Annex in the early 1850s, containing four stories of classroom, laboratory and performance space. The chemistry lab was moved to the ground floor and operated there until the annex burned in the 1895 fire.

The Department of Chemistry now occupies its own building on McCormick Road, with modern lab facilities. But the Rotunda’s hearth provides an important link to the University’s history, highlighting the importance Jefferson placed on studying the natural sciences.

“The hearth is significant as something of the University’s early academic years,” said Mark Kutney, an architectural conservator in the University Architect’s office. “The original arch above the opening will have to be reconstructed, but we hope to present the remainder of the hearth as essentially unrestored, preserving its evidence of use.”

“This may be the oldest intact example of early chemical education in this country,” Hogg said.

When Less Is More: How Harnessing the Power of Subtraction Can Add to Life END_OF_DOCUMENT_TOKEN_TO_BE_REPLACED