Jim Ryan Inaugurated as the University of Virginia’s Ninth President 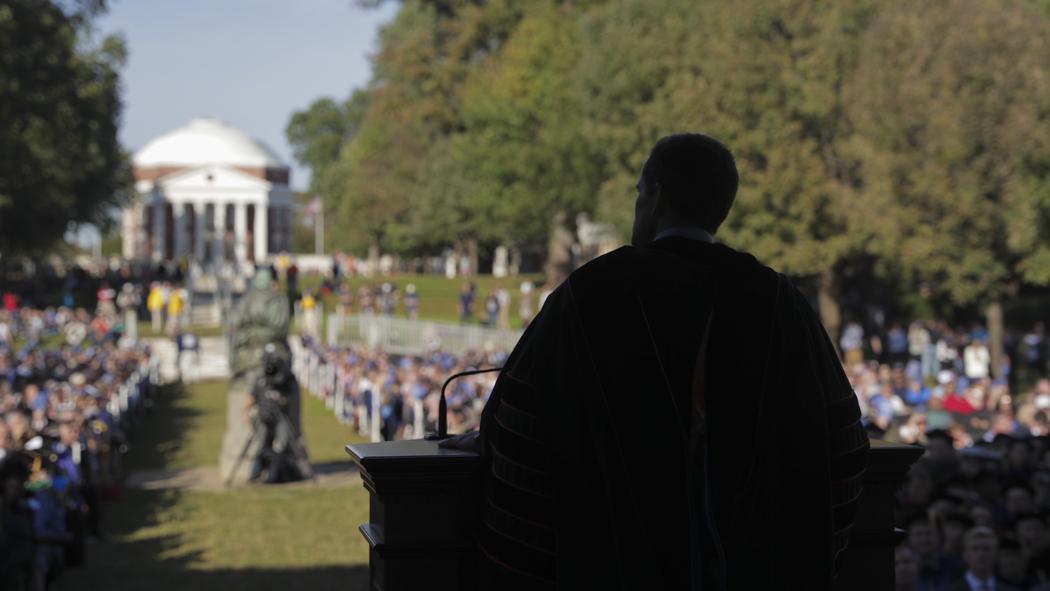 Friday was a special day at the University of Virginia.

It was an important day for the University, as Jim Ryan, like only eight others before him in UVA’s 200-year history, raised his right hand, took the oath of office and officially became president of the University.

It was a memorable day for the students, faculty, administrators and community members on hand to witness the occasion, savoring both a sunny fall day on the Lawn and a slice of history.

And it was an especially meaningful day for Ryan, both personally and professionally. He officially assumed the helm of the University where he earned his law degree and served as a beloved law professor for 15 years. And he did so in front of his wife, Katie, and their four children – Will, Sam, Ben and Phebe – and both his birth and adoptive families, who met for the first time over the weekend. 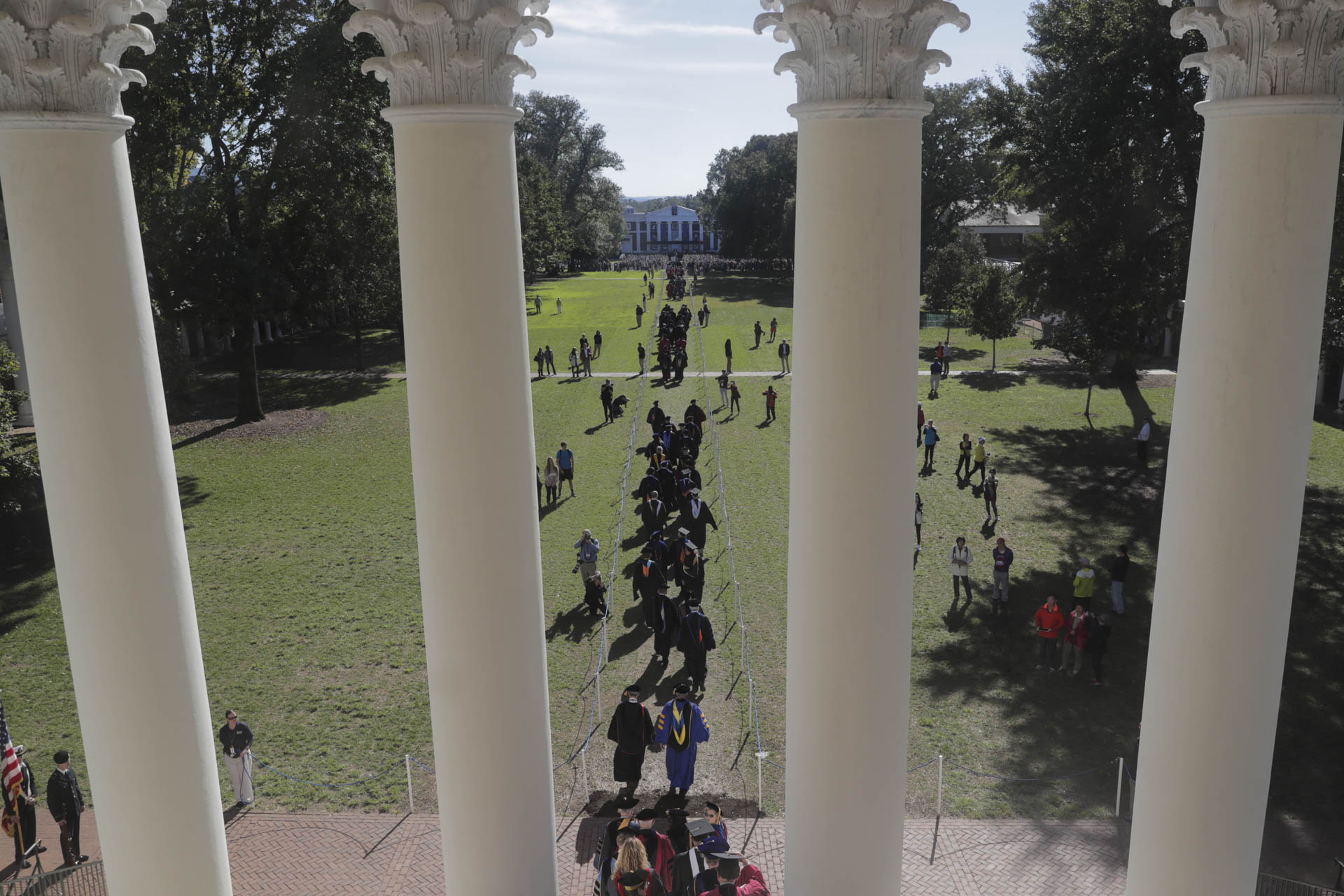 The procession began at the Rotunda and made its way to Old Cabell Hall. (Photo by Sanjay Suchak, University Communications)

Beginning at 3 p.m., Ryan joined scores of deans, faculty members, students and representatives from more than 100 colleges and universities attired in full academic regalia. The colorful procession streamed over the Rotunda steps and down the Lawn to applause from the large crowd gathered to witness the inauguration.

Among the crowd was alumna Kathy Boase, who works at the Law School Foundation and remembered Ryan from his days as a law professor. She said she was looking forward to seeing him in his new role.

“I didn’t want to miss an occasion to celebrate a colleague as he becomes president of this university,” Boase said.

“I think it is important to observe and honor the president of the University of Virginia, which we know as a prestigious institution,” Bruce said from his seat on the Lawn, near where he sat to watch his son graduate from UVA in 2017.

The ceremony, which took place on the steps of Old Cabell Hall, began with the national anthem, performed by the University Singers. After a welcome address from School of Nursing Dean Dorrie K. Fontaine, who will step down as dean at the end of the year, and an introduction from Donna Price Henry, chancellor of the UVA College at Wise, Virginia Gov. Ralph Northam stepped up to the podium. 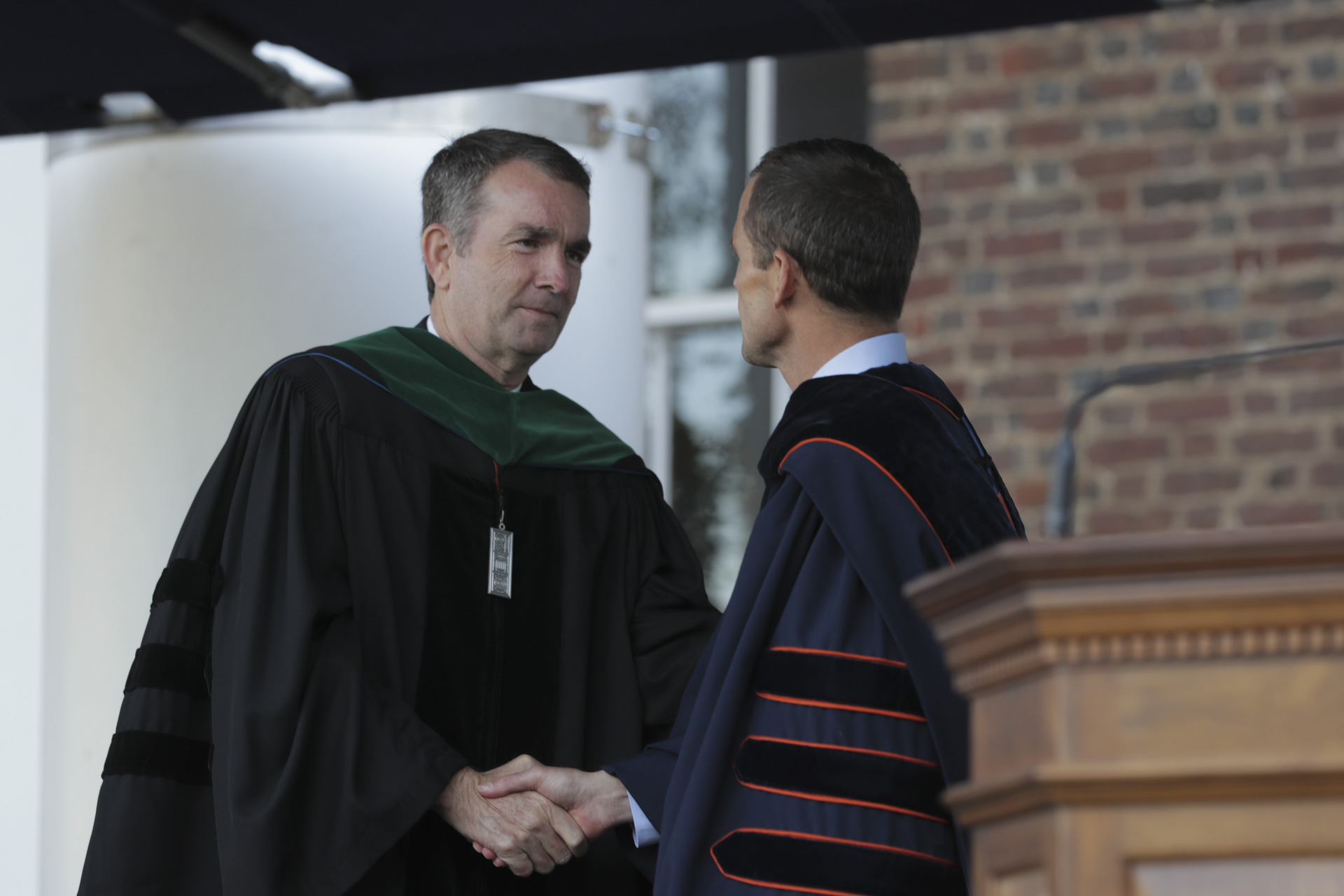 Northam noted that, just over 200 years ago, three U.S. presidents – Thomas Jefferson, James Madison and James Monroe – gathered to lay the cornerstone of the University near Pavilion VII.

“The legacy of scholarship begun then now reaches beyond these Grounds to southwest Virginia and UVA Wise and beyond the borders of our commonwealth, across oceans, crossing barriers of language, culture and natural and political borders all over the world,” Northam said.

The governor praised Ryan’s research on how law and policy affect educational opportunity and expressed confidence in his ability as a leader.

“As President Ryan takes the reins as the University’s ninth president, I am confident that he has the ability, the experience as well as the intellectual curiosity to serve this university well and lead it into the 21st century,” Northam said.

Drew Gilpin Faust, who served as president of Harvard University while Ryan was the dean of Harvard’s Graduate School of Education, praised Ryan as “the perfect president for UVA and for this very challenging moment in higher education.” 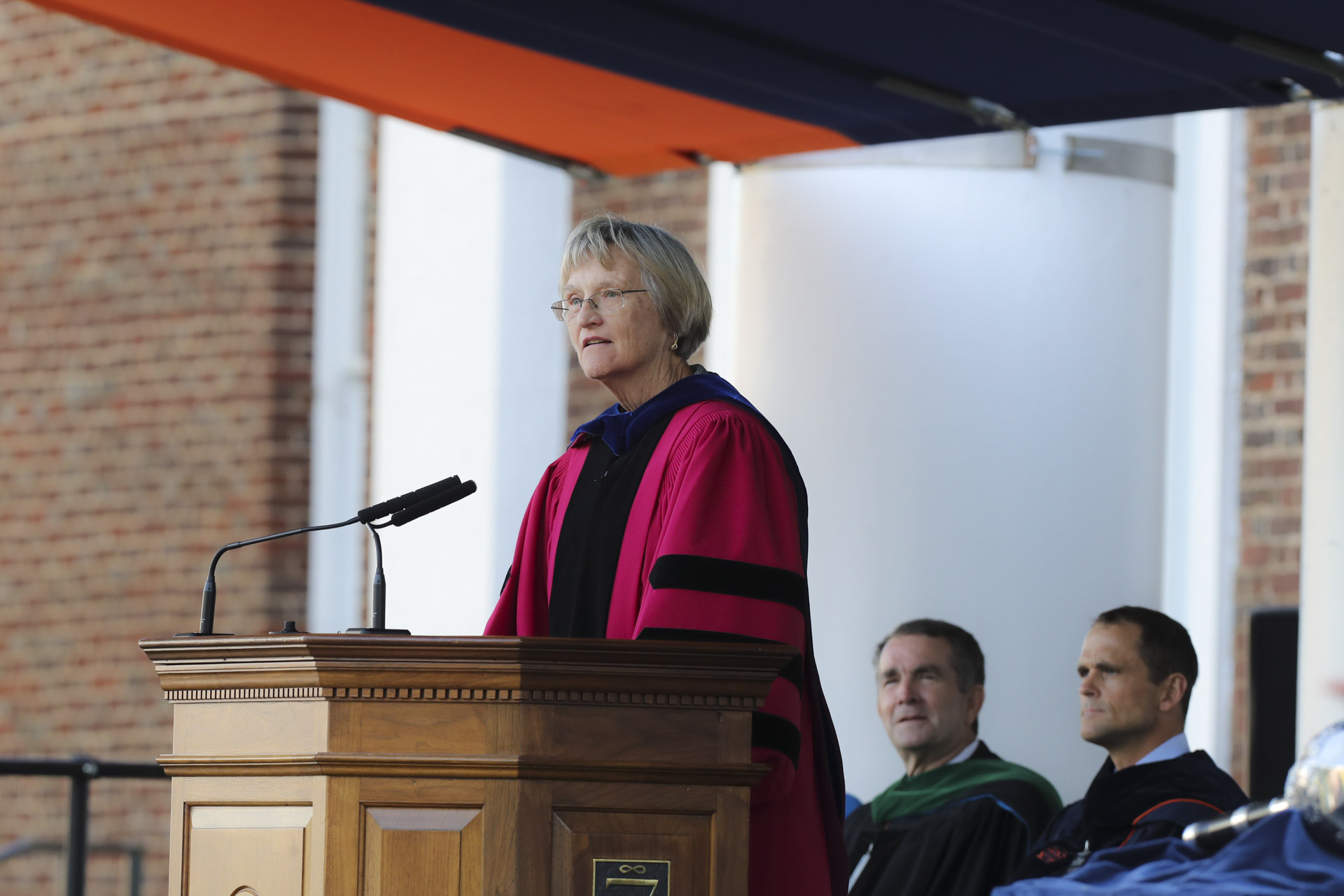 Drew Gilpin Faust, former president of Harvard University and Ryan’s boss there, said she was confident Ryan was perfect for UVA, though she already missed him at Harvard. (Photo by Dan Addison, University Communications)

“Jim is special,” Faust said. “I cannot tell you how many people said those very words to me when I was searching for a dean for our School of Education.”

“Jim has an uncanny ability to build trust, to unite people across divisions and differences and to garner universal respect for his innate integrity and for a dedication that transcends controversies or conflicting interests,” she said. “I was very sad to see Jim leave Harvard, but I was consoled by knowing full well how important it is that he will be leading this university at this time.”

After Faust spoke, Ryan himself rose and raised his right hand to take the oath of office, laying his left on a Bible held by his wife, Katie. UVA Rector Frank M. “Rusty” Conner III administered the oath. 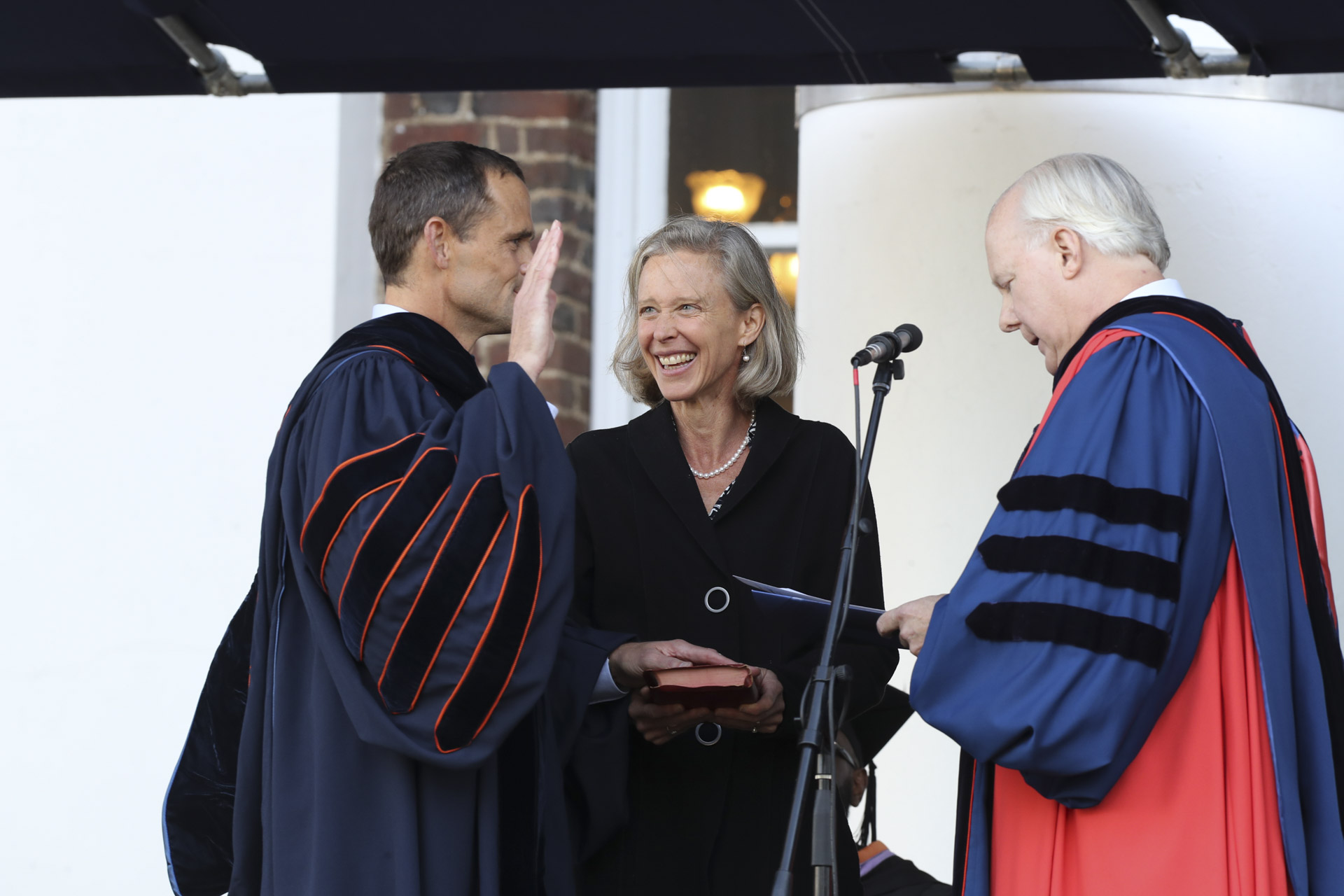 Ryan takes the oath of office as his wife Katie looks on with a big smile. (Photo by Dan Addison, University Communications)

Looking Conner in the eye, Ryan swore to support the constitutions of the United States and the Commonwealth of Virginia and “faithfully and impartially” discharge his duties as UVA’s president, drawing a standing ovation from the crowd.

With that, the new president stepped up to the podium to deliver his inaugural address, “Faith in the Unfinished Project,” laying out his hopes and plans for the University.

A successful university, Ryan said, requires a certain kind of faith – faith that research will lead to progress not currently possible; faith that work students do today will help them become wise leaders tomorrow; faith that faculty and staff members can use their work here to make an impact and change the world.

“This is the grand faith of universities and those who participate in them: faith in the possibility of progress,” Ryan said. “Progress toward a more prosperous, healthier, just and peaceful society, and progress toward lives that are more meaningful, purposeful and passionate.

“This is not, or should not be, a blind faith, but instead a realistic one, even a critical one. It is a faith that understands that progress is rarely linear, it’s often messy, and it’s sometimes impossible to fully grasp in the moment.” 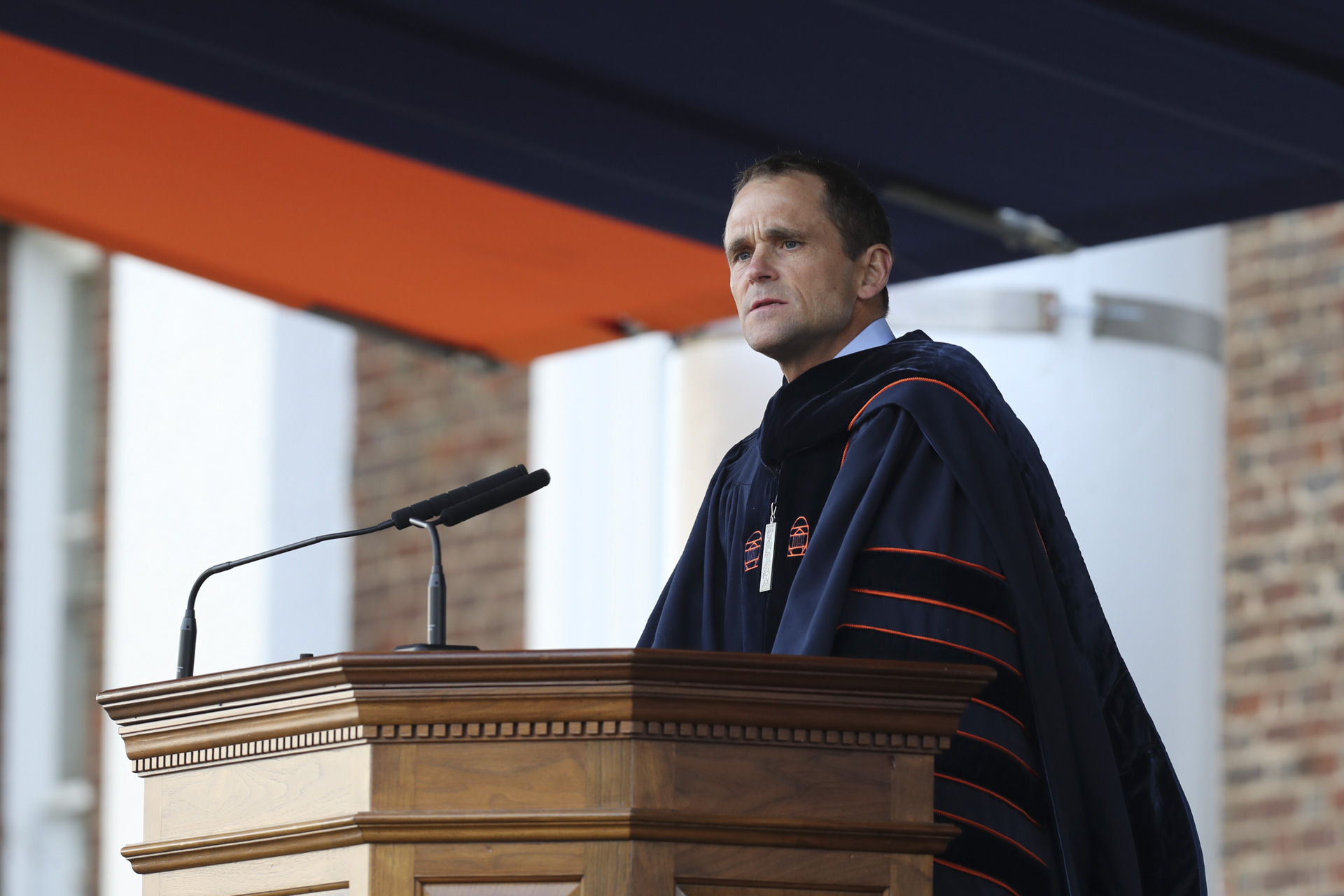 Such faith, Ryan said, demands both an honest assessment of the past and the present and a bold, hopeful vision of the future.

“I know this project we call the University of Virginia is not finished and never will be. I know it’s not perfect, and it never can be,” he said. “But I believe in its fundamental goodness. I believe in its ability to be even better than it is now. I see the brilliance, the kindness, the decency and the progress every day as I walk across the Grounds and spend time with the students, faculty and staff with whom I am lucky enough to share this journey.”

As the University enter its third century, Ryan said, he sees a community that will strive to live out its values, to embrace diverse points of view, and to promote sustainability, social justice, free speech and academic freedom. 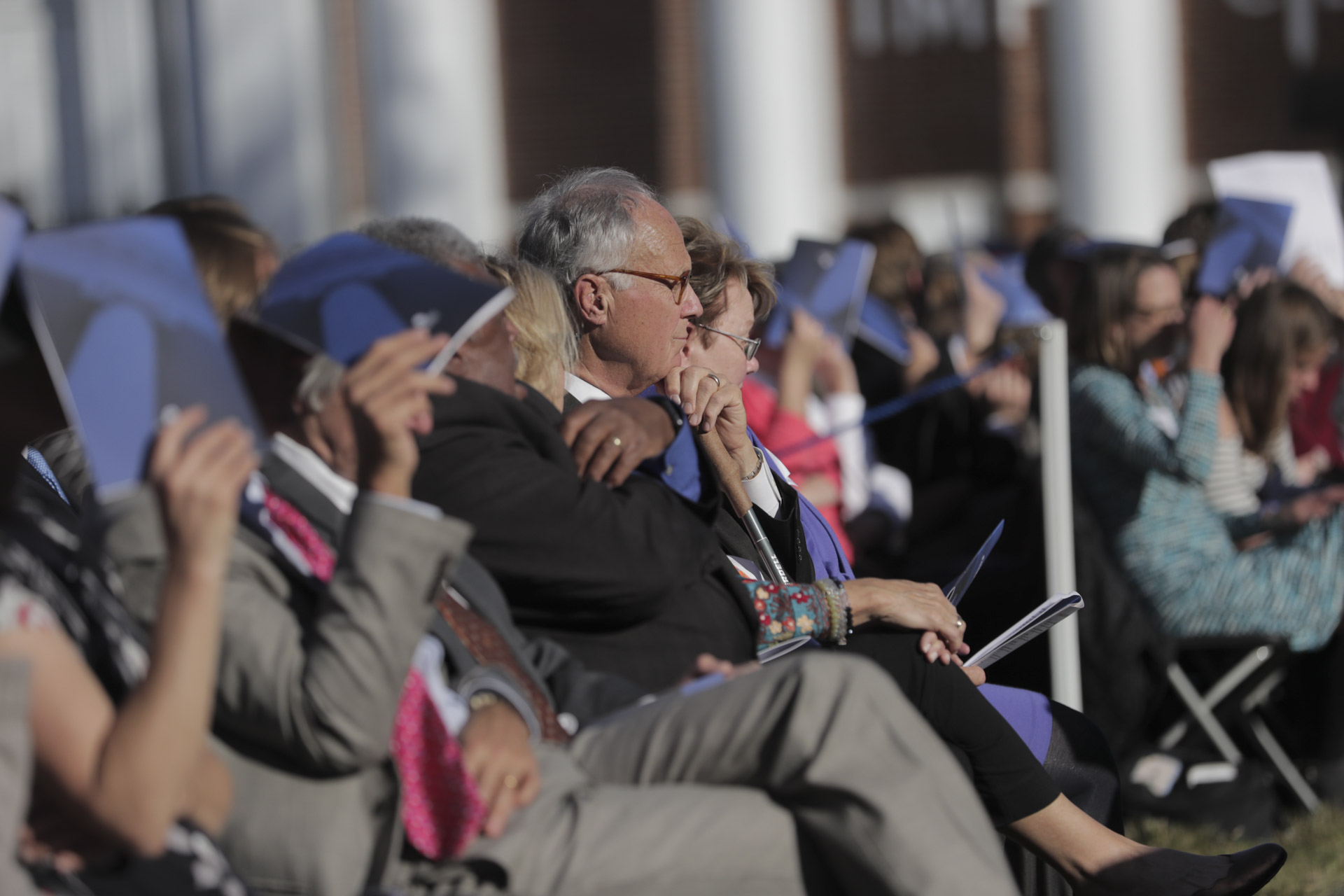 Ryan, a first-generation college student who attended Yale University and UVA’s School of Law on scholarship, also wants UVA to be known as one of the best universities in the world for first-generation and low- and middle-income students.

The promise drew cheers from those assembled on the Lawn. The University currently provides a broad range of financial support for families with demonstrated need, but Ryan’s remarks represent the first promise that the approach for Virginia families at those income thresholds is now a formal University commitment.

Ryan laid out several other highlights in his vision for UVA’s future, from growing “a faculty as diverse as it is outstanding,” to using interdisciplinary research to tackle the world’s most pressing challenging and preparing students for a life of purpose and service.

“If you ask me what I see when I look ahead, I see a university that is considered not only Virginia’s flagship university, but our nation’s,” he said. “One that represents what is best about our country’s higher education system. One that is both excellent and accessible, one that is driven by the wonder of basic discovery and a commitment to the public good. A university dedicated to strengthening our democracy and making the world a better place. A university, a community, prepared to be different from others, just as this university was when it first began.”

Ryan acknowledged the world will be watching as UVA works to achieve this vision.

“I see, finally a community that has been thrust into the national spotlight and refuses to shrink from it. A community that understands the extraordinary opportunity we have to light a path forward – not just for ourselves, but for a fractured nation and a divided world,” he said. “Because this is no longer just about us. It’s bigger than that. We have a chance to show the world what progress looks like.”

Achieving that progress, he said, will require hard work and faith on the part of those on Grounds and well beyond. 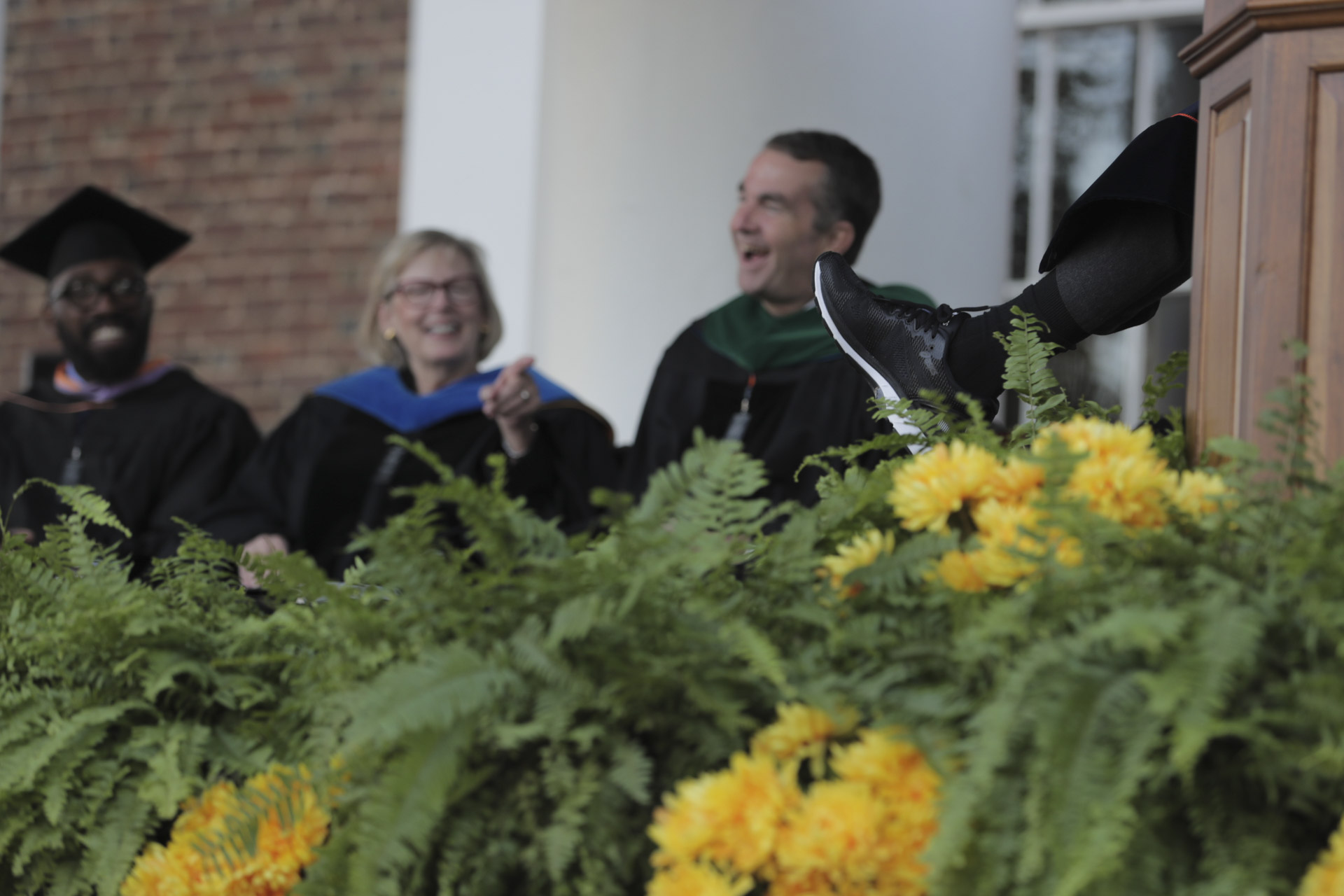 Ryan concluded his speech by joking with the crowd about his running shoes, which he wore underneath his academic robes. (Photo by Sanjay Suchak, University Communications)

“We will forever remain an unfinished project, just as this nation, whose founding is bound with our own, will also remain unfinished,” he said. “That fact should not dampen your faith, but instead strengthen your resolve. We may never be finished, but we can certainly make progress.”

“Friends, my running shoes are laced up,” Ryan concluded, drawing laughs as he showed off well-worn sneakers beneath his academic robes. “I’m ready, with your help, to begin anew on this unfinished but glorious project that is the University of Virginia.”