Karsh Institute Project Highlights the Power of Conversation Over Division 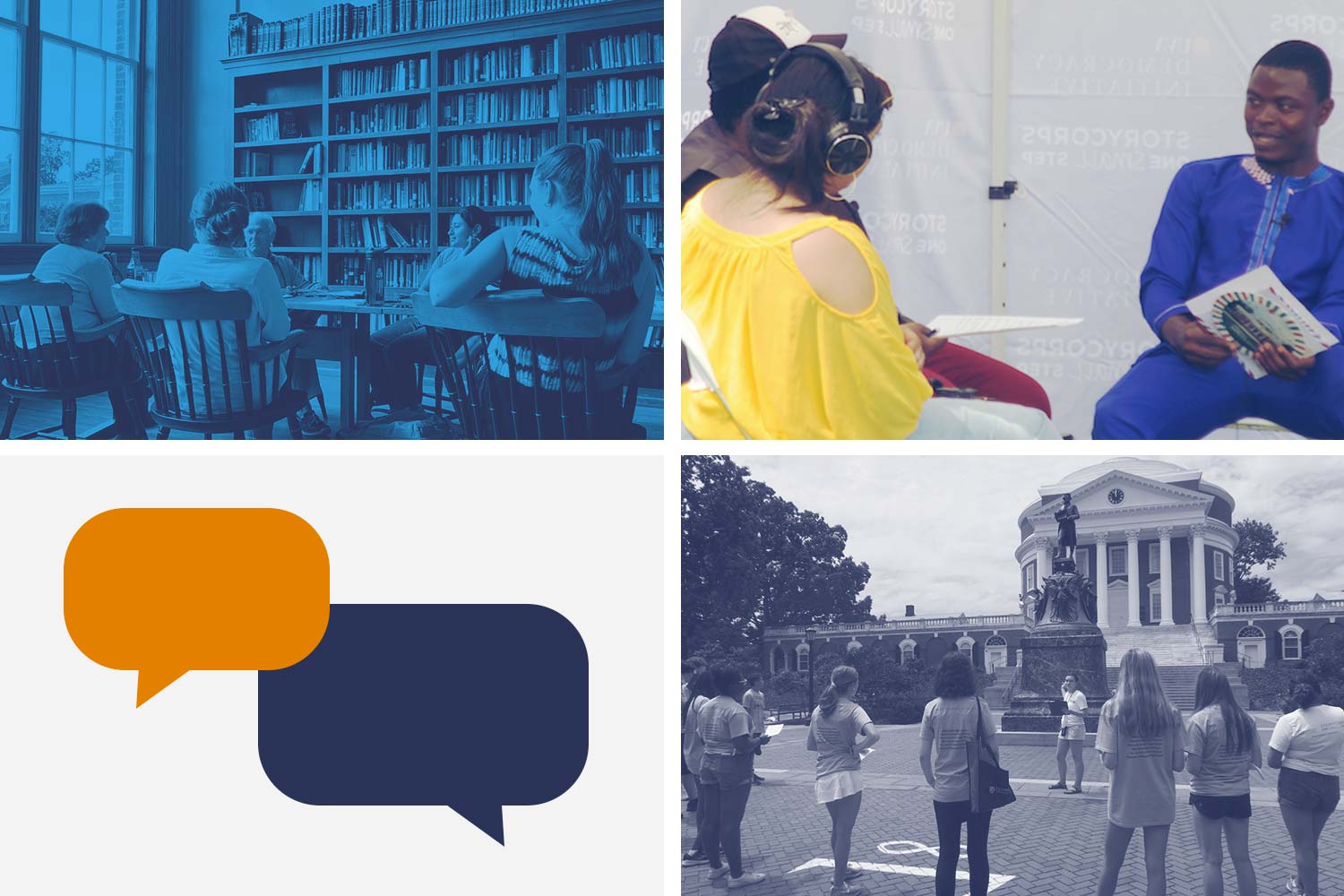 In one conversation, two men, one older and one younger, talk about how people of different races are perceived.

In another, two young women talk about their experiences of religion, faith and politics at the University of Virginia. Other conversations cross ideological divides or find unexpected common ground in careers and hobbies.

These conversations are part of the “One Small Step” project, a partnership between the UVA’s Karsh Institute of Democracy and StoryCorps’ national One Small Step initiative. Started in October 2021, the UVA One Small Step project has since recorded more than 80 conversations, both virtually and in-person, with participants from around the Charlottesville area.

When potential participants sign up, Mahadevan and her team work to pair them based on both differences and commonalities.

“It is not a process we take lightly,” Mahadevan said. “It is time-consuming, but we really try to understand who people are.”

Then, participants meet for an hourlong conversation, with a moderator present to facilitate.

In one conversation, a gulf of several decades separated two participants: Bob Pearson, an Air Force veteran, and Carlos Rodriguez, a third-year UVA student at the time of the recording. However, they connected over similar feelings of isolation and culture shock, either when joining the Air Force or going to college.

The pair also discussed racism. Pearson talked about growing up in a nearly all-white farming community in Connecticut. As he experienced more of the world in the Air Force, Pearson said, he realized that some of the things his family and community members said about people of other races truly bothered him.

Rodriguez, on the other hand, grew up in the Bronx and encountered many people of different races and ethnic backgrounds, but very few white people until he came to Virginia. He said he often felt out of place in predominately white areas and wondered if he was safe or if people wanted him there.

“I think when I see older white Americans … I’m always thinking they are looking at me like ‘What is he doing in my neighborhood?’ or ‘Why is he here?’ and honestly, I have had experiences where that has been the case,” Rodriguez said. “But you know, when we had this conversation, we do have a lot in common and we would not have known that about each other if we did not talk.”

Another pair, student Cristina Amador and history doctoral student Olivia Paschal, talked about experiences growing up in the evangelical church and faith communities at UVA. They also discussed how their faiths affect their political views and how those views have evolved over time.

“Maybe this is an unpopular point of view, but I don’t think that I am fully formed yet in terms of my political view and a small part of me hopes that I never will be,” Amador said. “Because, again, that means you are sort of stuck to this point and I think oftentimes people see that as unchanging, and I never want to have that mentality.”

They also discussed common misconceptions about their upbringings. Amador is Puerto Rican and said she often resented the idea that her family was at a disadvantage just because they were minorities. Her parents worked really hard, she said, to provide for their family and give their children opportunities. Paschal is from Arkansas, and said people she met at UVA sometimes assumed that she was from a small, backwater area or that she had not encountered a lot of culture.

“There is a nugget of truth in some of that, but on the other hand, the corporate center of Walmart is about five miles from where I grew up,” she said. “That is the center of globalization and American commerce.”

Conversations do not always completely bridge political divides, of course. They are not meant to gloss over differences, but to give opportunities for learning and connection. Many people continue to disagree, but learn more about where the other person is coming from.

When Sandra Lewis and Andy DeStephano met, they talked about Lewis’ experiences growing up in a segregated Virginia and the civil rights movement, and DeStephano’s experience with 9/11 as a New Yorker. They didn’t agree on what role the federal government should play in people’s lives nor on the political parties they supported. However, they gained understanding and empathy for each other’s experiences and reasoning.

Asked to conclude with some words of wisdom for those listening, both focused on the ties of family, friendship and community that have strengthened their lives.

“When you stop valuing those types of relationships with other people, your family and your friends, it impacts how you look at others,” DeStephano said, citing the importance of meaningful conversations in the midst of busy days. “This is what has really formed my life. I remember as a child sitting at the dinner table and having political disagreements with my parents.”

“We have continued to have people sign up, including a lot of students recently, which is very exciting,” she said.

The Karsh Institute will host a live One Small Step conversation with Democratic state Del. Sally Hudson and Republican former U.S. Rep Denver Riggleman on Dec. 1. The event is free and open to the public.

When Less Is More: How Harnessing the Power of Subtraction Can Add to Life END_OF_DOCUMENT_TOKEN_TO_BE_REPLACED