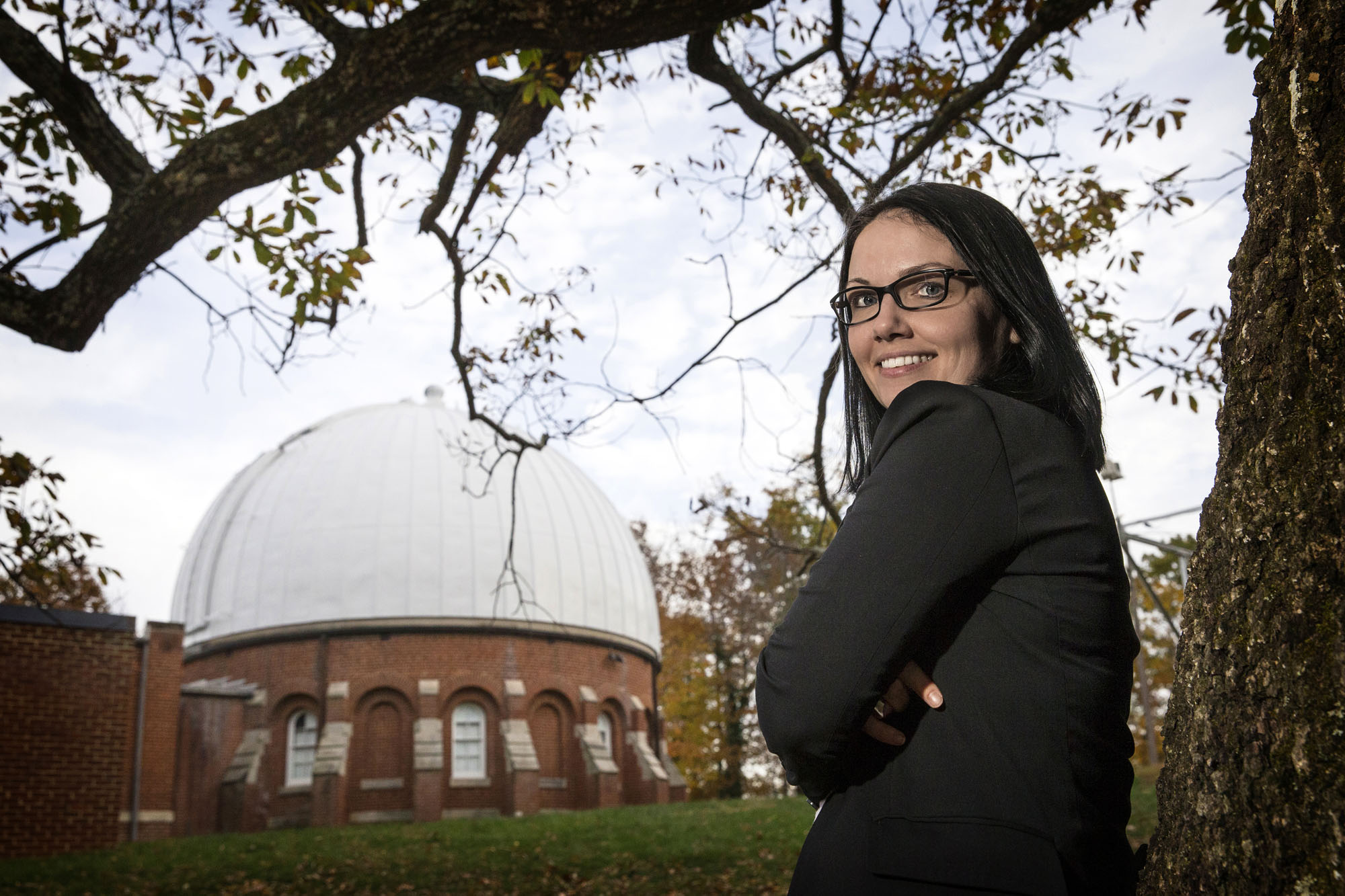 Sabrina Stierwalt, a University of Virginia post-doctoral astrophysicist, plans to use her $60,000 award to further her research into how small galaxies form.

Sabrina Stierwalt, a University of Virginia post-doctoral astrophysicist, has been named a 2014 L’Oréal USA For Women in Science Fellow – one of five female scientists selected from a national pool of more than 650 applicants who have made outstanding contributions in science, technology, engineering and mathematics.

She is the only astronomer to be selected as a fellow during the program’s 11-year history in the United States.

Recipients each receive $60,000 to support their postdoctoral research and related public outreach activities. Next week, Stierwalt and her cohorts will join L’Oréal representatives for a White House roundtable, congressional visit and an event and ceremony at the Smithsonian Museum of Natural History in Washington. They also will tour L’Oréal’s research and innovation labs in Clark, New Jersey. L’Oréal is a beauty products company.

The U.S. fellowship program included a new requirement this year focused on ensuring the fellows have a commitment to serving as role models for younger generations. The 2014 fellowship candidates were evaluated based on their intellectual merit, research potential, scientific excellence and their commitment to supporting women and girls in science. Experienced scientists in the candidates’ respective fields reviewed applications with the American Association for the Advancement of Science, which manages the application process.

Stierwalt plans to use the funding to further her research into how small galaxies form.

“Large galaxies are well-studied, but we know much less about dwarf galaxies, how they interact with each other and with larger galaxies and how their stars form,” Stierwalt said. “It’s an area of astronomy that needs further investigation to more fully understand this part of the formation of the larger universe.”

During the coming year she will visit the Las Campanas Observatory in Chile to observe with the Magellan Telescopes. Part of her work is to gain observatory time on premier telescopes worldwide for herself and U.Va. astronomers.

Stierwalt came to U.Va. in the fall of 2012 from a postdoctoral fellowship at the California Institute of Technology. She previously earned her Ph.D. at Cornell University, where she co-founded an organization for graduate women in the physical sciences.

In addition to her research, Stierwalt also is engaged in public outreach, working as a coordinator and teacher for the U.Va. Department of Astronomy’s Dark Skies, Bright Kids program, which brings hands-on astronomy to rural elementary schools.

“Kids already know astronomy is cool, and they have so many questions,” Stierwalt said. “My goal is to encourage that interest and inspire them to do more with it.”

“With a scientific workforce made up of more than 70 percent women, L’Oréal relies on the contributions women make in the STEM fields every single day,” said Kristina Schake, chief communications officer at L’Oréal USA. “We are proud to celebrate the incredible accomplishments of these women and hope to inspire younger generations of girls to embrace STEM as a viable and attractive career option.”

Here Is What You Need to Know About the New Coronavirus Variant, Omicron END_OF_DOCUMENT_TOKEN_TO_BE_REPLACED

Fall Is in the Air on Grounds END_OF_DOCUMENT_TOKEN_TO_BE_REPLACED

Meet the Cats and Dogs Your CVC Donation Supports END_OF_DOCUMENT_TOKEN_TO_BE_REPLACED