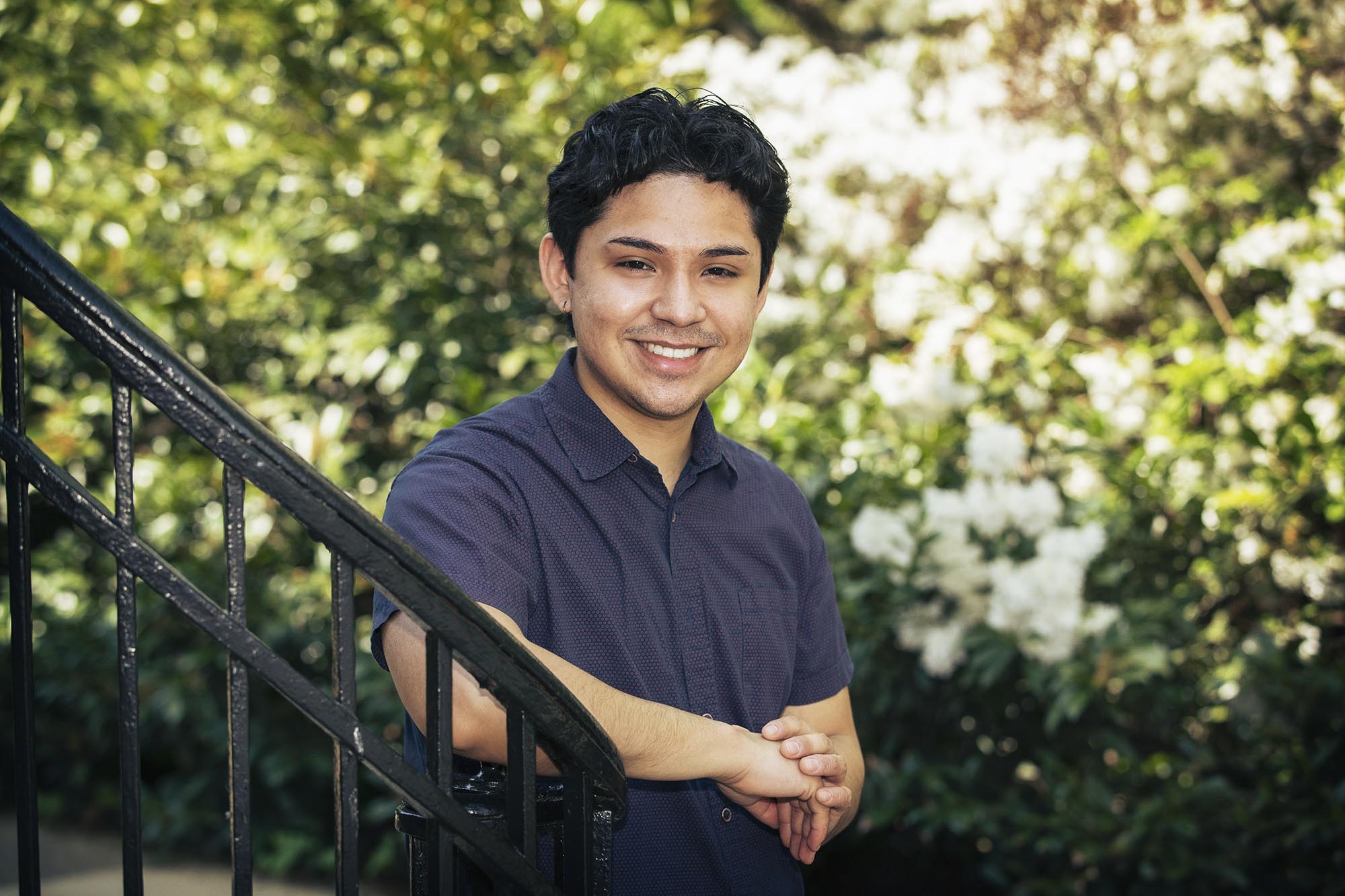 Aldo Barriente will continue his studies in the Mayan language as the University of Virginia’s seventh Beinecke Scholar.

The Lithia Springs, Georgia, native, a third-year linguistics and computer science major at the University of Virginia, is part of the Multepal Project at UVA, which works to encode and digitize texts related to Mesoamerica, such as the Popol Wuj, sometimes referred to as the Maya K’iche’ Book of Creation.

“Currently, we are working with Maya scholars in Mexico   and in Guatemala  to create new editions of the Popol Wuj in the Mayan languages of Yukatek and K’iche’that would be more accessible and community-oriented, such that the text can come back to these communities through efforts led by community members.”

Barriente’s work in this collaborative effort is to encode an edition of the text published in 1999, written in the modern K’iche’ orthography system by K’iche’ linguist Sam Colop.

“After the Mexico and Guatemala teams finish their editions, our intent is to encode these editions as well and then provide an open-access digital text for these communities to read and listen to,” he said. “Learning K’iche’ was a great blend of my interest in languages and my skills.”

“I would often try to learn new languages with one of my older brothers when I was younger, and I carried that interest throughout my high school career,” he said. “As I was looking at courses to enroll in before my first year at UVA, I noticed that the Department of Spanish, Italian, & Portuguese was offering a course in Maya K’iche’. I knew very little about Mayan languages at the time, so I thought it’d be a great start to learn more.”

Barriente applied to Undergraduate Student Opportunities in Academic Research Program, which connected him to Allison Bigelow, an associate professor of Spanish in the Department of Spanish, Italian & Portuguese, who introduced Barriente to the Multepal Project.

Bigelow described Barriente as “an outstanding collaborator and researcher.”

“Since joining the Multepal Project in August of 2018, Aldo has written more than 20,000 words of content in English and Spanish for our database of Mesoamerican cultural topics, which receives approximately 148 and 146 views per month in Guatemala and the U.S., and 73 in Mexico,” Bigelow said. “More recently, he has taken on critical roles as our team’s lead Canonical Text Services  developer, becoming the bridge between researchers at UVA and Tufts University.”

Recently, Barriente gathered images of classic-era Mayan iconography to support a team of Yukatek Maya researchers at the Universidad de Oriente in Venezuela who are preparing an interactive digital edition of the Popol Wuj to promote youth language learning.

“The artists on the team will use Aldo’s research to transform symbols into images that resonate with contemporary Indigenous readers,” Bigelow said. “From writing code to analyzing K’iche’ etymologies to studying visual cultures, Aldo has a unique ability to weave together insights and methods from computational sciences, social sciences and the humanities in ways that will come to define emerging fields like Indigenous Digital Humanities and its public-serving scholarship.”

Bigelow sees Barriente as an asset to the project.

“He is intellectually curious, kind and funny,” she said. “I have genuinely enjoyed working with him and I can’t wait to see where his research takes him.”

Barriente wants his work to take him to graduate school after a gap year to work on software development in Richmond, and he is applying to the University of Texas at Austin’s and Vanderbilt University’s Ph.D. programs in Latin American studies; he hopes to combine a doctorate with a certificate in digital humanities or digital studies.

“I’m thrilled for Aldo and the Beinecke Scholar community,” said Andrus G. Ashoo, director of the Office of Citizen Scholar Development, UVA’s fellowships office. “We are always encouraging our USOAR students to think about the next stages in their development, whether that is continuing their research or seeking out clarifying experiences. Aldo is obviously someone who needs very little encouragement as he has an insatiable appetite for learning and a work ethic to match.”

Ashoo also mentioned that he hopes Barriente’s example will inspire more students in the arts and humanities to see themselves as competitive candidates for the Beinecke or other fellowships.

“We have not always had a lot of interest in the Beinecke, but I could not be more excited to have Aldo as a representative. In addition to being intellectually sharp, he is kind and humble in the way he goes about life. I hope others will be encouraged to come and see us.”

The board of directors of The Sperry and Hutchinson Company established the Beinecke Scholarship Program in 1971 to honor Edwin, Frederick and Walter Beinecke, who led The Sperry and Hutchinson Company in the 1920s. Each scholar receives $4,000 immediately prior to entering graduate school and an additional $30,000 while attending graduate school.

“Once accepted into a program, I intend to study the complex relationship between language documentation and indigenous data sovereignty – that is, when a linguist enters a community for documentation or revitalization efforts, how much does the linguist involve the community in how and where that documentation is stored?” he said. “After completing this program, I will work in a digital studies lab at a university or library institution that works to collaborate with communities and provide them with the digital tools and resources to create texts, document oral histories or preserve their language.”

An Echols Scholar, Barriente has been the Spanish translation editor at The Cavalier Daily, the independent student newspaper; a drill instructor with the Cavalier Marching Band; and a French horn player with the Cavalier Symphony Orchestra. He has co-written an article in Ethnohistory Journal with his research group, entitled “Popol Wujs: Culture, Complexity and the Encoding of Cosmovisión.” Barriente is also a recipient of a Harrison Undergraduate Research Award.

Barriente sees his work as collaborative.

“One of the most valuable things I’ve learned is the importance of the relationships we build while doing research,” he said. “I’ve really valued the team I’ve worked with for the past three years. In particular, I’ve worked with my research mentor, professor Allison Bigelow, since the beginning of my research here at UVA and she has been formative in my understanding of doing humanities and decolonial research, the planning of my career past graduation and my development as a person. This serves as a good reminder that research is just as much about developing strong and trustful connections and relationships as it is about producing knowledge.”

What Is the ‘4th Side’? END_OF_DOCUMENT_TOKEN_TO_BE_REPLACED