“It took us about 10 years to get up the courage to do it, but we finally did it,” University of Virginia astronomer Ed Murphy said.

“It” being the removal, disassembly, cleaning and reassembly of the 142-year-old lens on the historic Leander McCormick Observatory telescope at UVA. The last time that was done was in 1975.

The full lens weighs nearly 200 pounds with its components of two carefully-crafted glass lenses mounted closely together with a brass housing unit called a cell.

“Nobody wanted to be the one that breaks it,” Murphy said.

During the last few months, UVA astronomers and technicians very carefully removed the lens unit, transported it to a clean room at the astronomy department, separated the parts, and removed dust and smudges, mold, mildew and assorted unidentifiable debris from the four surfaces of the two 26-inch lenses – lenses that were first ground and hand-polished to perfection, then completed in 1876 by master lens makers Alvan Clark and Sons.

The completed telescope was installed in 1884 and dedicated on April 13, 1885, on Thomas Jefferson’s 142nd birthday. It was the realization of Jefferson’s dream to establish a world-class observatory at the university he founded.

At the time of the dedication, the McCormick telescope was the second-largest in the world, and the largest in the United States. For decades, UVA astronomers made major advances in the field of astrometry, which is the precise measurement of the locations and movements of stars. Much of modern astronomy is built on that foundational work.

The McCormick Observatory is a Virginia State Landmark and is listed on the National Register of Historic Places.

By the standards of today’s massive and highly technological telescopes, the McCormick eye-on-the-sky instrument is no longer useful for meaningful research, but it serves as a great teaching tool for astronomy students, and for inspiring public interest in astronomy during the monthly open house events Murphy organizes.

“This telescope didn’t come with an owner’s manual,” Murphy said. “We spent a year researching how to do this delicate and labor-intensive project. The lens is an exceptionally rare and beautiful functional work of art with historical significance. You don’t just use common household glass cleaner.”

You use deionized water, alcohol and a specialty product called Alconox, he said.

Murphy estimates that a brand-new lens of similar quality, custom-made, would cost more than $100,000 and would come complete with absolutely no historical significance. UVA got the entire telescope, including lens and building with retractable roof, at the bargain-basement price of only $128,000 – in 1885. The entire facility today would cost about $6 to $8 million.

The next step, with some fund-raising, Murphy said, is renovation of the historic metal dome that protects the telescope and other equipment in the observatory.

“The McCormick Observatory is an antique, but it serves a very important purpose for modern science,” he said. “It inspires future generations of scientists.”

The crew working on the lens cleaning project kept detailed notes of the process for future reference. UVA photographer Sanjay Suchak documented the entire project for the astronomy department. Some of his work is displayed here for UVA Today readers. 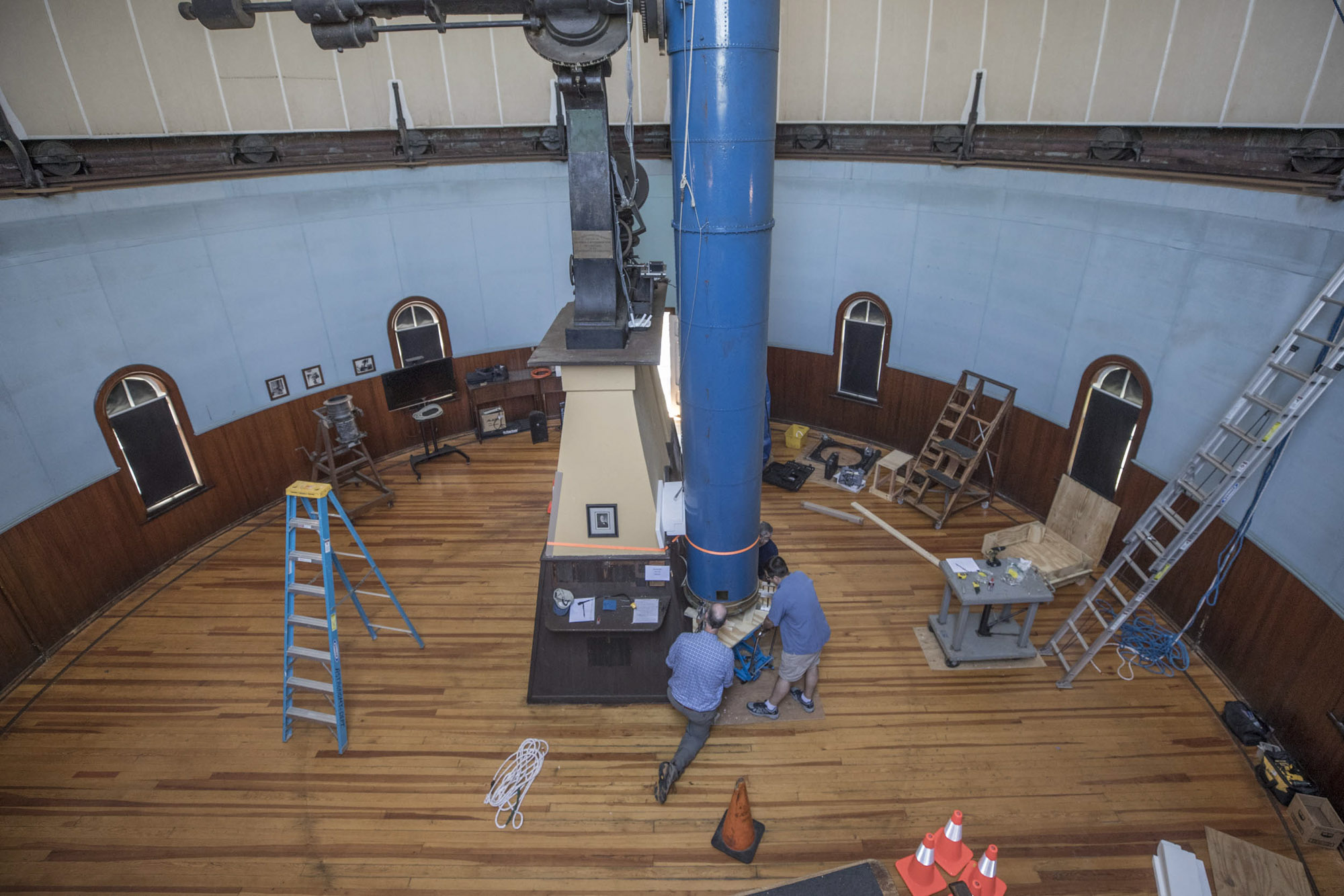 Team members work on removal of the lens from the telescope tube. 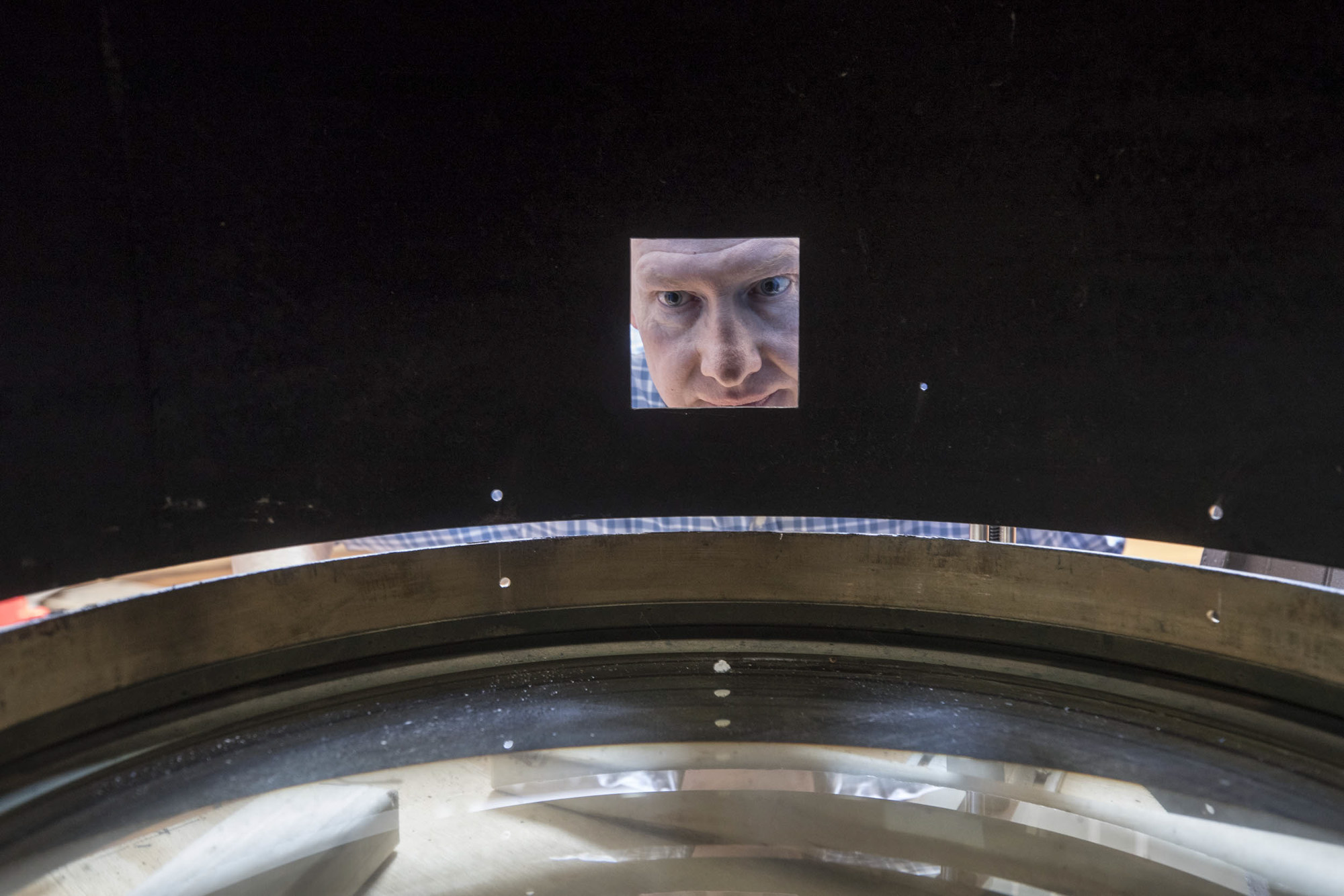 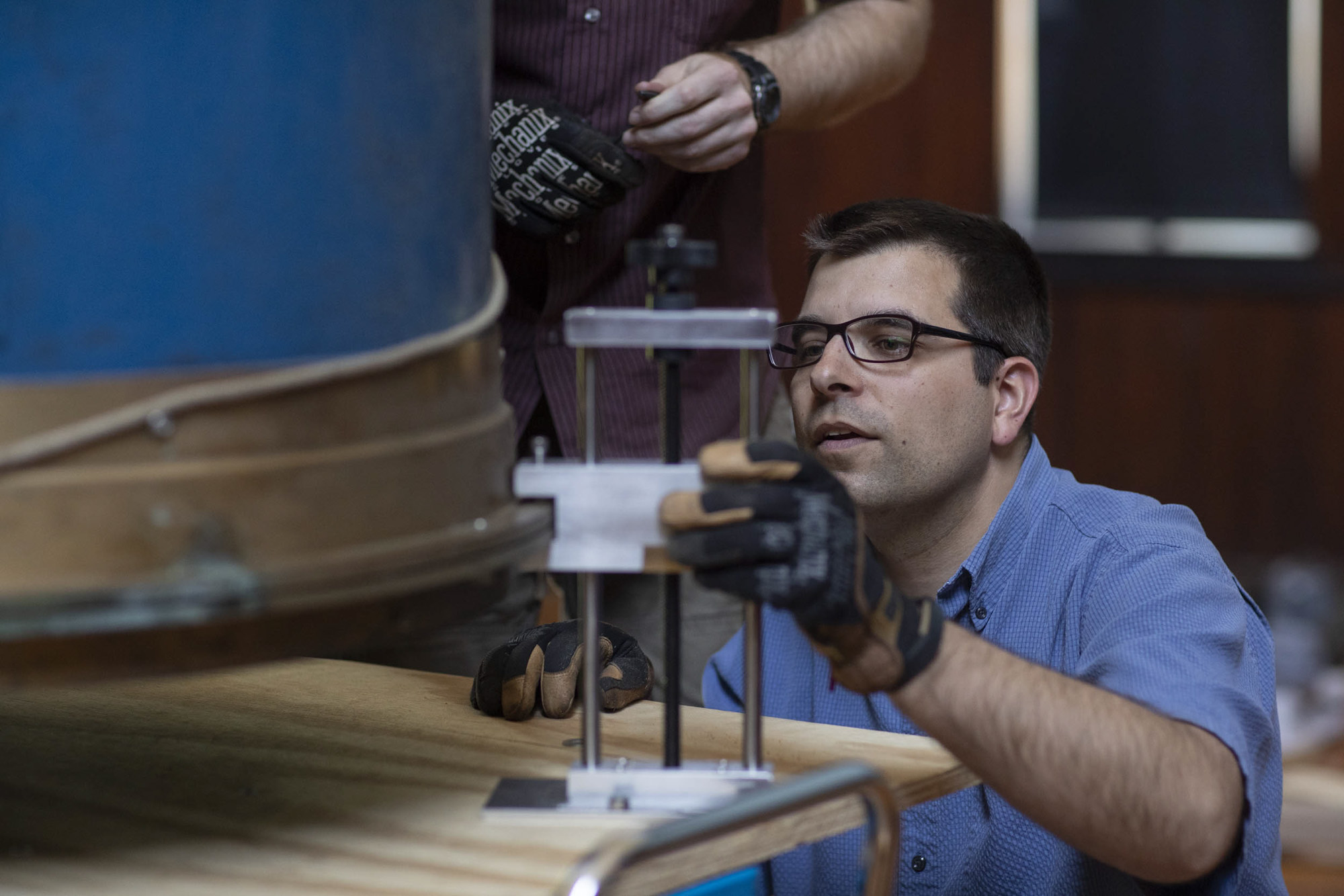 Instrument technologist James Davidson lines up the telescope element with a custom jig designed to lower it from its mounted position onto a cart. 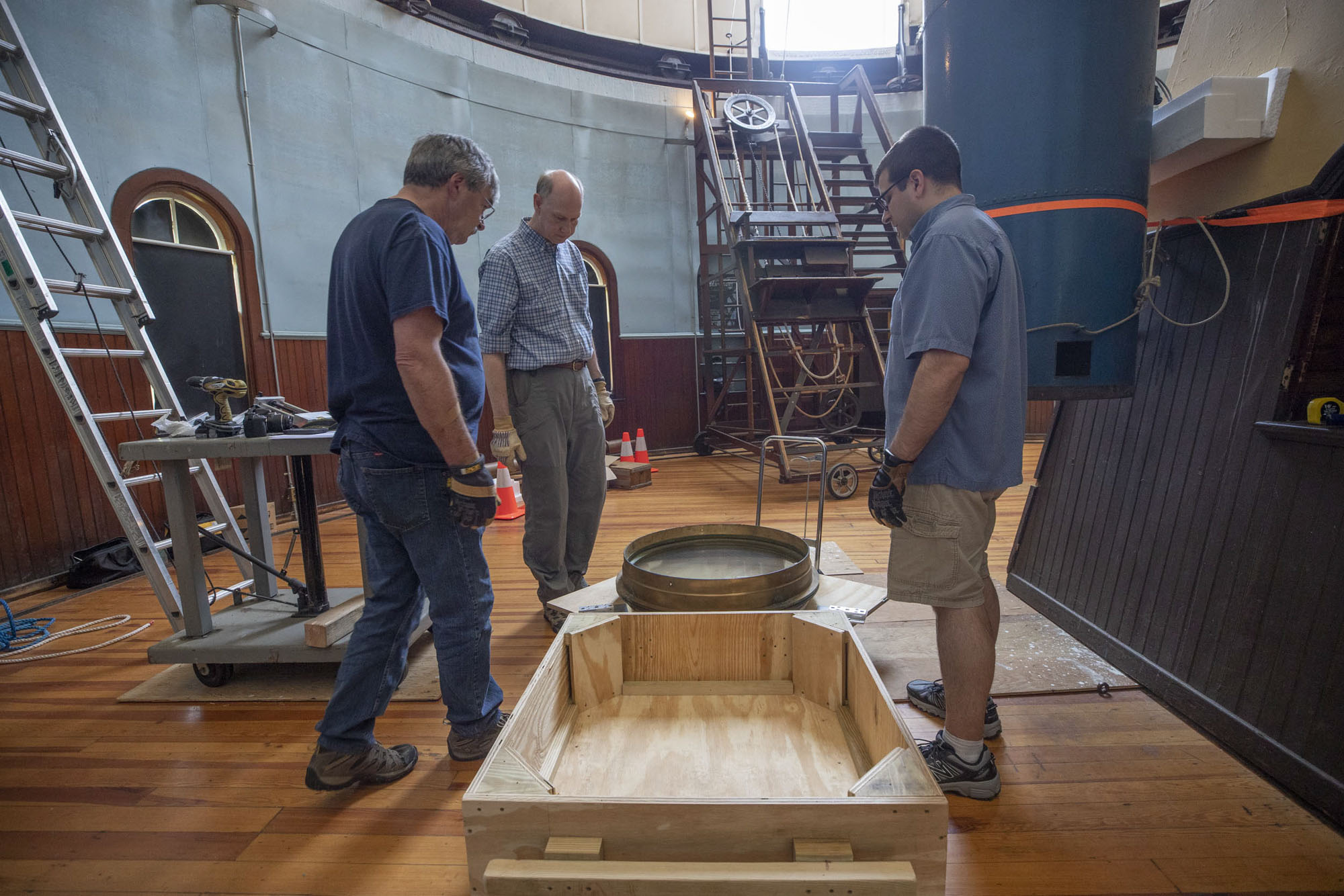 Astronomy department machinist Charles Lam, Murphy and Davidson evaluate how to prepare the lens for transportation to the department’s clean room. 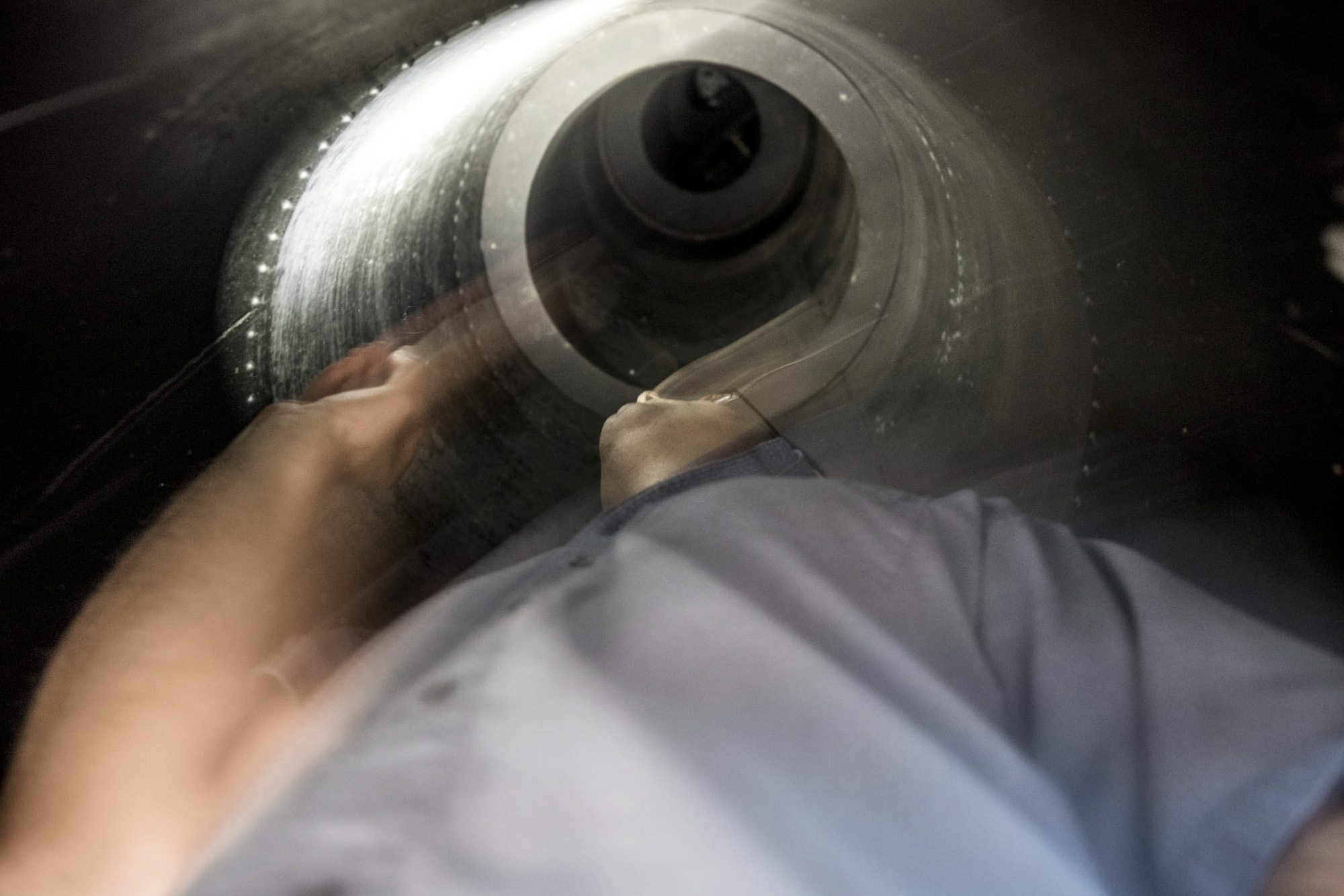 James Davidson, who planned and executed the entire project, examines the inside of the telescope after lens removal. 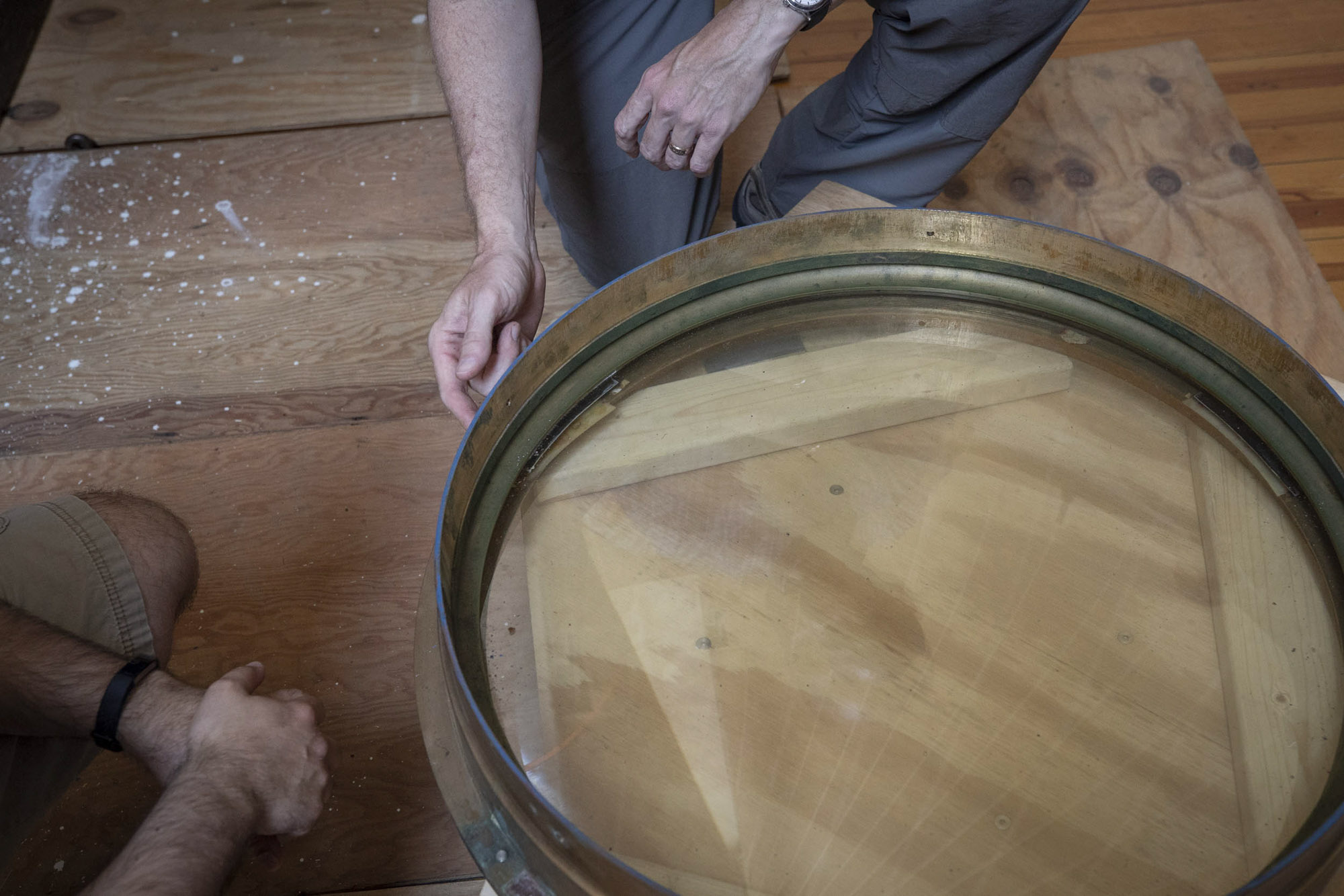 Examining the lens’s brass cell after removal from the telescope. 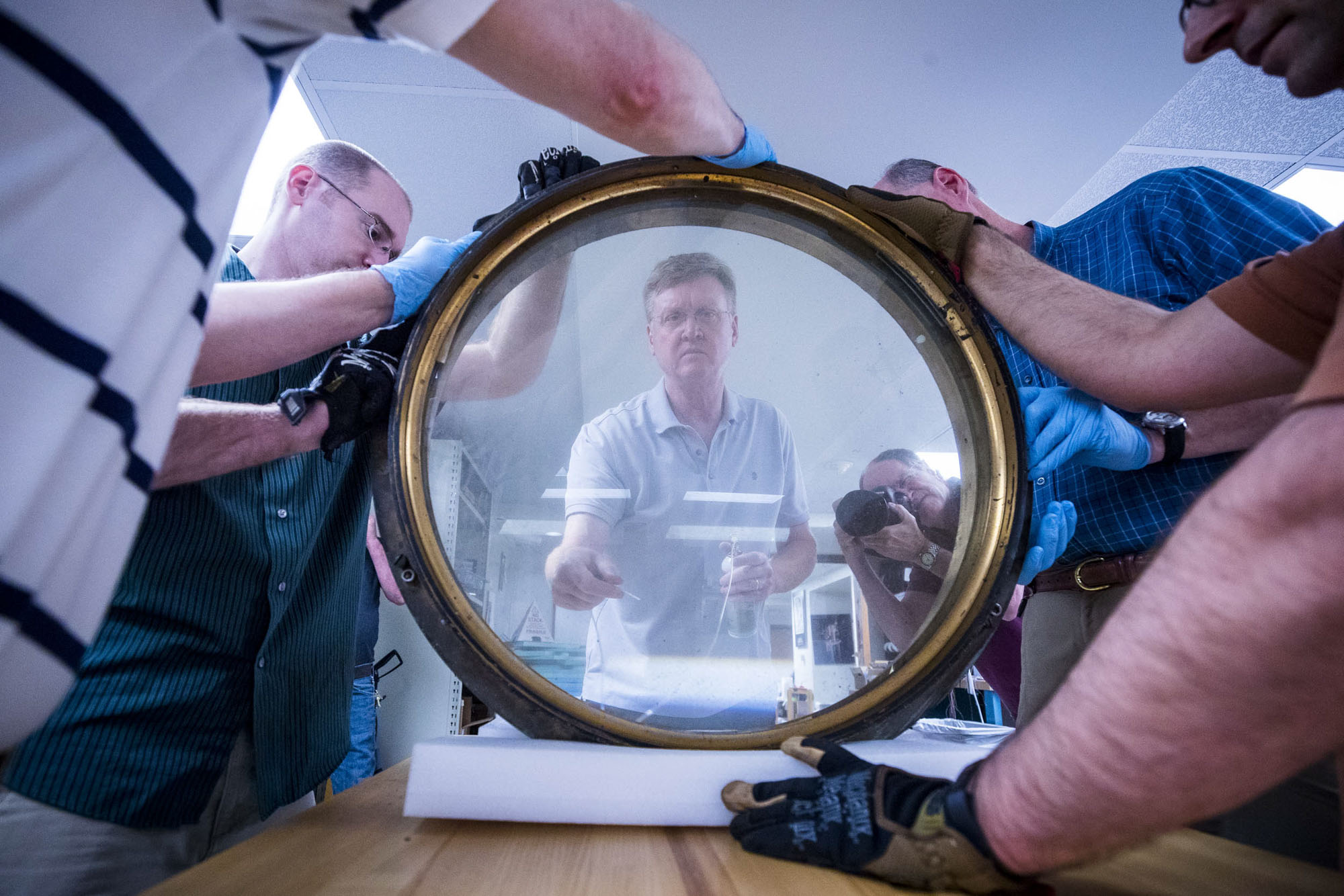 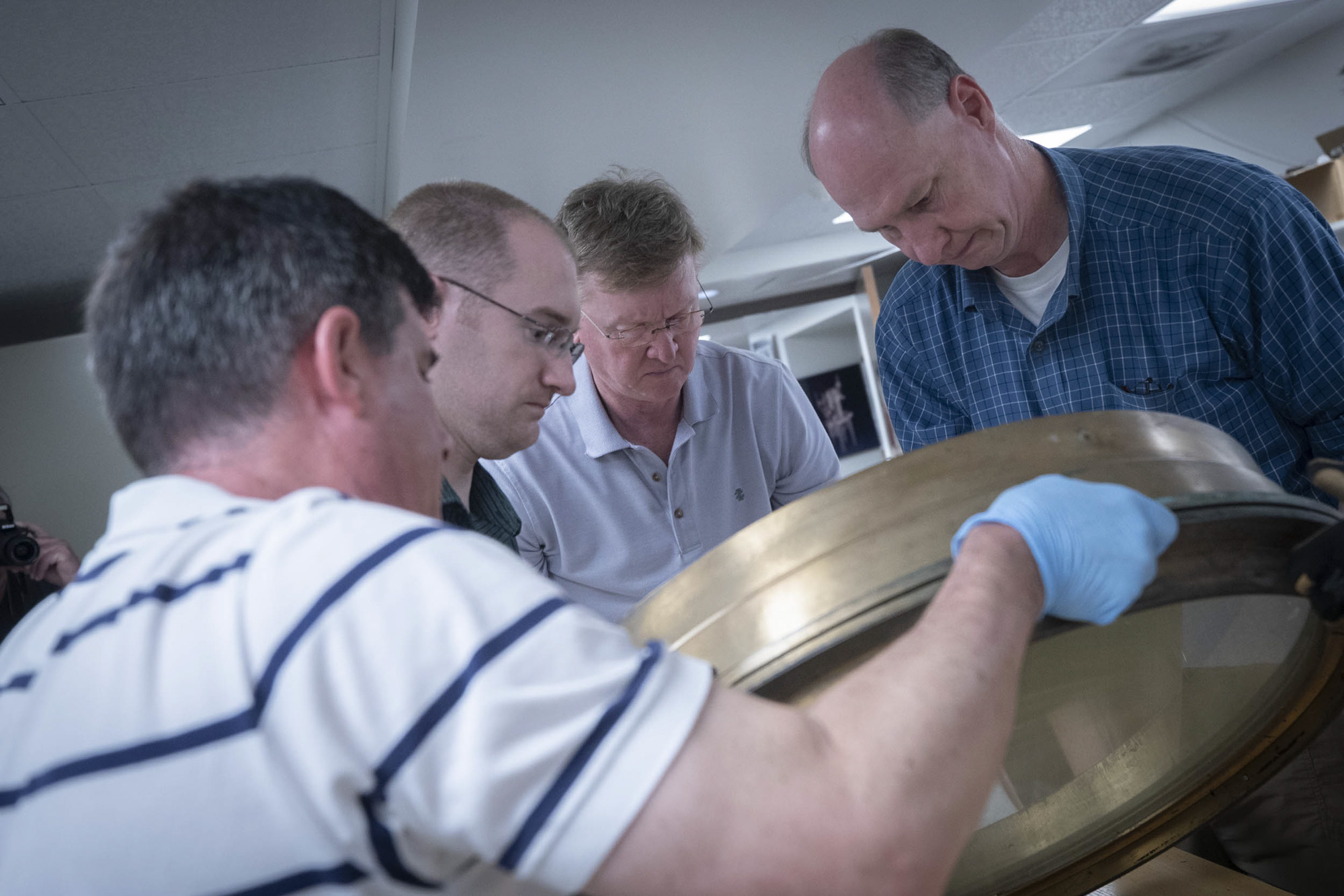 The team turns the element in order to clean the other side. 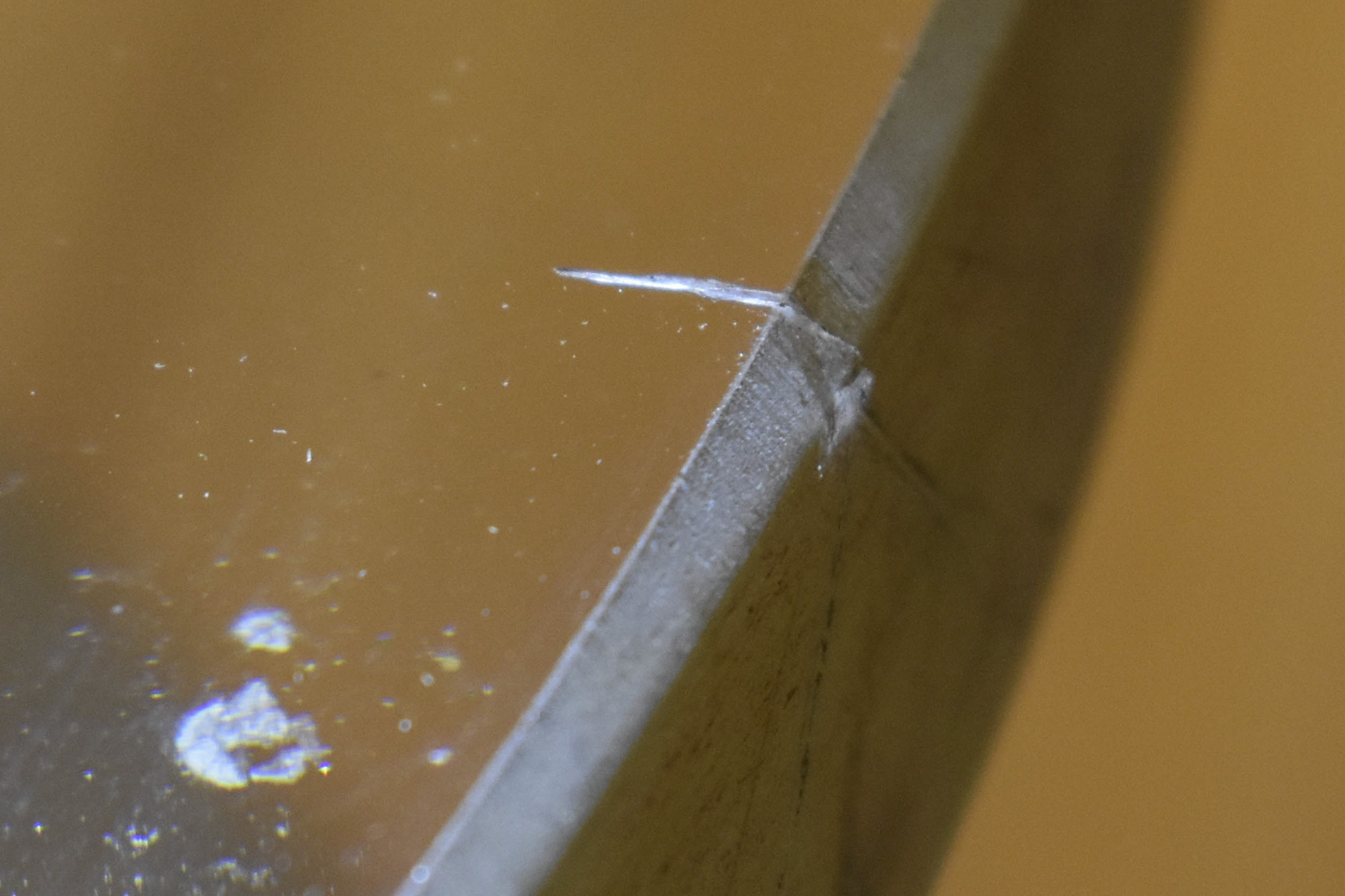 The team discovered a small fracture under the grime. It later was ground out by Chuck Peterson, a technician from Nu-Tek Optics. (Photo by James Davidson) 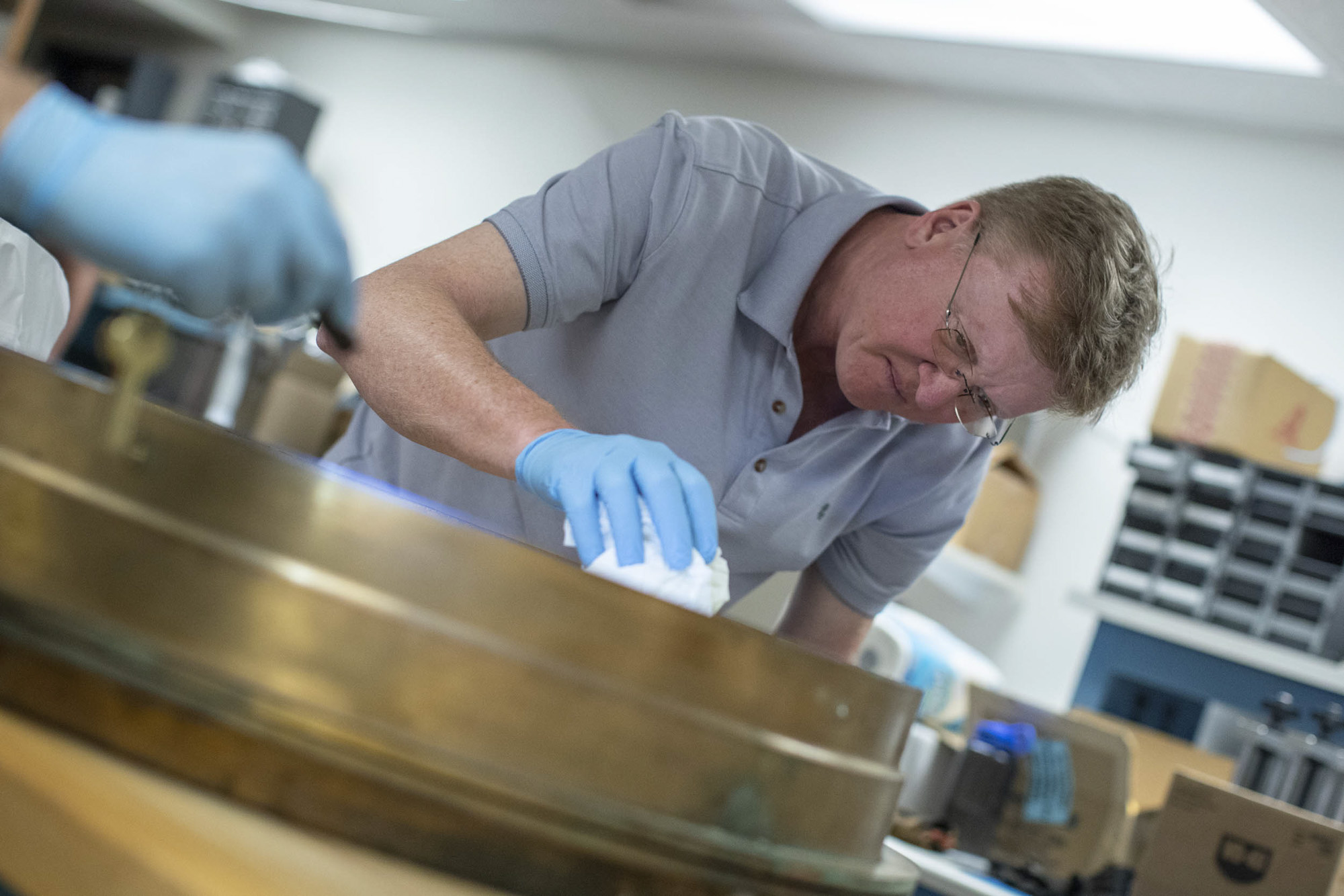 Research scientist Matt Nelson dabs the element with cleaner and a clean towel to pick up dust. 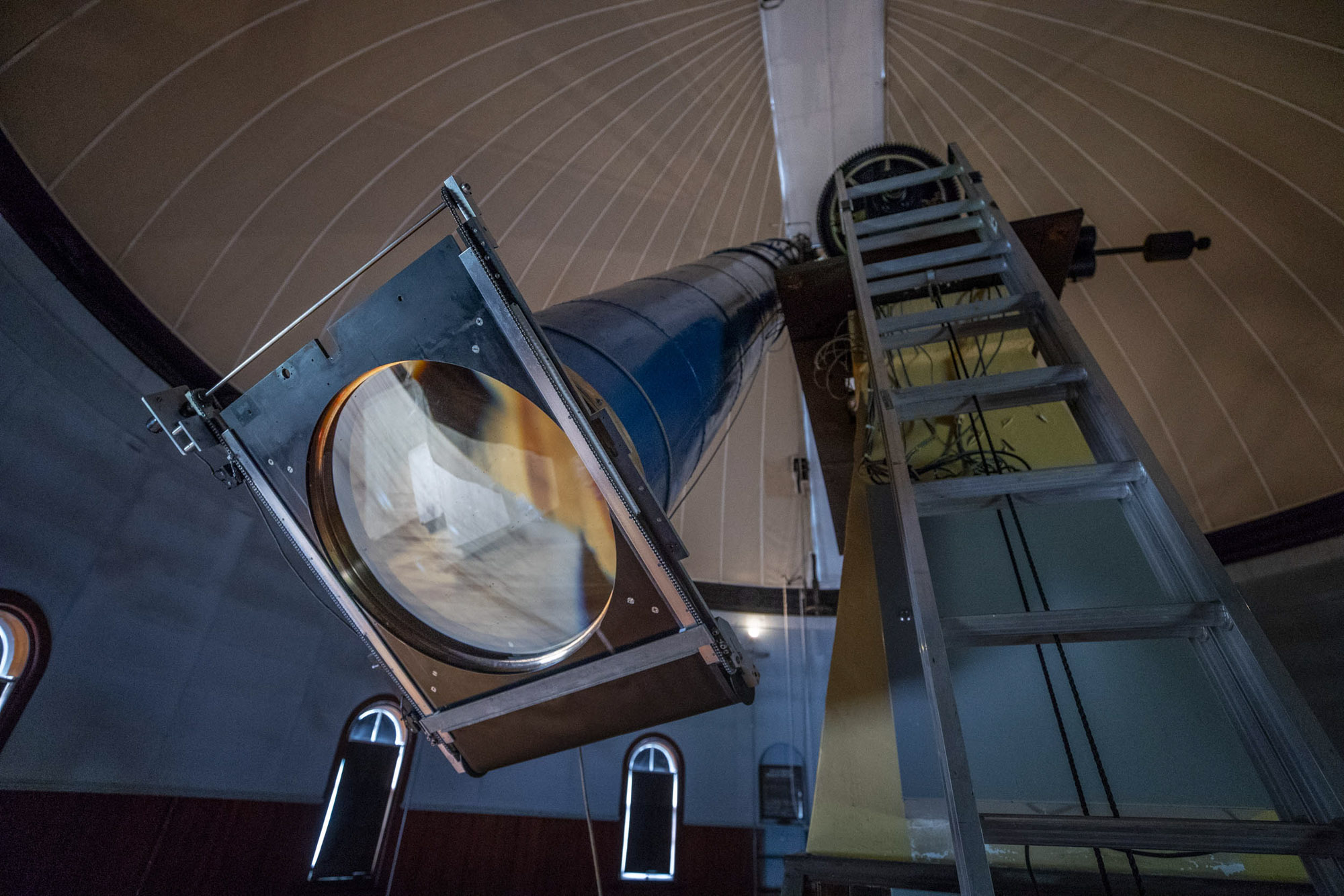 The cleaned element is back inside the telescope and ready for aiming back at the sky.

What Is the ‘4th Side’? END_OF_DOCUMENT_TOKEN_TO_BE_REPLACED