McIntire School of Commerce Dean Carl Zeithaml to Step Down 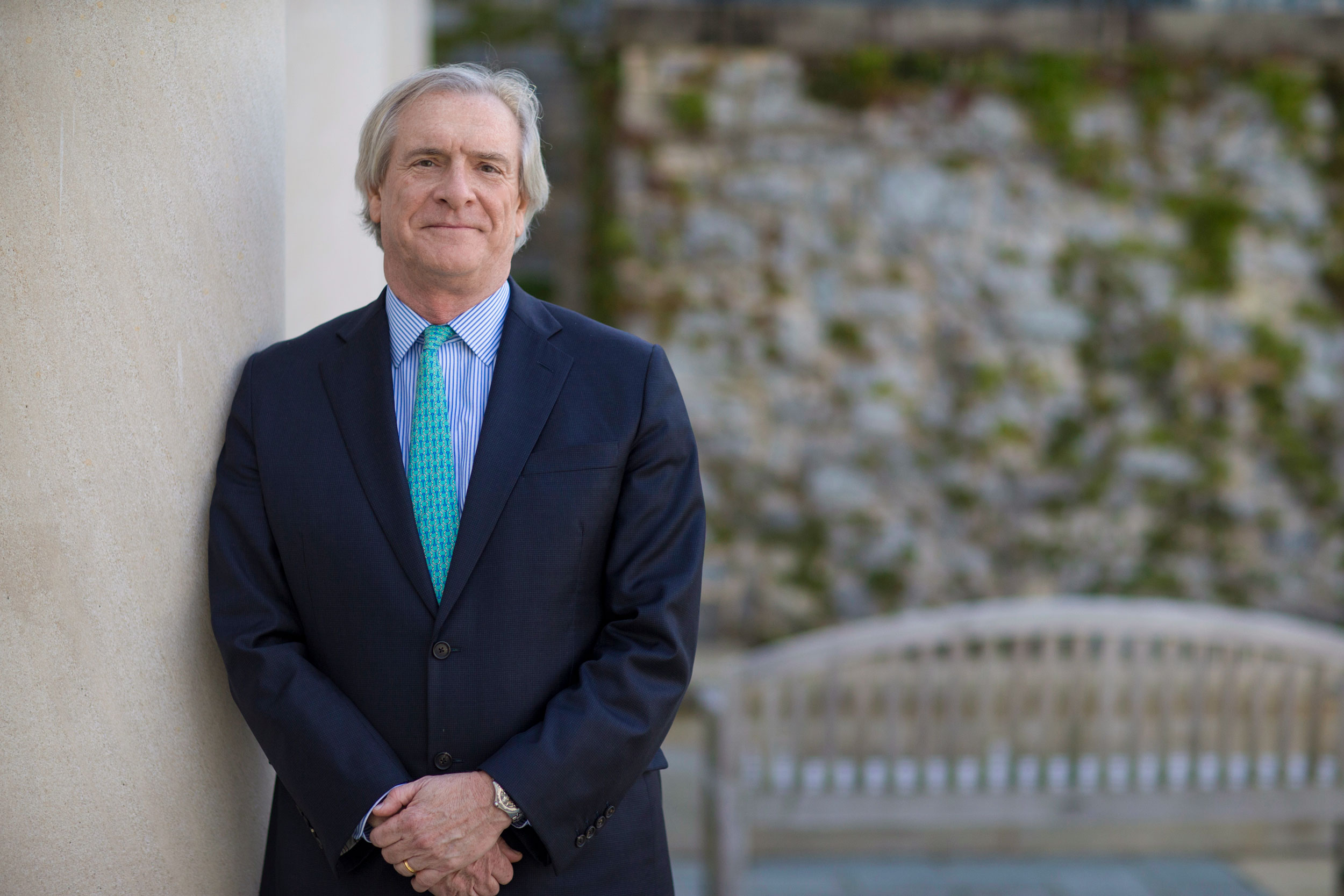 Carl P. Zeithaml will step down at the end of the 2019-2020 academic year. (Photo by Dan Addison, University Communications)

The University of Virginia announced today that F.S. Cornell Professor of Free Enterprise Carl P. Zeithaml will step down from his position as dean at the end of the 2019-2020 academic year after more than two decades of leadership and service at UVA’s McIntire School of Commerce.

Currently serving his fifth term, Zeithaml joined the McIntire School as dean in 1997. Over the past 22 years, he worked with faculty, staff, students and alumni to achieve the Commerce School’s position of global preeminence in business education. Zeithaml is a champion for McIntire’s unmatched student experience and sense of community; promotes a balanced culture of teaching, research and service among faculty and staff; supports an innovative and global curriculum across programs; and works to encourage strong bonds between the school and its alumni and friends.

“For more than two decades, Carl Zeithaml has been synonymous with McIntire – and largely responsible for its success,” UVA President Jim Ryan said. “Carl has also set the standard for what it means to be a dean at a public university, and I’ve depended on his wisdom and advice during my first year as president. As sad as I will be to see Carl step down, I am immensely grateful to him and look forward to one more year together.”

At the outset of his deanship, the McIntire School was home to a prestigious undergraduate business program, the McIntire Business Institute, and two graduate degrees: the M.S. in Accounting and M.S. in MIS (now M.S. in the Management of IT). Zeithaml quickly made his mark, transforming the B.S. in Commerce Program as a co-creator of the intense and demanding third-year curriculum known as “ICE” – the Integrated Core Experience. The innovative, immersive and team-taught approach is unique in undergraduate business education. ICE prepares students to enter the marketplace with rigorous analytic, strategic and behavioral skills and welcomes corporate sponsors into the classroom to offer students the opportunity to solve complex, real-world business problems. Zeithaml was a member of the first ICE faculty team, and, next fall, he will teach in ICE for the 21st consecutive year. In recent years, the B.S. in Commerce Program expanded beyond its five traditional functional business concentrations to include interdisciplinary tracks in advertising and digital media, business analytics, entrepreneurship, global commerce, real estate and quantitative finance.

Under Zeithaml’s leadership, the undergraduate program earned a stellar reputation. In the nine consecutive years (2006-2014) that Bloomberg Businessweek ranked American undergraduate business programs, McIntire’s B.S. in Commerce was the only one to be ranked either first or second each year. In 2018, McIntire earned the No. 2 ranking among undergraduate business programs in the U.S. by business education website Poets&Quants. Shortly after, Poets&Quants named McIntire “B-School of the Year,” citing its prowess in alumni satisfaction, career outcomes, student experience, tuition ROI and global curriculum.

As he sought to complement the school’s existing portfolio, Zeithaml’s strategic vision led him to forge unprecedented partnerships across Grounds and around the world. On Grounds, he worked closely with other schools to introduce two cross-curricular, pan-University minors in entrepreneurship and leadership. Sensing a gap in the U.S. market for a one-year business master’s degree, he oversaw the creation of the M.S. in Commerce Program, launched in 2008. The curriculum is based on both the integrative and track orientation of the B.S. in Commerce Program, and concludes with a three-week Global Immersion Experience required of all students. This program has been widely recognized since its inception, including a No. 2 ranking for master’s in management programs worldwide by the Economist in 2017.

“McIntire’s rankings are off-the-charts, but there is much that is essential that they will never capture about the school and its remarkable leader, Carl Zeithaml,” said UVA Executive Vice President and Provost Elizabeth Magill. “Carl’s vision and indefatigable efforts have, for more than two decades, shaped every aspect of McIntire’s experience for the better. In the coming years, faculty, students and staff will have the great gift of building on this singular institution thanks to Carl’s leadership. I am so pleased he will remain part of the UVA family for years to come.”

In 2016, Zeithaml orchestrated a complex partnership with ESADE in Barcelona, Spain, and Lingnan (University) College at Sun Yat-sen University in Guangzhou, China, to introduce the ambitious M.S. in Global Commerce Program. The unique pre-experience program offers business majors interested in broadening their global perspective the opportunity to earn two master’s degrees – a degree in Global Commerce from McIntire and an M.S. in Global Strategic Management from ESADE – as well as a certificate in International Business from Lingnan. Later, in 2018, Zeithaml was instrumental in the establishment of the M.S. in Business Analytics, a hybrid online/in-person program in Northern Virginia that is the first degree offered in partnership by the McIntire School and the Darden School of Business. In recent years, McIntire introduced two new certificates – Cybersecurity for Business Leaders and Sustainable Business – and the school is currently exploring new programs in partnership with the UVA School of Medicine and the School of Engineering and Applied Science. The school is also working with several other UVA schools to develop pan-University programs in real estate.

“For Carl, McIntire’s program growth and change were never about what was easy to implement; rather, it was a commitment to the highest-caliber graduates and the demands of the business marketplace,” said Professor Ryan Nelson, who joined McIntire in 1990 and served as associate dean for the undergraduate program from 2014 to 2019. “Carl’s vision led us in bold, new strategic directions while his passion inspired us to achieve outcomes we never knew were possible – the epitome of a transformational leader being in the right place, at the right time.”

A hallmark of Zeithaml’s tenure is a focus on the belief that all business is global business. To ensure students have access to international learning opportunities, he garnered the support of faculty and leveraged corporate and alumni connections around the world to construct a far-reaching global footprint for the school, often hitting the road himself to grow the network. In recent years, consistent with McIntire’s strategic objectives to create curricula that mirror the marketplace and attract a diverse and international student body, the school procured STEM designations for all but one of McIntire’s degree programs. Zeithaml’s focus on access also led to the founding of the Commerce School’s Office of Diversity, Equity and Inclusion, responsible for recruiting, supporting and educating a community that embodies the diversity of the global workforce.

Zeithaml also successfully built alumni and corporate relationships, with notable results. He led McIntire through two previous capital campaigns, surpassing school goals of $48 million and $150 million. He continues to be a tireless fundraiser, as McIntire has already raised more than $90 million toward its $250 million goal in its current campaign. He emphasizes consistent outreach by growing McIntire’s six research centers, expanding the corporate partners program, and hosting forums and symposia that are open to the public. Over the years, the school has welcomed prominent business leaders and alumni, including Nobel Prize winner Daniel Kahneman, legendary investor Julian Robertson, and best-selling author of “Hidden Figures” Margot Lee Shetterly, who earned a McIntire degree in 1991.

In addition, Zeithaml led many changes to the Commerce School facilities. In 2008, the “Back to the Lawn” campaign returned McIntire to its original home in Thomas Jefferson’s Academical Village, including a refurbished Rouss Hall and the construction of Robertson Hall. To ensure McIntire’s ongoing capacity for accommodating growth in students, faculty and programs, he is supervising the initial development of Shumway Hall, a new building slated for construction adjacent to Rouss & Robertson Halls.

For 10 years, Zeithaml and his family resided in Pavilion X on the Lawn, and, for the past three years, they called Pavilion III home. The Zeithamls hosted many student and alumni gatherings throughout this time, and four of their five children hold UVA degrees. At the conclusion of his contract, Zeithaml will continue to serve the school as a strategic management professor. In the coming months, the provost will form a committee to conduct a nationwide search for a new dean.

Here Is What You Need to Know About the New Coronavirus Variant, Omicron END_OF_DOCUMENT_TOKEN_TO_BE_REPLACED

Fall Is in the Air on Grounds END_OF_DOCUMENT_TOKEN_TO_BE_REPLACED

Meet the Cats and Dogs Your CVC Donation Supports END_OF_DOCUMENT_TOKEN_TO_BE_REPLACED