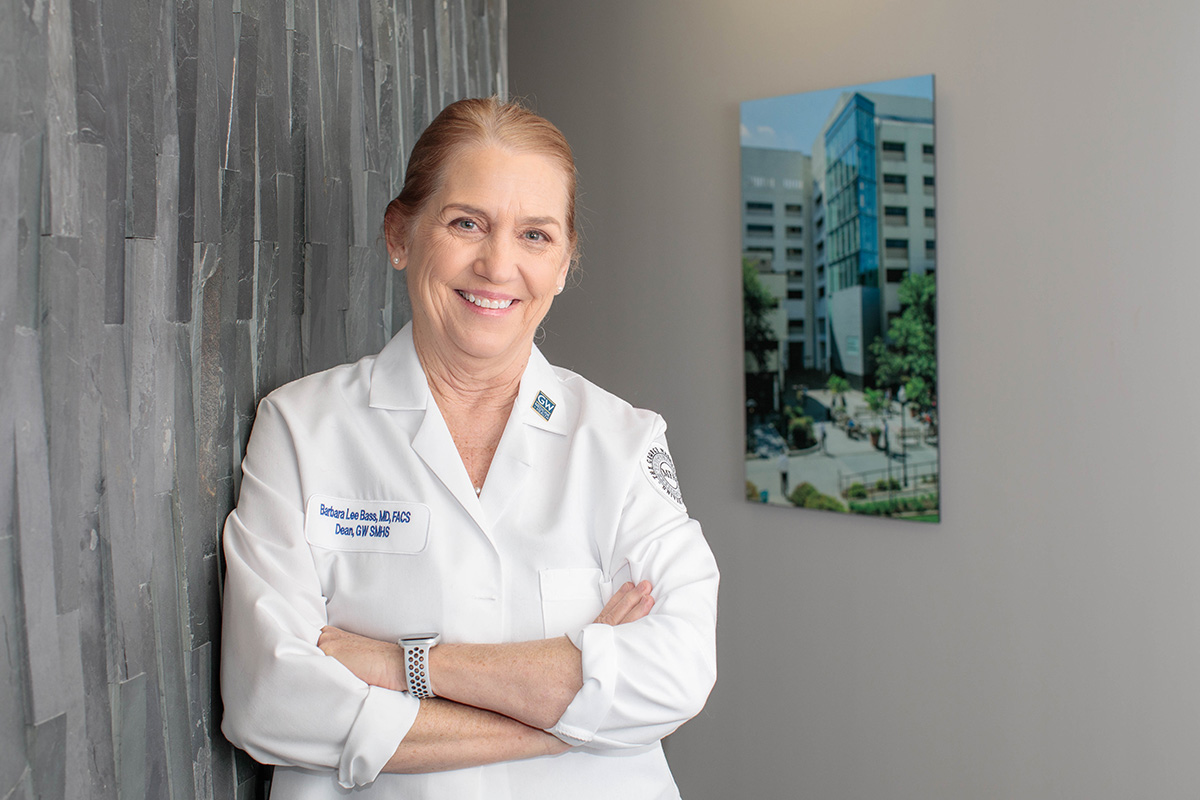 Bass said the medical foundation from UVA has served her well throughout her career as an academic surgeon, educator, investigator and leader. (Photo courtesy of the George Washington University School of Medicine and Health Sciences)

For her accomplishments as a leader in academic medicine and her efforts to improve the training of surgeons, Dr. Barbara Lee Bass has been selected as the University of Virginia’s 2022 Distinguished Alumna.

Bass, a 1979 graduate of the UVA School of Medicine, is the first woman to serve as vice president for health affairs, dean of the George Washington University School of Medicine and Health Sciences, and chief executive officer of The GW Medical Faculty Associates.

UVA’s Maxine Platzer Lynn Women’s Center established the Distinguished Alumna Award in 1991 to honor alumnae whose contributions at the highest level in their fields reflect the spirit of excellence and the ethic of service for which a UVA education stands. The center will honor Bass at an event in the spring.

“Through her outstanding accomplishments as a surgeon, researcher and scholar, and leader, Dr. Bass takes her place in the company of other alumnae of the School of Medicine who have been awarded the Distinguished Alumna Award,” Abby Palko, director of the Women’s Center, wrote in email. Those recipients are Dr. Vivian Pinn, a 1967 alumna who was awarded in 1992; Dr. Hallam Hurt, a 1971 graduate awarded in 2001; and Dr. Sherita Hill Golden, a 1994 alumna who received the award in 2019.

“It is an incredible honor to be the recipient of the University of Virginia Distinguished Alumna Award,” Bass wrote in an email. “The most formative years of my professional life were spent at the UVA School of Medicine – four years of deep, immersive learning and maturation guided by superb faculty physicians, scientists and educators. The core values of service, curiosity, integrity and kindness were instilled in me during those important early years, coupled to the fundamentals of medical science on which to build a lifetime of learning.”

In the late ’70s, there still weren’t many women in surgery, and the UVA chief of surgery at the time was so impressed with Bass that he put her in touch with two of the only women leading in academic surgery, Drs. Olga Jonasson and Kathryn Anderson. They became mentors and role models throughout Bass’s career, according to her medical school classmate, Tom Newbill, who has been active in the UVA Medical Alumni Association.

After completing her residency in general surgery at the George Washington University School of Medicine and Health Sciences in 1986, Bass took a research fellowship at the Walter Reed Army Institute of Research while serving as a captain in the U.S. Army Medical Corps.

She joined the GW faculty as a general surgeon and surgeon-scientist at the Washington, D.C., Veterans Affairs Medical Center.

In the GW leadership post since January 2020, Bass leads the academic, clinical and research missions and provides strategic direction on all aspects of the medical enterprise.

Her current interests include computational surgery, health services research and outcomes sciences, and clinical trials in surgical oncology, including breast cancer surgery, following two decades of bench research in gastrointestinal biology. She has published more than 170 peer-reviewed papers, as well as numerous monographs, chapters and books.

“Dr. Bass’ career has been defined by her excellence as a researcher, surgeon, educator and professional leader,” wrote Dr. David Wilkes, former dean of UVA’s School of Medicine, in nominating her. “As an educator, you will find no one more dedicated to her trainees than Dr. Bass. She has been a mentor to medical students, surgical residents, research fellows and faculty, and directly contributed to the training of hundreds of surgical residents. She has also been a strong advocate for equity and diversity for women and underrepresented minorities in health care careers and in academic advancement.”

Bass said the UVA medical foundation has served her well throughout her career as an academic surgeon, educator, investigator and leader.

“Those principles and values have guided my professional life, pushing me to serve others and to open doors of opportunity so that they, too, might find great joy in their work and grow as leaders with equal voice to advance our profession while serving our many important missions.”

The Distinguished Alumna honorees include an outstanding group of advocates, public servants, journalists, athletes, researchers and innovators chosen over the past 25 years, including 1992 graduate Dawn Staley, a basketball Hall-of Famer, multiple Olympic gold medalist and head women’s coach at the University of South Carolina; and two awardees in 2020 – Nancy Howell Agee, who earned her B.S.N. from the School of Nursing in 1979 and is CEO of Roanoke-based Carilion Clinic, and Marion Weiss, who graduated from the School of Architecture, also in ’79, who is a co-founder and partner at WEISS/MANFREDI Architecture/Landscape/Urbanism. (Weiss and Michael Manfredi also were named 2020 recipients of the Thomas Jefferson Medal in Architecture.)

“I am stunned, and immensely grateful,” Bass said, “to be recognized for simply doing the work that I have loved and been privileged to do, nearly every day, for the last 41 years.”