For This ‘Meet the Press’ Producer, Darden’s D.C. Program Was a ‘No-Brainer’ 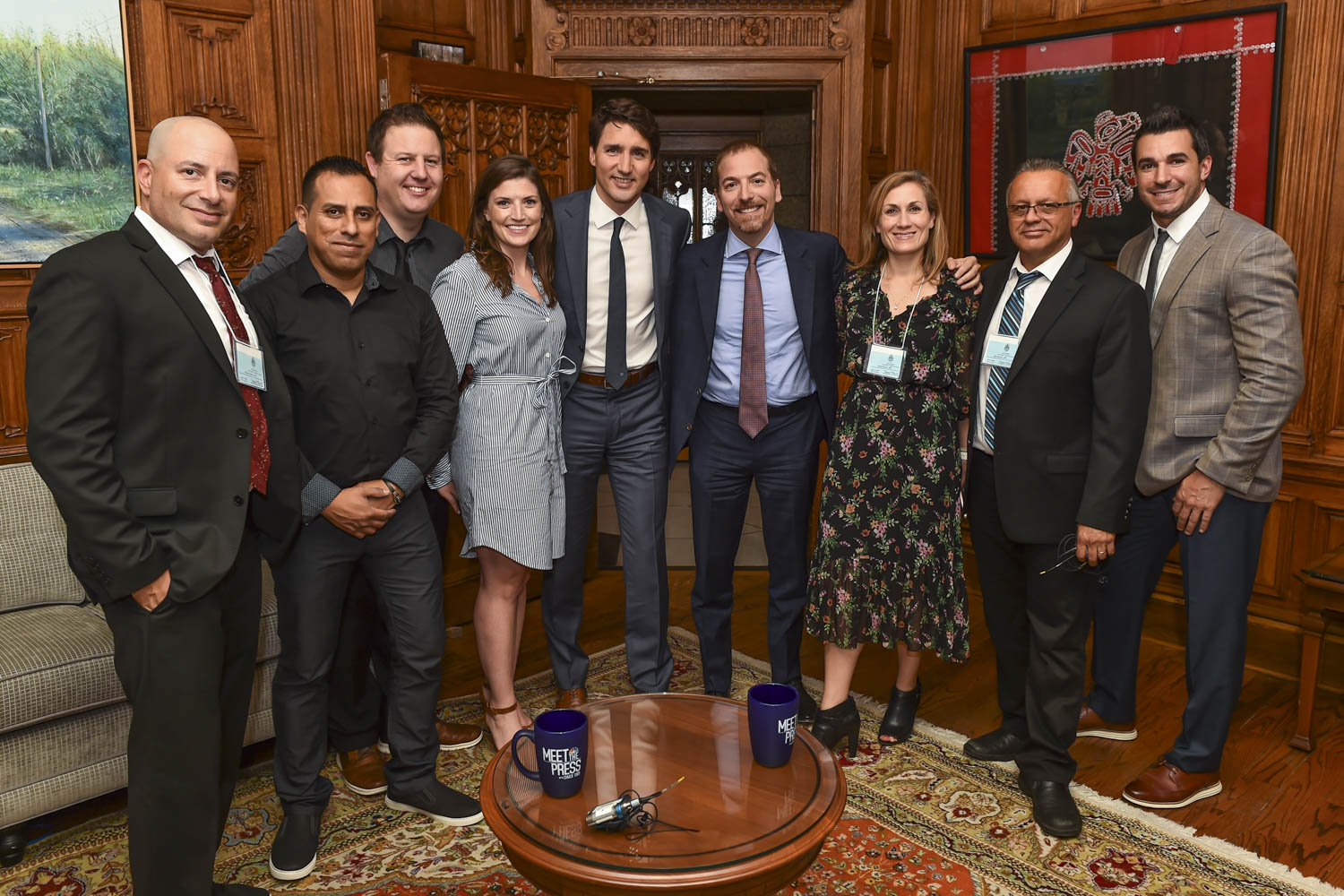 When Natalie Cucchiara began considering pursuing an MBA degree, she knew she could not be away from Washington, D.C. for long.

Cucchiara is a senior coordinating producer on NBC’s “Meet the Press.” The Sunday morning public affairs program is the longest-running show in television history, with its first broadcast airing in 1947.

Cucchiara is responsible for booking guests and managing interviews, and in today’s 24/7 breaking news environment, her job can change by the day – or more realistically, by the hour.

“Once, I had been trying for months to get an interview with [Canadian Prime Minister] Justin Trudeau. At about 3 p.m. on a Thursday, right as the NAFTA news started to break, we found out we could do the interview,” said Cucchiara, now a first-year student in Darden’s Executive MBA program. “We were on flights by 8 p.m. that night and were producing the interview, in Canada, by 11 a.m. the next morning.”

When the University of Virginia’s Darden School of Business opened its new facilities in Rosslyn, Virginia – just across the Potomac River from Washington – it opened a whole slate of new possibilities for aspiring MBA students like Cucchiara.

The new space hosts students from Darden’s Executive MBA and Executive Education programs, as well as special events and other programming. Students in both programs can choose to take classes in Washington or in Charlottesville.

Cucchiara, along with the approximately 75 other students who began their Executive MBA in Washington this year, will continue to work full-time while completing online classes and attending weekend classes at Darden’s facilities in Rosslyn. During their two years in the program, the cohort will travel to Charlottesville for two weeklong residencies and go abroad for a weeklong global residency, which Cucchiara will complete in China this spring.

We caught up with her to learn more about her work on “Meet the Press,” her decision to pursue an EMBA and how she is enjoying the Washington program so far.

Q. Tell me about your role on “Meet the Press.”

A. Right out of college, I started working at NBC as a desk assistant, the network’s entry-level rotational program for aspiring producers. I became [broadcast journalist] Chuck Todd’s researcher in 2011. He was NBC’s chief White House correspondent and political director at the time and also hosted “The Daily Rundown” on MSNBC at the time. In 2014, he took over as the moderator of “Meet the Press.” I am now the show’s senior coordinating producer. My job consists of managing field production for our interviews, booking guests and coordinating programming between our flagship Sunday show and our daily show that airs on MSNBC, “MTP Daily.”

This is a particularly busy season because of the midterm elections. We are in the midst of working on various senatorial and gubernatorial debates that Chuck will moderate, in addition to our regular programming.

Q. What do you like most about your job?

A. I am a breaking news junkie and I love the adrenaline of working in a newsroom. It never gets old for me. We usually go through a news lull after a presidential election, but that has not been the case over the past two years. There are a lot of twists and turns we are covering, and it is a fascinating time to work in journalism in Washington. It really feels like we are a part of history.

Q. How would you characterize the media environment in Washington right now?

A. Recent attacks on the press can feel very alarming, and we also know that we are struggling to keep the trust of the American people. That is a dangerous place for us to be, but the best thing members of the press can do is stick to our journalistic integrity and hope that our peers at other networks and publications do the same. Our reputations are all intertwined, and we need to keep working to prove our legitimacy and counter negative attacks.

Q. What are some of your most memorable moments with “Meet the Press”?

A. There have been some high-profile interviews that I have loved working on. In 2016, I got to produce an interview with Joe Biden, who was the vice president at the time. I was very proud of that segment. The interview with Justin Trudeau also stands out. … Chuck got the first network interview with the prime minister about such an important topic [NAFTA].

Q. Why did you decide to pursue the Executive MBA?

A. I knew two colleagues from NBC who had pursued an MBA with Darden, including one of my first bosses, Tony Capra. I enjoyed talking with him about it, and I had thought about doing it for a while. Both of my parents never graduated from college, but owned their own small businesses. My mom owned a travel agency when I was young and my dad took over my grandfather’s cheese manufacturing company. I saw what they were able to do with their businesses without a formal education and wondered how an MBA could help propel me in my career in the news industry.

In my role, I have watched how “Meet the Press” has gone from a once-a-week television show to its own news brand. We’ve expanded the flagship Sunday show to a daily cable news program, a podcast, and in 2017 hosted our inaugural documentary film festival. My involvement in this growth of the “Meet the Press” brand exposed me to the business and strategy side of the news division, which only further sparked my interest in pursuing my MBA.

I am very grateful that the Batten Media Fellowship – a scholarship awarded to an MBA candidate with a media background – made it possible for me to attend Darden. The scholarship was named for Frank Batten, who co-founded The Weather Channel and has made a tremendous impact on the media industry.

Q. What difference does Darden’s new Washington, D.C. location make for you?

A. It made my decision a no-brainer. I knew I wanted to go to Darden, but it would have been difficult to me to make the Thursday-Friday Charlottesville residencies. That is actually when we do most of bookings and preparation for our Sunday show. It is much easier for me to make the Friday-Sunday classes in Rosslyn, and the flexibility of doing some of the work online is also helpful. I always have an airplane carry-on packed, and I never know when I might have to quickly travel for a story or interview.

Q. How are you finding the program so far?

A. We just wrapped up the first of two residencies in Charlottesville, which was awesome, and started our weekend residencies. The Darden faculty and my fellow students are so impressive, and the classes have been very thought-provoking, challenging me to think in different ways. The workload is significant, but there is a “we’re all in this together” mentality among my entire cohort. I got lucky with a great learning team and we have enjoyed working together on Skype. I even met to study with one of my learning team members in person last week when I was in New York City for work.

Q. How are you applying your MBA in your job, now and in the future?

A. Darden really emphasizes leadership and management, and I am already applying some of those lessons on a daily basis. I expect they will be even more critical in the future as I look to potentially move within NBC and explore the business side of media.

A Year We Will Never Forget: 2019-20 in Review END_OF_DOCUMENT_TOKEN_TO_BE_REPLACED

‘What Will You Carry With You?’ Remarks From UVA President Jim Ryan END_OF_DOCUMENT_TOKEN_TO_BE_REPLACED