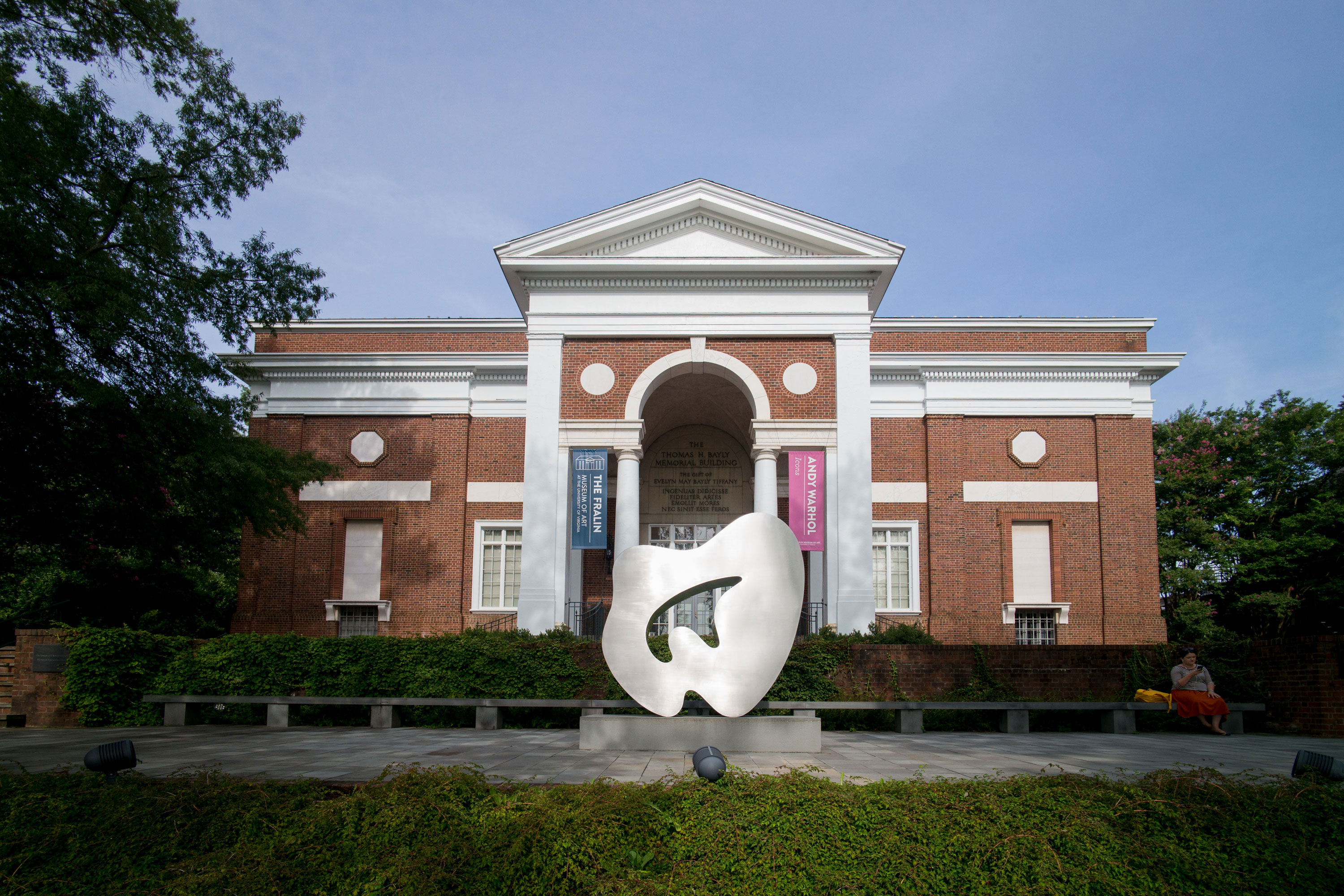 The Fralin Museum of Art at the University of Virginia has inspired generations of students who have gone on to pursue careers in the art world, becoming successful artists, curators, collectors and gallery owners or simply nurturing a lifelong love of art.

In turn, many of those alumni have given back to the museum by donating works from their personal collections to strengthen The Fralin’s permanent collection and help inspire the next generation of students.

“As a teaching museum, our primary mission is to bring students into direct contact with great works of art, because we believe that there is value and understanding about history, culture and humanity that can really only come from that experience of being in direct relation with the art object,” Matthew McLendon, the museum’s J. Sanford Miller Family Director, said.

“That’s the understanding that I think many of our alumni who give works to the permanent collection [have] – that not only will these works be cared for to the highest professional standards, but that they will have a very important life for the University which gave them so much.”

Here are three examples of how alumni donors have carried on that mission.

Michael Ripps, a 2004 graduate of the College of Arts & Sciences and a dealer of paintings by the “old masters,” has recently donated two Dutch Golden Age paintings, one by Nicolaes Knuepfer (1609-1655) in honor of art history professor Lawrence Goedde, and a second by Esaias van de Velde (1587-1630) in honor of history professor Emeritus H.C. Erik Midelfort.

Ripps described both Goedde and Midelfort as profoundly impacting his intellectual and professional pathway. 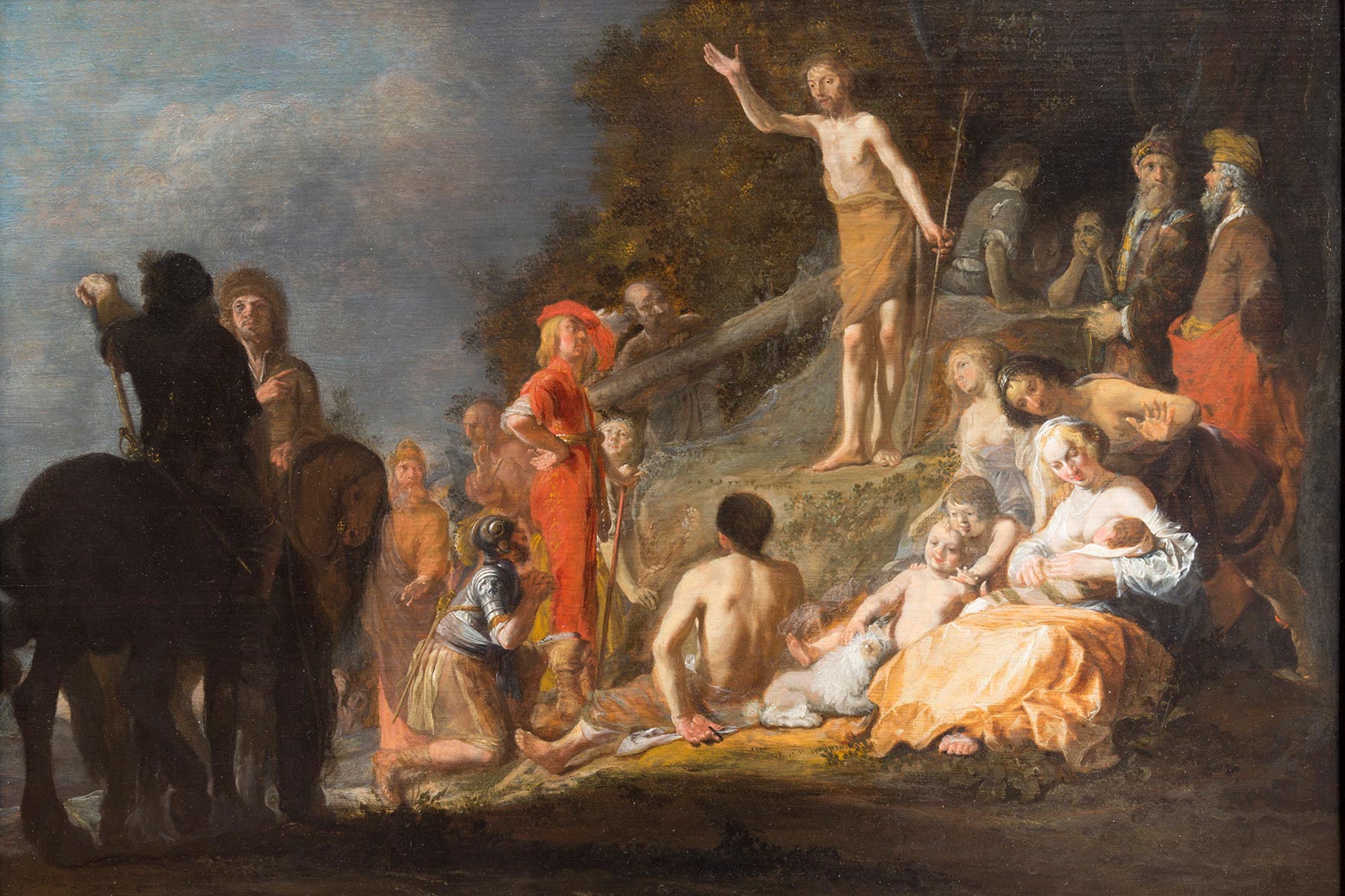 Ripps said, “I donated the paintings to provide students the opportunity to study more Dutch old master paintings at the University itself, and with the hope of encouraging fellow alumni to donate paintings to the museum – and also to consider acting as benefactors for future old master acquisitions that might create a robust teaching collection in Charlottesville.

Ripps’ vision fits well with Cynthia and W. Heywood Fralin’s mission for the museum that bears their name, McLendon said.

“One of my great joys is going around their collection with [the Fralins] because they’ll stop at every painting, they’ll tell the story about the artist, they’ll tell you why the painting is important for the artist, they’ll then tell you why they love the painting and why they decided to acquire it for the collection,” McLendon said, “and they always end with what it will mean to the students when it comes to the museum.”

A Special Gift in Honor of UVA’s First Female President

Sue Scott Stanley, who earned a master’s degree in art history at UVA in 1982, is a member of The Fralin’s advisory board and owned the Sue Scott Gallery in New York City from 2008 to 2012. She has co-published two books, “After the Revolution: Women Who Have Transformed Contemporary Art” and “The Reckoning: Women Artists of the New Millennium,” in collaboration with three other women. They are currently working on a third. 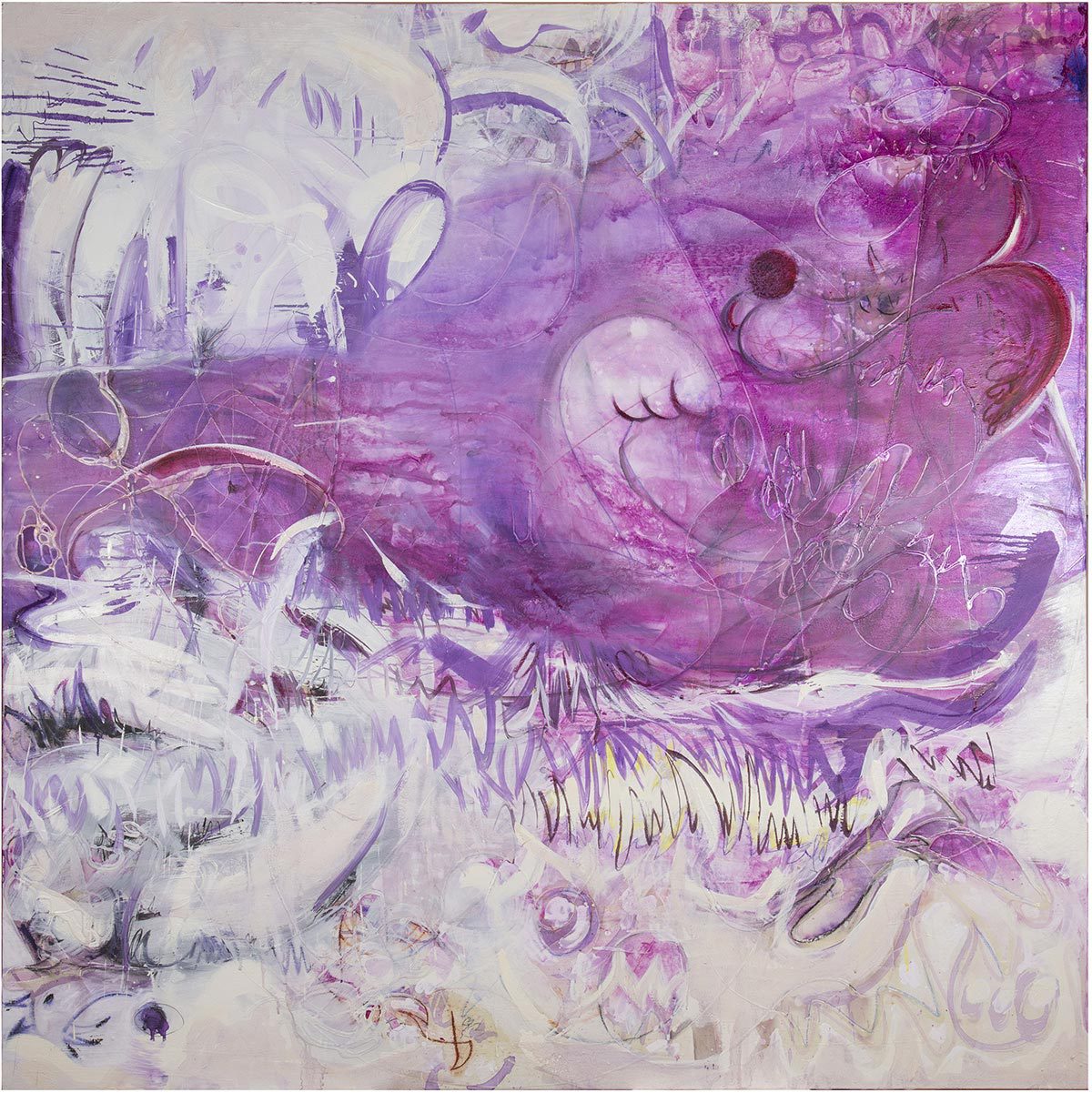 In honor of UVA President Emerita Teresa Sullivan, Scott and her husband Mike donated a large painting by recent Guggenheim Fellow Suzanne McClelland, titled “Blind Contour (Supine Spot).” Both Scott and McLendon attested to the poignancy of the gift: an alumna donating a piece by a female artist, in honor of the first female president of the University.

“In some ways, [McClelland], in the past, has said it’s analogous to the performative role of the artist,” Scott said. “Perhaps like Jackson Pollock, who performed when he painted, or performance artists and artists whose work can be seen as performance.”

Scott is enthusiastic about the educational opportunities this work has to offer students of all ages. From young children who have read the book, to art students studying “Blind Contours,” she believes there are endless possibilities for integrating this piece into the museum.

“If you have a local museum or a university museum, and you have the opportunity for students to walk in and see a painting by an artist who just won a prestigious award like the Guggenheim, who is active and working, who continues to be recognized by her peers, it’s important,” Scott said.

Scott’s donations have been in two Pine Gallery exhibitions at The Fralin. This work is the second by McClelland that Stanley has donated to The Fralin. The first, “Lullaby #57 gabriel at liftoff,” a monotype and collage on paper, was donated through her gallery to the museum in 2006. “Blind Contours” is now on display in the entrance gallery of the museum.

“It’s a vibrant, wonderful painting that I know our visitors are going to enjoy and will also enjoy learning more about Suzanne McClelland’s important career,” McLendon said.

When Kristen Chiacchia, curator at Charlottesville’s Second Street Gallery, began thinking about putting together an exhibition of painters inspired by the work of the famous 20th-century abstract expressionist artist Joan Mitchell, she knew she wanted to find an original Mitchell piece to feature alongside the five contemporary female artists.

Lucky for Chiacchia, The Fralin holds several of Mitchell’s works in its permanent collection and agreed to loan the paintings to Second Street Gallery for the first time to round out the exhibition, titled “Lady Painters.” 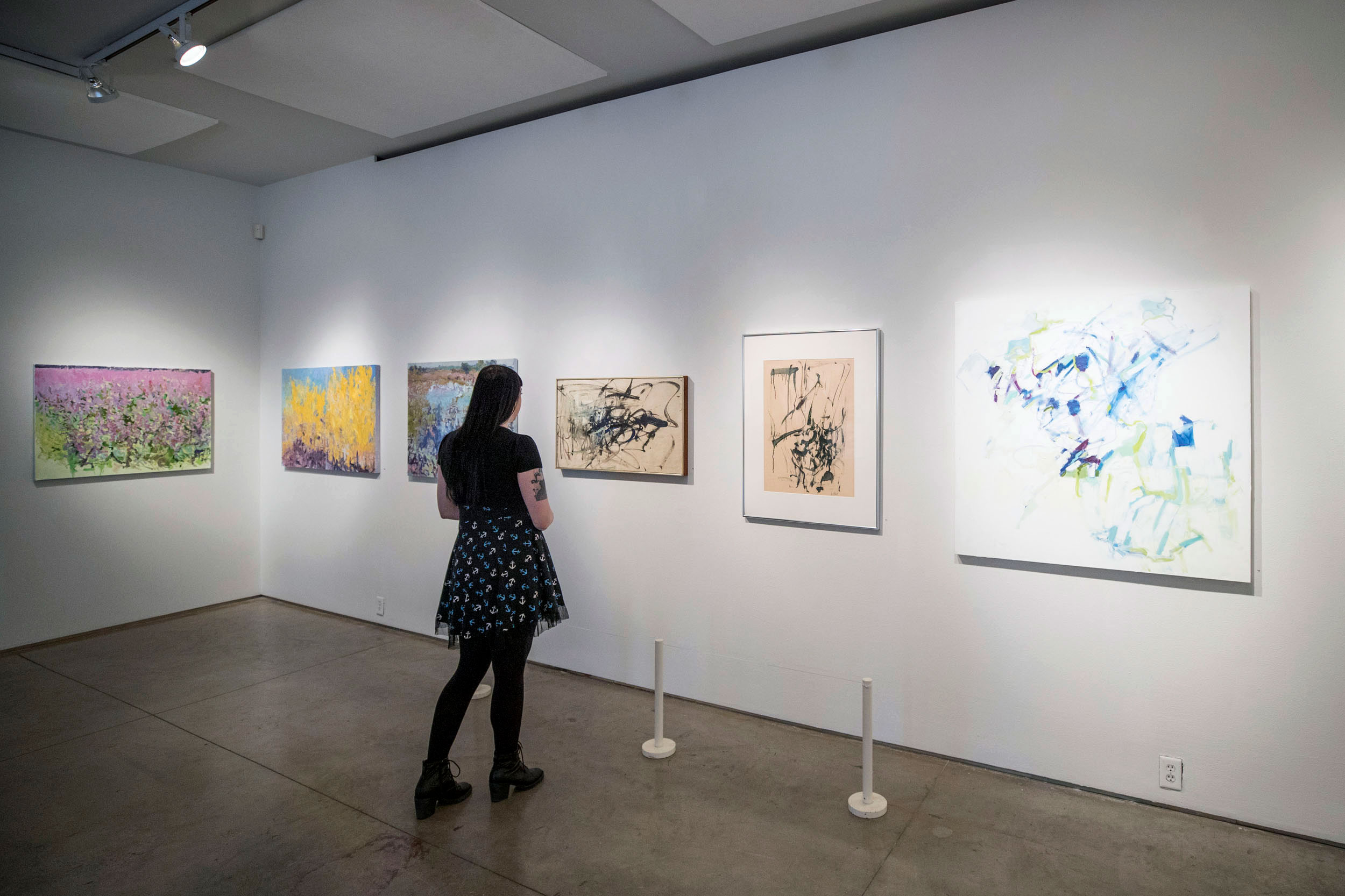 The Mitchell paintings were donated to The Fralin by another UVA alumnus, the late Alan Groh. Originally from Virginia, Groh and his partner, famed Broadway dancer Buzz Miller, donated their collection of 20th-century contemporary art, which aso includes work by Andy Warhol, Paul Thek and Marisol Escobar, to the UVA museum.

“This was another prominent alumnus of the University who actually went into the art world and played a very important role in mid-20th-century art,” McLendon said. “[Groh] really understood, by donating work to the museum at his alma mater, his legacy could continue in perpetuity.”

The two Mitchell paintings featured in the exhibition are both from 1957, painted while Mitchell was living in New York City. Chiacchia described that year as one of the most important in Mitchell’s career.

A wryly self-proclaimed “lady painter,” Mitchell did not want to label herself as a part of any one movement, although technically she falls into the second generation of abstract expressionists. She stands out from other famous abstract expressionists such as Jackson Pollock due to her use of intentional brushstrokes and slower process.

Chiacchia said, “When you think of a painter like Joan Mitchell, you’ll only see [her] in places like the [Museum of Modern Art], the Tate [Modern gallery in London] or the [Virginia Museum of Fine Arts], but you don’t expect to walk into your local gallery off the Downtown Mall and have the opportunity to see an artist like this.”

Chiacchia carefully monitored temperature, humidity and lighting at the Second Street gallery, a space right off the Downtown Mall, to ensure the Mitchell paintings were displayed beautifully and safely. She believes that The Fralin’s trust in her and the gallery’s reputation will create a bridge between the two institutions and the local community, and hopes to display more works from the museum in the future.

Fall Is in the Air on Grounds END_OF_DOCUMENT_TOKEN_TO_BE_REPLACED