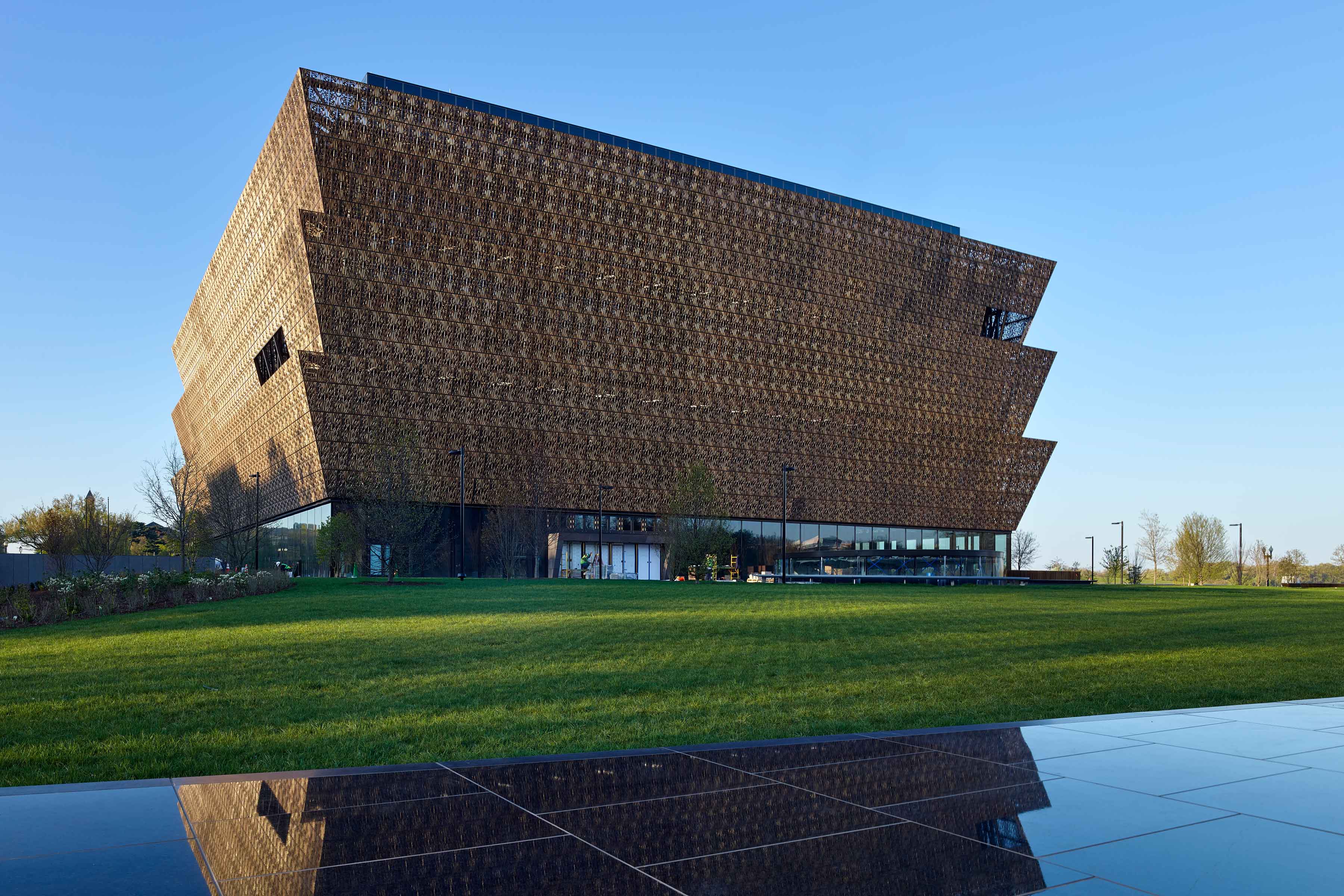 The project occasionally reminded 1987 University of Virginia graduate Michael Russell of his college days. He was working with classmate Zena Howard, a 1988 School of Architecture graduate; and a UVA professor, Elizabeth K. Meyer, was reviewing their work.

The stakes, however, were much higher. All three were working on the Smithsonian Institution’s highly anticipated National Museum of African American History and Culture, which opened in September.

Russell is now the chief executive officer of H.J. Russell & Company, which partnered with Clark Construction and Smoot Construction to build the museum. Howard led a team of architects from her firm, The Freelon Group, and three other firms: Adjaye Associates, Davis Brody Bond and SmithGroup. Meyer is one of seven presidential appointees to the U.S. Commission of Fine Arts, which advises the government on designs for landmarks, memorials, public buildings and landscapes in Washington, D.C.

They were among several UVA alumni who had a hand in the museum’s creation.

“This was the most rewarding project I reviewed during my four years on the commission,” Meyer said. “Discussions during our design reviews were memorable, as we knew the stakes were high for this project, on that site. Each member of the design team – from architects, landscape architects and engineers to the contractor and client – found innovative ways to enrich the museum as an artifact and an experience.”

Howard and her team won the Smithsonian’s international design competition with a distinctive three-tiered design, highlighted by an ornate bronze corona. 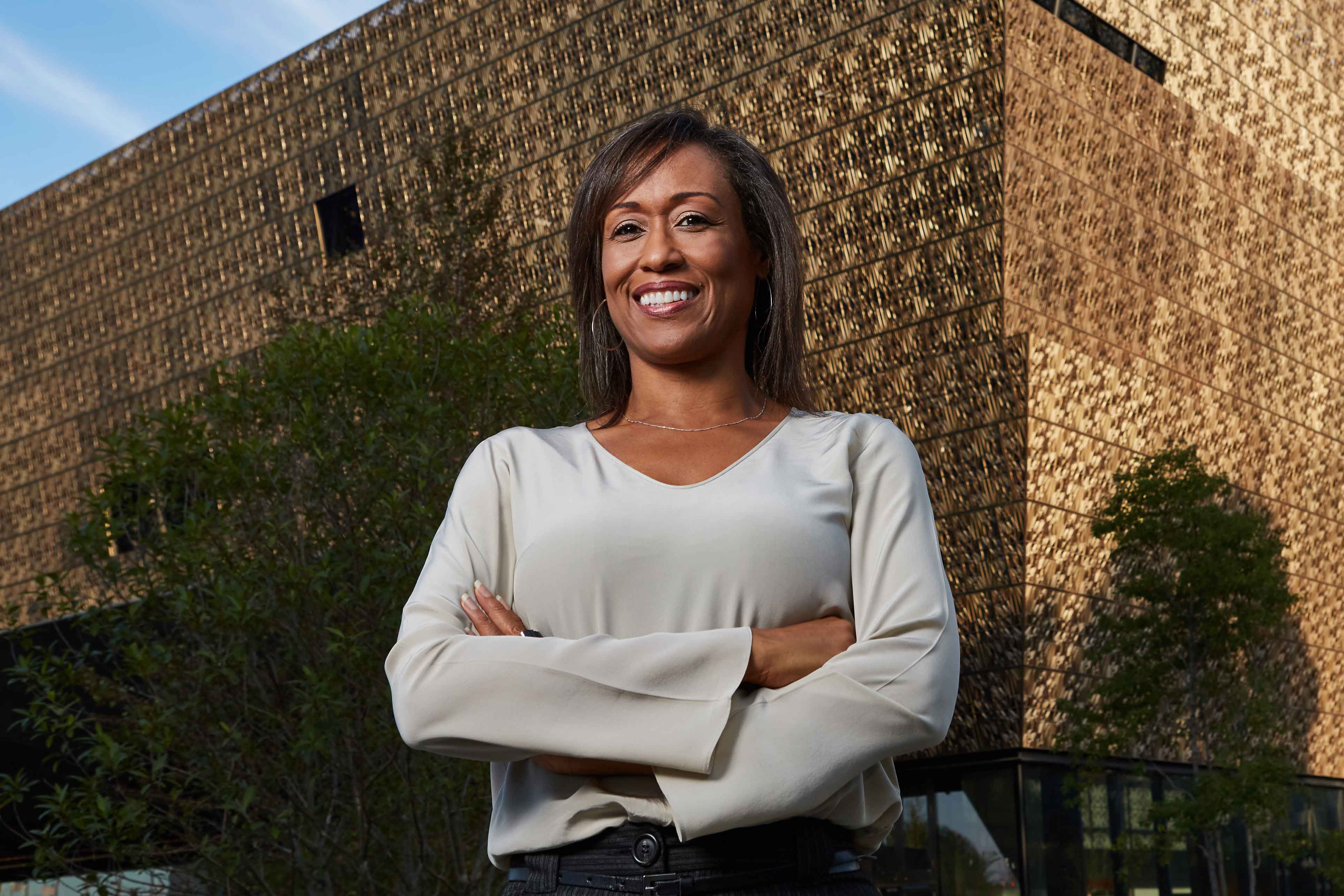 Each element aligns with the museum’s mission to share and celebrate African-American heritage and culture. The three-tiered shape, for example, references a crown worn by Nigeria’s Yoruba ethnic group, while the corona honors ironwork crafted by African-Americans in the southern U.S., and a 60-foot deep porch celebrates traditional gathering spaces in African-American communities.

Inside, visitors move upward from subterranean slavery and civil rights exhibits to brighter celebrations of African-American culture. Strategic spaces in the outer corona control heat and light – important for the building’s LEED Gold certification – while framing spectacular views of the National Mall.

“As a UVA student, I never would have thought that I would be a significant part of designing a museum that is so important to this country and also represents my culture and heritage as an African-American,” said Howard, whose parents were active in the Civil Rights Movement during the 1960s. “I don’t think their generation ever thought that this country would take a stand to tell that story in such an honest way. It means a lot.”

Russell, who studied civil engineering at UVA, now leads the Atlanta-based construction firm founded by his father. He worked with architects and Smithsonian officials to make sure that their vision became reality. 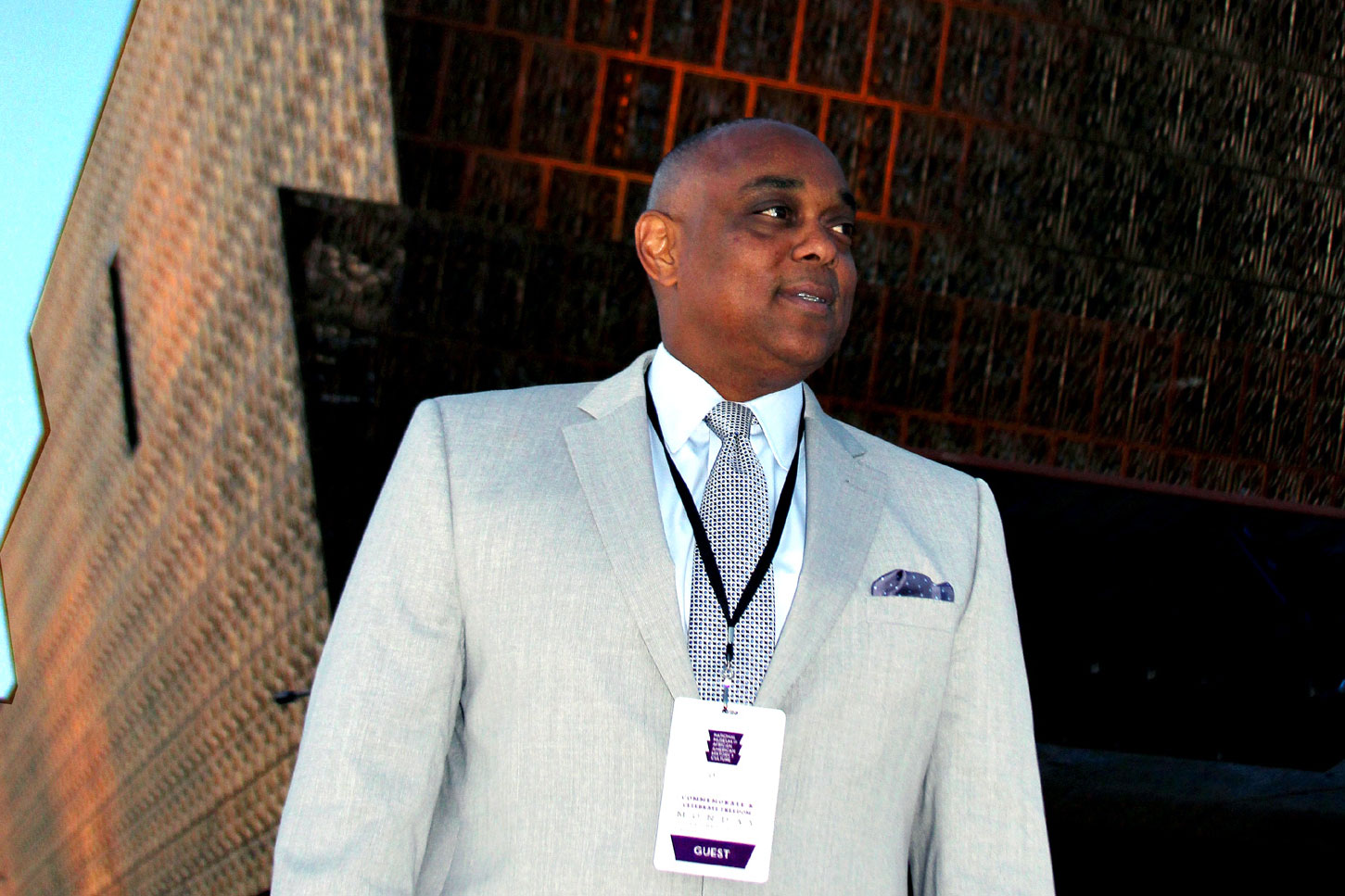 Russell, above, visited the museum shortly before its opening last month. (Photo courtesy of Michael Russell)

The corona posed a unique challenge, as did preparations surrounding the site itself. The team excavated 70 feet down and had to divert an underground creek, while monitoring the water table to avoiding destabilizing buildings like the nearby Washington Monument. Successfully negotiating these challenges and bringing the museum to life stands among the proudest achievements of Russell’s career.

Emily Draper, a 2010 alumna who majored in history and African-American studies, now working as an advancement associate at the museum, threw herself into the $540 million capital campaign, half of which relied on private donations. She witnessed many aspects of the museum’s creation – even taking tickets during opening week.

“Seeing the range of emotions on so many faces as they walked through the door is something I will never forget,” she said. “It has been incredible to see support coming from all corners of the country and across the globe.”

Rodrigo Abela, who holds UVA master’s degrees in architecture and landscape architecture, was one of two principal landscape architects representing his firm, GGN. Their work integrates the museum with the National Mall, which Abela calls “the country’s public space,” while reflecting its unique mission. 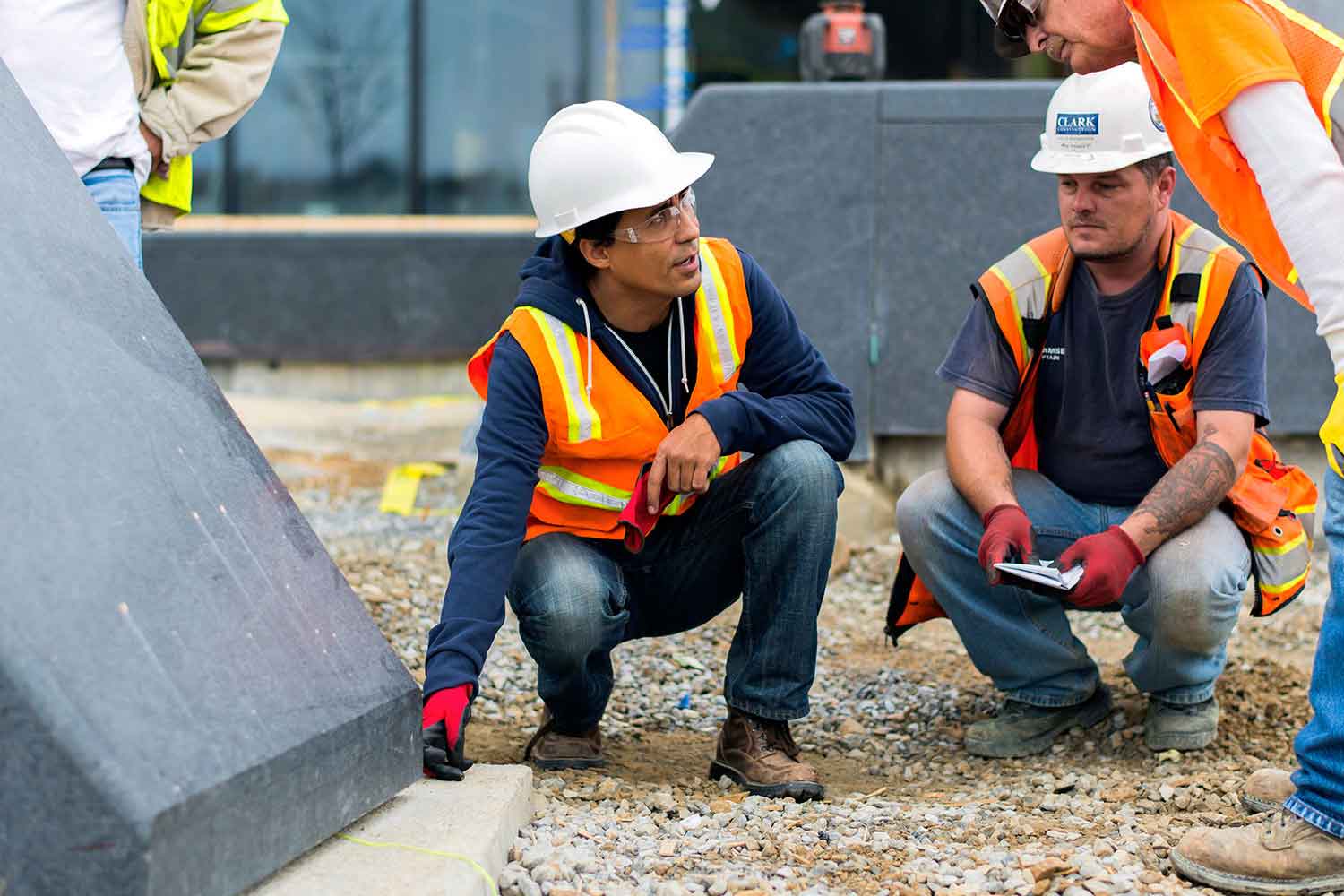 Abela, left, on site during the museum’s construction. (Photo courtesy of GGN).

The landscape’s features include a granite wall tracing a former canal likely built by slaves, and a reflecting pool mirroring the Washington Monument. Abela’s team also selected plants for the site based on museum director Lonnie Bunch’s themes of spirituality, resiliency, hope and optimism.

“We planted close to 400,000 crocuses on the lawn, which will bloom right at the end of February, one of the first flowers to come up after a long winter,” Abela said. “Fittingly, February is Black History Month.” 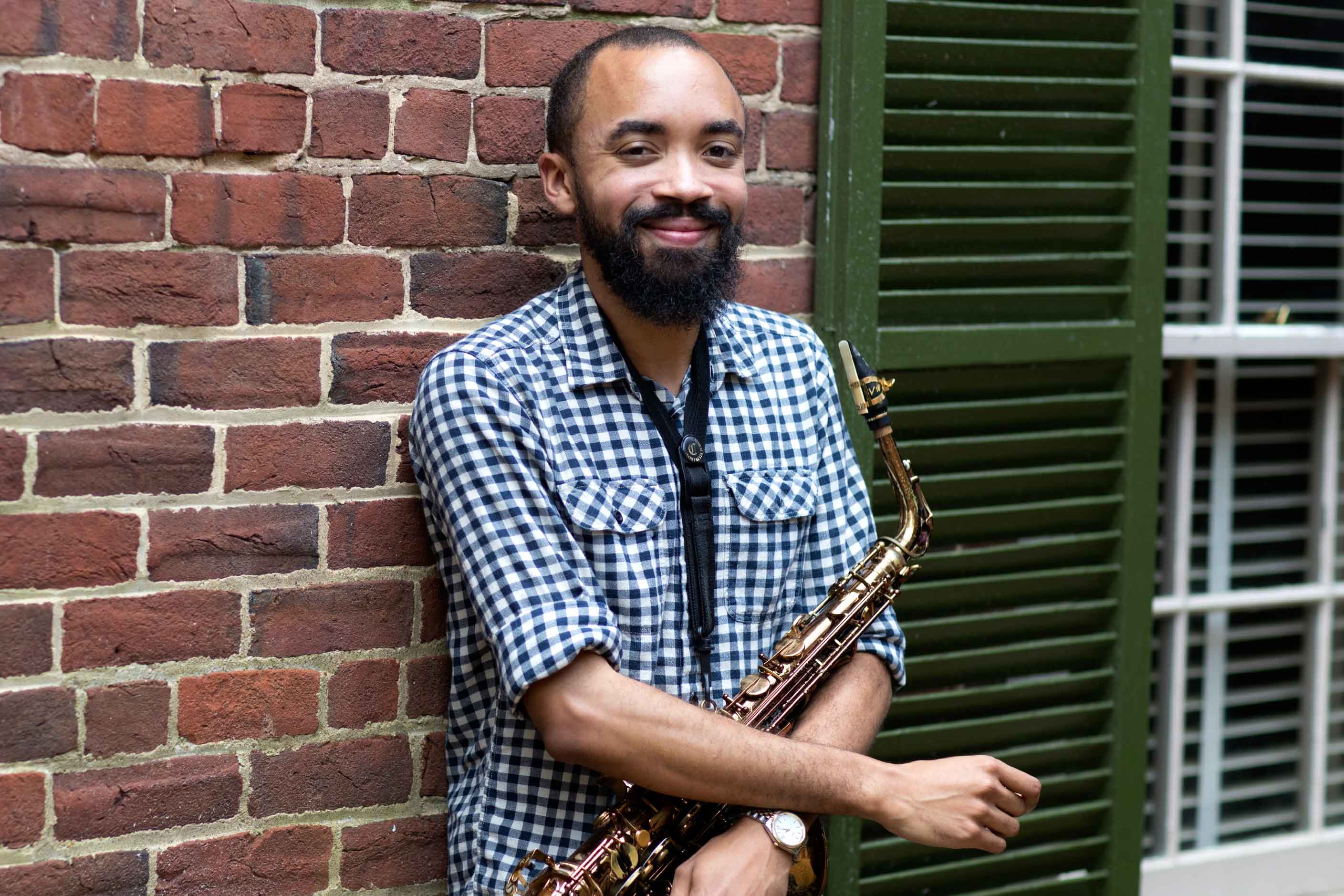 “It has been a privilege to take what I do as a scholar and make it accessible to other people of color and anyone interested in African-American history,” Lewis said. “A key point the museum makes is that black history is also the history of all Americans. We are all heirs of this history.”

1985 architecture alumna Mabel Wilson literally wrote the book on the new museum, called “Begin with the Past: Building the National Museum of African American History and Culture.” Wilson, now an associate professor of architectural design and history at Columbia University, traces the museum’s development from initial discussions of an African-American memorial in 1915 to the 2016 opening. 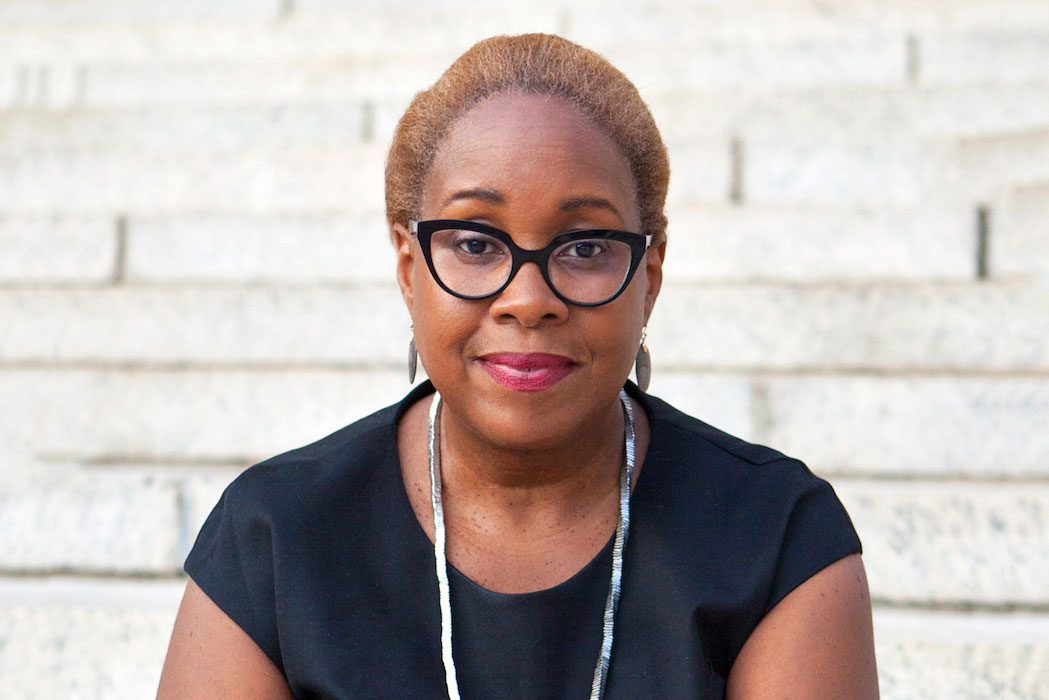 Wilson hopes that the book and the museum will jump-start discussions across the country.

“I think the museum will be very powerful, and given recent events around the nation, hopefully serve as a touchstone to think about how the things that we are talking about today are the outcome of history,” she said. “America is an unfinished project, and the museum contributes to that conversation.”

At UVA, There Is a Club for Everyone END_OF_DOCUMENT_TOKEN_TO_BE_REPLACED