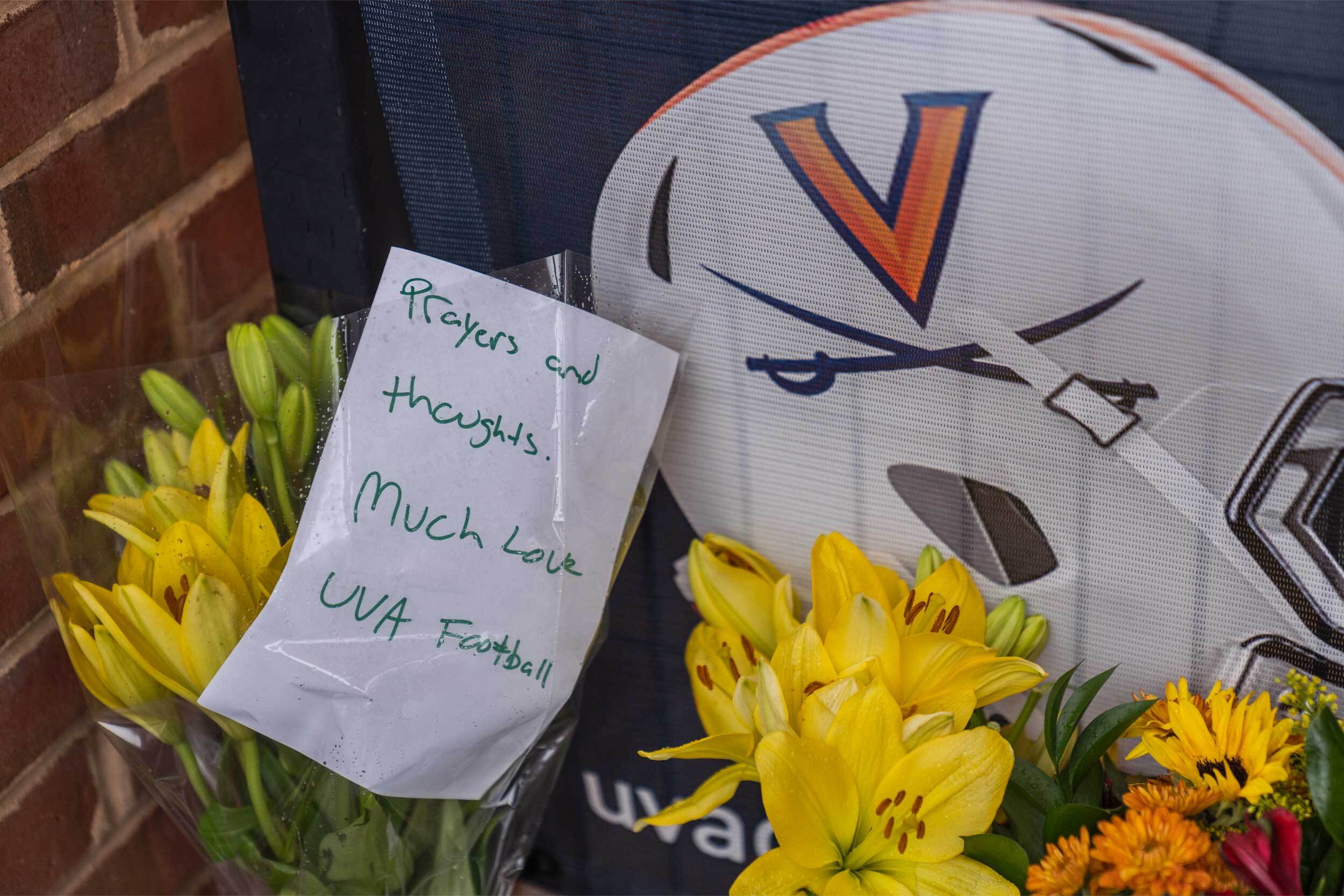 Flowers and notes with expressions of sympathy line the gates of Scott Stadium. (Photo by Erin Edgerton, University Communications)

The University of Virginia will hold a public memorial service on Saturday at 3:30 p.m. at John Paul Jones Arena to honor the lives of the three students slain in a shooting on Sunday, and to offer support for two additional students who were wounded.

The University’s Department of Athletics also announced on Monday that the home football game against Coastal Carolina University, originally scheduled for Saturday, has been canceled.

In a video message to the University community on Wednesday evening, President Jim Ryan said the memorial will be open to all, and also will be livestreamed. It will provide an additional opportunity for the community to gather to honor the lives of Devin Chandler, Lavel Davis Jr., and D’Sean Perry, who were killed, and Mike Hollins and Marlee Morgan, who suffered injuries in the shooting.

“I hope you are taking care of yourselves, taking it easy on yourselves, and leaning on each other,” Ryan said in the message. “You have been through an extraordinarily difficult experience, including the loss of three students and the injuries to two others, but also a 12-hour ordeal of sheltering in place – and the fear and uncertainty that attended each one of those hours, whether you are a student, faculty, staff member or parent.” 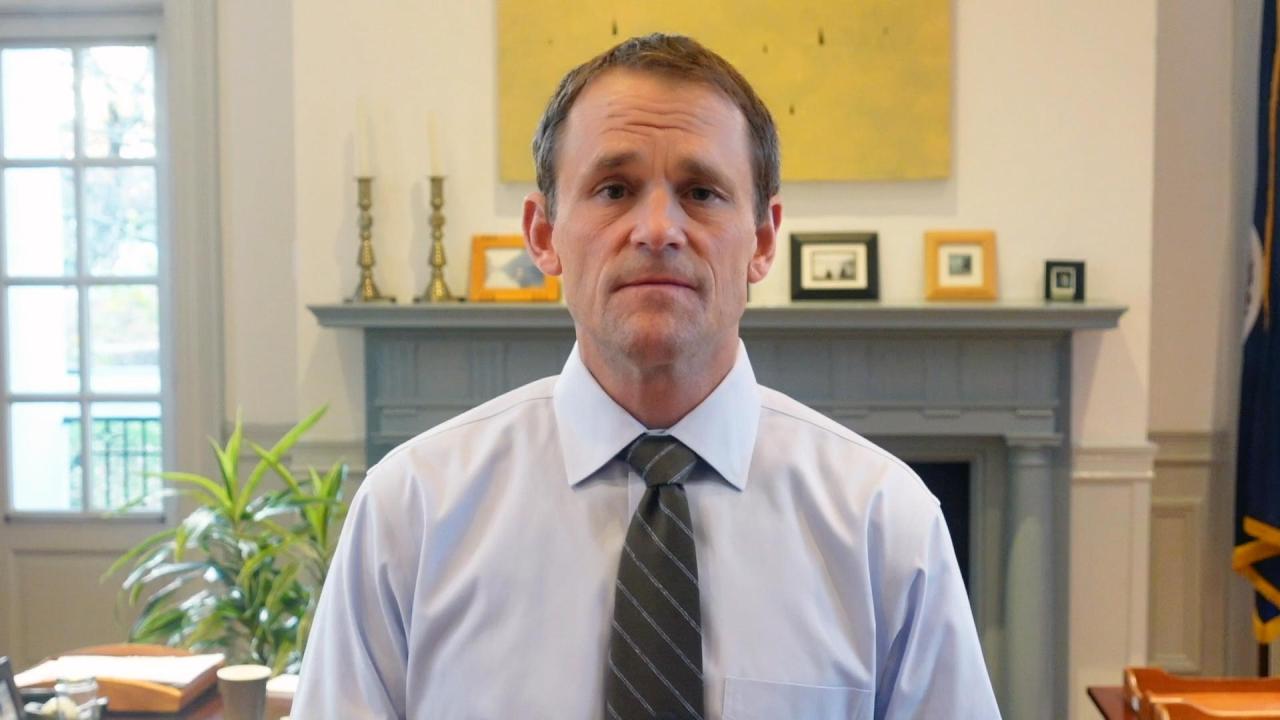 Student leaders put together a silent vigil held on Monday evening, which was attended by hundreds, and the University said then that it would plan to organize a more formal memorial service as soon as possible. Ryan thanked the students for the silent vigil, as well as academic leaders and faculty, who have accommodated students as the community continues to deal with the emotional weight of the incident.

Ryan encouraged members of the University community to support one another, and to seek support services such as walk-in counseling. And he said that while the criminal investigation proceeds, UVA will invite an external review of its interactions with the shooting suspect to consider whether the University did all it could to prevent or avoid the tragedy.

“This will likely take a while, but we will share – and act upon – what we ultimately learn,” he said in the message. “It’s possible, and perhaps even likely, that we will never find one single thing that will explain this. It may also be that we never truly know exactly why this happened. But what we learn, we will share.”

Ryan also addressed the shared struggle of dealing with grief while attempting to return to something that feels more normal after a traumatic experience.

“Shared grief – as the vigil showed – is a keen reminder that it is our bonds with each other and with a common community that give us the strength to endure and that are more real and powerful than our perceived differences,” Ryan said. “I hope all of us can carry that knowledge with us in the days ahead and can continue to draw strength and comfort from one another.”

The University of Virginia football team has announced its home game against Costal Carolina University on Saturday has been canceled.

The game on Saturday would have been Virginia’s final home game of the season. A decision about the season finale, scheduled for Nov. 26 at Virginia Tech, has not been made at this time.

UVA first-year head football coach Tony Elliott said Tuesday that some of the questions he’s receiving from his players concern the next steps in their healing process.

What is the right way to go forward?

“I think you have a football team that is grieving, that is hurt, but that is also very self-aware that this situation is bigger than football and it transcends football,” Elliott said during a news conference at John Paul Jones Arena. “They understand that football has an opportunity to show its beauty. They understand that this institution and this community has an opportunity to show its beauty through this tragedy.”

"Our program will continue to uplift their program, University, and community in our prayers as they continue to navigate this difficult time,” Chadwell said. “We all stand in solidarity with UVA."

Ticket refund information for the Coastal Carolina game will be issued at a later time. See VirginiaSports.com for more information.

A memorial decal that honors Chandler, Davis and Perry will been seen on the helmets of various Virginia-based college football programs as they play their games this weekend.