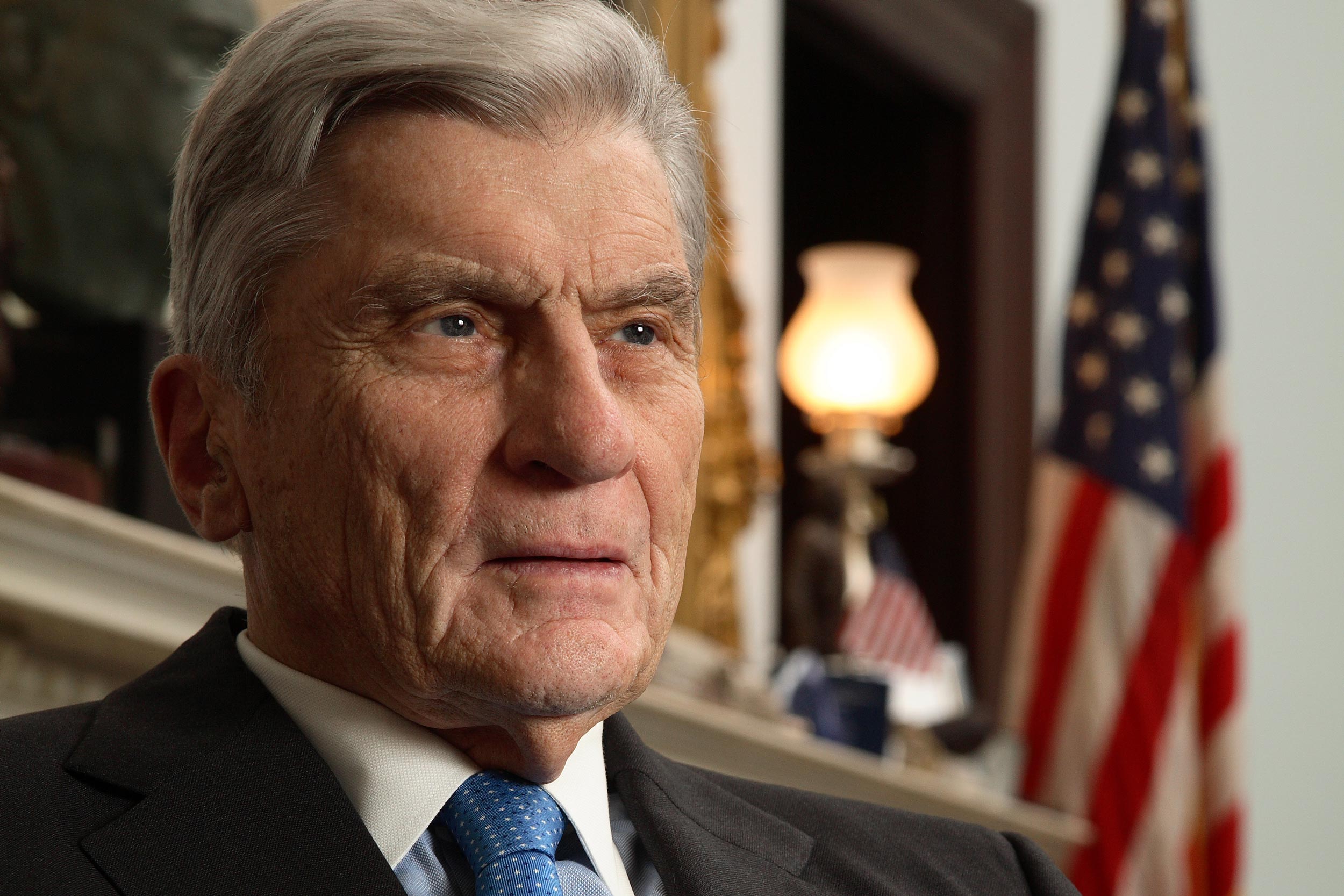 John W. Warner, a 1953 graduate of the University of Virginia School of Law who served for five terms in the U.S. Senate, died Tuesday at 94.

A Republican known for his appeal to moderates and for working across the aisle, and remembered in the media Wednesday as much for his refined manner as his military expertise, Warner held the second-longest tenure of any Virginia senator.

He was a veteran of both World War II and the Korean War – experiences that shaped his career. Among his many roles, Warner served as secretary of the Navy, chair of the Senate Armed Services Committee and director of the U.S. Bicentennial celebration in 1976. In 2014, a nuclear-powered submarine was named in his honor, the USS John Warner.

News of his death resulted in an outpouring of sentiments from public figures.

UVA President Jim Ryan, a 1992 UVA Law graduate, remembered Warner for his legacy of finding “common ground” in the interest of accomplishing governmental and societal goals.

“I join citizens from the commonwealth and across the nation in recognizing and celebrating his lifetime of extraordinary service and leadership,” Ryan said. “In his commitment to finding common ground with those with whom he disagreed, and in his dedication to the success of our nation, he was a model to us all. I extend my condolences to Senator Warner’s family and to all those whose lives he touched.”

“John Warner was a consummate statesman and a public servant who always put Virginia before politics; who put the nation’s security before partisanship; who put the country’s needs above his own,” said Sen. Mark Warner (no relation), a former political opponent who now holds the seat he occupied.

“Virginia, and America, have lost a giant,” Virginia Gov. Ralph Northam said in a separate statement.

I join my colleagues, fellow Virginians and the country in mourning the death of former U.S. Sen. John Warner ’53, an extraordinary public servant equally dedicated to promoting the nation’s welfare and to finding common ground. https://t.co/k2RPEb4R0x

Warner retired from the Senate in 2009, not long after participating in an extensive interview for UVA Lawyer magazine. In the article, Warner said his first year of Law School was “one of the most enlightening years” of his life. Up to that point, he had enlisted in the Navy at the end of WWII, in January 1945, then graduated from Washington and Lee University in 1949. While Warner was in law school, the Korean War began and he decided to serve again, this time in the Marine Corps.

After serving as a ground officer with the 1st Marine Aircraft Wing, he returned from active duty to resume his studies.

“It was a bit of a challenge to get my mind oriented toward the life of a student after having served in Korea,” Warner said for the spring 2007 issue of the alumni magazine. “Had it not been for the faculty’s warmth and interest in me, particularly Dean [F.D.G.] Ribble, I wouldn’t be here as a senator today.”

Warner attributed some of his success to his professors, including Leslie Buckler, Charles Gregory and future Dean Hardy Cross Dillard, a 1927 graduate of the School of Law. “They were a tremendous force upon my life and recognized that I needed a little more inducement and support to buckle down.”

Warner had hoped to be a federal clerk, but Ribble told Warner that since he wasn’t on the Virginia Law Review, his chances were slim. Still, Ribble helped him land an interview with Judge E. Barrett Prettyman on the U.S. Court of Appeals for the District of Columbia. (Prettyman’s son was School of Law classmate E. Barrett Prettyman Jr.)

“I spent six or eight weeks memorizing every opinion he’d written in the nine years he’d been on the bench,” he said for the UVA Lawyer interview. “When we met, I said to him, ‘If I can’t answer any question about any opinion that you’ve ever written, chuck me out.’”

Warner got the job.

After the clerkship, in 1956, Warner served as an assistant U.S. attorney for the District of Columbia, in the trial and appellate divisions. He married banking heiress Catherine Conover Mellon in 1957, and they had three children: Virginia, John W. (a 1986 graduate of the College of Arts & Sciences) and Mary. He joined the law firm Hogan & Hartson in 1960, making partner in 1964, but left the firm in 1969 to assist Richard Nixon’s presidential campaign. 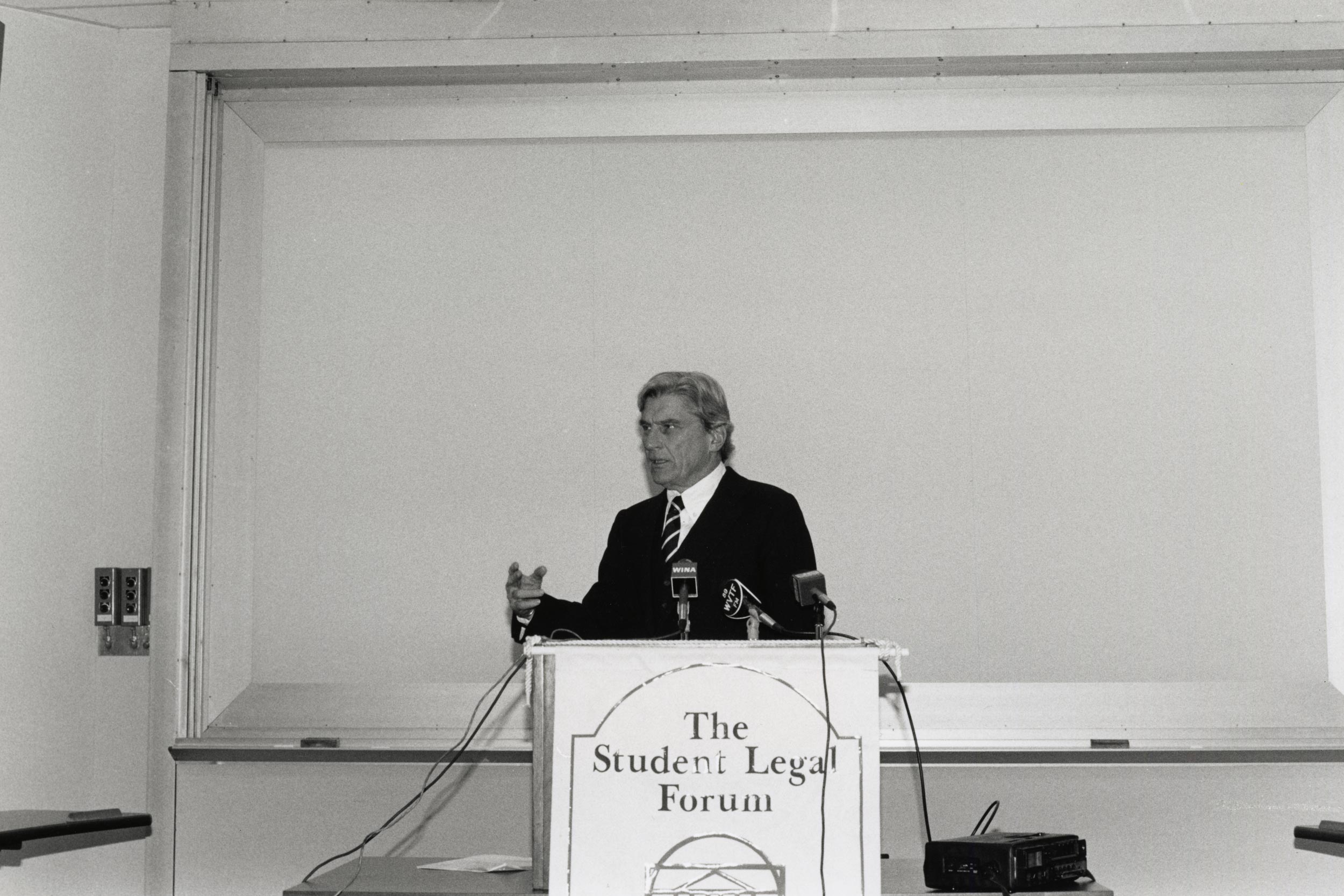 “It was my introduction to politics,” Warner told UVA Lawyer. “Nixon was looking for people who had the right talents. They wanted me to be an advance man, the individual who accompanies the candidate out into the state and looks after all the details of putting together an event. Fascinating job. Best job for a young person in politics.”

When Nixon won, Warner was appointed undersecretary of the Navy, then secretary in 1972. He and his wife divorced in 1973.

Warner met actress Elizabeth Taylor when the British ambassador asked Warner to escort Taylor to an embassy party for Queen Elizabeth’s visit, as part of the bicentennial events of 1976. The couple married that December (and later divorced, in 1982).

Warner won his first Senate election in 1978. His significant legislation included being a co-sponsor of America’s Climate Security Act of 2007, which proposed a market-based “cap and trade” approach to dealing with the greenhouse gas emissions associated with climate change. He was also an important voice in deterring future torture and abuse in the war on terror, arguing that violations of the Geneva Conventions by the U.S. can only harm American prisoners in the future.

In addition to serving on the Armed Services Committee, he served on the Environment and Public Works Committee; the Senate Committee on Health, Education, Labor and Pensions; and the Senate Select Committee on Intelligence.

Even before he entered elected office, Warner was focused on protecting the nation and its military through law and policy. His signature accomplishment as U.S. secretary of the Navy was executing the U.S.-Soviet Incidents at Sea agreement. The 1972 pact forged by Warner and his counterpart, Soviet Navy Commander-in-Chief Fleet Admiral Sergey Gorshkov, instituted provisions to avoid unintended naval engagement between the two superpowers – and to avoid escalation in the instance of encounter. 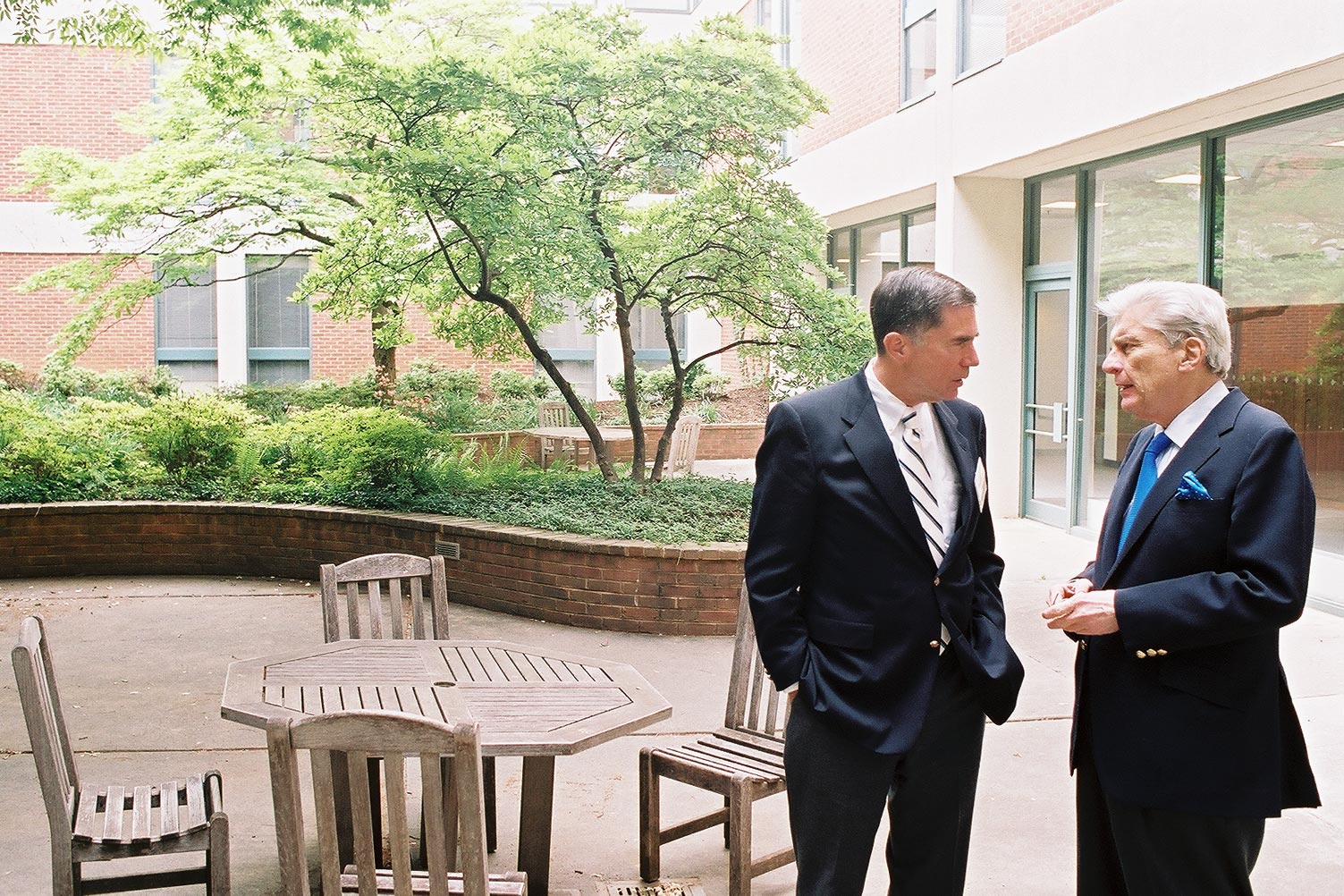 In 2008, Warner won the Thomas Jefferson Medal for Citizen Leadership.

In 2009, he auctioned off some of the items he collected from public life and donated the proceeds to a  School of Law scholarship fund.

“Sen. John Warner was a successful politician, but he was much more than that. He was a true public servant,” said law professor John C. Jeffries Jr., a dean of the School of Law from 2001 to 2008 and a 1973 graduate of the school. “He always put his country first. All Virginians – indeed all Americans – should mourn his passing.”

Warner donated his official papers to the UVA Library, which were first made available in 2017.

Last year, he participated in a podcast for UVA’s Sorensen Institute about his career.

Warner finished out his legal career at his original law firm – today called Hogan Lovells – as senior counsel. Senior Counsel J. Warren Gorrell Jr., a 1979 School of Law alumnus who previously served the firm in chair and CEO roles, said Warner was a model for how to care about and serve others.

“I loved the man,” Gorrell said. “He was a role model, mentor, a friend and a partner to so many. His grace, dignity and compassion were extraordinary. You knew when you were with him that you were in the presence of greatness – of someone who genuinely cared about other people. He defined service, and we all should be extremely grateful for his service to Virginia and our country. I sure feel that way about him for our firm.”

According to Warner’s longtime chief of staff, he died of heart failure at home with family members, including his third wife, Jeanne Vander Myde, whom he married in 2003.

Class of 2020: Memories and Moments From a Long-Anticipated Celebration END_OF_DOCUMENT_TOKEN_TO_BE_REPLACED