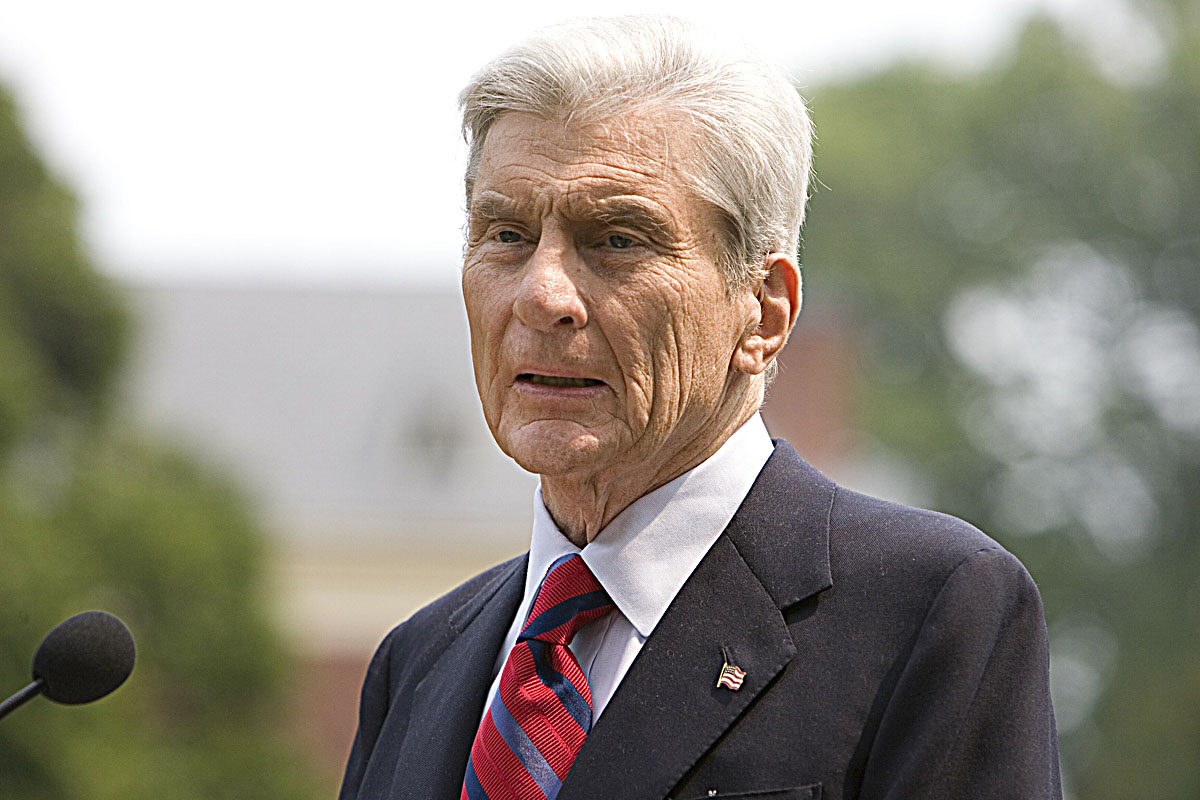 February 14, 2008 — U.S. Sen. John W. Warner of Virginia, a five-term member of Congress and former Secretary of the Navy, will be awarded the 2008 Thomas Jefferson Foundation Medal in Citizen Leadership at the University of Virginia's Founder's Day festivities on April 11.

"The University is pleased to honor Sen. John Warner with this year's Medal in Citizen Leadership," said University of Virginia President John T. Casteen III. "His numerous contributions to the public good, his strong commitment to education and his exceptional leadership make him an ideal recipient for this award. Sen. Warner's lifetime of public service has extended far beyond the boundaries of Virginia to encompass critical issues facing the nation."

The Jefferson medals are the highest external honors bestowed by the University, which grants no honorary degrees.

Warner began his public service during World War II, when he enlisted in the U.S. Navy at the age of 17. He served on active duty until the summer of 1946 and, following his honorable discharge as a petty officer third class, entered Washington and Lee University on the GI Bill. After graduating from there in 1949, Warner entered law school at the University of Virginia.

When the Korean War began in the summer of 1950, Warner left law school and began a second tour of active military duty, this time as an officer in the Marine Corps. He served for two years in Korea before returning to U.Va. to complete his law degree in 1953.

From 1953 to 1956, Warner served as law clerk for the late Chief Judge E. Barrett Prettyman of the U.S. Circuit Court of Appeals. He was appointed an assistant U.S. attorney in 1956, and served four years in the trial and appellate divisions before entering private practice in 1960.

Warner was appointed by President Gerald Ford to coordinate the celebration of the bicentennial of the founding of the United States, directing the federal role at events in all 50 states and in 22 foreign countries.

Warner began his five terms in the U.S. Senate in 1978 and is the second-longest-serving senator from Virginia in the 218-year history of the Senate. He formerly chaired the Armed Services Committee and serves on the Intelligence Committee, on the Environment and Public Works and the Committee on Homeland Security and Government Affairs.

In August, Warner announced his decision not to seek re-election to a sixth term. He chose to make that announcement from in front of U.Va.'s Rotunda, referring to the "hallowed Grounds" of the University in his remarks. Citing his 45 years of public service, Warner summarized his decision to step down from the Senate by quoting "the founding father of our nation and the founding father of the University of Virginia, Mr. Jefferson: 'There is a fullness of time when men should go, and not occupy too long the ground to which others have the right to advance.'"

When Less Is More: How Harnessing the Power of Subtraction Can Add to Life END_OF_DOCUMENT_TOKEN_TO_BE_REPLACED