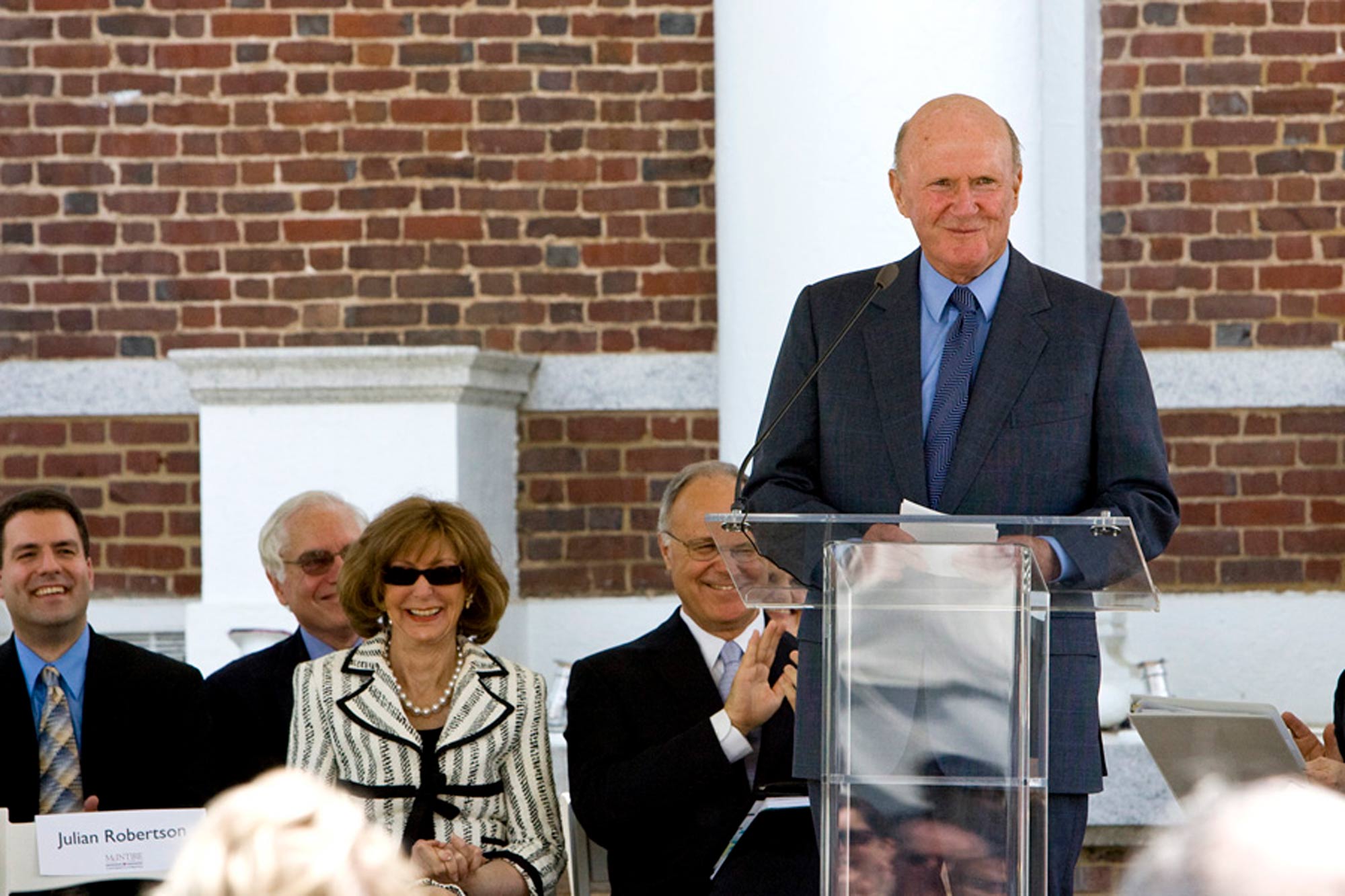 Julian Robertson addresses the crowd during the 2008 dedication of Rouss and Robertson halls as the home of the McIntire School of Commerce. (Photo by Jane Haley, University Communications)

The life and recent passing of Julian H. Robertson Jr. (1932-2022) hold significance for many across the world, but his legacy is especially profound within the University of Virginia community.

The founder and leader of seminal hedge fund Tiger Management, Robertson mentored dozens of UVA graduates and influenced generations of finance professionals with his innovative approach to investing, his tough-yet-encouraging management style, and a lifelong dedication to the power of philanthropy.

“He was not only one of the greatest investors of all time and a pioneer in the hedge fund industry, but Julian Robertson was also a great friend and supporter of McIntire and the University,” McIntire School of Commerce Dean Nicole Thorne Jenkins said. “He was legendary for consistently engaging with students in and out of the classroom, participating in events on Grounds, and for cultivating an intentional practice of giving generously with all of those whose lives he touched. As evident by his history of support at UVA and elsewhere, he was responsible for creating countless opportunities for those who shared his enthusiasm and commitment to bettering the world by uplifting others.”

Throughout the last 30 years of his life, Robertson championed many causes at the University and related initiatives. He made substantial gifts to the Jefferson Scholars Foundation, the Sorensen Institute for Political Leadership, and through his foundation, was behind donations to the student volunteer center Madison House, as well as a $2.2 million “Robertson Innovations in Education” grant supporting research to enhance teaching practices and student learning experiences.

Robertson’s philanthropic efforts were also particularly momentous at McIntire, where in this century’s first decade, he gave multiple million-dollar gifts to support the school’s strategic initiatives. In addition to funding scholarships for McIntire’s M.S. in Commerce graduate students, he was motivated to join in the school’s “Back to the Lawn” campaign, facilitating McIntire’s move to a renovated Rouss Hall and the then-newly constructed Robertson Hall, a building extension that would come to bear his name in honor of him and his wife, Josie.

The naming choice was an easy decision for Blue Ridge Capital founder and McIntire Visiting Scholar John Griffin, a 1985 McIntire graduate who made the leadership gift in honor of his mentor.

“Julian completely changed my life trajectory,” said Griffin, explaining that after meeting Robertson in 1986 and joining Tiger the following year, Robertson’s passion proved contagious. His vision, guidance and friendship would help Griffin and other “Tiger cubs” who learned under his professional care to succeed wildly.

“Through the eyes of a 24-year-old, I was inspired that I could build a career which I truly loved,” Griffin said. “Julian was the greatest mentor anyone could ever ask for. It is hard to overstate his influence on our industry when you consider how many of today’s most successful hedge funds were directly or indirectly touched by the genius of Julian Robertson.”

Another distinguished product of a career forged at Tiger, fellow Visiting Scholar Chris Shumway, a 1988 McIntire graduate and principal donor for the Commerce School’s new facility slated to open in 2025, said that Robertson provided an invaluable on-the-job education. By pressure testing his mentees, encouraging smart risk-taking, and helping shape how Shumway and his fellow colleagues thought about the science and art of investing, Robertson roused their enthusiasm to match his own boundless zeal for life and work. “He was giving so much, and so, you felt like giving your all, too,” Shumway recalled.

Part of that shared motivation came from the fact that young employees felt that they could be heard. Shumway said Robertson was never preoccupied with rank and didn’t believe that experience was tantamount to coming up with the best ideas. “Instead, he was interested in how compelling an argument is,” he said. “He valued a data-driven approach – no matter how old you were.”

Ultimately, Shumway believes that Robertson’s greatest lessons for the long list of UVA graduates who he hired and trained extends far beyond his groundbreaking investing techniques: His generous nature was taken to heart by all of those who knew him, and by teaching others to carry the same lessons forward, Robertson helped improve lives for countless people.

“Julian taught me philanthropy and he taught me how to be a good corporate citizen. By creating this philosophy of philanthropy, he really created change for the University,” Shumway said in reference to the many UVA initiatives that he, Griffin and their classmates have been a part of over the years; efforts ranged from honoring Robertson as their “enduring inspiration” with naming McIntire’s third-floor trading room for him to the aforementioned leadership gifts that have expanded the Commerce School’s footprint on Grounds.

“He was one of the good ones,” Shumway said.

Despite not being a UVA graduate himself, Robertson was highly active at the University. In addition to serving as a guest speaker at various McIntire events, he also was a fixture in his former employees’ classrooms.

Ever impressed with McIntire graduates he hired, Robertson later became interested in being involved at the Commerce School directly. His presence would become highly anticipated and recurring.

For six consecutive years, Shumway’s former employer served as a judge in his Global Macro Investing course. “Julian loved doing it. Here was a super-busy guy who had a lot going on, yet he took the time every year,” Shumway said.

During the 20 semesters Griffin has taught courses at McIntire, Robertson was a guest at no less than 18 of them. As recently as spring 2019, he addressed Griffin’s Deciding Wisely and Thinking Critically seminar. “He spoke at my very first McIntire class in 1999 and loved it, which led to many visits in person and several symposiums. He liked debating stock ideas with students and was very fond of [former McIntire Dean and current professor] Carl Zeithaml,” Griffin noted, and which Shumway echoed.

Zeithaml recalled Robertson being a popular and edifying presence. “We always knew that Old Cabell Hall Auditorium would be sold out when Julian was on the program,” he said. As such, when Griffin suggested naming McIntire’s then-new building on the Lawn “Robertson Hall,” Zeithaml was thrilled.

“We recognized that the stature of the school would be elevated on many dimensions simply by our association with him. I know that he will be remembered for his many amazing achievements in life and business, but I will always remember him as a warm, witty, honest and insightful man who was so very kind to each of us in every interaction,” Zeithaml said. “I learned a great deal from him, and we all were privileged and honored to know him.”

Interacting with Robertson was a transformative experience for many. Griffin, who called his former mentor “incredibly humble, gracious and extraordinarily intelligent,” credits him not only with leading him to professional achievements, but also good fortune in his personal life as well.

“Julian introduced me to my wife Amy (a 1998 graduate of the College of Arts & Sciences), who was friends with his oldest son. But Julian wasn’t content with just making an introduction; he kept following up and reminding me that I had better call her soon or I would be out of luck!” he said, explaining that Robertson insisted they would be a perfect match. Griffin and his wife honored Robertson by naming their youngest son and his godchild Julian after him.

Though Robertson’s name will be long remembered for a multitude of well-deserved reasons, Griffin suggested that perhaps one piece of actionable advice to be learned from Robertson’s teachings can direct others to lead a successful life: “Let your integrity be your guide.”

At UVA, There Is a Club for Everyone END_OF_DOCUMENT_TOKEN_TO_BE_REPLACED