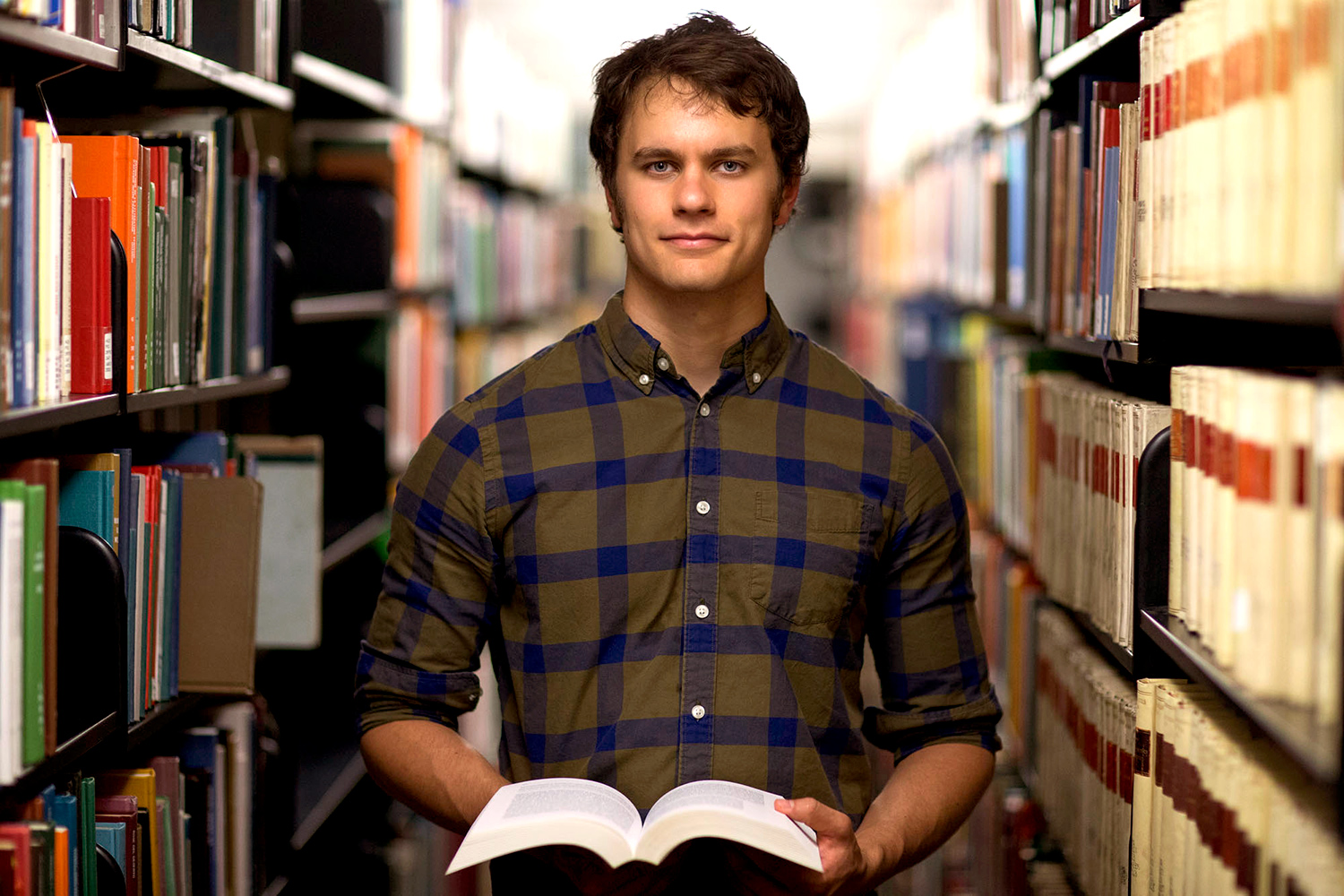 From working in a factory gluing together rubber tubes to staying with Romanian water polo players when he visited their country, Michael Sears spent several years between college and graduate school taking the time to reflect on where his life had brought him so far. Going through the University of Virginia’s top-notch Creative Writing Program gave him the opportunity and confidence to find insight and draw upon his experiences for his fiction.

Since earning his M.F.A. in May, Sears has received one of this year’s Henfield Prizes – among the most prestigious individual prizes available to promising authors – for his short story, “You Are Merely Part of This.” Established by the Joseph F. McCrindle Foundation, competitions are held at UVA and four other graduate creative writing programs, and each of the five winners receives a $10,000 award.

An outside judge, unknown to the students and different each year, selects the winner based on manuscripts submitted anonymously. Peter Ho Davies, a creative writing professor at University of Michigan and author of “The Welsh Girl,” “Equal Love” and “The Ugliest House in the World,” judged the UVA contest.

About Sears’ story, he said, “The succession of crisp observations here (by turns insightful and vivid), the attention to inflections of language and the finely calibrated close (both surprising and moving) made it a true pleasure to read.”

UVA English professor and author Christopher Tilghman said of his former student’s stories, “Michael Sears’ fictionalized account of his own real journey on foot through Eastern Europe and Turkey – of which this story is a part – is really a stunning piece of work.

“His protagonist is a gutsy, unruffled figure always just a little off to one side of the action, always observing in his equanimous way, always recording. The stories often take a surprising turn at the end, a moment of empathy or insight into the human heart just when one least expects it.”

After graduating from DePauw University in Indiana, having majored in philosophy and creative writing, Sears returned to his native Ohio and spent a few years working in factories, with the goal of saving money for traveling. In one of those jobs, he indeed glued together small rubber tubes into circles, and he thinks maybe they were used on motorcycles.

Sears landed in Europe in 2012 and spent about nine months visiting major cities, including London, Paris, Rome and Prague, and hitchhiking to less familiar places as he headed generally east. Going from Prague to Istanbul, he went through Romania, which he really liked. That’s where he met the water polo players, who are seriously fierce about the game, he said. He also stayed with Gypsies for a time (not the traveling kind) and spent a week at a monastery.

“The people who lived out in the country drew their water out of wells, drove their donkey carts to town,” Sears said, describing Romania. “I’m sure my fascination comes, in part, from just plain old first-world Romanticism. But part of it is being able to see a kind of culture that's mostly vanished in more developed nations – a lot of which is beautiful and new to me – but that’s been preserved because of Romania’s economic status.”

After a year back in Ohio, he came to Charlottesville three years ago for the M.F.A. program.

He found the UVA creative writing faculty professional, supportive and helpful, he said. During college, he didn’t think he should use his own experiences in his writing, but with encouragement from his UVA professors, he learned that events could serve as a framework for a story and leave him free to be more creative in using lyrical language and other techniques.

“What’s autobiographical becomes less relevant. It’s the layer of voice that matters,” Sears said. For example, Davies mentioned that the travel story might be a familiar topic, but it’s the way Sears has written “You Are Merely Part of This” that sounds refreshing, he said.

“As for why I wrote about it,” Sears mused, “I feel like it has less to do with the places I went than the attitude I went to those places with. I guess I tried to make myself as small, as passive as I could – not out of any sort of plan, but out of a curiosity as to how people treat each other on a basic level – with no common language, very little money between us – me and whoever was giving me a ride, or some food, or company – as little pretense as possible. The more I pushed myself to the edge of the picture, the more I felt I understood the person I was with and myself.”

As he experimented with genres, Sears also took a poetry workshop with creative writing professor and poet Debra Nystrom, who then served as one of his faculty reviewers, reading the series of stories that constituted his thesis. She commented on the voices in his work.

“Whether it’s following drifting high-school girls who don’t quite know why they need to break things after dark, or listening to the shadowy mutterings of long-distance truckers marooned in a snowstorm in Romania, Michael Sears’ writing embodies the unspoken in image and drama that brings the reader into the moment at hand, to participate in the story’s un-paraphraseable discoveries.”

While Sears continues to capture in words and images some of the fragile moments in relationships and human connections, he’s working a couple of part-time jobs to pay the bills, at a used bookstore and at a gym, apprenticed as a personal trainer. That still gives him time to work on his first novel, which has the same narrator as his prize-winning story.

“The Henfield Prize is a wonderful way to recognize the very best fiction by our M.F.A. students,” said Jeb Livingood, associate director of the Creative Writing Program, “as well as a rare opportunity to help support emerging writers as they move from graduate school to a lifetime of writing.”

From “You Are Merely Part of This”:

“People stare at you: the young white man next to the middle-aged Turkish one. They wonder what you’re doing. They can’t look away. You exude something. You are like the monkey on a leash that brings children to an organ grinder they would never approach, the inch of ozone beneath a magician’s hovering feet, the suddenly produced ace, that flash of shoddy credibility. “They’re doing construction over there,” you’ll say to the tourists, or “The restaurants are better down in Taya Hatun Mah.” It doesn’t matter what you say. Like in an Escher, it’s the geometry that convinces. There’s an impossible angle between you and Reçep. People want to be convinced of it.”