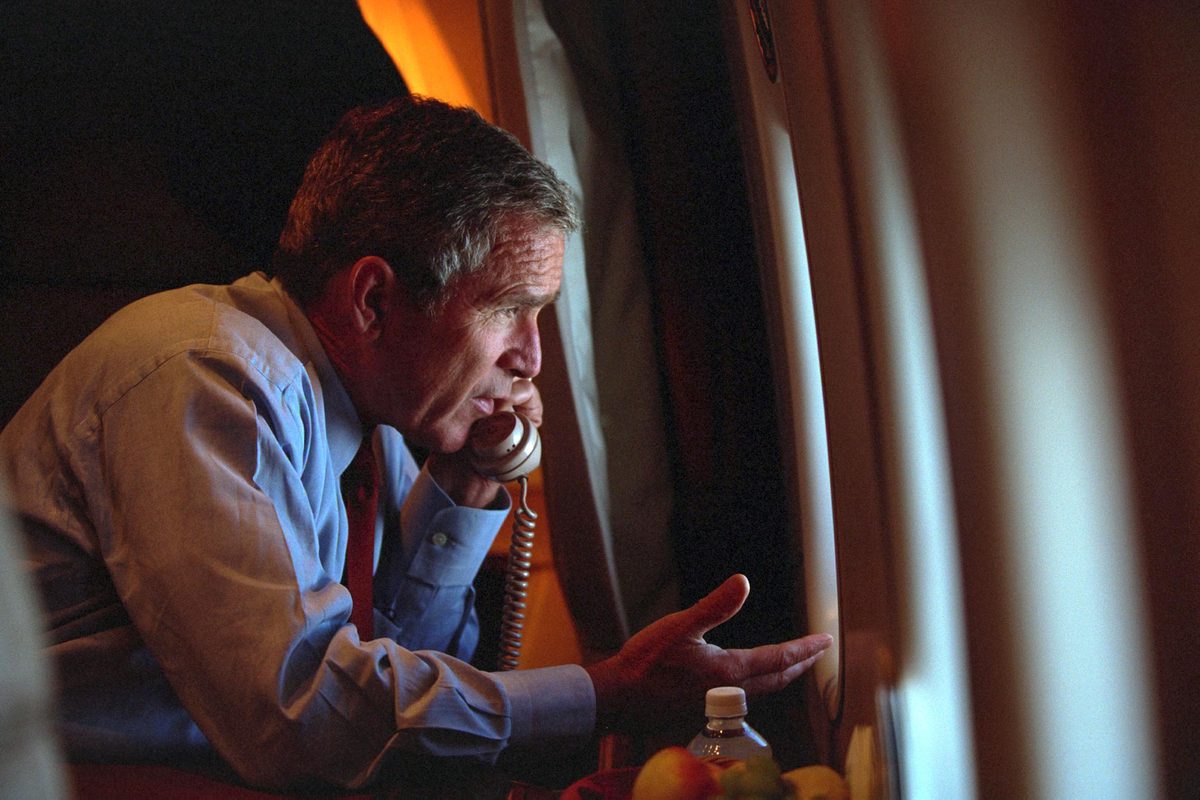 For nearly a half-century, the Miller Center has collected candid and confidential recollections from every White House from Gerald Ford to Barack Obama. These interviews of individuals and groups are conducted by Miller Center oral historians alongside leading experts in political science, history, law, business and public policy. The presidential oral history program has produced rich archives that journalists, authors, scholars, students, biographers and practitioners have relied on to illuminate the inner workings of modern presidencies.

“Capturing and preserving the thoughts and recollections of the most senior Bush administration officials allows those of us on the outside to understand better how decisions were made,” Miller Center Director and CEO William Antholis said. “These detailed insider portraits are essential for knowing how they worked behind the scenes to set priorities, shape public debates and make critical decisions.”

The Miller Center’s presidential oral history interviews are widely praised and cited for their scholarly rigor and independence. Each interview begins with extensive research on the public record of the interviewees and how they carried out their policy and governing responsibilities. Teams of scholars conduct the interviews, drawing on their expertise on policy issues, the institutional structure and history of the White House and executive branch processes. A typical interview ranges over two or more days. More than 100 outside scholars have participated in past interview panels.

The combination of confidentiality for the interviewee, deep research, subject-matter scholarly expertise and delayed release of interview transcripts produces a unique historical record. As President George H.W. Bush noted, “For my presidency, and for others, the Miller Center is a place that gets history and preserves it for future generations.”

Here are just a few insights from the newly released interviews.

Stephen Hadley, national security adviser: [My wife] Ann tells me that I called in the afternoon about 3 o’clock and simply said, ‘Are you OK?’ She said, ‘Yes, I’m OK. I’ll talk to you when I can talk to you.’ But there are a million stories. Ann’s story is, she’s at work and she learns that there have been the attacks. She learns somehow, whether it’s over the radio or someone comes in and tells her that there’s a report that there’s a plane headed toward the White House. Heading to Washington and it may be headed to the White House. What she does is she leaves her job, goes down, gets in the car to go pick up our two daughters, one who’s at, I think, I have to work the dates, but I think they’re at two different schools. Maybe they’re both at St. Patrick’s or maybe one is at St. Patrick’s and one is at Holton-Arms. She says if the White House is going to be hit and the girls’ father is going to be killed, I don’t want them to hear about it at school in a room full of children; I want them to hear about it at home with me.

On blame for the failed assessment that Saddam Hussein possessed weapons of mass destruction:

General Michael Hayden, director of the Central Intelligence Agency: When we look back on it, I think no one disagrees that it was mishandled. But I also point out that it’s our fault, not the president’s, not the vice president’s. This is tradecraft on the part of the intelligence community.

[Former Clinton Chief of Staff and CIA Director] Leon Panetta had written a little bit when he was out of government about the administration cooking the intel, and the very last thing I said to him as I left the building was, ‘Leon, that’s just not right. We just got it wrong, … You’ve got to stop saying it. It was our fault. We just got it wrong. Nobody pressured us.’

On lobbying reluctant Republicans to support a costly Troubled Asset Relief Program (TARP) to deal with the 2008 financial crisis, which arguably staved off a depression:

Karl Rove, senior adviser: Then [we] had to peel people off one by one [to vote for it]. Bush – this is where eight years of having cordial relations with the Congress and going out of his way to develop a personal relationship was so critical. Bush is really good at remembering your wife’s name, how many kids you’ve got, developing a cordial relationship, giving you a nickname, campaigning for you and so forth. Then it really paid off, because at the end of the day we would not have passed this had he not been able to take some members, Spencer Bachus and others, and convince them. ‘You’ve got to come across to do this. I don’t like this any better than you, but the future of the country is at stake.’ That personal connection really mattered. Whatever political credit he had left on Capitol Hill was exhausted by the time TARP passed. But thank God he’d built it up. Even if he didn’t understand, he was building it up.

Ed Gillespie, counselor to the president: The first meeting I had with the president was up in his study in the Treaty Room. He was behind his desk and it was after hours, just the two of us. He was excited. He said, ‘I’m glad this worked out. I’m looking forward to working with you.’ I said, ‘I’m looking forward to working with you.’

Then we talked about the nature of the job, what he wanted from me in it and all that. He said, ‘There’s something you need to understand, though. You are great at understanding the domestic audience and the American people and the voters and how to communicate with them, but when you take this job, the president of the United States has more than just the domestic audience and you’re going to have to learn how to take the other audiences into account. Our enemies listen to everything the president of the United States says. If they detect weakness it will affect what they do. Our allies listen to everything I say as commander-in-chief, and if they sense any vacillation or backing away, they’ll be gone tomorrow.’

And he said, ‘Our troops listen to the commander-in-chief and everything I say as commander-in-chief and if they sense that I’m in any way undercutting them, that’s bad for morale, it doesn’t help them in the theater. There will be times when you’ll want me to say something that is politically beneficial to the domestic audience but would hurt the morale of our troops in the field. You just need to know that I will never do that.’

What Is the ‘4th Side’? END_OF_DOCUMENT_TOKEN_TO_BE_REPLACED