A Month After Graduation, Alum is Cutting an Album – and He Sounds Amazing 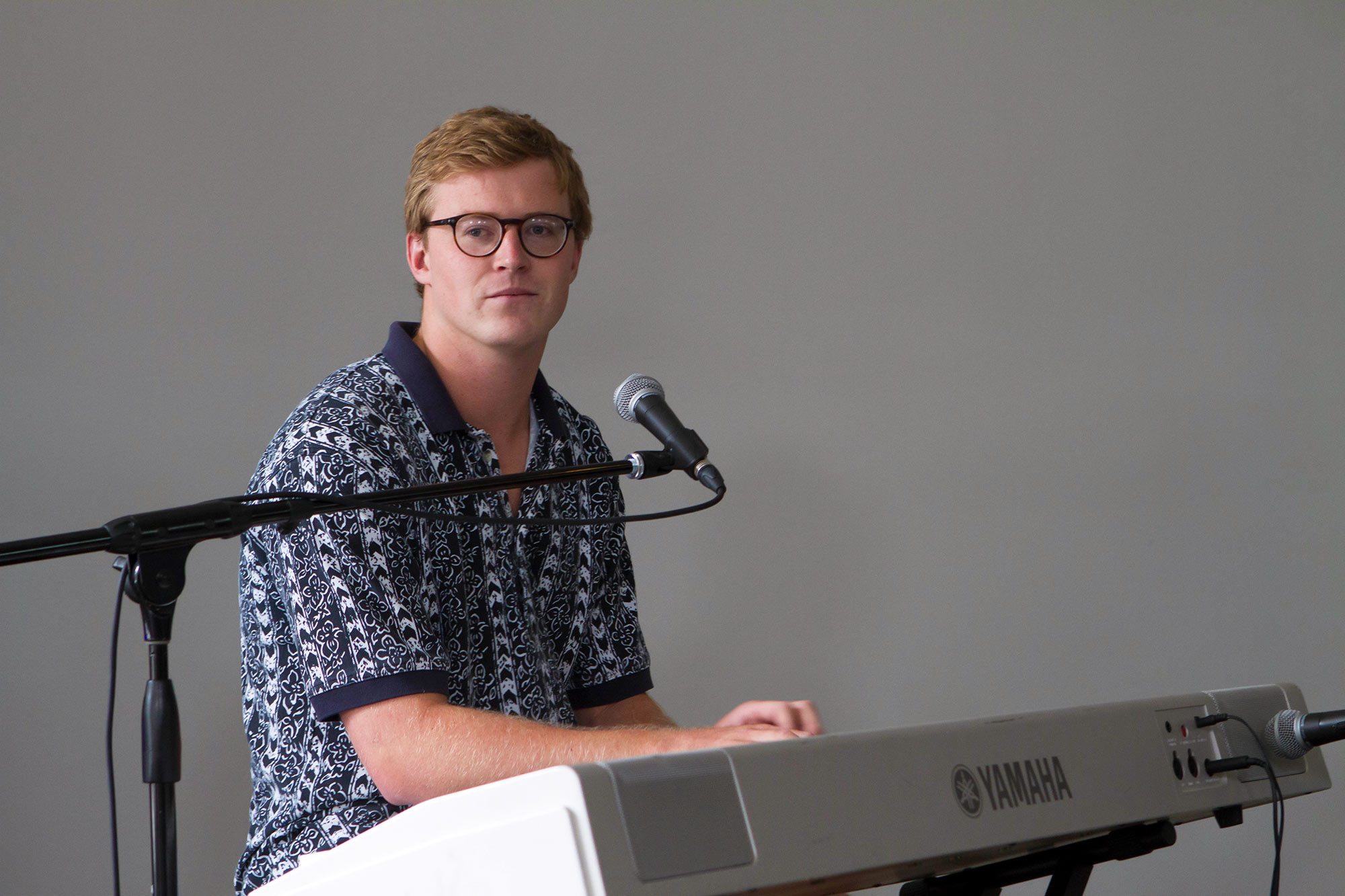 Nathan Colberg is delaying his entry into the public policy world for a year or two to test the musical waters. (Photo by Kathleen Bianchetto, University Communications)

Nathan Colberg, a musically gifted new alumnus of the University of Virginia, launched a Kickstarter campaign in April to raise $17,000 to make a full-length album, with all the professional bells and whistles that go with quality production.

He hoped to raise the money in two weeks. After people sampled some of his music, though, he hit his goal in just the first seven days, and ended up raising nearly $19,000 from 258 backers. Most are from the Charlottesville area, but he also lured donations from Kenya, New Zealand and Spain.

Colberg also recently performed on Facebook Live from 1515, the new student building on the Corner.

A former singer with the a capella group the Hullabahoos who in May collected his degree in public policy from the Frank Batten School of Leadership and Public Policy, this will be Colberg’s second studio experience.

The clean-cut Charlottesville native created an EP of five songs last winter, using the allowance money he’d saved since middle school. He gave the music to his family as a surprise Christmas gift.

One of the tracks is called “Charlottesville.” Colberg said its inspiration came from a conversation with his former roommate.

“We felt every city had a sweet song and we realized that Charlottesville didn’t really have one, or not that I knew of,” he said. “So that is where the thought was: ‘What if I wrote a song about Charlottesville?’

“It was pretty scrappy, but I got a couple of guys from the Hullabahoos to sing it with me,” Colberg said. The tune, a sentimental serenade to Charlottesville and UVA, is getting played on the local airwaves.

Don’t go, Charlottesville
Leave me by the pillars that hide you
Write me the letter that I wrote you
I’m coming back to you

Colberg’s vocal range is impressive; he can sing both baritone and tenor. He describes his early work as stripped-down pop with very simple instrumentation, usually involving a piano or guitar. That is going to change on his coming album.

“I don’t think I’ve quite tapped into the genre I want to, and that is just because I’ve only been working with limited resources in the past, so I’m actually in the process of making a new album and my guess is it’s going to sound really different from this last one, and that’s OK,” he said.

Work on the new album is still coming together, including which instruments will be featured. Colberg is hoping for more strings and a wider range of keys than his previous work, plus brass.

Daniel Levi Goans, a singer with the art-folk band Lowland Hum, is producing the album, which will be recorded this summer at studios in Louisa County and Chapel Hill, North Carolina. Goans and Colberg were introduced by Sam Bush, front man of a local band, The Hill and Wood.

“Generally, I only have the time and bandwidth to produce a few projects a year, so I am looking for a few distinct qualities,” Goans said. “From what I can tell from our interactions over the past weeks and months, Nathan has a unique combination of enthusiasm, thoughtfulness, talent, drive and humility. These traits existing together in a musician are rare and I am honored to get to team up with him on his debut album.”

The two are hoping to forge new musical frontiers. “What Nathan and I are working toward is an album that tips the hat to some of his influences and heroes, but pushes into some new territory for him,” Goans said. “Our instincts are somewhat different, and we come from different musical backgrounds. I think that navigating these differences will push this music into new spaces that will be surprising and hopefully exciting and resonant to all kinds of listeners.”

The 22-year-old’s musical tastes have a wide range. “I listen to a lot of different types of music. I like listening to other singer-songwriters, like James Bay and John Mayer,” he said. “I like bands like Sleeping at Last and Need to Breathe. I am really kind of all over the place. … I used to listen to a lot of rap when I was in high school.”

Save for a few years of piano lessons as a boy and some pointers on the guitar from a cousin, Colberg is a self-taught musician. He only came to songwriting in his third year at UVA.

He discovered his singing ability after a chance meeting at UVA’s annual activities fair his first year. His brother’s friend invited Colberg to try out for the Hullabahoos. While the UVA newbie enjoyed singing, the thought of trying out was another thing.

“It was a little scary. I was pretty intimidated, but I didn’t have anything to lose, so I was like, ‘Well, go out and give it my best, and if nothing happens, nothing happens,’” he said.

Colberg and Goans are shooting for an October release date. (And maybe even a music video. That is TBD.)