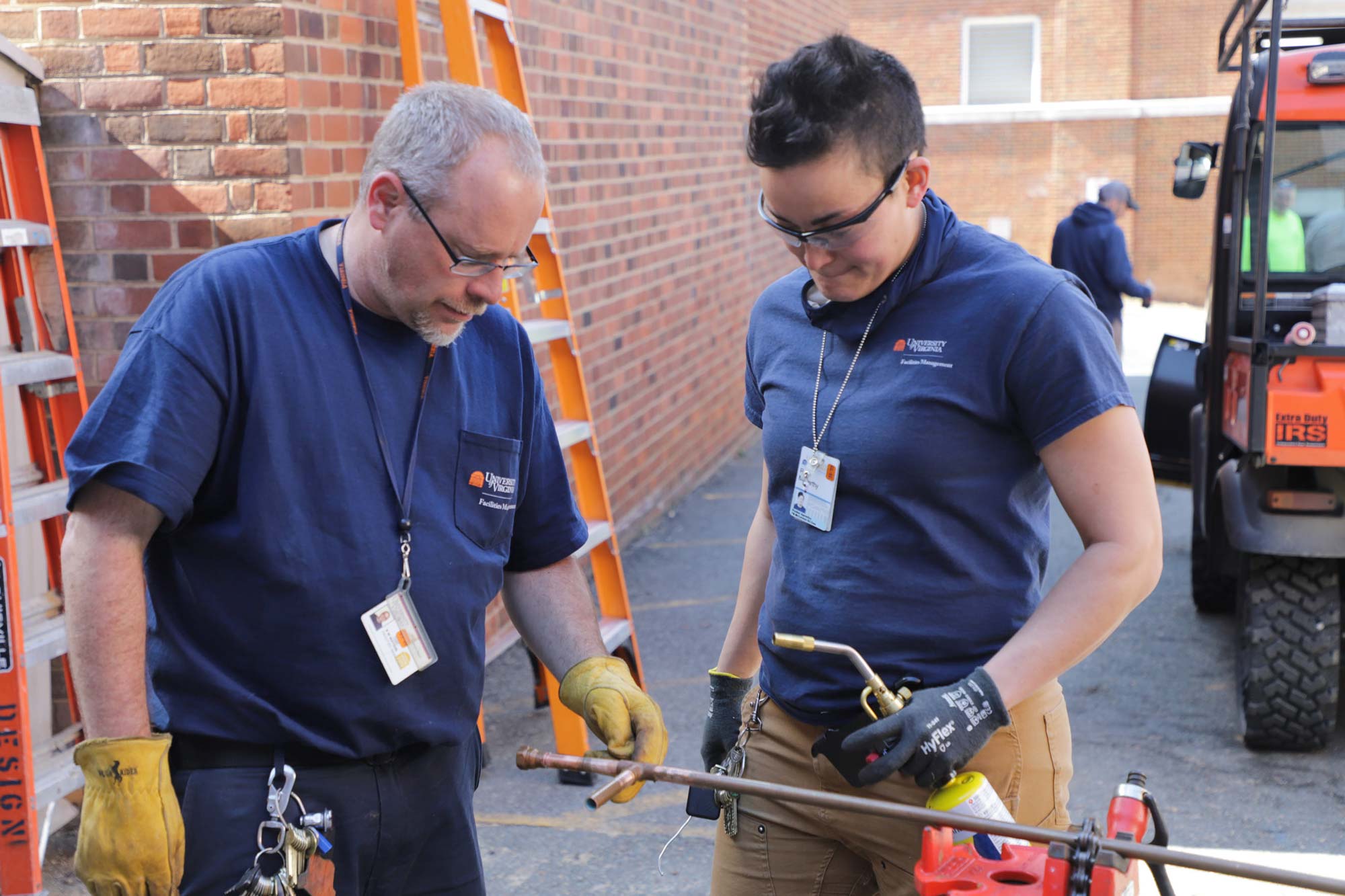 At a job fair at the University of Virginia’s Alumni Hall on April 12, the ballroom was filled with Facilities Management workers, craftspeople, managers and local contractors, as well as people looking not just for work, but for careers. Part of the throng were apprentices, already on their career path.

UVA’s apprenticeship program is one pathway for those careers, developing skilled craftspeople in trades such as plumbing, electrical, heating/ventilation/air conditioning, carpentry and masonry. At the job fair, their clothing was color-coded – current apprentices in orange shirts, their instructors wearing blue – with both groups talking to prospective candidates.

Those hired into the apprenticeship program become University employees, receive classroom training and do hands-on work. Previously, candidates selected a trade in which they wanted to work, then spent the four-year program training for it; now, candidates get two years of general training before they select a specialty to focus on for the second two years.

“We worked with the Department of Labor and Industry, our apprentice instructors and on-the-job trainers to see ‘How can we adjust this?’” said Laura Duckworth, director of occupational programs at Facilities Management. “Now we have what we call our ‘2+2 model. For the first two years, they get a general education – two years do a little of each of the trades. They get a taste of the licensed trades, HVAC, electrical and plumbing, and they get a taste of carpentry, masonry and plastering. And they also get some historic masonry in there as well.” 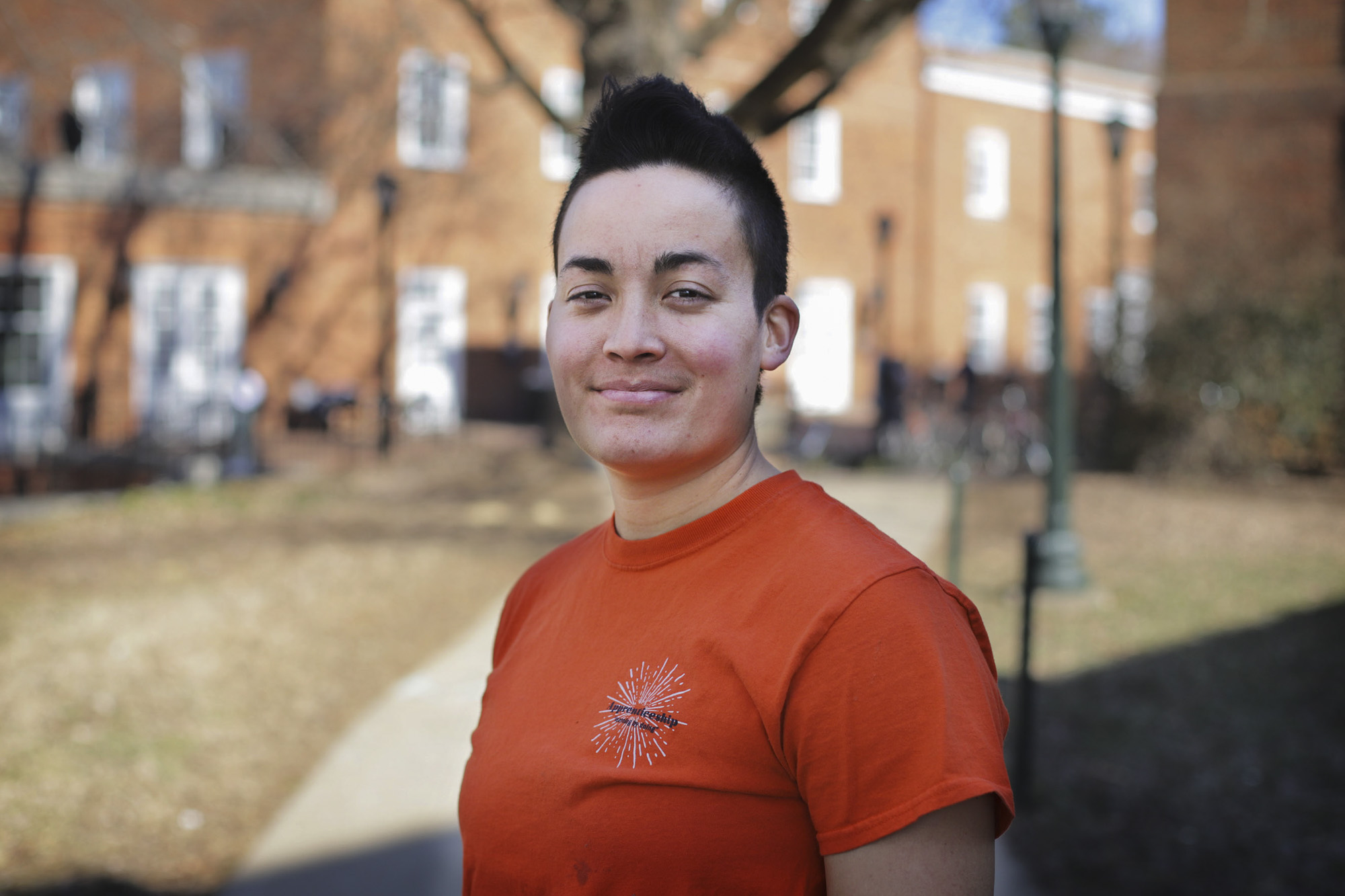 Ryan McCarthy had been a personal trainer and coach in New York City before deciding to become a plumber. (Photo by Jane Centofante, UVA Facilities Management)

The redesign of the program also includes bringing the classroom work, which had been conducted by local technical education centers , in-house.

“We use the National Center for Construction Education and Research curriculum, an internationally accepted instruction for the trades,” Duckworth said. “For each module they complete, there is a proficiency test, an on-screen test and then a hands-on test scored by our instructors. The instructors themselves have to go through training in the NCCER curriculum to be qualified to teach.”

The program offers opportunities for both high school graduates entering the workforce and adult career-changers.

Ryan McCarthy, in her third year as a plumbing apprentice, had been a personal trainer and coach in New York City before deciding to become a plumber.

“There are people who make a lot of money in training, but they hustle and they own gyms and do a lot of things I was not interested in pursuing,” McCarthy said. “I could work with my hands. The trades are physical and engaging, and I knew I could take it as far as I wanted to, so I was lucky when I found the apprentice program at UVA.”

McCarthy discovered the program online, and moved to Virginia to pursue it and be nearer to family. She likes the variety of plumbing work that the infrastructure on UVA’s Grounds offers.

“The rotations can be a mixed bag because, on one hand, every six months or so you are meeting new people, you have to learn a bunch of new buildings, the systems shift a little bit from one place to another, and by the time you really have a handle on it, it is on to the next one,” McCarthy said. “But I like it, in part, because I always feel like I am learning something.”

HVAC apprentice Cody Wayne Taylor of Afton first heard about the apprenticeship program as a student at Nelson County High School. While still a teen, he had been helping a local HVAC technician for years.

“I like the whole switching around and meeting different people in every single new zone,” Taylor said. “I like meeting new people, making new friends and seeing where I want to go after I put in my four years, instead of staying in one place for four years and not knowing all the University.”

HVAC work requires skill with both plumbing and electricity. For Taylor, that presents many opportunities for problem-solving. 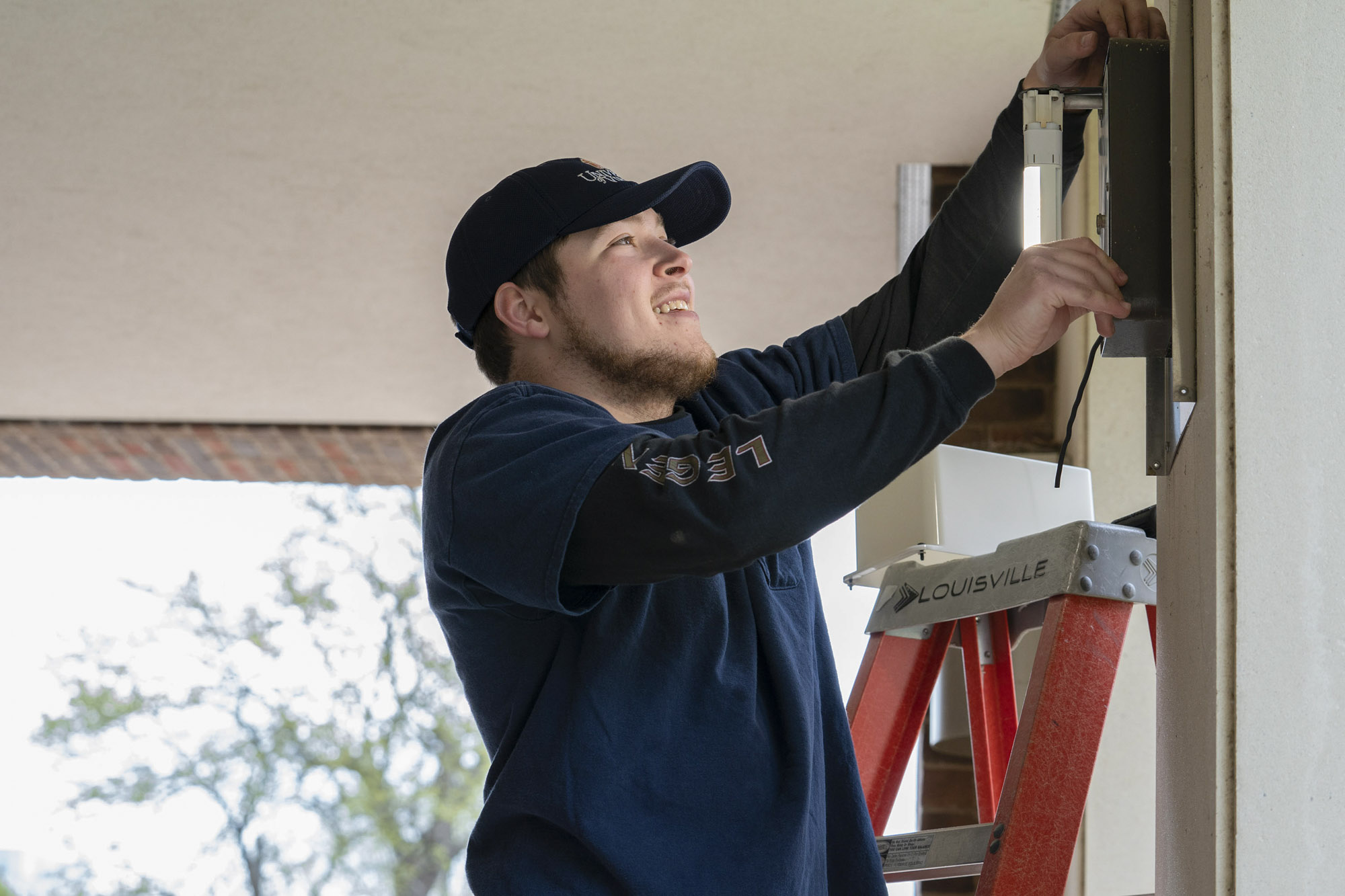 “That there is so much troubleshooting, it’s not just one thing,” he said. “I really love it. I like tinkering with stuff.”

Pedro Gonzalez is another apprentice who enjoys the multitude of skills HVAC work requires. Gonzalez, 47, of Charlottesville, made the transition from a landscaper at the University to an HVAC technician.

“I felt inclined for a mechanical job, even when I didn’t study that in the past,” he said. “I have done a lot of mechanics in the past.”

Gonzalez, a native of Venezuela, said his country’s transition from democracy to socialism made life very difficult for everyone. Gonzalez had been a clerk working for the U.S. government in Venezuela, then became a purchasing agent. As the economy continued to collapse and Gonzalez no longer had an office job, he and his brother became automobile mechanics, a trade they plied until Gonzalez came to the U.S. in 2013.

In the U.S., Gonzalez labored as a warehouse worker and photography studio grip for Plow & Hearth, then started working as a seasonal landscaper for the University in 2017. After several months, he became full-time. One day, he saw an advertisement for the apprenticeship program, and his supervisor encouraged him to apply for it. 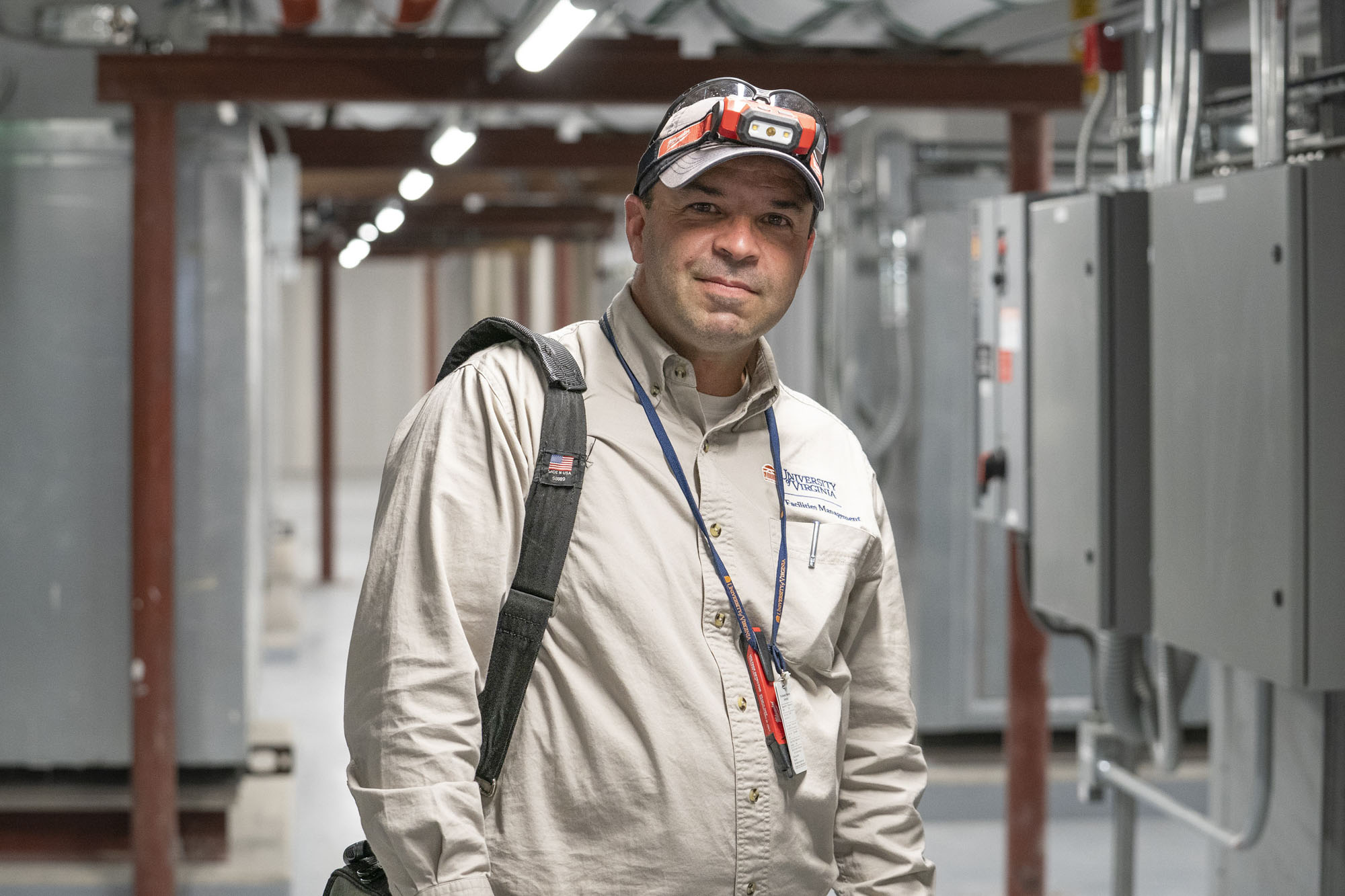 Pedro Gonzalez made the transition from a landscaper to an HVAC apprentice. (Photo by Dan Addison, University Communications)

While Gonzalez had six semesters of business administration in Venezuela, he did not finish college. He sees the apprentice program providing him with a new future.

“I am an old apprentice, but I am very happy about it,” he said. “I think it is a great opportunity that the University gave me to shine at my age. And I am just blessed. And I feel young. I like sports, I eat well and I have a beautiful family – my wife, my two kids.”

Besides providing a welcome opportunity for workers, the program provides a steady, skilled workforce for the University.

“We don’t just want to turn out journey-level folks,” Duckworth said. “What we want to do is create a regenerative pipeline for the University and for the community. We had a lot of our contract partners at the job fair, and we are all hurting for tradespeople right now.”

Approximately 219 apprentices have gone through the program since it started in 1982. Of these, about 80% are either currently employed at or have retired from the University.

Nor is the program limited to just producing workers.

“We integrate professional development because we want to turn out future supervisors and future project managers,” Duckworth said. “We want future leaders in the organization, again creating that regenerative pipeline. As they are working their way up, you get their institutional knowledge and you get the loyalty because we are making an investment in our folks.”

About 30% of the apprentice graduates are working as supervisors or hold lead positions.

McCarthy is not the only one who appreciates the approach. UVA’s program is a model for similar efforts at other universities across the country.