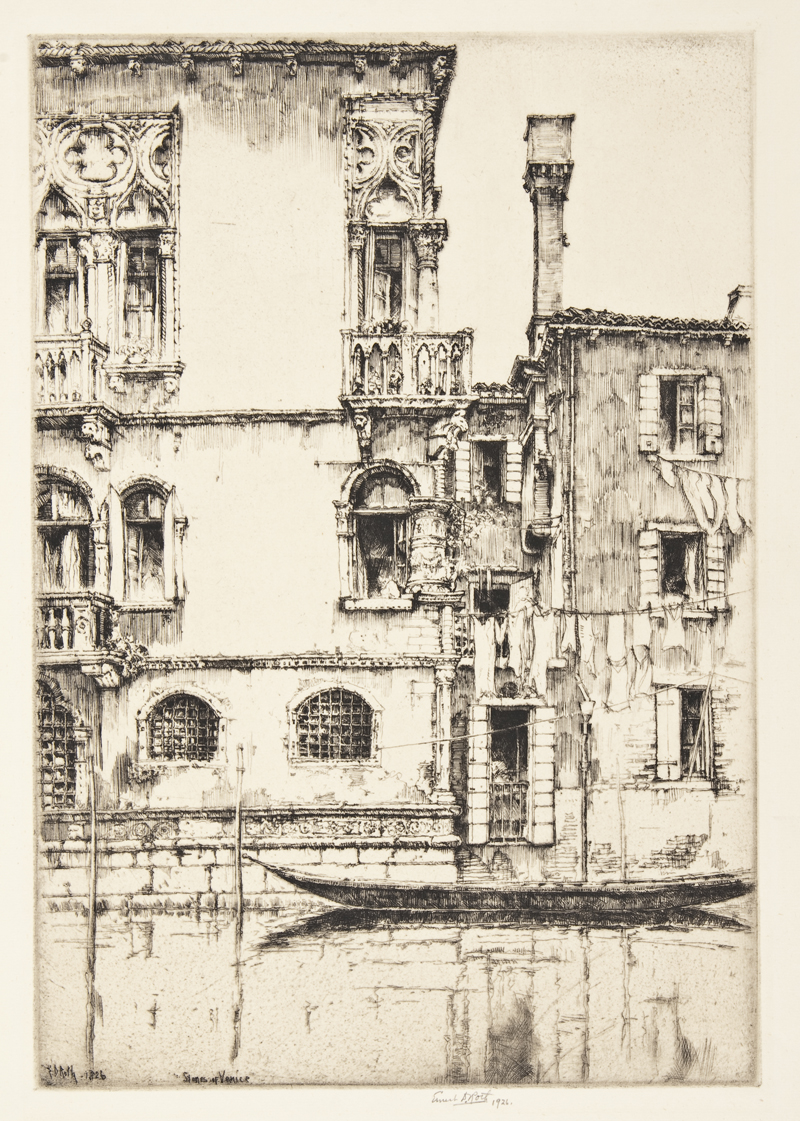 The American artist James McNeill Whistler is best known for his 1871 painting “Arrangement in Grey and Black No. 1,” referred to as “Portrait of the Artist’s Mother,” but his work extends well beyond people. Along with John Ruskin, the leading English art critic of the Victorian era, Whistler also helped redraw the map of Venice, Italy.

Although they were artistic and legal adversaries during their heyday, Ruskin and Whistler were united in their love of Venice. Ruskin championed the Gothic architecture of Venice as emblematic of a once-great republic, while Whistler explored the maritime city through its obscure canals and byways.

“Reflections and Undercurrents: Ernest David Roth and Printmaking in Venice, 1900-1940” shows the influence of Whistler’s art on a generation of artists from the first half of the 20th century. The prints on display demonstrate how Venice inspired artists in the wake of Whistler.

Curated by Bruce Boucher, director of The Fralin Museum of Art at the University of Virginia, the exhibit runs through Aug. 10 in the museum’s Pine Gallery.

Whistler’s extended sojourn in Venice from 1879 to 1880 led to a remarkable series of etchings and pastel sketches that fixed the fading quality of the city, capturing what the writer Henry James once described as “its inexorable decay.”

Through his art, Whistler set a standard for subsequent generations of artists who explored and evoked the city.

“‘Reflections and Undercurrents’ offers fresh impressions of Venice by a generation of American and Italian printmakers who worked under the spell of James McNeill Whistler,” Boucher said. “Together, their etchings allow us to experience Venice before the depredations of the later 20th century."

The exhibition focuses upon the work of Roth (1879-1964), one of the most significant American etchers of his day, and his contemporaries. The art ranges from panoramas of the lagoon and St. Mark’s Square to the Gothic palaces and churches praised by Ruskin in his monumental study, “The Stones of Venice.”

Most of these etchers succumbed to the lure of Whistler’s example by creating their own images of Venice away from the city’s well-traveled paths. Roth; his Venetian friend, Fabio Mauroner; John Taylor Arms; and others not only documented Venice as they saw it, but also created visual “tone poems” of a vanishing civilization.

“Reflections and Undercurrents” was originally organized by the Trout Gallery at Dickinson College in Carlisle, Pennsylvania. A catalogue accompanying the exhibit was written by Eric Denker, who has been the senior lecturer at the National Gallery of Art in Washington since 1978. Denker attended Dickinson and received his doctorate from U.Va., writing about Whistler’s work.

The Fralin Museum of Art’s programming is made possible by the support of The Joseph and Robert Cornell Memorial Foundation. The exhibition was made possible through the support of the Suzanne Foley Endowment Fund, Albemarle Magazine and Ivy Publications LLC’s Charlottesville Welcome Book.