Narrowing the Health Care Gap for Latinos, One Visit at a Time 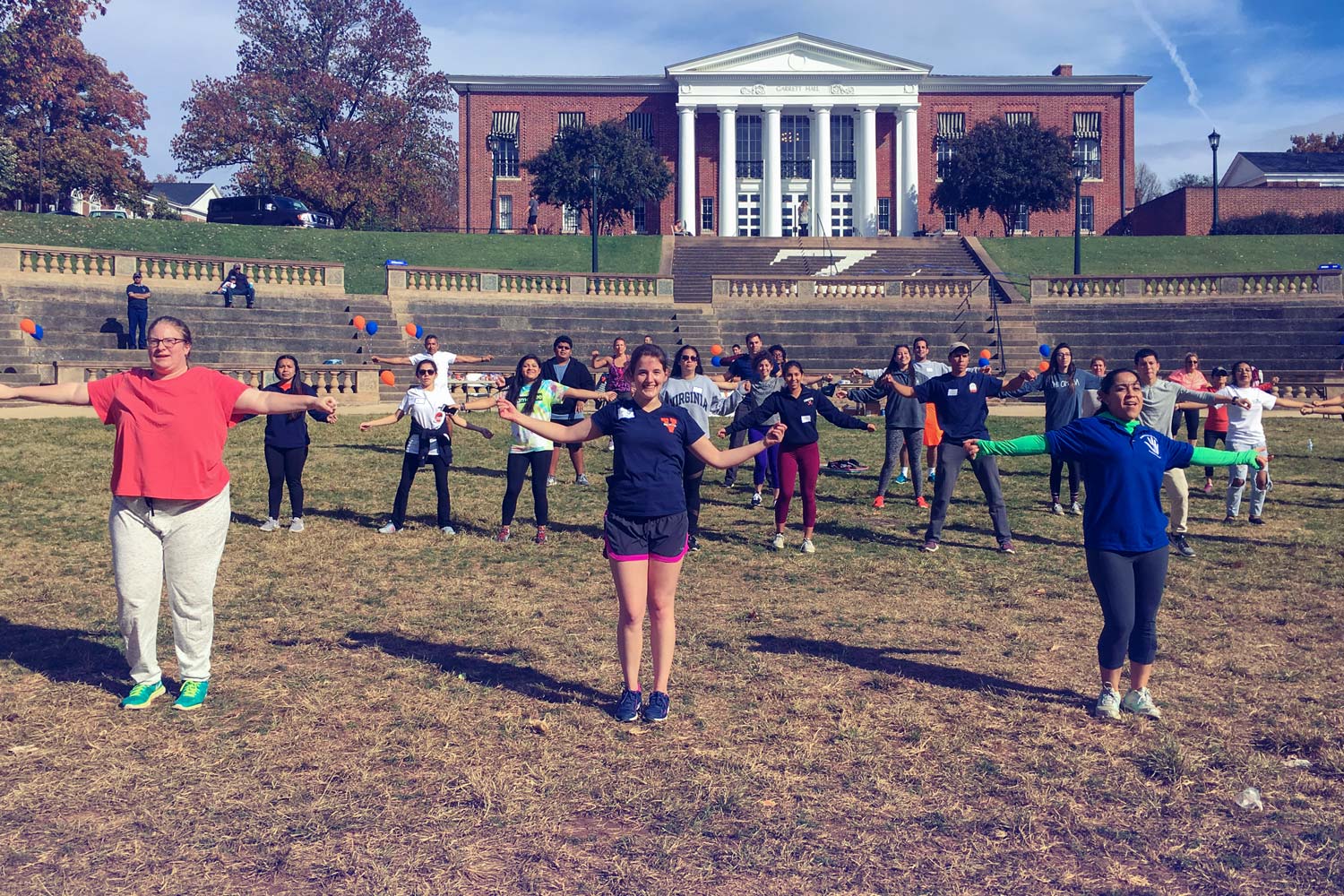 Dr. Max Luna, a native of Guatemala and an associate professor of medicine at the University of Virginia, saw a need – and filled it.

The Charlottesville area’s Latino community was in need of affordable, sustained health care. UVA students, looking to sharpen their health care skills, were yearning to serve. Thus was born the Latino Health Initiative, a program that pairs the two in a mutually beneficial relationship.

The kinship was on display a week before Christmas at the Church of the Incarnation, a Roman Catholic community perched behind Fashion Square Mall. The parish is the spiritual home to thousands in Charlottesville’s Latino community.

As the congregation worshipped at Sunday’s 1:30 p.m. Spanish-language mass, Luna and six medical students were setting up a medical station where they would receive patients, conduct cardiovascular risk screenings and offer counseling on how to prevent heart attacks and diabetes as well as how to access local, affordable health care.

The team visits every other week. The students receive no academic credit. It is all free. 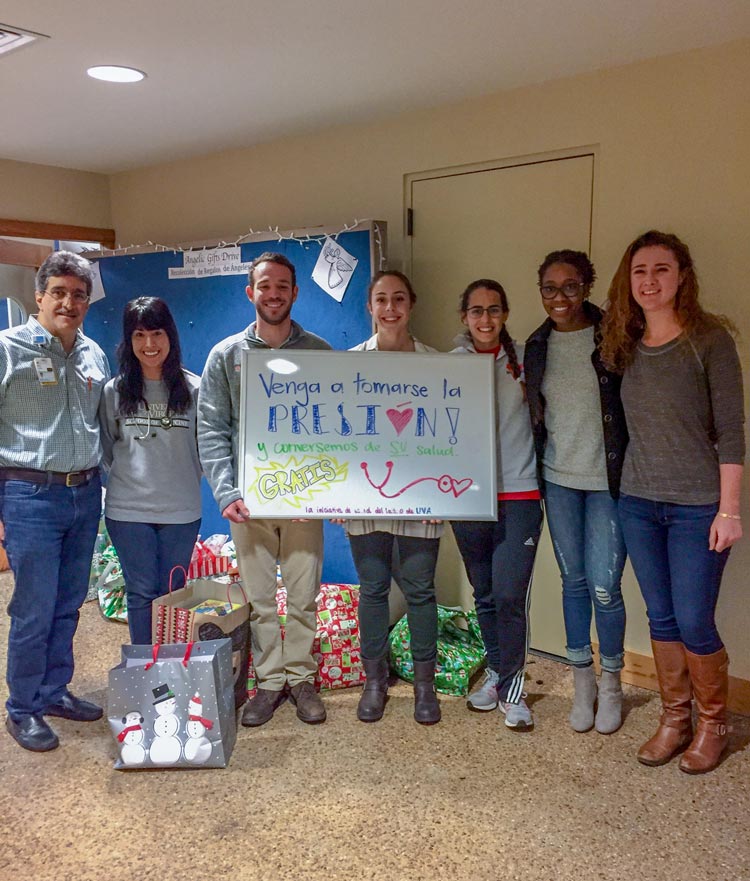 Since beginning in January 2016, the team of volunteers has served more than 300 people during more than 700 appointments with patients at the church. “People now know that we are there on a regular basis; it’s something that we are proud that they can count on us,” Luna said. “I think it builds community and the sense that UVA has their back.”

The Latino Heath Initiative grew from UVA’s Guatemala Initiative, which was formed more than 10 years ago in the School of Medicine to enhance health in the country while providing culturally competent learning opportunities for medical students, residents and faculty.

Luna noticed that the initiative’s student participants were returning to Charlottesville skilled and energized to do more. Connecting with the local Latino community seemed the natural course. The largest minority group in the country and often underserved, their need was deep.

Besides the clinic at the Catholic church, volunteers – who have also included students from the School of Nursing, UVA physicians and undergraduate students – also staff monthly “La Clinica Latina” nights at the Charlottesville Free Clinic. Patients receive culturally competent care in their language.

The initiative also partners with the Thomas Jefferson Health District to provide ongoing advanced training to Latino community health workers, “key members of this community that advocate for the health of their people,” Luna said. More than 50 students, faculty members and volunteers are involved in the effort.

With this work, Luna hopes to “narrow the gap” between UVA and the Latino community, even “as national federal politics have inflamed the environment,” he said.

“What we want to do with the Latino community is try to prevent a further growth of the gap and actually narrow that gap by showing that UVA cares,” he said.

“It was an amazing sight to see everyone at the event Zumba-ing together,” Schutzenhofer said, “united by languages as universal as dancing, exercise and the insatiable appetite for ‘Despacito,’” last summer’s huge top-40 hit by singer Luis Fonsi and rapper Daddy Yankee, two performers from Puerto Rico.

“This event was a small first step toward turning UVA into a home, a place of support and welcoming for the Latino community,” she added. “That message was sent through every ounce of effort that our volunteers put into the event, culminating in UVA’s official inclusion of this celebration of Latino culture and health as a part of the UVA Bicentennial Celebration.

“That gesture and support from the UVA Bicentennial Celebration spoke volumes to our attendees, indicating an appreciation of, and a commitment to, the Latino community in the century that is to come at UVA,” Schutzenhofer said. 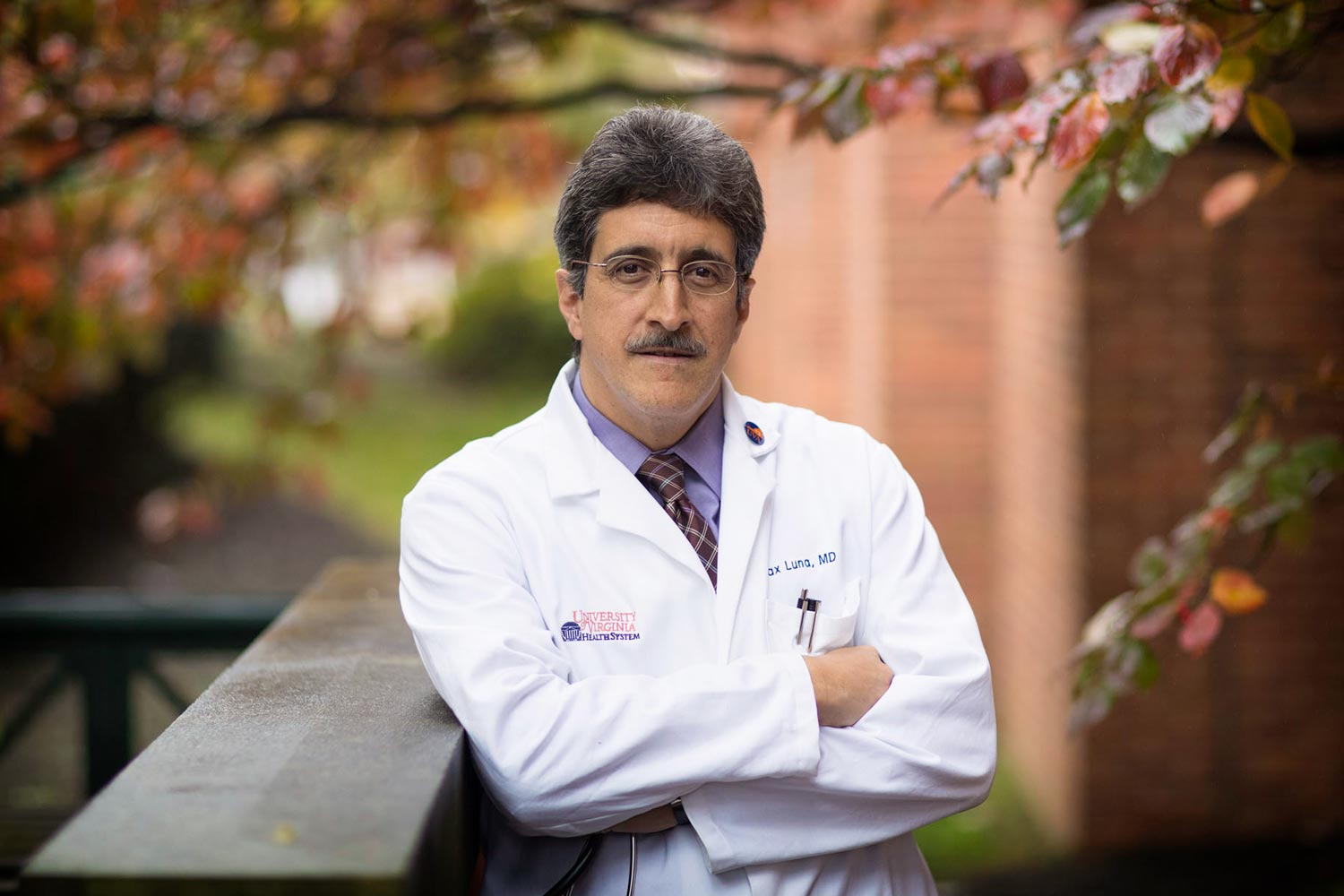 And slowly but surely, the giving has become a two-way-street.

UVA medical student Tessa Klumpp thought back to a November Sunday at the Church of the Incarnation.

“Often the church will have food for parishioners after a special mass,” she said. “A few weeks before Thanksgiving, we were there for our regular program. It was a particularly busy afternoon and a parishioner who often works alongside us as a community health promoter showed up with a plate of food for each volunteer. Church members chose to share with us their limited resources and food that they had prepared themselves. I found this particularly touching.”

Luna was recently featured in the Charlottesville Daily Progress’s annual “Distinguished Dozen,” a series that highlights the good work of local residents in Charlottesville. “Any honor or recognition of our achievements is a product of so much compassion and collaboration among many in town and at UVA,” he said.

Luna said he hopes to hold another Zumba-thon, this time in Southwood Mobile Home Park, which is located off 5th Street Extended and is home to Charlottesville’s largest Latino community, “where we can really bring the people together and take UVA out to the community. This is a message of unity,” he said.

What Is the ‘4th Side’? END_OF_DOCUMENT_TOKEN_TO_BE_REPLACED