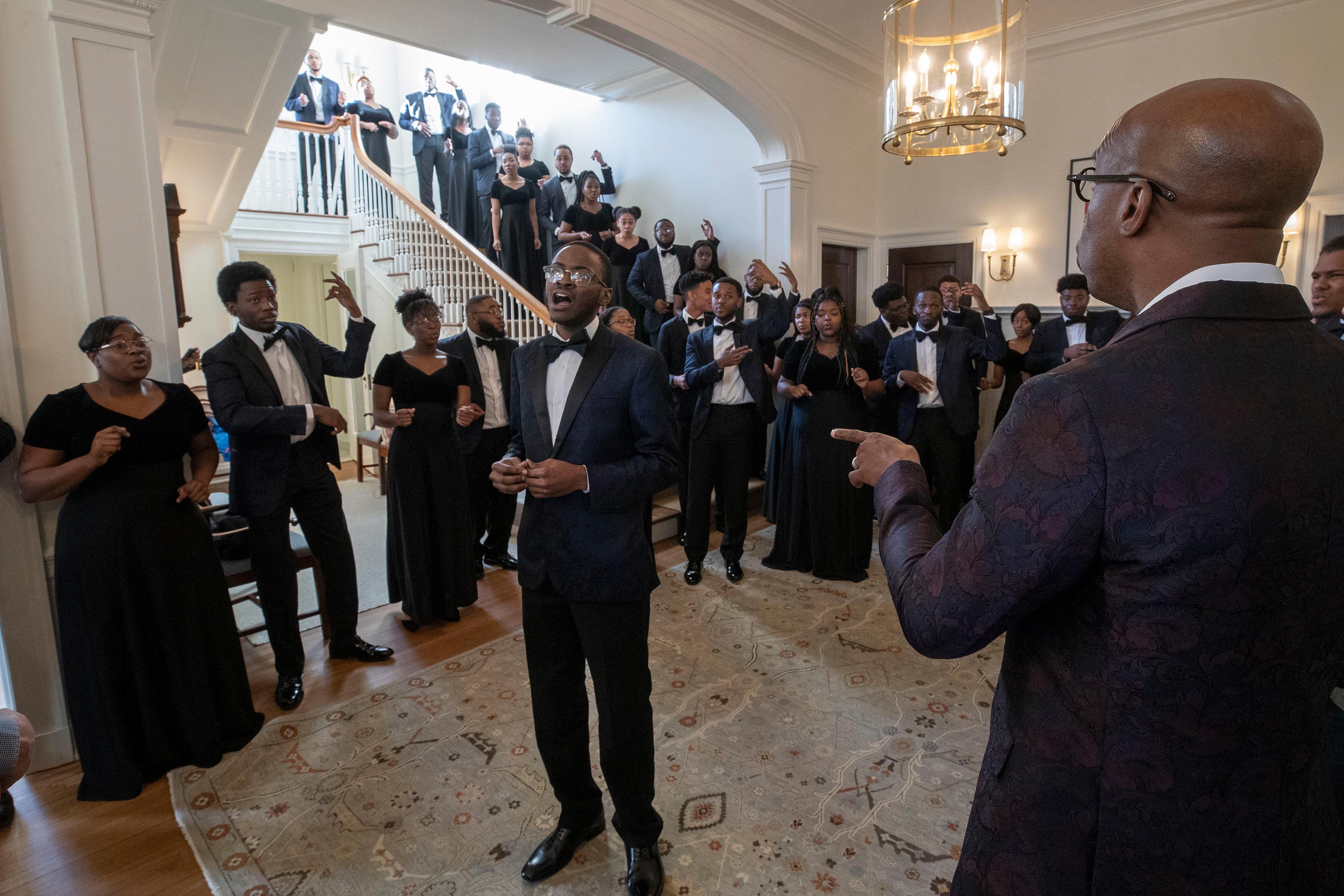 Fragrant winter jasmine and unseasonably warm temperatures welcomed arts enthusiasts to the residence of University of Virginia President Jim Ryan Wednesday afternoon for “Arts on the Hill,” a free, new series of performances for students, faculty and staff.

The brainchild of Ryan, Provost Liz Magill and Vice Provost for the Arts Jody Kielbasa, “Arts on the Hill” will be a regular occurrence during the academic year, with free tickets available through a lottery.

Ryan gave an enthusiastic welcome to the crowd gathered in Carr’s Hill, which has housed every University president since it’s completion in 1909. Carr’s Hill was recently reopened after a renovation and restoration project intended to preserve the historic home for generations.

“Welcome to the first edition of “Arts on the Hill,” Ryan told the crowd. “It’s a very simple concept. About once a month we are going to invite artists, either from among our faculty or students or visiting artists to perform at Carr’s Hill. This is a way to showcase the amazing talent we have here on Grounds among our faculty and students and also to take advantage of the fact that Charlottesville is a real crossroads for incredible artists coming through.” 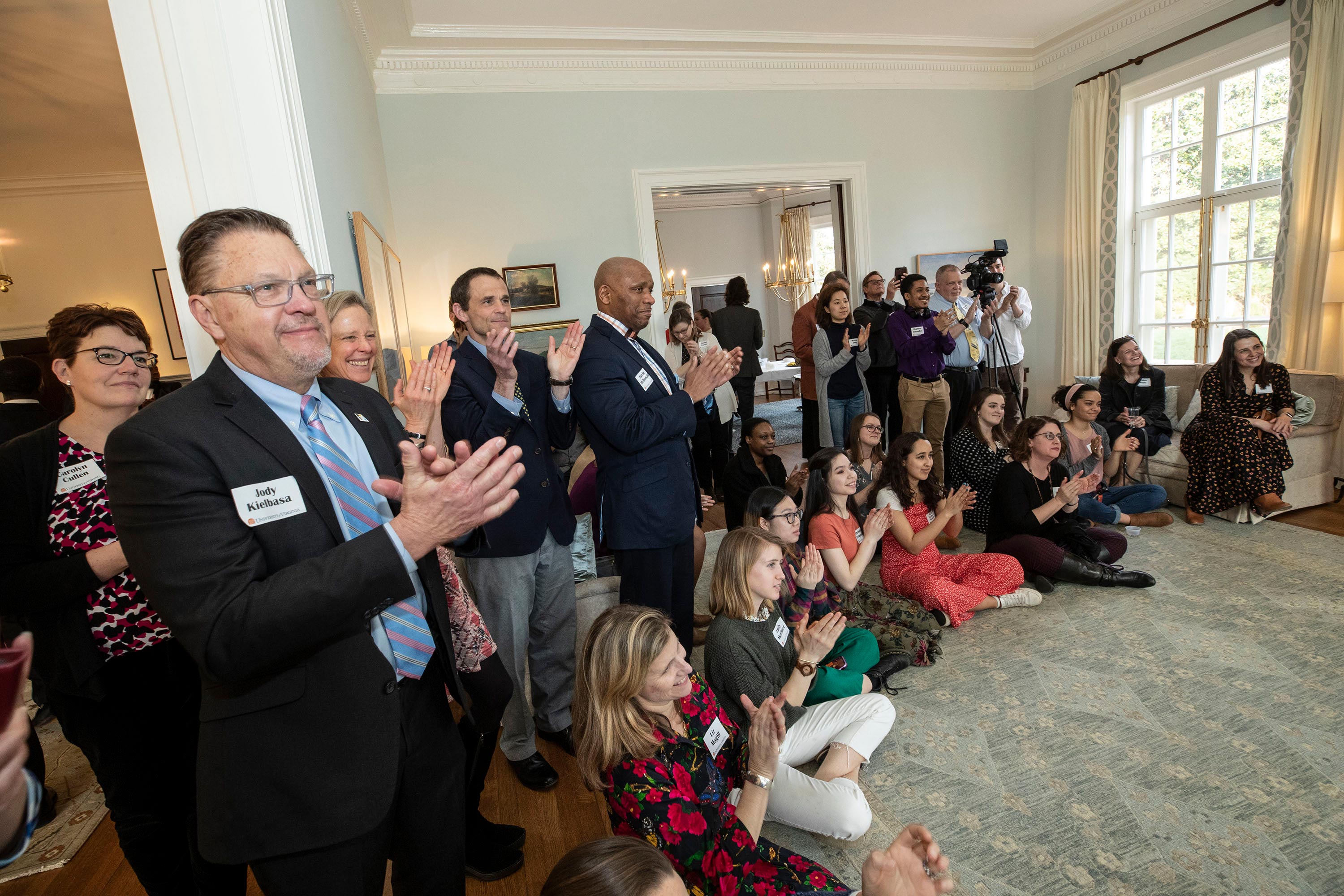 Ryan gave special thanks to Kielbasa, who, he said, is “really the beating heart of the arts at UVA.”

Before introducing the performers, Kielbasa stepped to the head of the room and thanked both Ryan and Magill for believing “that it would be great to open Carr’s Hill to this monthly celebration of the arts.”

He then introduced the afternoon’s performers: a poet, a musician and an award-winning choir.

Fourth-year student Aline Dolinh, a second-generation Vietnamese American and English and medieval studies double major, read her original poem, “This Poem is Not a Knife,” as the audience stood listening in the living room.

Dolinh’s recitation was followed by a solo performance by I-Jen Fang, an associate professor in the McIntire Department of Music. She played three pieces on the marimba, a percussion instrument that when struck, creates dulcet, soothing tones. Fang, who has been called an “intrepid percussionist” by Fanfare Magazine, performed three pieces: “Wind in the Bamboo Grove” by Japanese composer Keiko Abe, “Ingênuo,” by Brazilian composer Alfredo da Rocha Viana and “Divagando,” a piece written by Brazilian guitarist Domingo Semenzato. 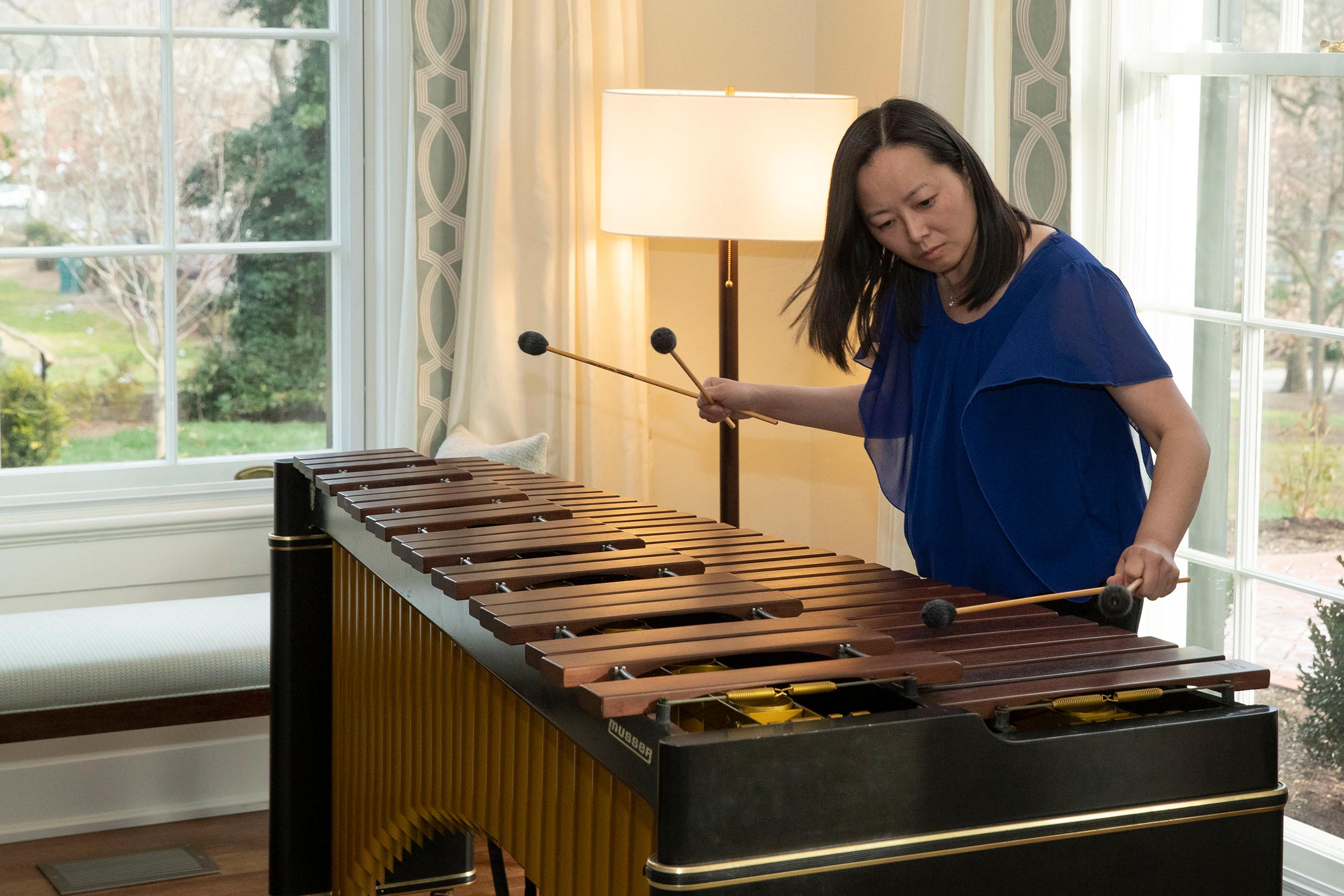 There was then a brief transition period, as the afternoon’s final performers, The Aeolians choir of Oakwood University in Huntsville, Alabama, assembled on the staircase and throughout the first floor and the audience moved to the main foyer, where high ceilings provided the perfect acoustic environment.

Afterward there was a brief question-and-answer session. Magill asked choir conductor Jason Max Ferdinand about the audition process for the choir, which placed first at the 2018 World Choir Games in South Africa.

“The audition lasts for about ten minutes. They come up with any piece, then we check range and voice color,” Ferdinand said. “The third part is the sight reading part, which sort of creates a separation” among those auditioning.

In closing out the first “Arts on the Hill” event, Ryan thanked all of the performers and, tongue-in-cheek, told The Aeolians, “we have a number of terrific graduate programs,” to chuckles. In seriousness, he then said, “We just moved into this house and your presence has graced this house. Thank you very much for being here.”

Organizers say there will be between six-to-eight performances during the academic year, all hosted by Ryan. They will announce the next “Arts on the Hill” soon, along with ticket lottery information.

It’s Copperhead Season in Virginia. Here Is What You Need to Know END_OF_DOCUMENT_TOKEN_TO_BE_REPLACED

What’s Next for UVA’s Class of 2022? END_OF_DOCUMENT_TOKEN_TO_BE_REPLACED