New Books for the New Year, Written by UVA Faculty, Staff and Alumni 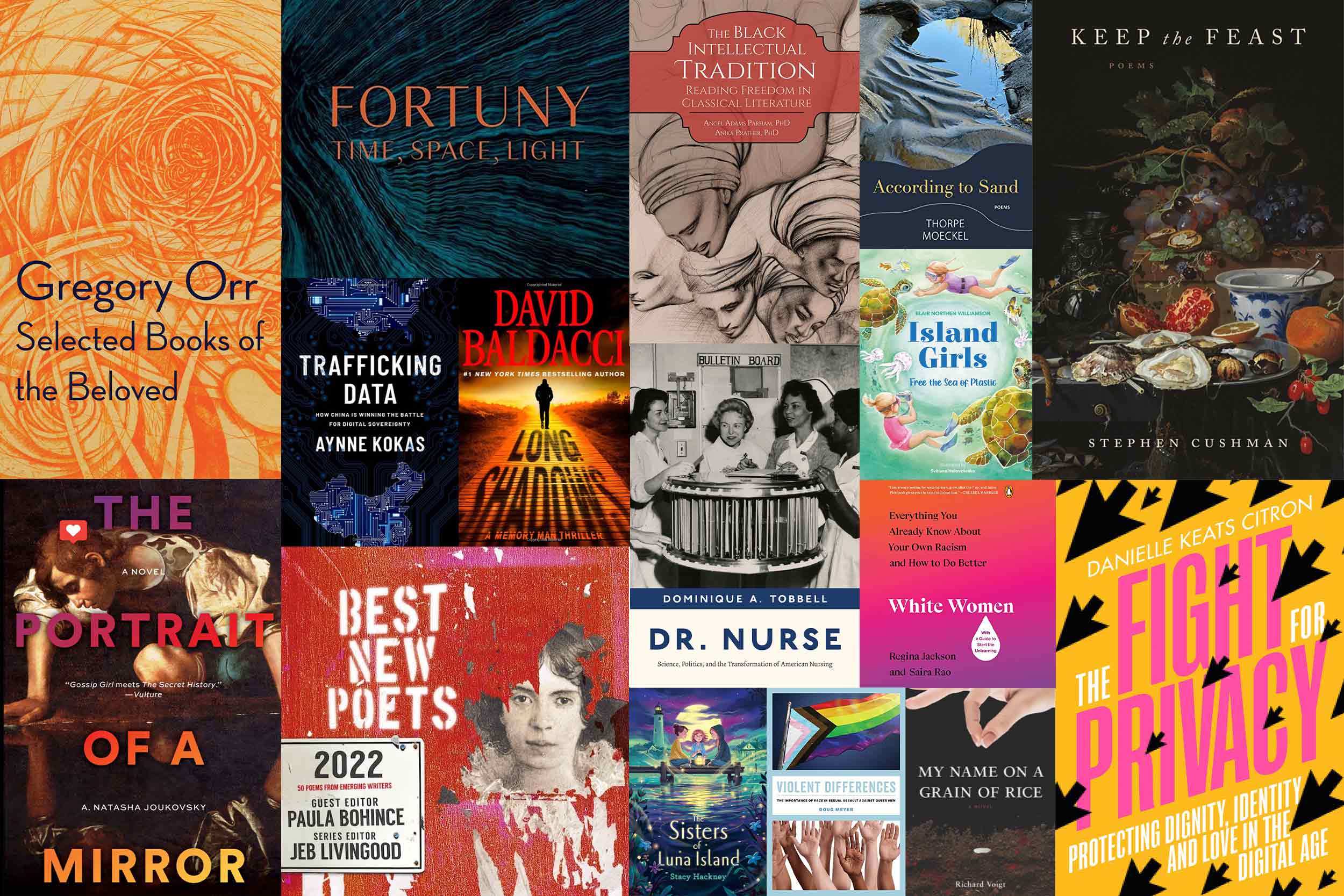 From David Baldacci’s latest thriller to the history of nurses, University of Virginia faculty and alumni published a range of books last semester. Here’s a selection of what they’ve written or edited that might appeal to a range of readers, with information from publishers and reviewers. 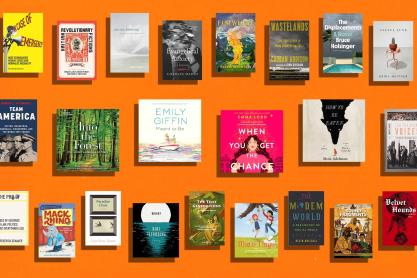 Baldacci, one of the most successful thriller authors of the past 30 years, recently published the seventh novel in his series about Amos Decker, a former football player who eventually becomes an FBI consultant.

Other titles in the series include “Memory Man,” “The Last Mile,” “The Fix,” “The Fallen,” “Redemption” and “Walk the Wire.”

With the Bible as a guide, Cushman’s poems explore the commitments of faith and finding a way of living with the paradoxes of 21st-century life.

Hackney, who grew up in Virginia, said in a recent interview in Virginia Living magazine that she wanted to write about siblings, being close to her own sister. Also the author of “Forever Glimmer Creek,” she earned a bachelor’s degree in English literature from Wake Forest University.

A young-adult novel, “The Sisters of Luna Island” tells the story of sisters Marigold, Birdie and Lou, and their magical legacy.

• A. Natasha Joukovsky, Department of English alumna, “The Portrait of a Mirror”

Joukovsky, who also has an MBA, works for the information technology company, Accenture, and turned to writing fiction in recent years. “The Portrait of a Mirror,” her debut novel, reinterprets the myth of Narcissus in modern characters’ self-obsessions.

“Best New Poets” is an annual anthology of 50 poems from emerging writers, produced in cooperation with Meridian, the Creative Writing Program’s annual literary magazine. The anthology began in 2005 under Livingood, the series editor. University of Virginia Press distributes the book nationally.

• Thorpe Moeckel, 2002 alumnus of the poetry writing program, “According to Sand: Poems”

The fifth book of poetry that Moeckel, who teaches creative writing at Hollins University, has published pays homage to the natural world. The publisher described the poems as “ranging from creekbanks to hummocks, from barrier islands to ridges and hollers (from the Kansas River to West Penobscot Bay, to the Edisto, to various tributaries of the New and the James, the Neuse and the Savannah).”

Orr, who co-founded the Creative Writing Program and taught at UVA for 44 years, published a dozen books of poetry, plus a memoir and a couple of other nonfiction books on poets and poetry writing. Publishers Weekly calls his latest collection “a love letter to poetry.”

• Richard Voigt, School of Law alumnus, “My Name on a Grain of Rice”

Voigt’s coming-of-age novel tells the story of a young man who quits his respectable job to journey with a friend and seek experience and self-discovery. “The title is a metaphor for living small (writing in tiny letters on rice is an art) vs. having your name in neon lights,” as a review on BookTrib explained it.

• Blair Northen Williamson, 2008 alumna of the Department of Sociology, “Island Girls: Free the Sea of Plastic”

Williamson, a Richmond native, spent years seeing plastics in the ocean when she worked for Global Expeditions Group and as a sailing captain and scuba-diving instructor in the British Virgin Islands and Southeast Asia.

Her debut children’s picture book tells the tale of two young sisters inspired to clean up the ocean and protect their aquatic friends.

• Danielle Citron, Jefferson Scholars Foundation Schenck Distinguished Professor in Law and Caddell and Chapman Professor of Law, “The Fight for Privacy: Protecting Dignity, Identity and Love in the Digital Age”

When the MacArthur Foundation gave Citron a $625,000 “genius grant” in 2019, she took a sabbatical and wrote a book that explores how the rise of mass data collection exploits the most intimate details of people’s private lives.

Her book surveys the damage done to privacy rights around the world, makes the case for understanding intimate privacy as a civil and human right, and offers a roadmap for law, industry and individuals to protect those rights.

• Aynne Kokas, C.K. Yen Professor at the Miller Center and associate professor of media studies, “Trafficking Data: How China is Winning the Battle for Digital Sovereignty”

On her website, the book description says, “From TikTok and Fortnite to Grindr and Facebook, Aynne Kokas delivers an urgent look into the technology firms that gather our data, and how the Chinese government is capitalizing on this data flow for political gain.”

• Doug Meyer, assistant professor in the Department of Women, Gender & Sexuality, “Violent Differences: The Importance of Race in Sexual Assault Against Queer Men”

Instead of analyzing sexual assault against queer men in the abstract, this book draws attention to survivors’ experiences, according to the publisher’s description. Meyer examines interview data from 60 queer men who have suffered sexual assault, focusing attention on Black men in particular and highlighting their interactions with the police.

From her preface: “Since the Elizabeth Zintl Leadership Award was first bestowed in 1998, the Women’s Center has been the proud steward of this tradition. As we mark the 25th year of the award, we have offered each of the winners the opportunity to participate in an oral history, reflecting on her legacy of leadership at UVA. The collective story that follows is a narrative of women who have lived out a commitment ‘to serve, to leave wherever you were privileged to work better than you found it.’”

The book is free, from Carol Gilbert at the Women’s Center or from the UVA Bookstore.

Parham’s scholarship covers a range of topics, from teaching Black intellectual thought and the classics to the comparative history of race and ethnicity in New Orleans.

In a recent commentary published in the Wall Street Journal, Parham wrote on the subject of this new book, intended for a general audience, in defense of teaching the classics: “Excellence and diversity, however, can coexist with an education in the classics. The classics should be elevated and broadened, diversified through context and accumulated knowledge. And they have much to teach us, with a proven record of lifting the performance of students, especially the disadvantaged.”

• Saira Rao, 1996 Department of History alumna, and Regina Jackson, “White Women: Everything You Already Know About Your Own Racism and How To Do Better”

Rao, a political activist and a former Wall Street lawyer and television producer, met Jackson several years ago and the two joined forces on a mission to dismantle oppression. The authors started a program, Race2Dinner, to encourage one small group of women at a time to talk about white supremacy, racism and xenophobia, and made the documentary film, “Deconstructing Karen,” about these dinners.

Then they published this complementary book that immediately became a New York Times bestseller, described as “a no-holds-barred guidebook aimed at white women who want to stop being nice and start dismantling white supremacy.”

The book gives a 20th-century history of nursing, examining American nurses’ more expansive roles in the post-World War II era and efforts to boost nursing as an academic discipline.