A New Gold Standard: UVA Orthopedics Facility Aims to Be ‘Best in the Country’ 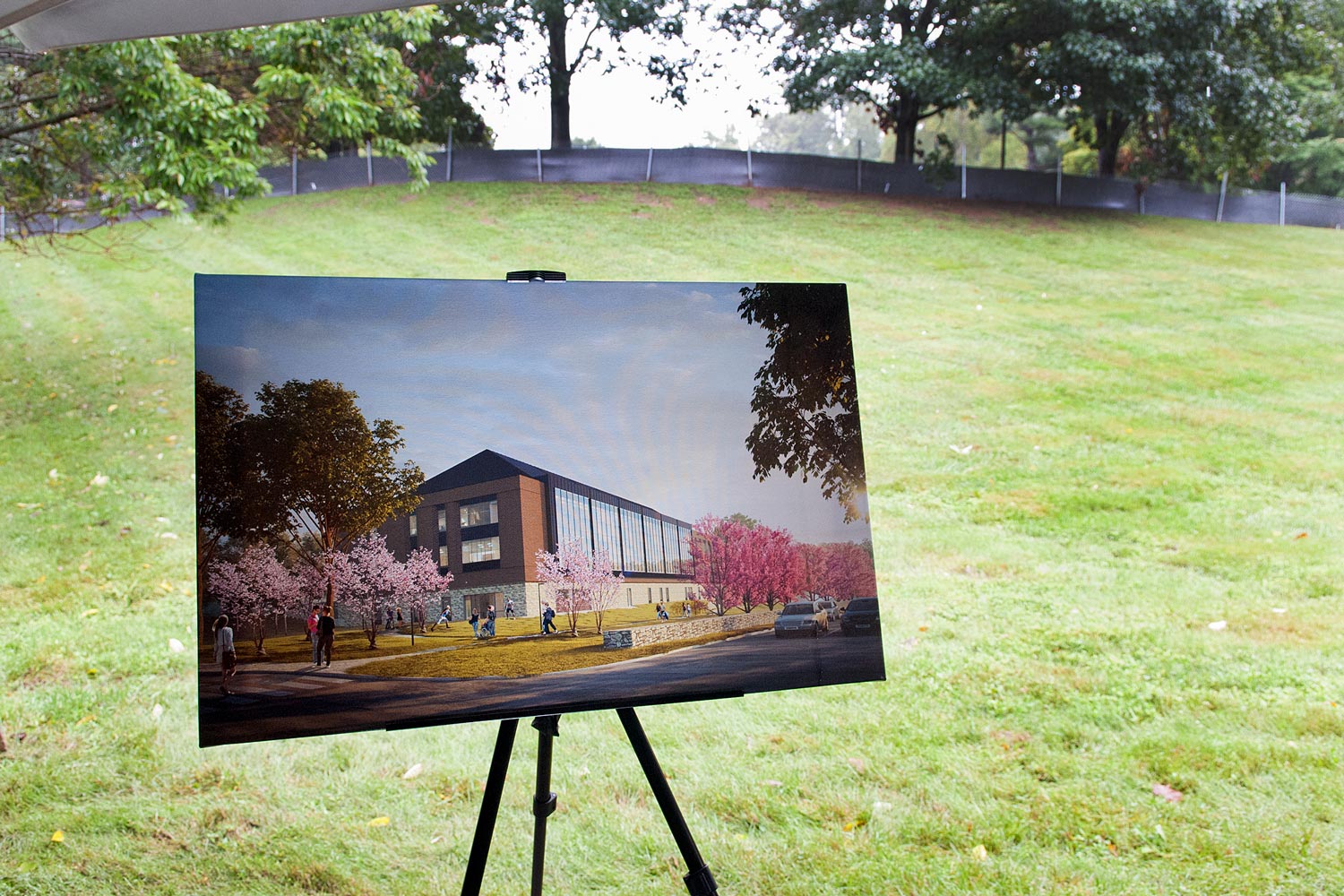 When the University of Virginia opened John Paul Jones Arena with a men’s basketball game in 2006, legendary boxing announcer Michael Buffer (of “Let’s get ready to rumble!” fame) announced the starting lineup as fireworks exploded and the CavMan mascot dramatically rappelled from the roof.

’Hoos in attendance beamed with pride over the new state-of-the-art building, which quickly was anointed by the college hoops world as one of the best facilities in the country.

Earlier this month, a beaming Chhabra – along with Dr. Rick Shannon, UVA’s executive vice president for health affairs – wielded a shovel in a groundbreaking ceremony for the $160 million project on Ivy Road near the U.S. 29/U.S. 250 interchange.

“This facility,” Chhabra, chair of UVA’s Department of Orthopedic Surgery, declared, “will be the best for musculoskeletal and orthopedic care in the country.” 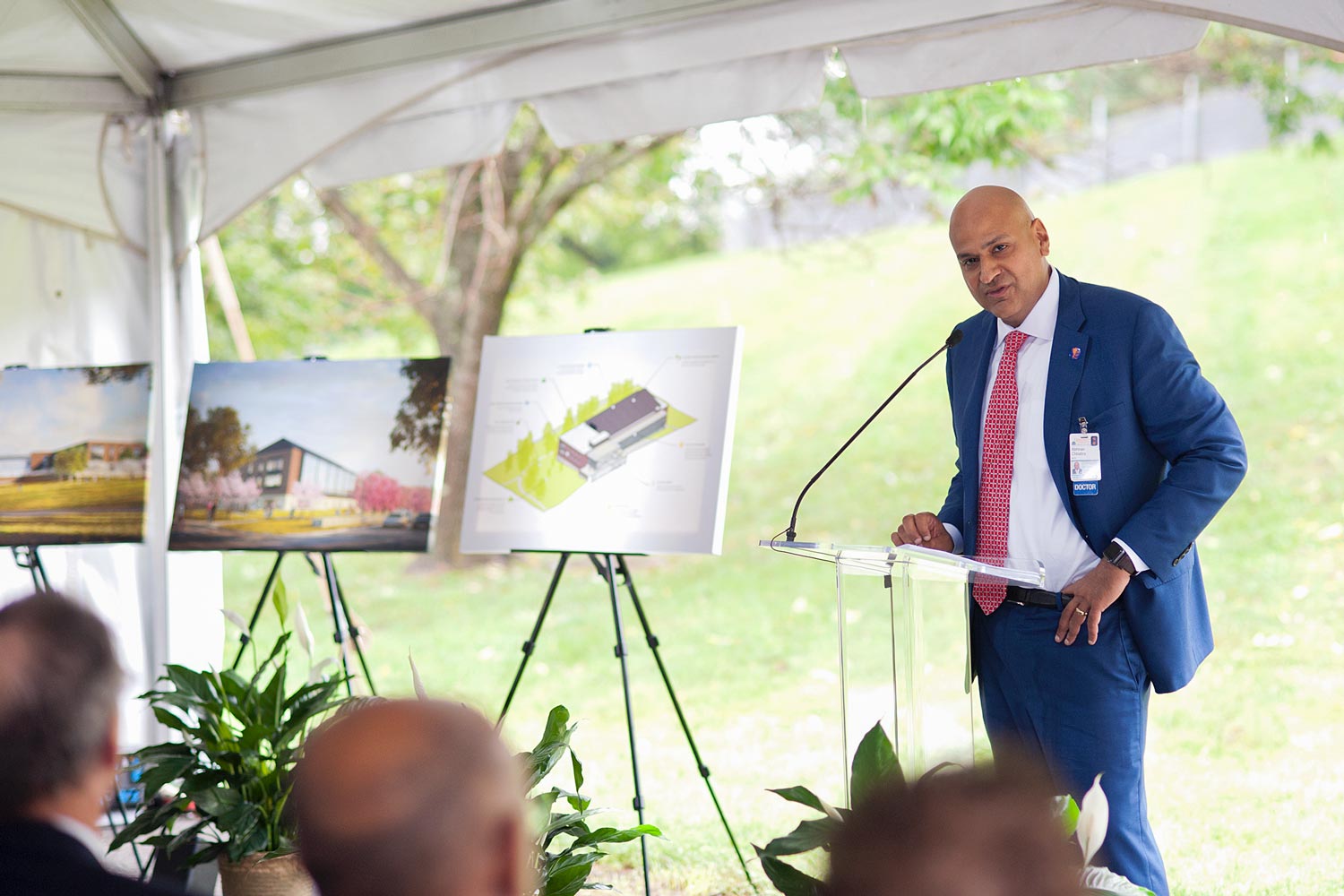 The project has been a true labor of love for Dr. Bobby Chhabra, a “triple-’Hoo.” (Photo by Kay Taylor, UVA Health System)

Scheduled to open in February 2022, Ivy Mountain will be one of only four similar facilities of its kind on the East Coast, joining the Hospital for Special Surgery in New York City, the Emory University Orthopaedics & Spine Hospital in Georgia and the University of Florida Orthopaedic and Sports Medicine Institute in Florida.

With 90 exam rooms, six operating rooms, surgery support and imaging services, a retail pharmacy and food service, the massive 195,000-square-foot facility will be the ultimate one-stop shop for orthopedic and musculoskeletal care.

The center will unite all of UVA Orthopedics outpatient clinics, meaning patients who have sustained multiple injuries will no longer have to schlep around Charlottesville to various specialists – a foot and ankle clinic here, a hand clinic there – for their treatment.

Chhabra said other benefits will be better communication between the physicians and providers, as well as improved synergy for patient care and clinical orthopedic research.

“No matter how many musculoskeletal problems you have, you will be able to get all of your care in one location,” Chhabra said. “There will now be seamless care through the whole spectrum – from diagnosis, treatment to therapy.

“We’ll be able to provide the most innovative care and treatment technologies for our patients at a more competitive price.”

Shannon has called musculoskeletal and joint problems “the disease of the next century.” With many Baby Boomers needing joint replacement, Chhabra said the prediction is already proving true. “If you look at the trends, hip and knee replacement will be one of the most common surgeries in the world within the next decade,” he said.

And with a dedicated post-operative joint replacement unit where patients can receive therapy right in their rooms while family members are present, Chhabra said they’ll now have the perfect place to do it.

The project has been a true labor of love for Chhabra, a “triple-’Hoo” who learned under the legendary Dr. Frank McCue (the former doctor for UVA’s sports teams). He and his partners at UVA Orthopedics first dreamed up the idea 10 years ago and Chhabra has spent the last two years navigating the project through the design and approval phase.

UVA men’s basketball coach Tony Bennett, whose players have relied on Chhabra and his team for years, said Chhabra’s determination to see the project through has been inspiring.

“It’s been such a vision for him, and really, the whole orthopedic department, to have a world-class facility,” Bennett said. “To see it starting to come to fruition is really special.”

“It’s taken a village,” he said. “We’ve had input from hundreds of people during the planning process, with the sole focus being, ‘How do we provide the best care for our patients and at the same time educate the next generation of physicians and providers?’” 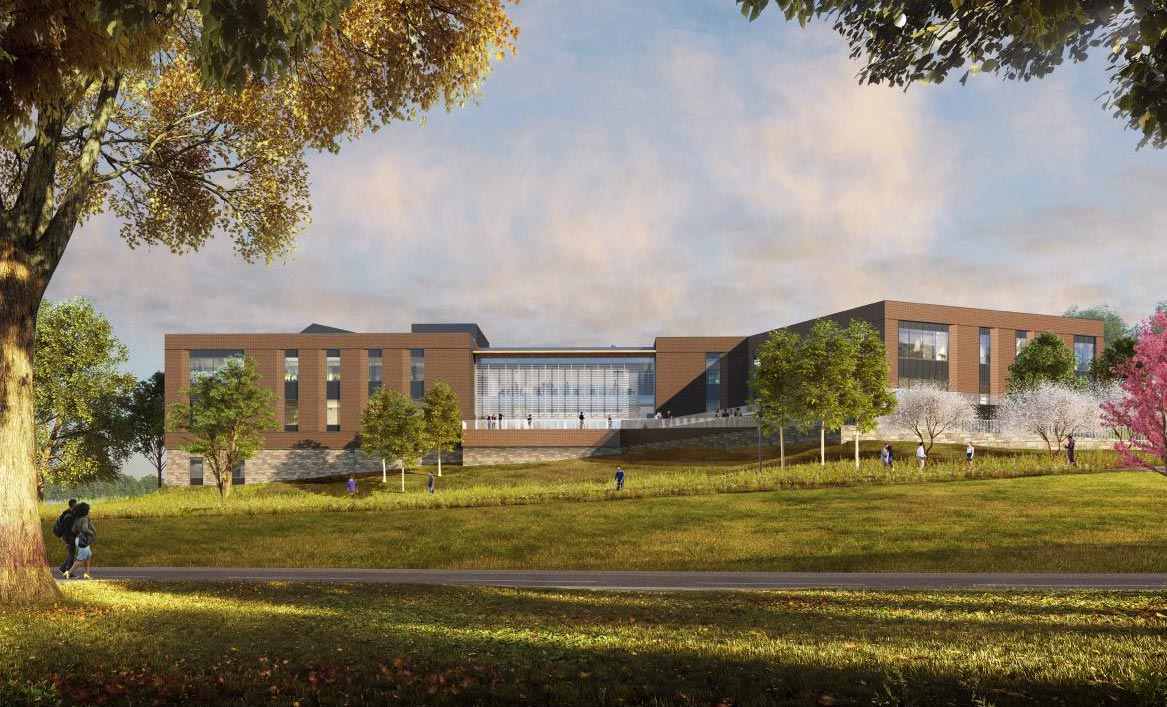 Located less than a mile from UVA’s sports complex, the facility will be of obvious benefit to Cavalier sports teams.

“The new medical center will provide our student-athletes, and the community, an entirely new level of health care and convenience,” UVA Director of Athletics Carla Williams said. “It is a great model of care where so many resources that had previously been spread out around Grounds will be in one central site. The concept and design enhances multidisciplinary care and will greatly benefit patients and their wellness needs.”

UVA’s head athletic trainer, Ethan Saliba, who has cared for Wahoo athletes for 36 years, said Ivy Mountain will be the new “gold standard.”

“It will provide resources for the total care of athletes – from the professional to collegiate or high school level – along with those who are just interested in being physically active,” Saliba said. “We are very fortunate to have this.”

Chhabra believes Ivy Mountain will give the University a leg up in recruiting the best students and student-athletes.

“There’s nothing more important for a parent to know that their kid is getting the best health care possible, and this facility will not only be incredibly beautiful, incredibly advanced and innovative, but it will provide the parents of all our students real comfort in knowing their kids are getting the highest level of orthopedic and musculoskeletal care in the country,” he said.

For some UVA athletes, the one-stop nature of Ivy Mountain may feel similar to their current experience at JPJ, where they can practice, study and eat all in the same place.

“The state-of-the-art facilities all under one roof will just be incredible,” Bennett said.  “When you combine that with what I believe are some of the best doctors and technicians – that’s when you start talking about world-class. I think that’s what we have here.”

At UVA, There Is a Club for Everyone END_OF_DOCUMENT_TOKEN_TO_BE_REPLACED