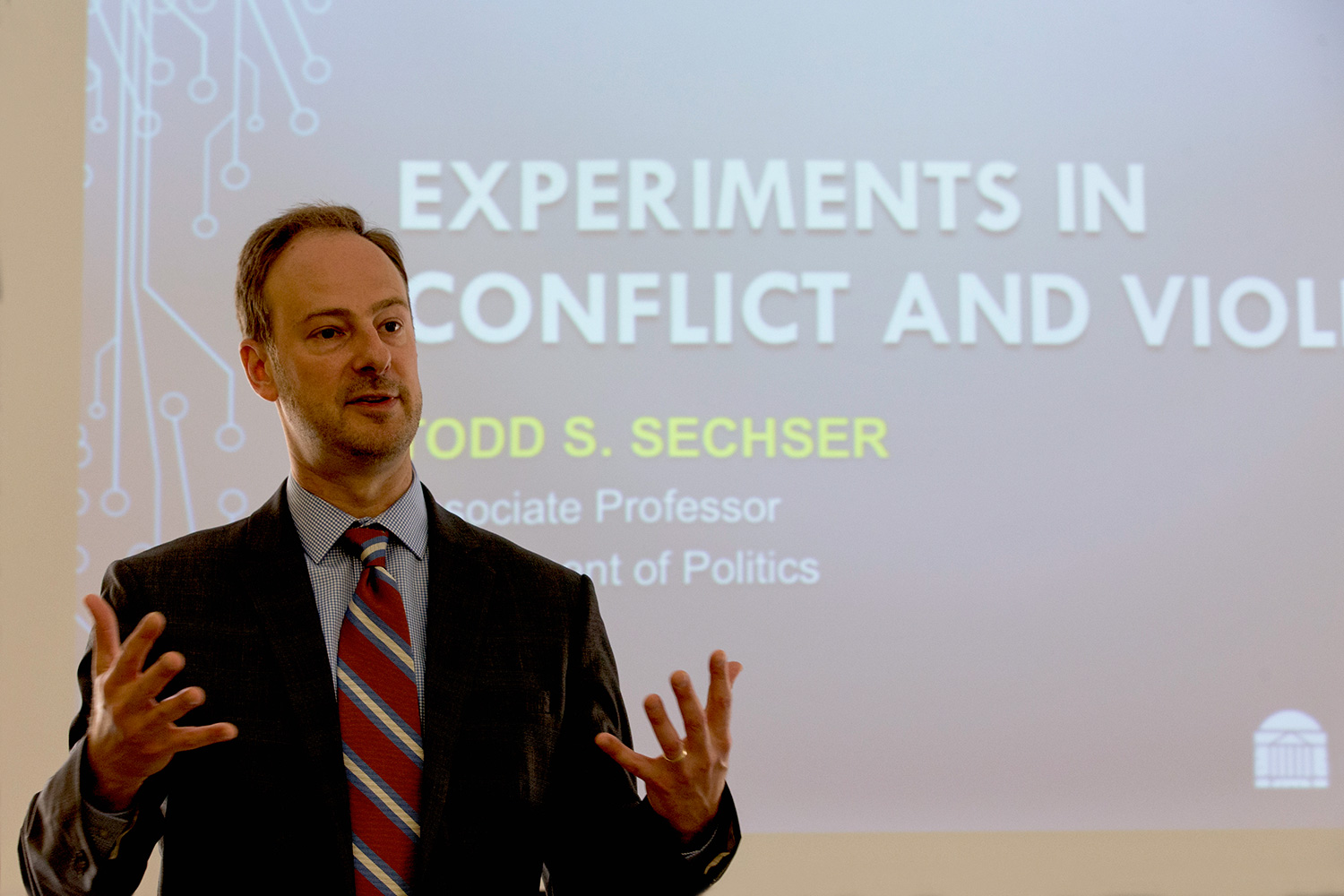 Participants in the Department of Politics Experimental Lab provide researchers with valuable data about whether or not exposure to violence affects aggression. (Photo by Dan Addison)

In room 296 of Gibson Hall, a group of University of Virginia undergraduate volunteers sit at individual terminals, intently looking at the computer screens in front of them.

These students aren’t writing a paper or taking an exam. Instead, they are part of an experiment in UVA’s new Department of Politics Experimental Lab.

The lab, which has been in the works for the past two years, but was officially launched in the spring semester, aims to identify and understand the coercive effects of violence in civil wars and insurgencies and how civilians react to violence in their communities.

Associate Professor Todd Sechser, the principal investigator of the experimental lab project, said that experimental research is the gold standard of the social sciences, but its use within political science has been on the rise as of late.

“Within political science, people have been doing experiments on the margins for decades, but only in the last several years have experiments become a mainstream method of research,” he said.

Thanks to funding from the Air Force Office of Scientific Research, the UVA Quantitative Collaborative and the College of Arts & Sciences, UVA is now able to conduct such research on its own turf.

The lab comprises a team of 35 UVA graduate and undergraduate students who develop and implement various experiments while working in tandem with the Political Violence FieldLab at Yale University, which tests out the experiments and theories in the field.

“Combining our expertise allows us to answer some really interesting questions about coercion and asymmetric conflicts,” Sechser said. “We divided up the project this way because they have experience in the field and we have a tremendous capacity at UVA to put together this lab. The goal is to bring the two together and find results that match and survive across the two elements of the project.”

Since February, the experimental lab has seen 100 hours of work and seven experiments through to completion.

One such experiment focused on well-known conclusions from psychology that correlate exposure to violence with increased aggression.

Following the films, participants were assigned a word completion task and a competitive reaction time task. The completion task confirmed the findings of psychologists – individuals who were in the treatment group were more likely to choose violent words, thus displaying an increase in aggressive cognition. The competitive reaction time task, however, had a different result.

Participants were led to believe this task was a competition amongst themselves, and the winner would choose the intensity and duration of a loud blast that would sound through his or her opponent’s headphones. What the Experimental Lab researchers found was that those who were in the treatment group were more apt to choose shorter blast durations and lower blast intensities – showing more empathy toward their opponents.

“This was our most striking finding as this goes very much against what psychologists are finding when they expose children and adults to violent media,” Abigail Post, the lab and project manager, said. “Exposure to real-life violence seems to increase aggressive cognition, but decrease aggressive behavior and increase a willingness to trust others and cooperate.”

Sechser believes that sharing such findings through open lines of communication across disciplines could advance the mission of the research.

“We’ve read tons of psychology, sociology and economics literature, and it turns out people within each of these disciplines know a lot about the topic, but they aren’t talking to each other,” he said. “So one of the purposes of this project is to merge those findings.”

While the findings of the experiment are a result of a controlled environment, Sechser explained they are, indeed, applicable, and very valuable, to understanding real-world issues.

“In the end, we aren’t interested in how undergrads behave in a lab, but how people behave in real settings where violence is actually taking place,” Sechser said. “Our results, though, can be extended to understand what we should expect in post-conflict societies. These things make a difference in governance, political stability, economic prosperity and recovery.”

It’s Sechser’s hope that the work done so far in the experimental lab is just scratching the surface of the research to come and that future work will be interdisciplinary and collaborative.

“The ultimate goal is not just to use the laboratory for this particular project, but to have a broader laboratory where other faculty from around the University can come and do experiments related to these very important questions about conflict,” Sechser said.