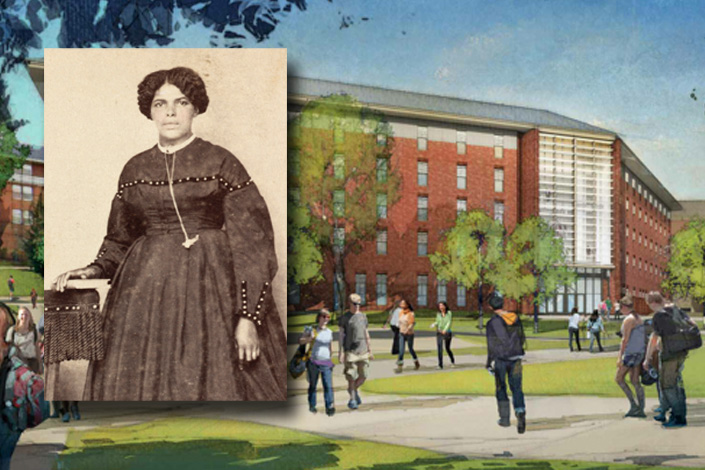 William and Isabella Gibbons were husband and wife, enslaved by different professors and living in different pavilions in the mid-19th century University of Virginia. Once emancipated, Isabella became a teacher at the Freedman’s School – now the Jefferson School – and William became a minister at Charlottesville’s oldest black church, First Baptist.

The U.Va. Board of Visitors passed a resolution on Wednesday naming the University’s newest dormitory building after the couple. Construction of the five-story “Gibbons House” is scheduled for completion this summer in time to house more than 200 first-year students this fall.

Dr. Marcus Martin, vice president and chief officer for diversity and equity, provided Sullivan with information about the Gibbonses that she presented to her cabinet. Sullivan and Martin then approached the U.Va. Committee on Names, which approved bringing a resolution to the Board of Visitors.

William Gibbons was born into slavery in 1825 or 1826 on an Albemarle County plantation and possibly belonged to Arthur Gibbons, a member of the Cabell family and a University student. In the 1840s, William was sold to Dr. Henry Howard, Arthur Gibbons’ professor of anatomy and surgery. Then he was hired out as a butler to professor William McGuffey, who had married Howard’s daughter, Laura. McGuffey, who taught moral philosophy and became well-known for the reading primers he edited, resided with his family in Pavilion IX.

“William Gibbons was an integral part of the McGuffey household in his role as the family’s butler,” research administrative assistant Leslie Walker wrote in a summary about the Gibbonses for the Commission on Slavery and the University. “Evidence suggests that members of the family aided William in his quest to become literate.” Walker’s report summarized research papers of Gayle M. Shulman and Scott Nesbit.

William married Isabella, who had also learned to read while a slave, in the early 1850s. Physics professor Francis Smith owned Isabella from 1853 until 1863, when she cooked for his family in the kitchens of Pavilions V and VI.

“Slaves who were husband and wife were usually owned by different families and rarely lived under the same roof. Isabella and William Gibbons were fortunate to live near each other on Grounds,” according to the report.

After freedom came with the end of the Civil War, William was minister to the Charlottesville congregation now known as the First Baptist Church, and several years later was called to the Zion Baptist Church in Washington, D.C., where he became a well-known leader. Isabella and their children remained in Charlottesville, and he visited them there.

He began formal theological study in the fall of 1884 at age 59, enrolling at Howard University as a part-time divinity student. After two years of classes at Howard, William Gibbons died of a stroke. Ten thousand mourners are said to have attended his funeral in Washington, and his death was reported in a front-page obituary in the Washington Post, according to independent scholar Gayle M. Schulman’s research, “Slaves at the University of Virginia,” housed in the Albert and Shirley Small Special Collections Library.

Isabella Gibbons taught in the Charlottesville Freedmen’s primary school from 1865 until sometime between 1886 and her death in 1889. It was also known that she taught her children to read during slavery, though it was illegal.

The New England Freedmen’s Aid Society sent Anna Gardner to Charlottesville to start the school where Isabella applied for a position. The Massachusetts abolitionist immediately took her on as an aide, and with additional training, hired Gibbons as a teacher.

“The former slave was well spoken, had a sense of personal dignity that earned respect, and had already started to teach others in the community,” the Gibbons report says.

The sites of the old school and of the First Baptist Church have retained importance in Charlottesville, Martin said. The former school now houses the Jefferson School African-American Heritage Center, which provides intergenerational programs that expose new audiences to genealogical, African-American and local history research. Both were featured locales in the October symposium on “Universities Confronting the Legacy of Slavery.”

Walker said the only campus building named after a slave she could find in her research is a dorm at the University of North Carolina, Chapel Hill, the George Moses Horton Residence Hall, named in 2007 for a slave and poet who was the first African-American to publish a book in the South.

Sullivan convened the Commission on Slavery and the University in 2013, charging the group to provide advice and recommendations on the University’s response to its historical relationship with slavery and enslaved people, specifically in the interests of memorializing them and educating the community currently and into the future.

At UVA, There Is a Club for Everyone END_OF_DOCUMENT_TOKEN_TO_BE_REPLACED