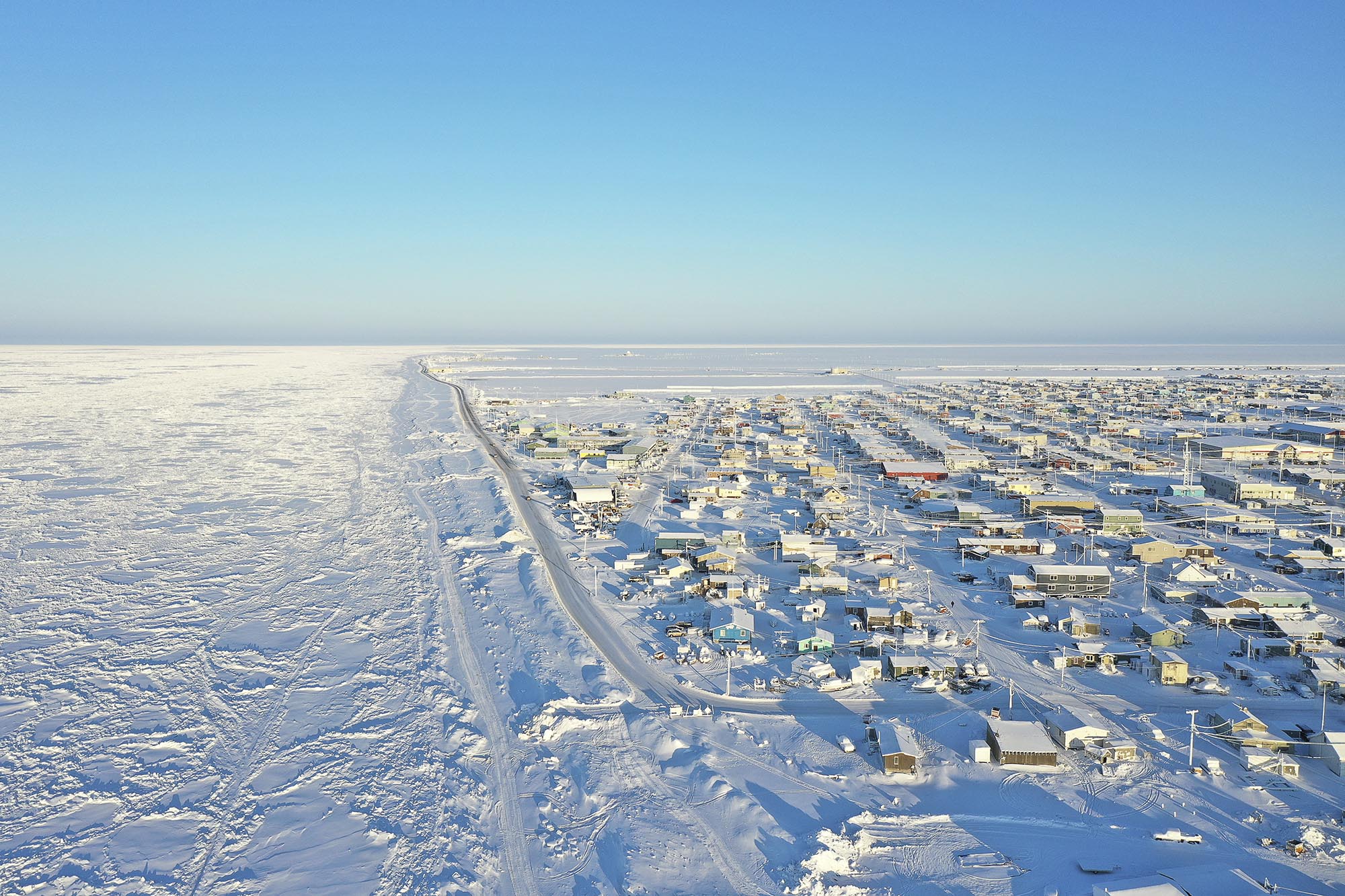 In recent years, University of Virginia researchers have combined forces across disciplines to address the challenges facing one of the most rapidly changing and important regions of the world, far north of Charlottesville, Virginia. The northernmost settlement in the U.S. Arctic, the city of Utqiaġvik, Alaska, is home to more than 4,000 people who are coping with the atmospheric and human impacts of climate change in a community built upon thawing permafrost along the coast of the Arctic Ocean.

The Alaskans’ efforts are being assisted by UVA’s newly formed Arctic Research Center, a collaboration of researchers and students who are studying everything from the environmental effects of extreme climate and climate change on Arctic ecosystems to the design of buildings, towns and cities, as well as the best ways for interdisciplinary researchers to collaborate on these goals with Arctic residents.

Earlier this month, the National Science Foundation, through its “Navigating the New Arctic” initiative, awarded the Arctic Research Center a five-year, $3 million grant to design and monitor a network of integrated meteorological, aquatic and geotechnical sensors throughout Utqiaġvik. These monitors will help UVA researchers from the College and Graduate School of Arts & Sciences’ Department of Environmental Sciences, the School of Architecture’s Arctic Design Group, the School of Engineering and Applied Science and the School of Data Sciences collect data to assist the Arctic community in developing design guidelines for future buildings and infrastructure that increase community resilience while minimizing environmental impacts.

Environmental sciences professor Howard Epstein, who has been conducting projects in the Arctic for 24 years, said the Arctic Research Center represents the efforts of a vibrant group of UVA researchers interested in addressing challenges in the region, with a warming climate leading to sea ice melts, new shipping routes and a growing human population. It also represents a concerted effort to collaborate directly with community leaders and residents of Utqiaġvik on producing knowledge to meet these challenges.

“What we’ve discovered is that many of the interesting questions facing the Arctic occur at the intersection of different disciplines,” said Epstein, principal investigator of the NSF award. “And you can’t understand all the different components that interact between the natural and built environments without also understanding how people operate within that realm. One of our hopes for this project is to collaborate with a local community that has a long history of involvement with a variety of federal agencies and universities on scientific research.”

Epstein is joined in the Arctic Research Center by four other co-principal investigators from different UVA schools. Landscape architecture assistant professor Leena Cho and architecture associate professor Matthew Jull, co-founders of the UVA-based Arctic Design Group, which has been carrying out research on the design of the built environment in the north since 2012, join the Arctic Research Center from the School of Architecture. Luis Felipe Rosado Murillo is an associate researcher in UVA’s School of Data Science, and Caitlin Wylie is an assistant professor of science, technology and society in the School of Engineering and Applied Science. Claire Griffin, a postdoctoral researcher in the Department of Environmental Sciences, is also involved.

Their previous efforts together received multiple grants, including funding from UVA’s Environmental Resilience Institute and the Center for Global Inquiry and Innovation, which led to the establishment of a new Education Partnership Agreement between UVA and the U.S. Army Corps of Engineers’ Cold Regions Research and Engineering Laboratory.

Most recently, a multi-day symposium titled “Bridging Science, Art and Community in the New Arctic” last September offered a hybrid platform for their cross-disciplinary approach. The meeting provided an opportunity for eight young adults from Alaska to visit UVA and share their perspectives on living and working in Arctic communities; it also featured an eco-acoustics session by UVA music professor and Alaska native Matthew Burtner.

This month’s NSF grant signals growing recognition of the impact of UVA researchers’ work in the Arctic, Jull said.

“There has been Arctic-focused research going on at UVA for four decades, but this is really the first time that the National Science Foundation has given a very large grant to a collaborative, multidisciplinary research group here, and that’s exciting for us,” Jull said. “This puts the University of Virginia on the map in terms of our Arctic research.”

Adapting to a Changing Environment

Within Alaska’s North Slope Borough region, the traditional Inupiaq culture has thrived in the cold. Gordon Brower, the North Slope Borough’s director of planning and community services, said there is a need now to better understand the changing dynamics of the permafrost upon which their community is built.

“We depend to a large degree on traditional foods that are stored in the ground, because using modern walk-in freezers does not age the food in a way that a traditional cellar in the permafrost would. But we’re seeing changes underground in traditional cellars, and the food is going bad. It’s alarming,” Brower said. “Finding a way to address these concerns is very important as climate impacts continue, from coastal erosion to the loss of sea ice, and we face an ever-increasing need to adapt to the change in how we construct homes, where we select lands for subdivisions and to gain a better understanding of how to interact with the change in the permafrost. I am glad these efforts are under way that may, perhaps in working with traditional cultural activities, provide some answers.”

Cho, Jull and Epstein all said this is an essential time to study and assess the impacts of climate change and increased economic interest in the Arctic. With coastal erosion and rising temperatures leading to the thawing of the permafrost upon which their communities are built, Arctic cities and towns face critical decisions about their future. And the people of Utqiaġvik will play a critical role in the Arctic Research Center’s efforts to plan, place and maintain the network of environmental sensors funded by the NSF project, Cho said.

“At the end of the day, we want to make sure that our discoveries and findings can be synthesized into something that is useful for communities that are facing these challenges,” Cho said. “We have been developing a working relationship with the people living there the past seven years, because they are the ones experiencing the challenges, physically and materially. Working with them, it’s important to listen and learn the specific areas of the community to identify the best locations where to install the project’s sensors and set up to collect this wealth of data over the next five years.”

Wylie, a social scientist, will study how the UVA team and community members collaborate. A substantial part of the project consists of building and fostering a “research data commons” in collaboration with Alaskan communities, Murillo said, “and this is what we will work on for the purposes of indigenous data sovereignty.”

“Understanding a problem as complex as climate change requires all kinds of expertise, including residents’ lived experience and a variety of academic disciplines,” Wylie said. “So it’s crucial for us all to learn each other’s ways of understanding the environment so that we can truly integrate our work.”

“I have had the pleasure of working with Matthew [Jull] and the UVA Arctic focus groups for a few years now,” Nelson said.  “UVA recognizes the importance of local collaboration and involvement, not only for implementation of innovation, but to help gauge feasibility, scalability and practicality.”

In the future, the Arctic Research Center’s project aims to offer opportunities for UVA students – Ph.D. and master’s candidates, and undergraduates – to travel to Utqiaġvik to assist with the NSF project.

“Going to the Arctic to understand firsthand what it’s like working with the community, what the environment is like and what are the challenges they’re facing – that can have huge ripple effects for our students,” Jull said. “Some of them may go into policy work or all sorts of different careers as leaders in their fields. The decisions that get made – down the road in terms of the Arctic and its environment – will be influenced by the experiences they have, and that’s a really important part of this research ecosystem we’re forming.”