One Final Feel-Good Story From the Orange Bowl 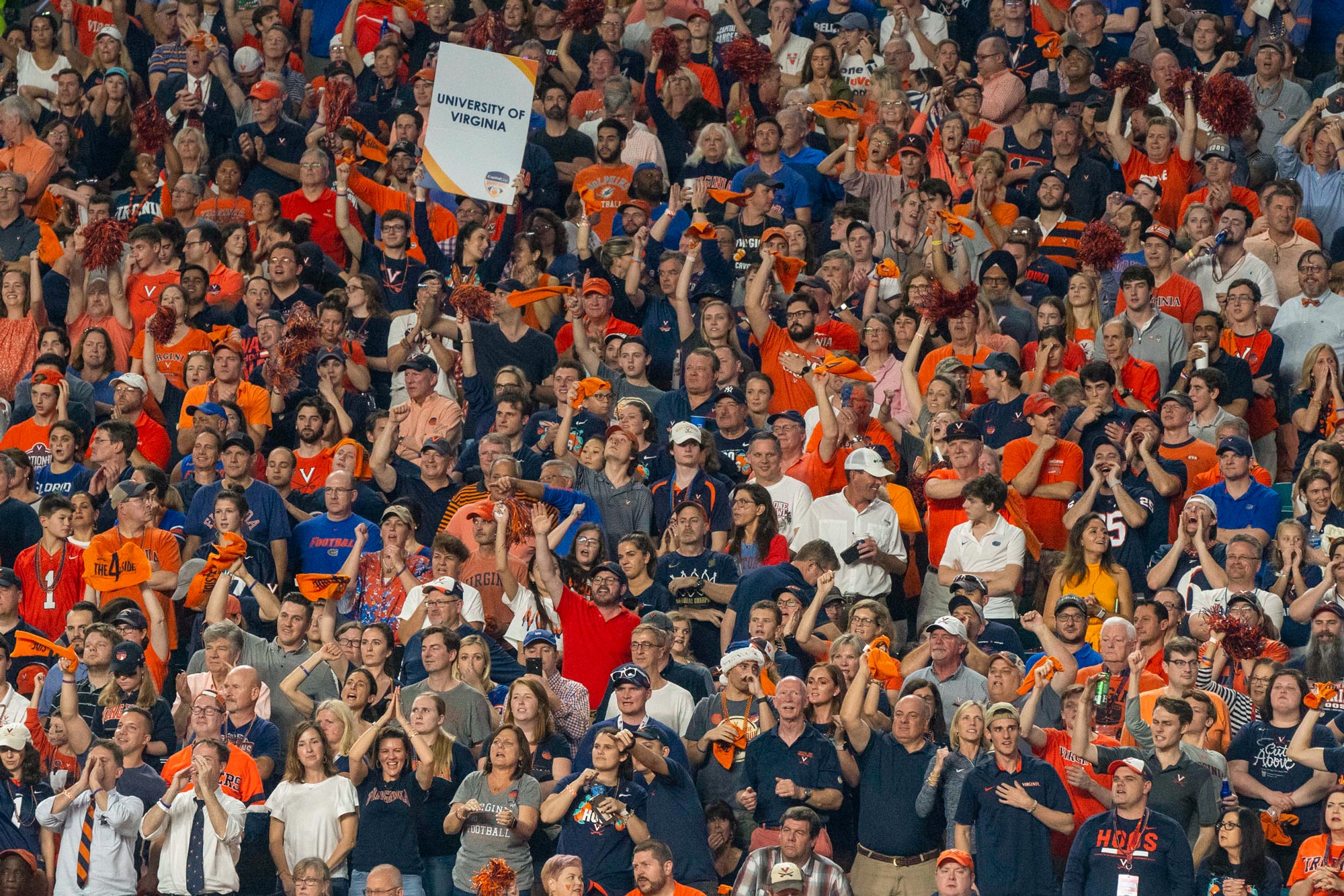 There is an art to cracking stone crab claws.

Properly enjoying this delicacy of Miami involves confident use of claw crackers, dipping sauce deftness and small fork dexterity. Recently, I was a guest at the Orange Bowl President’s Dinner representing a small University of Virginia delegation during bowl week festivities and was fortuitously seated next to Orange Bowl treasurer (and stone crab cracking veteran) Hector Tundidor. He was my guide, with Yoda-like wisdom, on a culinary and cultural evening punctuating the many wonderful things Miami had to offer.

With this bowl game dating back to 1935, Hector’s profound spirit of hospitality and Miami pride continued a legacy at the root of why the Orange Bowl was created and showed how fellowship and football perfectly dovetailed in this culminating week. I left the table with heart and belly full, but there was a little bit more to the story that evening.

While walking out, I passed a group of UVA athletics department friends posing for a photo. As I approached them to say goodnight, a gentleman passed me to join the photo. He then stopped, paused, looked at my tie, and said, “I like that tie!” It was striped, UVA orange and blue, and the first time I was wearing it. I smiled back, said thanks, and then headed toward the bus that was bringing me back to the hotel. 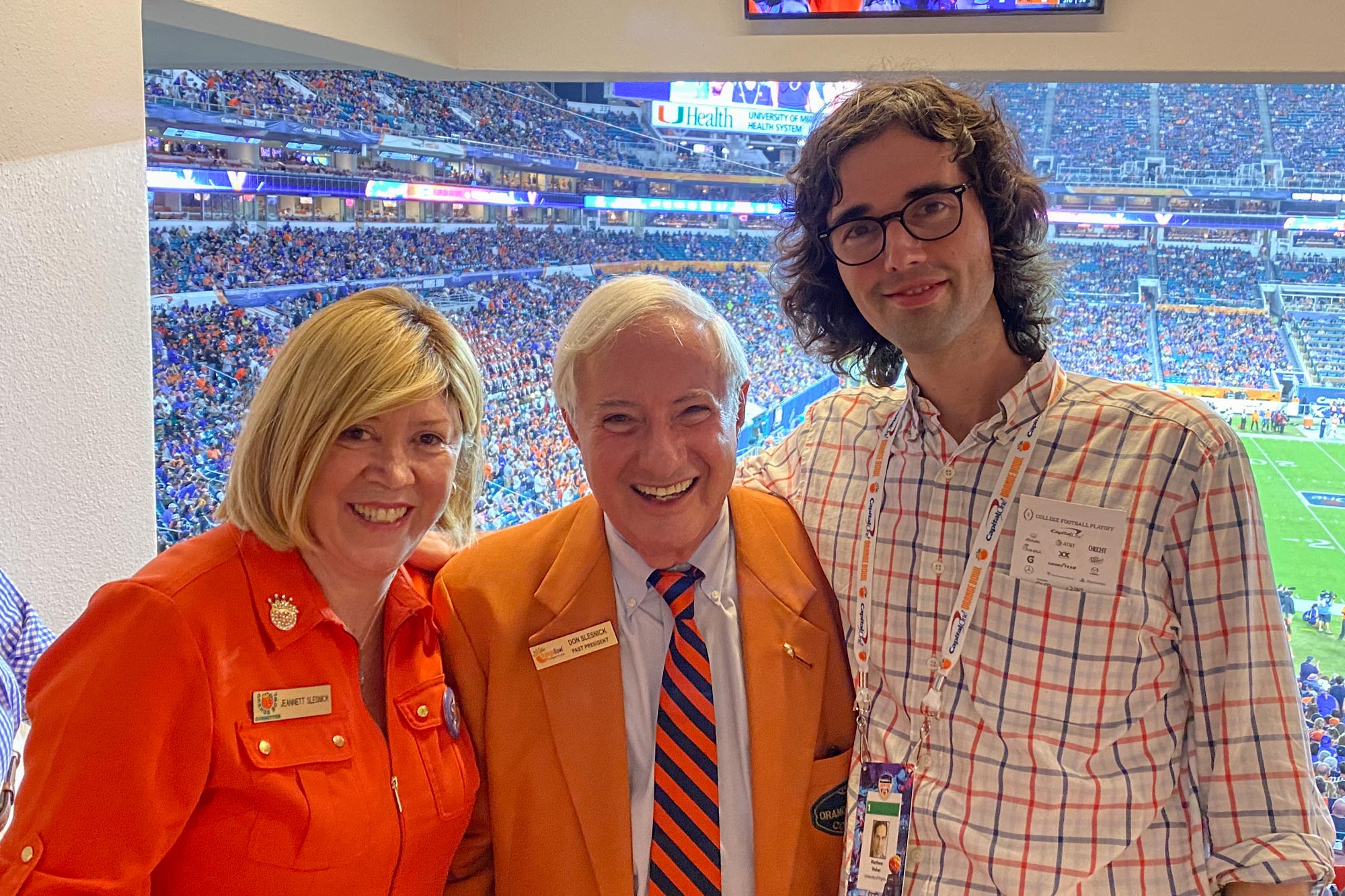 Something inside of me – perhaps, the stone crab meat – prompted me to stop mid-lobby. I was touched by the generosity of the people and the city and a dinner where everyone could not have been nicer to us. I was swelling with a deep sense of gratitude and felt a desire to show it. I promptly turned around, jogged back to the main ballroom, and with purpose, took off my tie. I inspected it for stains, ironed it out with my hand, and then asked myself if it was totally bonkers and perhaps poor Emily Post form to approach a stranger at the end of a dinner and give him a barely used, yet still used, tie – with little explanation aside from knowing he liked it. I am not always the most socially adept person when it comes to fanciness and form, and while my wife would’ve strongly recommended I not risk embarrassing myself – or more importantly, the University of Virginia – I threw caution to the wind and gingerly approached the man, holding the tie like a ceremonial garment from Jefferson himself.

“Sir, this may seem odd, which I am fully aware of, but you mentioned you liked my tie, and in the spirit of paying forward the generosity and hospitality of this evening and this week, I’d like to give you this tie. I have worn it once, so I think it is still good, and am not required to wear a tie the rest of the week, so I in fact, no longer need a tie and so, it would be an honor if you accepted this tie, which I would really like to give you as a way of me, and really all of us at UVA, to say thanks.”

My rambling, improvised soliloquy was (thankfully) now over and standing there was a man, curious-looking, wearing a tie, holding a new, well, actually, a new used tie, and my friends from the athletics department, including Director of Athletics Carla Williams, wondering what in the world they were witnessing. I was in deep and now needed to get out. I promptly wished them all a good night and in a quick, self-preserving act, turned around and sprinted to the bus like someone who might have just stolen a tie.

I convinced myself on the way home that, while unconventional, I was glad I did it. I really wanted to give that nice man who liked my tie that tie, and that was the end result. It was the best, albeit not least-awkward way, of thanking Hector by paying it forward to another.

The rest of the weekend was filled with various other Orange Bowl activities, culminating in the actual football game on Monday night.

A few minutes into the third quarter, I received a tap on my shoulder that someone wanted to see me. The irony is that I am typically the person doing the tapping, telling other people in boxes or at events that they want to be seen by a visitor. Never have I been the reason why someone drops by.

I turned around, and there before me, as I would come to know, was Don Slesnick, a graduate of the University of Virginia Class of 1965, former president of the Orange Bowl Committee; former longtime mayor of Coral Gables, Florida; managing partner of the law offices of Slesnick & Casey; Vietnam War veteran; and winner of the U.S. Army’s Outstanding Civilian Service Award. 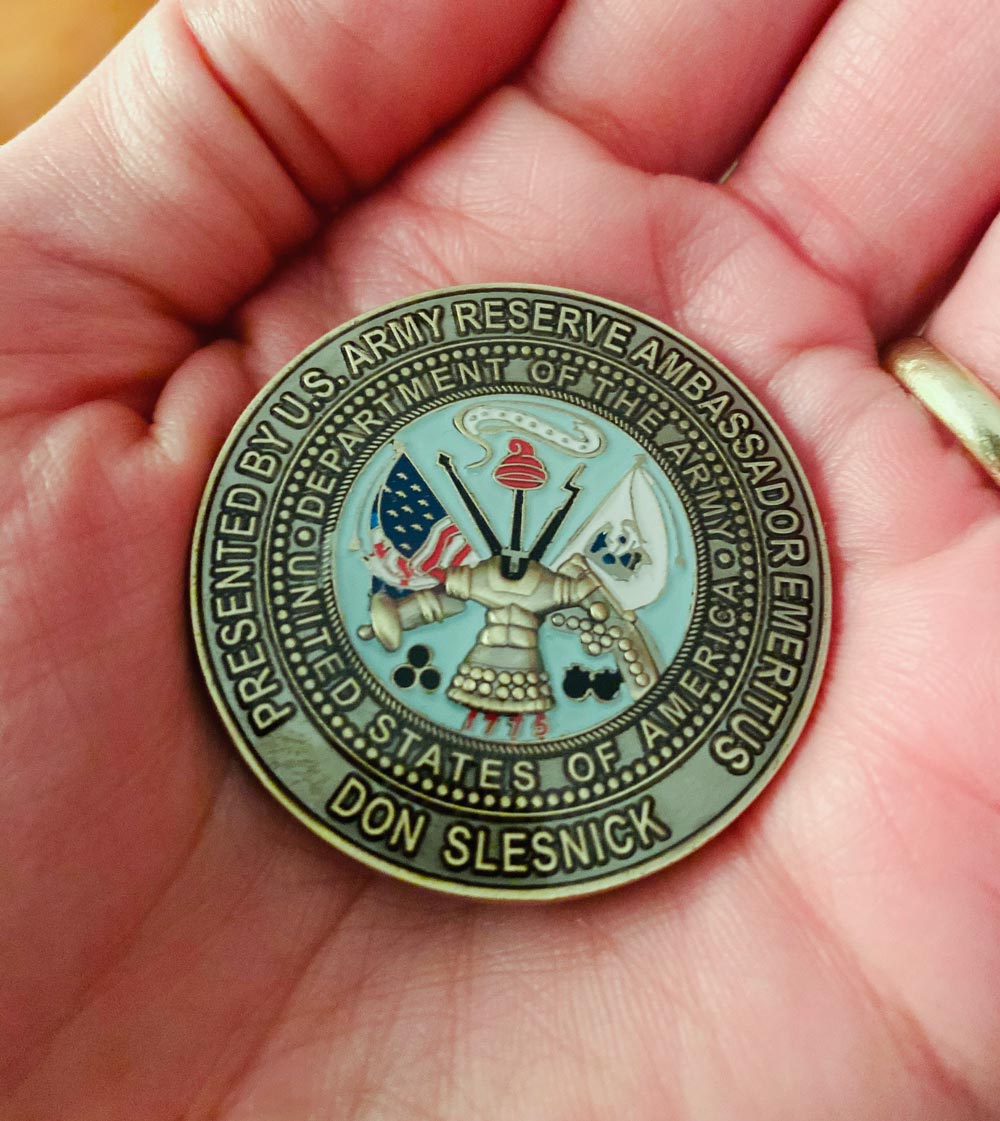 Beaming with the widest of grins, he also was wearing an orange-and-blue-striped tie.

“I came to find you, Matt, and I want to thank you in the most special way I know,” he said.

Mr. Slesnick then proceeded to shake my hand, carefully slipping me a U.S. Army Reserve Ambassador Challenge Coin, minted with his name on it, proceeding to explain to me the significance of these coins in the military and how they are meant to recognize something special and create a lasting bond.

He then introduced me to his wonderful wife; we both talked about our UVA journeys, snapped a photo and made plans to have lunch the next time he was in Charlottesville.

I held that coin the rest of the night.

In the broader recapping of UVA’s first-ever Orange Bowl week, this tale on ties, crabs and coins may serve at best as detritus in the Cavalier canon. But for me, in terms of UVA magic unexpectedly relished in the cracks of pageantry and pigskin, there was nothing more grand.

Matt Weber is senior assistant to UVA President Jim Ryan and a doctoral student at UVA’s Curry School of Education and Human Development.

A Year We Will Never Forget: 2019-20 in Review END_OF_DOCUMENT_TOKEN_TO_BE_REPLACED

‘What Will You Carry With You?’ Remarks From UVA President Jim Ryan END_OF_DOCUMENT_TOKEN_TO_BE_REPLACED