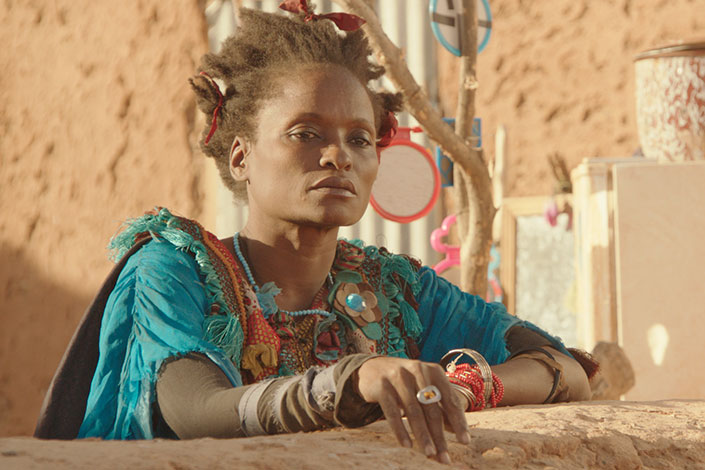 Born in Mauritania and raised in Mali, Sissako studied in Moscow before settling in France in the early 1990s. He now travels the world directing and screening his films – and accepting awards for his work.

Charlottesville has also been a favorite stop for him. For the third time in eight years, Sissako will return to the University of Virginia from April 9 through 12, through the support of U.Va.’s Department of French, Office of the Provost and the Vice Provost for the Arts, in partnership with the Paramount Theater and the Virginia Film Festival.

Sissako is one of the few filmmakers from Africa to reach a level of international acclaim and influence, (along with Ousmane Sembène, Souleymane Cissé and Djibril Diop Mambety). Sissako’s ongoing themes include globalization, exile and the displacement of people.

His current film “Timbuktu” was selected to compete for the Palme d’Or at the 2014 Cannes Film Festival and was one of the five 2015 Academy Award nominees for Best Foreign Language Film. It also raked in seven of France’s coveted César awards, including Best Film, Best Director and Best Original Screenplay.

Sissako’s U.Va. residency will include speaking at an African cinema class, a cinematography class and a French film seminar. He also will participate in workshops, master classes and discussions with members of the University community.

In addition, “Timbuktu” will be screened at 7 p.m. on April 11 in a free public event at the Paramount. The screening will be followed by a conversation and audience discussion with Sissako. U.Va. students will be invited to a special pre-screening reception with the filmmaker before the event.

These events offer an opportunity for the University community and the public to explore a broad range of issues, including religious extremism, African cinema and the art of filmmaking.

“Timbuktu,” set in the desert of northern Mali near the World Heritage site of Timbuktu, recounts dramatic events in the life of a herder and his family set against the backdrop of the Islamist takeover. Like all Sissako’s films, it is a detailed and subtle portrait of the human interactions that can sometimes be obscured in media accounts of global conflicts. The gorgeous visual and aural portraits of desert landscapes, people and the historic sites of Timbuktu come to life throughout the film.

This is not the first visit that Sissako has made to the University.

In 2007, the U.Va. French Department hosted the North American premiere of his critically acclaimed 2006 film, “Bamako,” to a packed house at Vinegar Hill Theater, which was followed by a community discussion with the filmmaker. It was a brief stopover for Sissako, who was on his way to Virginia Commonwealth University’s annual French Film Festival in Richmond.

“The conversations were so intense and lively, and the public response so positive, that we wanted to find a way for him to come back, stay longer and have a chance to meet more people and have more sustained conversation with the U.Va. and Charlottesville communities,” said Alison Levine, associate professor and director of undergraduate programs in the French Department.

Sissako was invited back to the University in 2008 for a five-week residency in conjunction with the Virginia Film Festival. His extended visit included a retrospective of his films, post-screening discussions with the filmmaker, a series of master classes and participation by Sissako in the film festival. The public events were well attended by diverse audiences from Charlottesville and beyond.

When “Timbuktu” debuted at Cannes last spring, there was an intense flurry of media attention around it. Sissako was all over the European media, and the film received rave reviews.

“I was actually kind of surprised last fall when my phone rang and it was Sissako, just saying hello from Los Angeles where he was attending a few screenings of ‘Timbuktu’ for Academy members,” Levine said. “At that time, he told me that he was hoping to come to the United States in April for a tour of universities and that he’d love to include Charlottesville and U.Va. because of our long-term friendship.”

Levine said that when “Timbuktu” actually did win the nomination, she thought perhaps Sissako’s plans would change. But true to his word, he will be coming to the University.

“It is incredibly exciting for us to have Abderrahmane Sissako once again in our midst,” Levine said. “He is arguably one of the greatest filmmakers alive today, and his stunningly beautiful films shed light on matters of urgent importance.”

Additional funding for the visit is provided by the Global Studies Program, Vice Provost for Educational Innovation and Interdisciplinary Studies, Institute of the Humanities and Global Cultures, Institute of World Languages, Corcoran Department of History, McIntire Department of Art/Kevin Everson, Virginia Center for the Study of Religion, Carter G. Woodson Institute for African and African American Studies, Office of African-American Affairs and the Institut Français and the Cultural Services of the French Embassy.

Meet the New Cavalier on Horseback: She’s Eager To ‘Carry On a Legacy’ END_OF_DOCUMENT_TOKEN_TO_BE_REPLACED

Housing Changes Are a Breath of Fresh, Cool Air – Especially for Lawnies END_OF_DOCUMENT_TOKEN_TO_BE_REPLACED

Virginia Football – For All Virginia END_OF_DOCUMENT_TOKEN_TO_BE_REPLACED