Painter Crozier Leaves Legacy to the University and Charlottesville 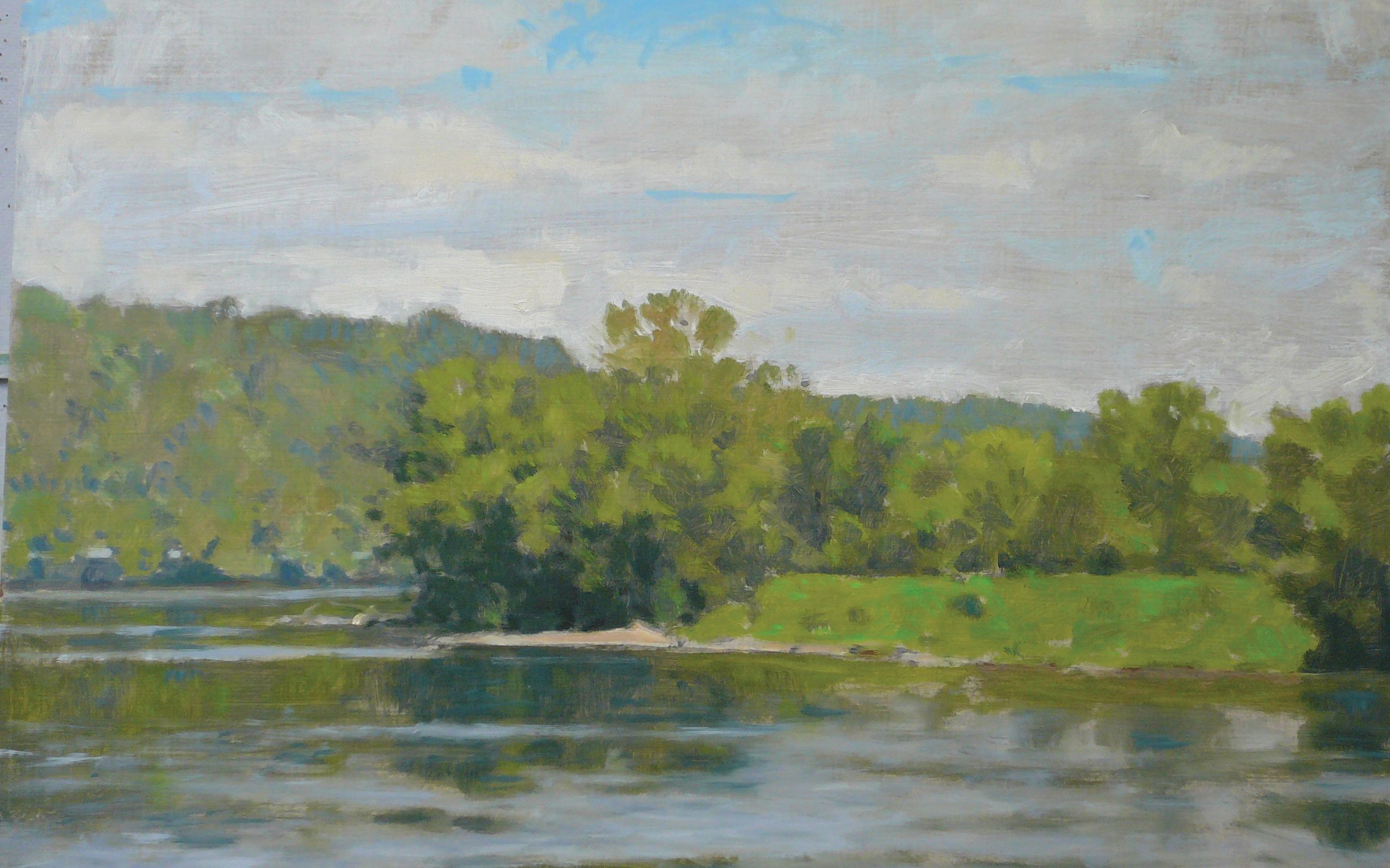 November 19, 2010 — Richard Crozier is a prolific painter. Though he's been keeping a list of his paintings only since 1987, that list now includes more than 3,000 works. He paints about five canvases a week, capturing change around Charlottesville and the nearby landscape.

He's attracted to the different light at various times of day, changes in the landscape as the seasons come and go, or more often than not, changes in the built environment.  Anything he sees around him – houses, construction sites, old buildings, the Rotunda in all weather and from all angles, the Blue Ridge Mountains – all are fair game for his canvas and paintbrushes.

An exhibition, "Recent Works," will be on view in the University of Virginia's Ruffin Gallery starting with an opening reception on Dec. 3, from 5:30 to 7:30 p.m., and closing with a Final Friday Reception on Jan. 28. The gallery is open weekdays from 9 a.m. to 5 p.m.

The exhibit celebrates Crozier's career as an artist as well as teacher. He will retire in January from the McIntire Department of Art in U.Va.'s College and Graduate School of Arts & Sciences after teaching beginning drawing and upper-level painting courses at the University since 1974.

Crozier describes his work as "one picture project – a portrait of Charlottesville." After 36 years, he doesn't seem to be able to get his fill of creating what he calls his "visual diary."

"The more I do, the less I am inclined to do other things," Crozier said. "The more I paint, the more I find interesting. So much changes. It keeps me busy."

Currently, he's painting the new band rehearsal hall in the Betsy and John Casteen Arts Grounds as it rises during construction; he said that the steel structure at times had a very sculptural quality. He made a similar series of paintings of the construction of Ruffin Hall, the home of studio art that opened in 2008.

Crozier received his M.F.A. in 1974 at the University of California, Davis, where he studied with contemporary American artists Wayne Thiebaud, William T. Wiley and Roy De Forest and was introduced to abstract painting.

"That was an exciting time," Crozier said. "They gave you a studio and left you alone."

It's also when he started taking his canvas to paint landscapes en plein air. "I wanted to paint from nature," he said.

Although his paintings are about recognizable landscapes, Crozier approaches each subject from an abstract perspective. The abstract approach is in the execution, Crozier said. He thinks about the picture as an object, and the thickness of paint, texture, quality of the surface, as well as the image are all very important.

"It's all about making choices of what to do and what not to do. It's about manipulation and scale and responding to the geometry and structure of the landscape," he said. "You are creating the painting."

That philosophical approach had a profound effect on Charlottesville artist Edward Thomas, a 1996 graduate of U.Va.'s School of Architecture.

While at U.Va., Thomas took a few classes with Crozier and said he often wasted a lot of time fretting about finding the perfect subject, rather than concentrating on painting.

"His style of teaching was one of total encouragement. I learned you can make a beautiful painting out of everything – even seemingly mundane objects," Thomas said.

He considers Crozier a mentor and friend and over the years has been struck by his "incredible knowledge about history. He always knows a whole list of artists and books to recommend," Thomas said.

Third-year printmaking major Hannah Barefoot took a painting class with Crozier last spring at the recommendation of her mother, Wendy Miller, who studied with Crozier in 1976 as a U.Va. undergraduate.

Barefoot was interested in Crozier's method of painting – working on a manageable scale – and also his attention to the detail of his craft.

"I remember a demo he gave on how to set up a palette and how he works outside," she said. "He told a story about how when he works, he usually sits in his car and paints smaller landscapes. He said he works until he gets uncomfortable or too chilly and then he'll move to some other place.

"I just thought that was the most amazing method. He just constantly is framing, painting and observing a scene."

Crozier's enthusiasm and passion have also rubbed off on colleagues. Studio art professor Philip Geiger is a fellow painter and friend. "Dick has been a great friend who has helped me in many ways over the years," he said. "When we shared studio space in the 1980s, his energy and persistence inspired me many times. With his retirement we lose a great teacher who was loved by all."

Each semester, hundreds of students, mostly from the College of Arts & Sciences, sign up for drawing classes. Most will not go on to become studio art majors. For the department's fall newsletter, studio art chair Dean Dass asked Crozier, "What do you want to communicate to your students?"

Crozier's answer: "I want them to realize that art is something they can do. I want them to keep their mind open, to look at art. For the rest of their lives, no matter if they become doctors or businessmen or anything really, if they continue to look at art then we will have accomplished something. They will think that is something I did. One looks at art in a very personal way when one has drawn and painted. There is a real conversation taking place."

In retirement, Crozier will be able to continue his passion. "I'm going to be doing a lot of painting," he said.

With the many paintings he's already done, it's hard to think there's more for him to paint. But as he said, "I'm interested in landscape in flux, when things are changing."

As you travel around town you may see Crozier sitting in his car with his canvas and palette, or standing at his easel on a street corner. Take a few moments to stop and watch him work. You may begin to see the world in a different way.