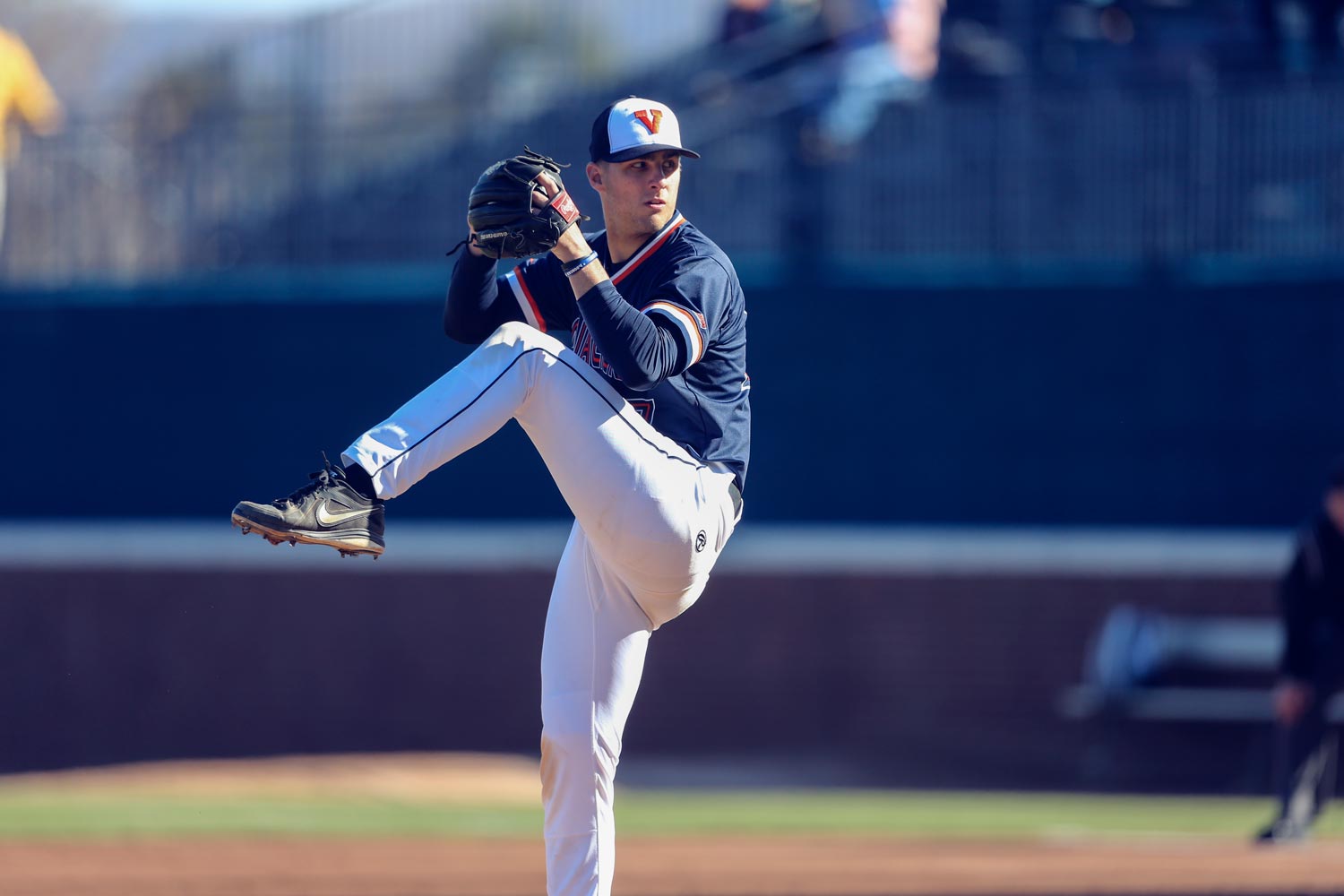 After missing the University of Virginia’s 2018 baseball season with an elbow injury, pitcher Chesdin Harrington knows all too well how easily an athlete’s career can get derailed.

That’s among the reasons Harrington, a rising fourth-year student from Hanover County, refuses to be defined as simply a baseball player.

“What has made my experience so great is meeting other people outside athletics at the University,” said Harrington, who’s majoring in media studies and American studies. “Not necessarily removing myself from athletics – I love everything about it, and I love being a part of it – but I think student-athlete involvement outside of athletics is really important.”

A graduate of Patrick Henry High School in Ashland, Harrington has made a point of broadening his interests since enrolling at UVA in the summer of 2015.

Harrington, as president, leads the executive board of UVA’s Student-Athlete Advisory Committee for 2018-19. Dan Jacobs, an academic coordinator who oversees the organization, describes SAAC as essentially “a student council for student-athletes.”

Each of Virginia’s 27 varsity teams has at least two representatives on the committee. Also on the executive board for 2018-19 are vice presidents Lacy Smith (softball) and Aaron James (men’s soccer), administrative officer Heidi Long (rowing), and communications officer Erica Susi (women’s tennis).

For Harrington, who was communications officer in 2017-18, this will be the third year he’s participated in SAAC.

“I think Chesdin being on the executive board last year has really helped to give him some perspective, but also some continuity too,” Jacobs said.

To be effective, Jacobs said, a SAAC president has “to be a good communicator and be somebody who also has an open mind, and I think that’s where Chesdin thrives. He’s a great communicator. He’s a great listener, and he definitely is engaging. He tries to involve as many people as possible.”

SAAC is not the only organization in which Harrington is active at UVA. In May, he was named as a student member of the University steering committee for the inauguration of incoming President James Ryan. He’s a Fourth-Year Trustee; volunteers at Madison House; supports Athletes for Equality, an advocacy group for LGBT and other minority student-athletes at UVA; and participates in the Leadership 2K program. He’s also volunteered his time at nearby Meriwether Lewis Elementary School.

“This university has so much to offer, and Chesdin Harrington has decided to get everything out of this experience that he can possibly get,” Virginia head baseball coach Brian O’Connor said.

“I think it’s great. He’s admired by his teammates. He’s engaged in every facet of the University, and that’s impressive and adds a lot of value to the entire [baseball] program.”

Organizations such as SAAC, athletics director Carla Williams said, are “critical to the overall experience of the student-athletes. And that’s why programming for student-athletes, for their benefit, for their advancement, all those efforts are so important.

When UVA fans last saw Harrington on the mound, it was June 5, 2017, in the NCAA Tournament regional in Fort Worth, Texas. In 4.2 innings of relief – his longest appearance as a Cavalier – the 6-foot-1, 190-pound right-hander allowed no hits and no runs.

For the season, Harrington posted a 3-2 record with a 2.41 earned-run average. Sixteen of his 18 appearances came out of the bullpen.

“He was very, very consistent for us,” O’Connor said, “and obviously pitched well at the regional. He had a lot of poise, and he was a guy coming back [in 2018] that we had a lot of confidence in. He’s somebody that you could bring out of the bullpen and he could hold the game for you.”

Harrington never got the opportunity to do so last season. His injury dates back to the 2017 season. That May, he missed several weeks with pain in his right elbow. He returned to pitch once in the Atlantic Coast Conference Tournament and once in the NCAA Tourney, and then rested his arm last summer.

“I just lifted and rehabbed, got a little bit stronger,” Harrington said, “and then came back in the fall and kind of eased back into throwing. Some days it felt really good. Some days it was kind of iffy. But I was piecing it together and I was ready to go.”

When the spring semester started and the Cavaliers resumed practice, however, Harrington’s right arm began bothering him again. After conferring with Brian McGuire, UVA’s athletic trainer for baseball, Harrington underwent an MRI that revealed a problem.

“Surgery was a route, but it was an unneeded route. It wasn’t anything that would make any sense,” Harrington said.

In late January, platelet-rich plasma, which promotes healing, was injected into his right arm. “We were hoping I would be back at some point in the beginning of April,” Harrington said, “but it just didn’t quite progress as we were hoping it would.”

O’Connor said: “He just never got to the point that we felt like he was going to be able to be effective and be back all the way.”

And so, before UVA’s final regular-season series, Harrington and the coaching staff decided it made sense for him to take a medical redshirt year and save a year of eligibility.

“It ended up being the right move,” O’Connor said. “He felt good about it. I’m excited to have him back this next year, and hopefully he’ll be at full strength and really do a great job for us.”

Harrington has been rehabbing this summer with McGuire and lifting weights under the direction of Ed Nordenschild, UVA’s strength and conditioning coach for baseball. He’s also incorporated yoga into his regimen.

He feels good, Harrington said, but “I think the real true test is going to be how it feels when I start throwing again. I think progress is being made. I think that was seen throughout the spring. It maybe just took a little bit longer than we might have anticipated.”

Harrington hopes to start throwing again by next month. The goal, he said, is to “be ready to go with little to no restrictions come fall.”

In each of O’Connor’s first 14 seasons at Virginia, his team advanced to the NCAA tournament. (The Cavaliers have reached the College World Series four times and won the program’s first NCAA title in 2015.) That streak ended this year, when the injury-plagued Wahoos finished 29-25.

The team’s struggles made a frustrating situation worse for Harrington, who would have had a prominent role on the pitching staff.

“There were some days when I was not in a good mood, maybe was not a great teammate,” he said.

As the season went on, however, he saw how teammates such as Jack Weiller handled adversity and tried to follow their examples. Like Harrington, Weiller arrived at UVA in the summer of 2015, but a hip injury limited him to two games in 2016 and forced him to redshirt in 2017. (Weiller appeared in 17 games this year.)

For all of Weiller’s struggles, “you would never know by talking to Jack, because he’s the most humble guy,” Harrington said. “He’s somebody who is always cheering for the next guy up. It doesn’t matter about his role. It’s about the team’s success. I kind of realized, ‘Right now I’m kind of feeling sorry for myself, and I shouldn’t be. It should be me really cheering on the next guy up.’”

Harrington said his setback gave him “an opportunity to kind of lead from a different perspective. I wasn’t going to be the guy on the field today, tomorrow or maybe even the whole year, but I was going to be the guy who was cheering the next guy on and rooting for our success as a team.”

He grew up rooting for the Cavaliers. One of his grandfathers, Frederick Richardson, was a chemistry professor at UVA, and Harrington’s mother attended nearby Albemarle High School.

“That just made me a UVA fan my whole life,” Harrington said. “This is where I wanted to come, and then everything just kind of clicked when recruiting started.”

“He was always a fantastic leader,” said Hanback, who also played with Harrington in youth leagues and in middle school. “He was a competitor. He played hard. He encouraged us. He was an all-around great teammate and great football player.”

Harrington committed to UVA in May 2014. At that point, Hanback recalled, “UVA hadn’t been recruiting me. I had other schools sending me letters and stuff – [Virginia] Tech was probably the first school that started recruiting me – but I hadn’t received anything from Virginia.”

Hanback was a lifelong UVA fan, and “it was his dream to play football here,” Harrington said, “I just couldn’t understand how he wasn’t getting [interest from the Cavaliers]. I was like, ‘What do we gotta do to get my man a look?’”

Harrington seized the initiative. He tweeted information about Hanback to members of the Cavaliers’ football coaching staff.

“I kind of laughed about it and didn’t think anything would come of it,” Hanback said. “What are these coaches going to look at some random kid’s tweet for?”

The next day, however, Hanback received an email from Scott Wachenheim, then the Cavaliers’ offensive line coach. Wachenheim said the coaching staff had “watched my film and wanted me to come to a camp,” Hanback recalled.

“I went to the camp, and from there the recruiting started, and then I got offered the summer going into my senior year, and that’s when I committed [to UVA].”

That’s what friends are for, right?

“Chesdin won’t take any credit for getting me my offer … but I’ll give him a lot of the credit,” Hanback said, “because honestly, I wasn’t on [UVA’s] radar until he said something about it.”

A Year We Will Never Forget: 2019-20 in Review END_OF_DOCUMENT_TOKEN_TO_BE_REPLACED

‘What Will You Carry With You?’ Remarks From UVA President Jim Ryan END_OF_DOCUMENT_TOKEN_TO_BE_REPLACED