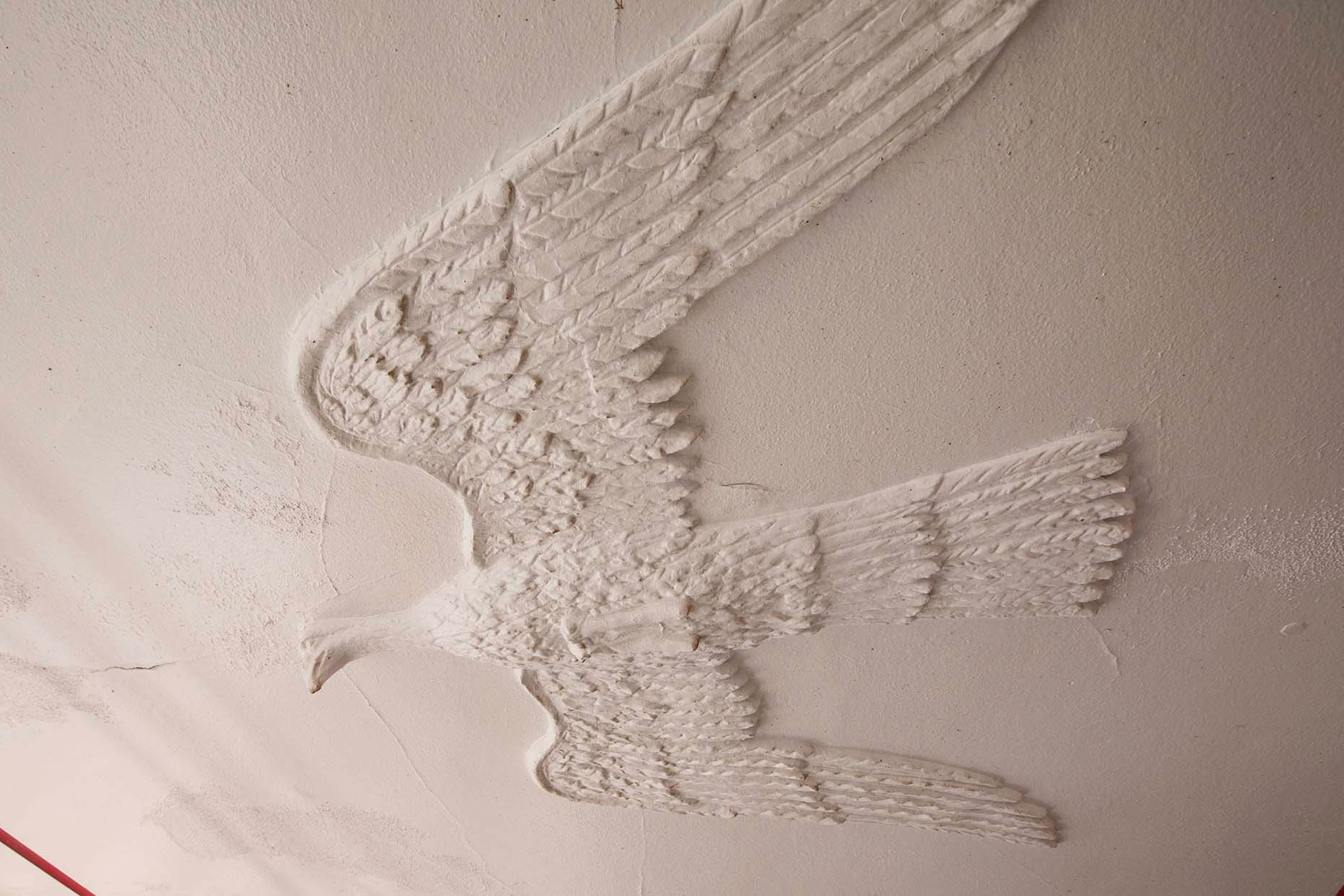 The eagle was most likely first installed when the Rotunda was rebuilt following the 1895 fire. (Photos by Dan Addison)

One Bird helped save another.

Master plasterer Noel Bird was on Grounds at the University of Virginia recently to examine and preserve the plaster eagle that decorates the ceiling of the Rotunda’s south portico – another small part of the University’s ongoing renovation of the UNESCO World Heritage site.

The figure of the bird was cast in the late 1890s as a decorative element of the portico ceiling, part of the Stanford White re-envisioning of the Rotunda. The eagle’s wings spread wide within a 5- to 6-foot circle, with its head and beak pointed toward the portico floor.

The Rotunda, designed and constructed in the 1820s by University founder Thomas Jefferson, was heavily damaged by fire in 1895. University officials brought in White, a principal architect in the New York City firm of McKim, Mead & White, to redesign Jefferson’s vision of the Rotunda.

“There was almost certainly not an eagle there in Thomas Jefferson’s Rotunda,” said Brian Hogg, the senior preservation planner in the Office of the Architect for the University. “That was a Beaux Arts motif, not a Federal one.”

Beaux Arts designs, which were popular between the 1880s and the 1920s, were more ornate and grandiose, while architects in the Federal period generally used plainer features.

Mark Kutney, a historical conservator in the Office of the Architect, said that eagles were a motif elsewhere in the Rotunda in White’s design.

“There were eagles on the interior of the dome,” he said. “There was a row of eagles that surrounded the oculus.” 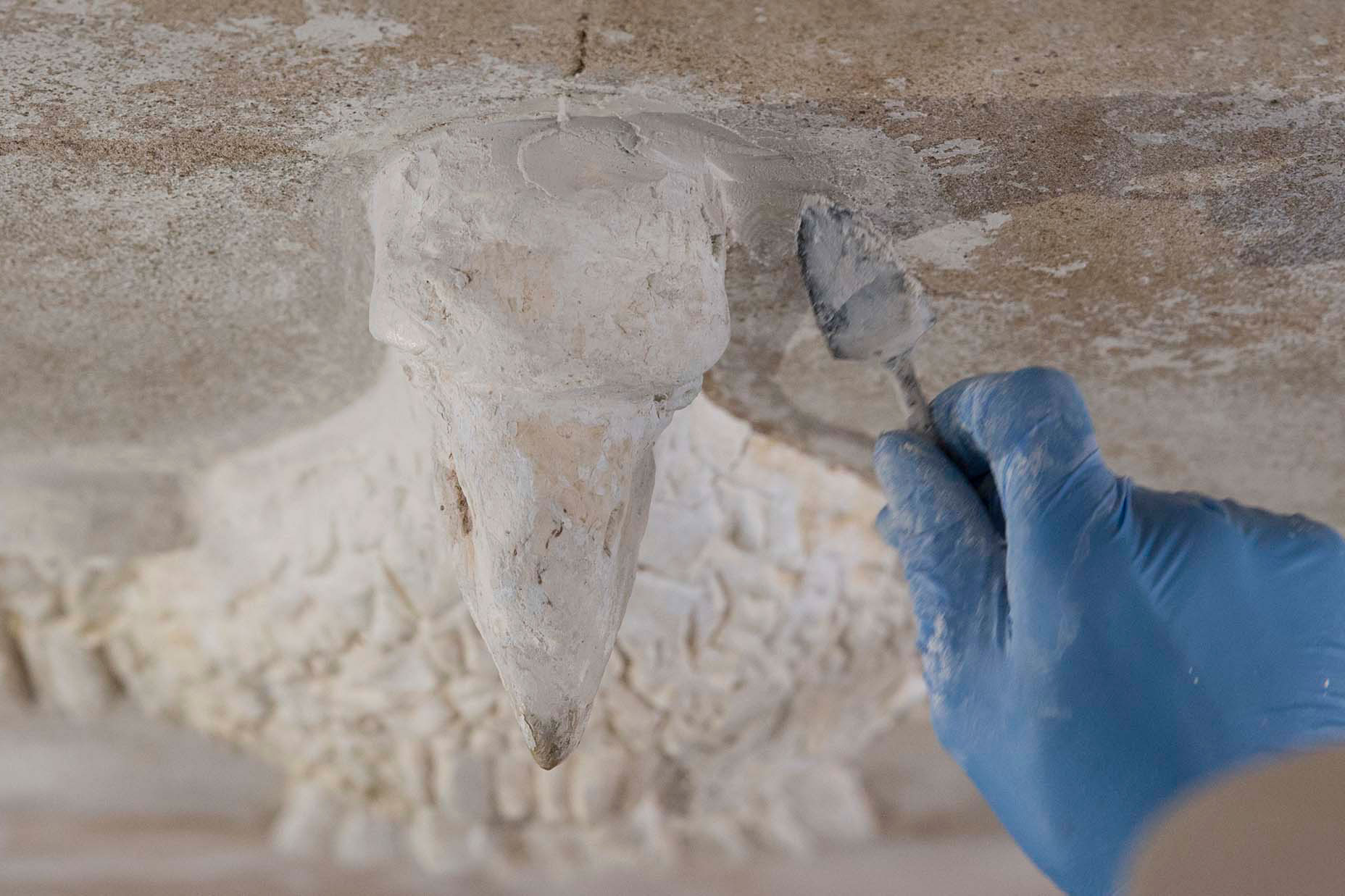 Hogg noted that eagles were a popular accent at the time, and that McKim, Mead & White’s Pennsylvania Station in New York City, completed in 1910, had eagles around the skylight. He said there is no record of who cast the eagle on the south portico and that the feature has “no artistic significance.”

When White originally commissioned the eagle, a lamp hung mid-air in the portico, extending from the eagle’s talons; Bird, the master plasterer, found a small hole near the bird’s feet where the lamp wire descended from the ceiling. Hogg said the lamp was a White touch and that there would have been no such light there in Jefferson’s design.

The eagle is about four inches thick, and Kutney believes the wings were cast separately, then held in place on a piece of burlap until the plaster cured. Then the whole thing was attached to the portico ceiling.

“We’re going to keep the original eagle and square around it and replace the rest of the ceiling,” Kutney said.

Bird, who works for John Canning and Company of Cheshire, Connecticut, injected a combination of chemicals into the eagle to harden the plaster, then secured it in place with screws. He said the plaster eagle was in good condition.

“It was preserve-able,” he said. “Being outside, I expected more deterioration, but it is always good to preserve something like this.”

He did need to replace and repair some elements of the wings.

“There were some pieces that had come down, so I used a molding plaster to make the wing tips, the end of the feathers,” he said.

Bird also repaired several cracks in the plaster that had been hidden under layers of paint that was stripped off as part of the renovation project.

Bird has been a professional plasterer for much of his life. He was born in Wexford, Ireland, and moved to London in 1985 to start an internship with a plasterer there. After three years, he moved to Chicago and completed his apprenticeship as a member of the Operative Plasterers’ and Cement Masons’ International Association. He works in ornamental plastering and plaster restoration, and is currently the Canning company’s director of plaster restoration.

Here Is What You Need to Know About the New Coronavirus Variant, Omicron END_OF_DOCUMENT_TOKEN_TO_BE_REPLACED

Fall Is in the Air on Grounds END_OF_DOCUMENT_TOKEN_TO_BE_REPLACED

Meet the Cats and Dogs Your CVC Donation Supports END_OF_DOCUMENT_TOKEN_TO_BE_REPLACED