Poet Paul Guest Shows ‘Because Everything Is Terrible,’ It’s a Good Time to Embrace Life

Some sweat it out with exercise, some talk to a therapist or to their god, some drown their difficulties in a mind-numbing elixir.

How does anyone deal with pain, loneliness, love, happiness, quirky occurrences, mysteries, nature’s fragile beauty or remorseless violence – all the myriad experiences of daily life as it stretches over years?

Some write poetry, like University of Virginia assistant professor of English Paul Guest, who wrestles with the questions and challenges of life many people confront. An award-winning writer, Guest has just published his fourth book of poems, “Because Everything Is Terrible,” and will read his work in a Virginia Festival of the Book event on Wednesday at noon in the UVA Bookstore. Two other poets, Remica Bingham-Risher and Susan Hankla, will also read.

Guest said he knew he wanted to be a writer before he knew what being a writer was. When he began writing his first poems in high school, he remembers something clicked on, connected inside his head, and he knew that’s what he wanted to do.

Guest has had his share of challenge and calamity, mostly stemming from an accident when he was 12. Riding a borrowed bicycle down a hill, he discovered the brakes didn’t work and that he could only stop by crashing. Upon impact, he was thrown over the handlebars. The result: a broken neck that left him paralyzed, and a life forever steered in a certain direction. 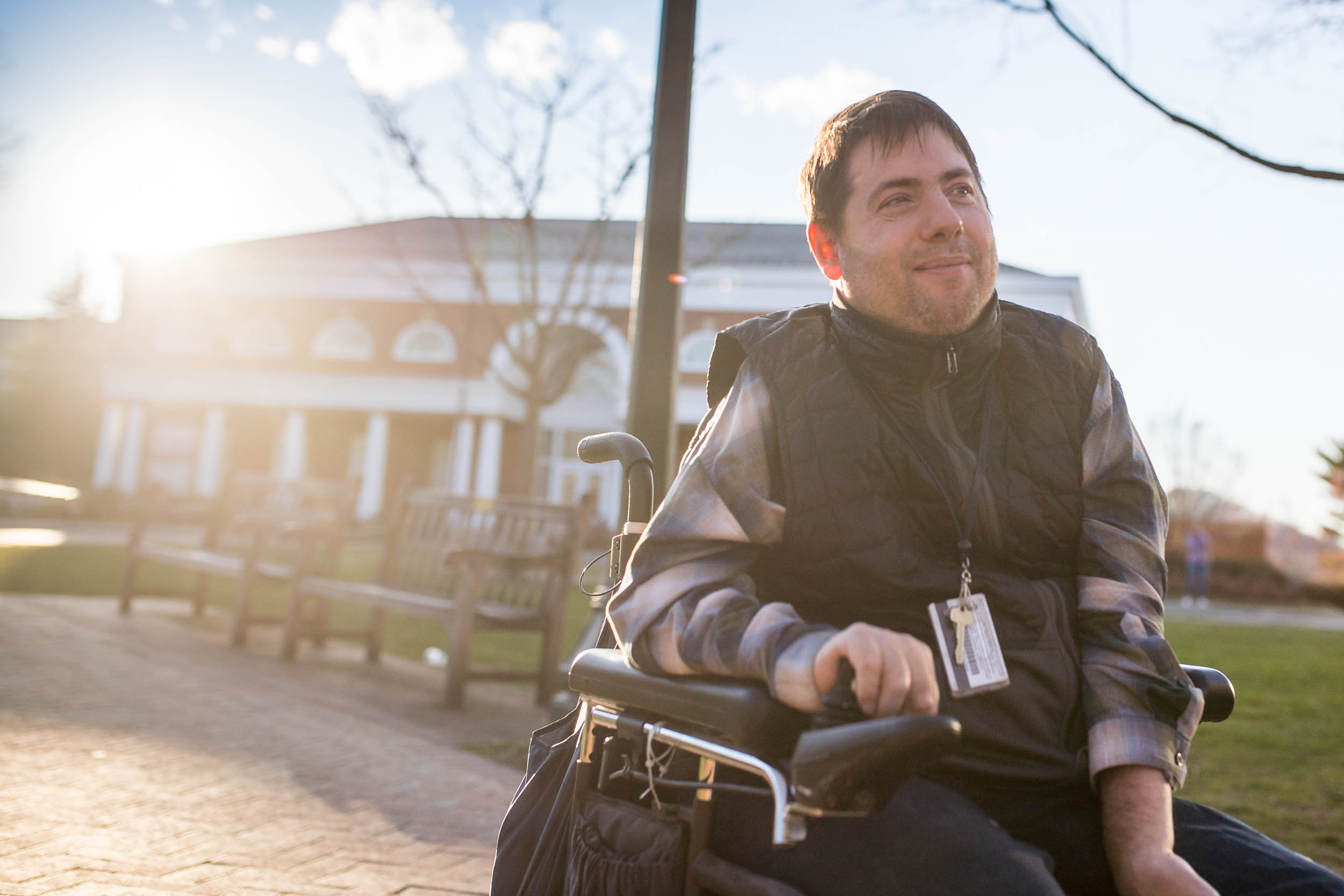 Years later, after publishing two books and winning the prestigious Whiting Award for Poetry, an agent would contact him about writing a memoir. He published “One More Theory About Happiness” in 2010, and it was selected for the Barnes & Noble “Discover Great New Writers” Program. Writing the memoir was another challenge, he said, and he worked on it for a couple of years.

Poetry feels more natural to him. In the midst of composing a poem, he’s not disabled, he said.

One of his creative writing teachers challenged him, however, about facing his disability in his poetry. Lucia Perillo taught Guest when he attended Southern Illinois University to pursue a Master of Fine Arts degree in the late 1990s. He said she told him, “You’ll always be known as the guy in a wheelchair who writes poems, so why not?” At first, he was resistant.

“I had adjusted. I wasn’t interested in that. I was bored with it,” he said.

He didn’t want to upset his ways of living in the world and of writing for the past six years. He knew from his reaction, though, that he should think about it. He came to understand that if what she was saying was true, if people were going to see him through that lens anyway, he could “take control of that narrative and embrace the subject matter.” He realized he had a unique opportunity to write about being quadriplegic, and that no one else would interpret things the way he would. It also gave him new things to write about.

At the time, Perillo had already been diagnosed with multiple sclerosis that was just beginning to affect her own mobility. Guest dedicated his new book to her; she died two years ago. 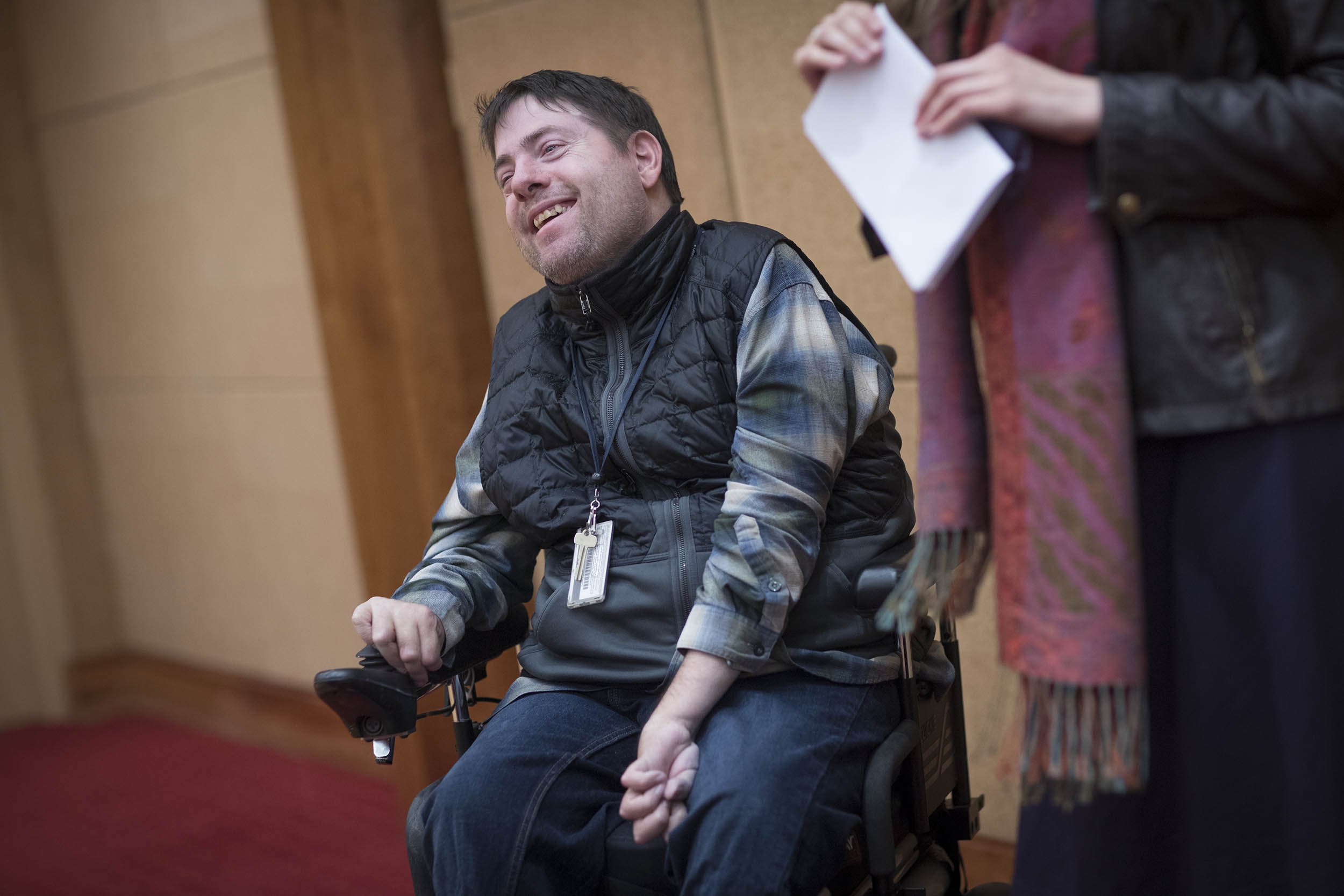 Most of the time, the title of a poem comes to him first, and then he works on writing the poem that flows from that title, said Guest, who uses a mouth stick to write on his computer. In both his poetry and prose, he displays a conversational style with a witty sense of humor, sometimes wry or slapstick or gently ironic, but without being too cynical. Some of his titles reflect his humor: “Because Everything Is Terrible” (see below), “Post-Factual Love Poem,” “Watched Pot Apostrophes” and “For When You Are Down About Various Ignominious Fates,” to name a few from the new book.

The poem and book title are a direct response to today’s world, he said. Knowing poetry can seem too dire or gray, besides using the different register of humor, he’ll often move from subject to subject quickly, not to get too bogged down in the negative.

He also pays attention to the narrative of a poem: “A story between an ‘I’ and a ‘you’ adds drama,” he said.

In his own teaching, Guest, who came to UVA in 2011 after teaching at Agnes Scott College in Decatur, Georgia, said he seeks to give students the same freedom to write what he feels – “to let them know they don’t need permission to write about something or in a certain way.” 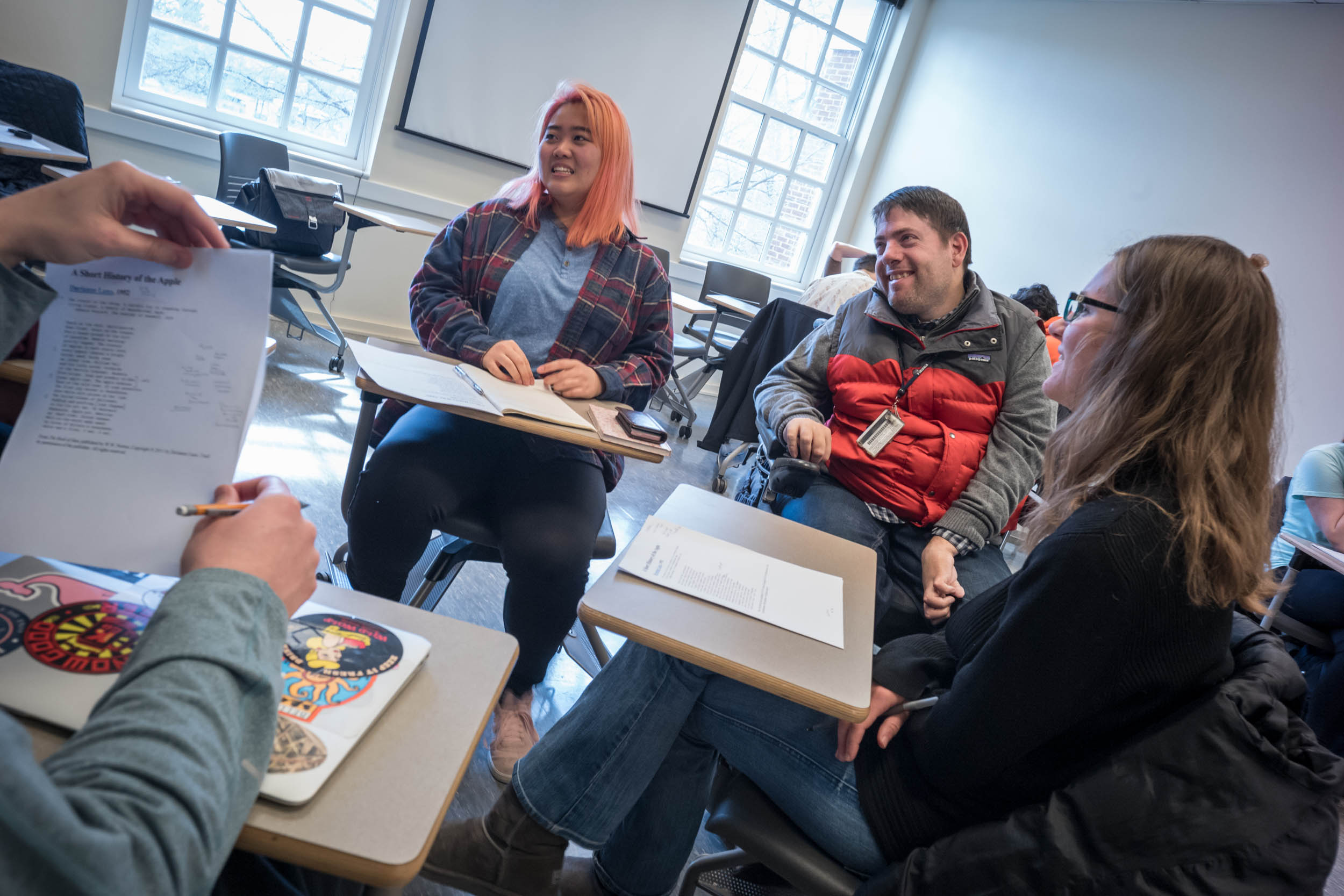 He teaches intermediate, advanced and graduate poetry writing workshops, and occasionally the undergraduate capstone course for the Area Program in Poetry Writing or a literature course, “Poetics of the Body.”

Caroline Hockenbury, a fourth-year student in the poetry program who has worked closely with Guest over the past two years, said, “I have never had a professor [with whom] I have felt so comfortable asking difficult questions. … He has been my most invaluable resource within the program because he offers pointed and constructive criticism while also making me feel confident in the aspects of my work which are strong.”

He also helped her with publishing tips, sending her a long list of publications which often feature up-and-coming writers. “He is thoughtful, conscientious and giving. Beyond this, he is unfailingly kind, witty, approachable and accepting,” Hockenbury said. “We truly need more hearts and minds like his in this world.” 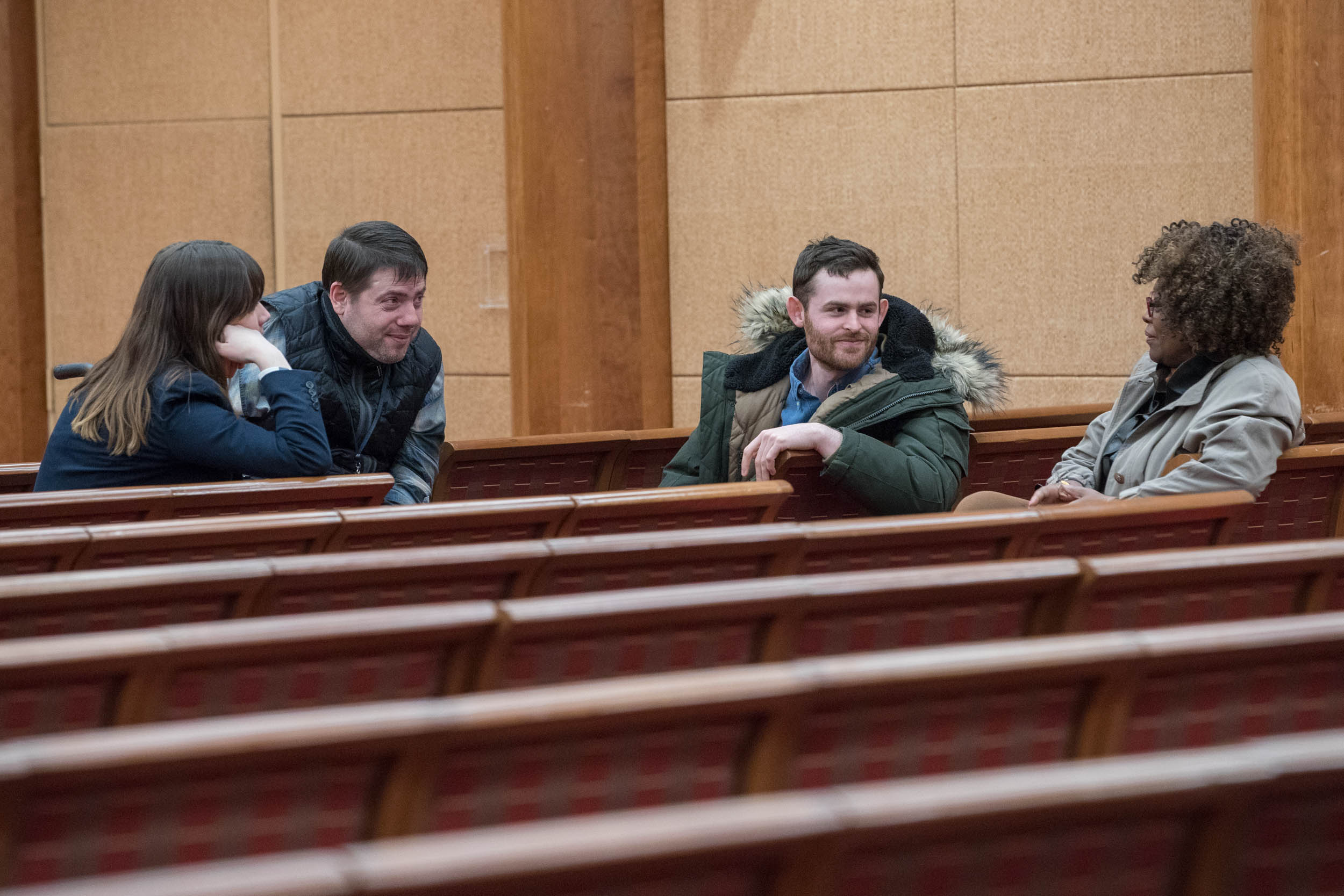 Guest said he appreciates his UVA students and the sense of character and history on Grounds. He has learned how to get around in his wheelchair, but does find the landscape challenging. For instance, although he can get to either end of the Lawn, there’s no way currently to drive a wheelchair from one end to the other within the Lawn. He’s a member of the Disability Advocacy and Action Committee, which works on improving access in a variety of ways, from physical mobility to educational opportunities in disability studies.

He recently posted an essay on the Disability@UVA blog, “On Being Stopped on the Street by Strangers.” After a recent incident in which a man stopped him, he writes:

“Disability is a very public thing, and in 31 years I have been stopped by strangers more often than I can remember. They usually want to know that their sons or daughters will not soon die; they want to know my secret. Or they want to share, to witness, to offer good news to me. They want me to be saved. Or, more rarely, they want to give me money. I’m not sure why, exactly.” 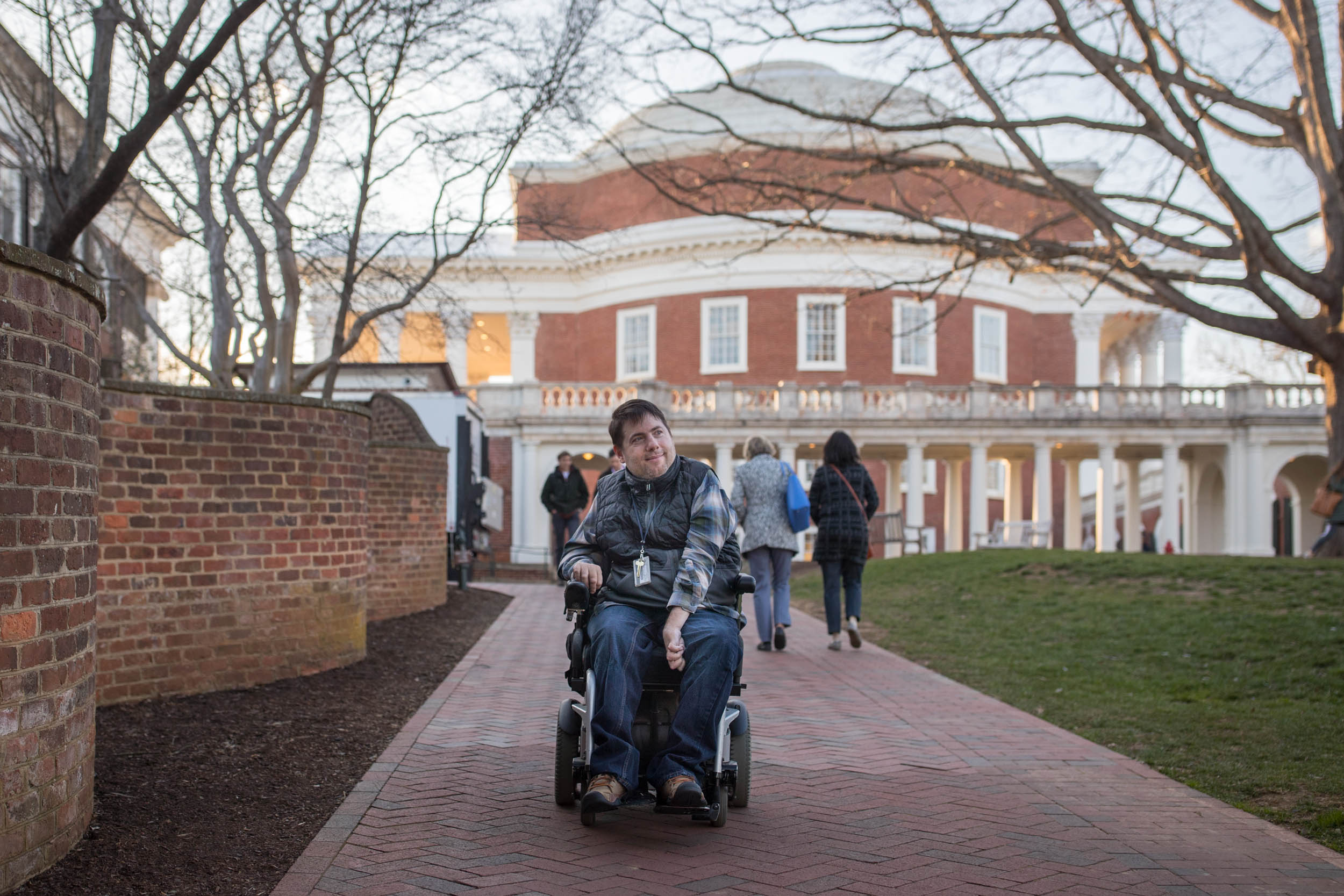 Hockenbury, who works at the independent WUVA radio station, recently interviewed Guest for a podcast of “Professors Are People, Too,” which “aims to develop a more personal connection between students and professors than that which is often achieved in the classroom,” she wrote in an email. “He spoke to us about the artwork of his new book (it features a baby doll wearing a gas mask! Ha!) and described the bike accident in his youth which resulted in his quadriplegia. Furthermore, my cohost and I learned of the various forms of discrimination and prejudice that people with disabilities experience on a regular basis.

“The experience was certainly perspective-shifting, largely because he doesn’t regularly talk about these matters openly in class unless asked.”

Even though the new book’s title poem is “Because Everything Is Terrible,” the speaker decides to list some of the strange and wonderful things that he comes across, and maintains a balancing act between these poles. Hence, “Because there is never / too much pleasure in this stupid world, / I’ll praise chocolate.”

Poet and writer Ada Limón praises the book, writing, “With vital, pulsating, elegiac poems that puncture the world with their tenderness and awful truths, Guest has once again proven he’s a brilliant poet raging both against and in defense of the world. Here are shiver-inducing poems that look steadily into our current destructive times and still manage to sing of love, desire, of something worth saving.”

Because Everything is Terrible

Or feels endlessly ruinous, at least,
I’ll praise the trivial. I’ll praise
in winter the half-foot of height
lost by the Eiffel Tower. I’ll praise
aspirin, which once was made
from the boiled bark of the willow tree.
Because there is never
too much pleasure in this stupid world,
I’ll praise chocolate. Decent
sex. Out-of-body experiences.
New languages. I’ll praise
Wayne Newton because this is perverse.
Tumbling through cold space
is an asteroid filled with murder.
Sealed up in amber, pressed into stone,
are bones of the long dead
super-lizards I loved when I was a boy
and dying was not a thing
anybody ever did. I praise
in this instant my sprained ankle,
my sore throat, my face
which needs to be shaved.
I love you, all. I love the shadows
inking the window to my right.
Collection agent, what
do I owe you? I don’t have it to give you,
but I can imagine a life
of obscene wealth. I can imagine
going so fast that time
slows down. Over there is
the wooden roller coaster
that is causing all this screaming.
I am screaming. I’m thinking
of my body. I am falling
through sleep into hateful Thursday.
Tonight: I’ll praise whatever
is at hand. A new year. The apocalypse.

What Is the ‘4th Side’? END_OF_DOCUMENT_TOKEN_TO_BE_REPLACED