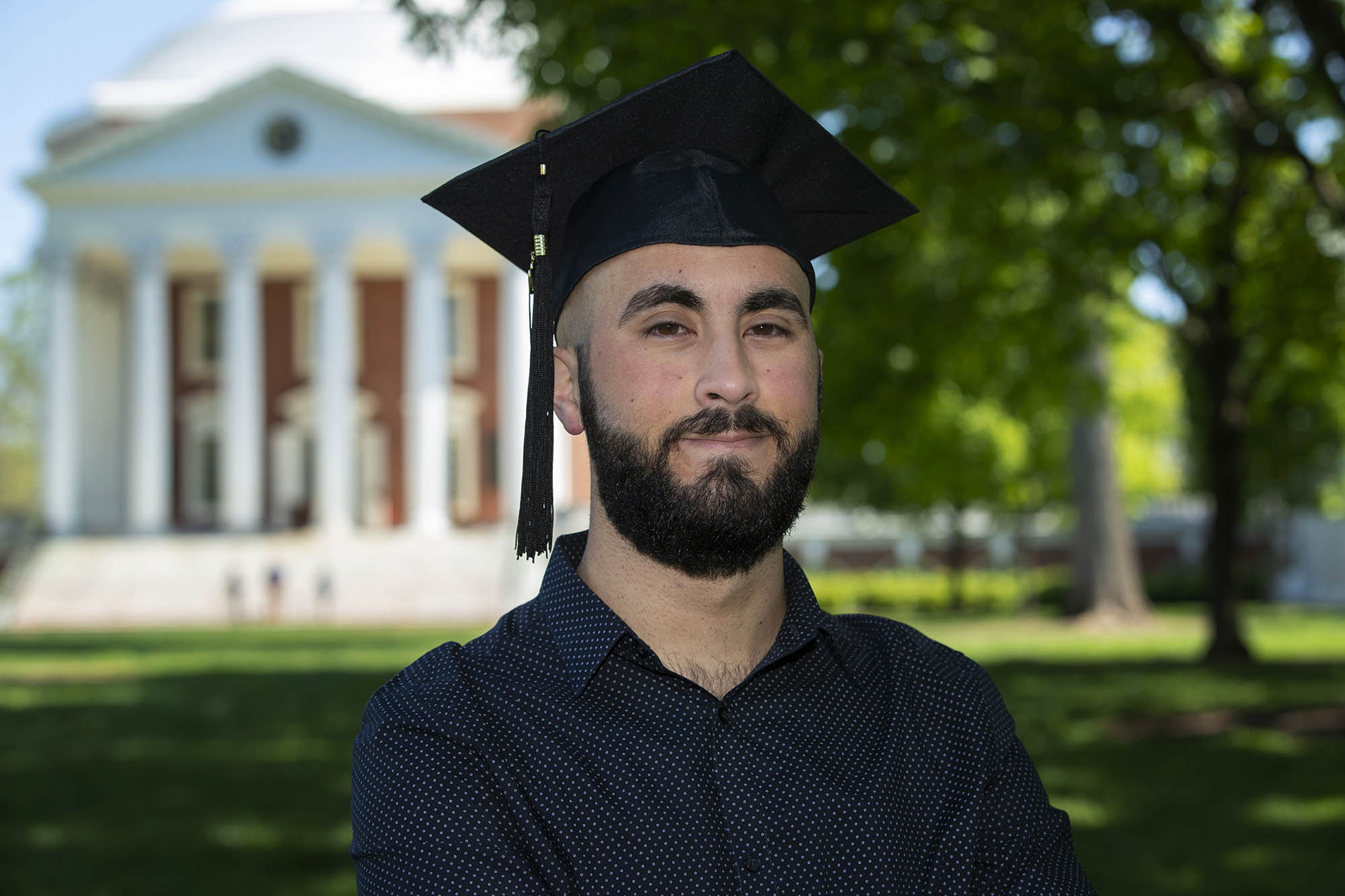 Omar Elhaj’s time at the University of Virginia is punctuated by highs and lows, weaving together events to create a span of his life he says he will never forget.

The highs include an especially tight, or as he put it, “phenomenal” hall in his first-year dorm, and the UVA’s men’s basketball team national championship during his third year.

On the other side of the ledger, he and his classmates also had to weather the summer of 2017, when white supremacists marched on Grounds and wreaked havoc on the streets of Charlottesville. And of course, there was COVID-19.

UVA’s Class of 2020 has seen a lot in four years. Elhaj, the president of the Fourth-Year Trustees, shared some of his fondest memories and greatest challenges with UVA Today as he prepared to participate in Saturday’s virtual celebration and conferral of degrees, which will mark the end of his undergraduate career at UVA.

Q. As you look back on your time at UVA, can you share some formative memories from each of your four years?

A. So my first year, I think the first thing that comes to mind are just literally the countless nights with my hall. I fortunately had a phenomenal hall. All of them became my closest friends, and I can think of a bunch of nights where we all just wanted to hang out with each other and just spend time with one another. We would play video games or just talk about issues like the political climate in 2016.

I think what made my second year so great was just the challenges that it had – especially the academic challenges. Getting into my majors [of political and social thought and economics] and being elected again to be president of my class [Note: Elhaj has been elected president of his class all four years] and just doing well in classes and in my activities. For example, the Class of 2020 put together a second-year dinner series, where we were able to engage professors to talk about really, really difficult issues from life to how to reconcile with the events of Aug. 11th and 12th. Just the idea of making it through second year and succeeding – not only surviving, but thriving.

I was a residence adviser my third year, and that came with its own challenges because I was no longer living with the friends I had lived before. But at the end of the day, I got 22 new friends on my hall. My favorite thing about third year, in terms of memory? I would have to say the national championship. That was an extraordinary night, us winning the national championship and just that collective celebration in Charlottesville. It was just so gut-wrenching and I think it will be something I will always remember.

I think fourth year is definitely a weird year. I think the biggest thing that I enjoyed this year was just being able to enjoy the “lasts.” Lighting of the Lawn was my favorite, because I could savor it more. Likewise with Trick or Treating on the Lawn. The first day of classes, even something as mundane as that. Just celebrating those “lasts” was really cool.

Q. You served on the special committee President Ryan appointed to offer suggestions for Final Exercises for the Class of 2020. Why did you want to serve, and what did you hope to accomplish?

A. The night when President Ryan sent out the e-mail saying that graduation wasn’t going to go as planned, that they’re going to find creative solutions, I basically reached out to people on his staff and was wondering how one could get involved with finding these creative solutions. I wanted to serve because I just saw the sadness from a lot of my peers on social media.

I think my biggest goal was providing a sense of normalcy. To really push to give the class the same exact experience as much as possible – the degree ceremonies; walking the Lawn; if possible, the Friday activities like Valediction and the class party and things like that.

Q. What were the last days of classes like for you?

A. In my very last class, Mike Lenox, one of my professors, said something that really resonated with me. He said to not let this final chapter define our UVA experience. Missing one last class, one last coffee chat, one last night out doesn’t detract from an experience that was surely full of these events. As we logged off from that class, the last of my undergraduate experience, I sat with that comment and acknowledged the classes, friends and experiences that I did have.

Q. How have you been saying goodbye to your friends?

A. Not being able to see my friends in-person hasn't stopped me from spending time with them. There are few days where I’m not Zooming at least one of my friends. That way I never have to say goodbye! I'm optimistic about being able to see everyone during our rescheduled graduation in October (or next spring, whichever option is chosen).

Q. What is next for you?

A. I’m currently in between two options, one that would keep me here in Charlottesville doing international political research, [and] the other [that] would put me up in Washington, D.C., working on national security.

Q. What will you miss most about UVA?

A. I think it’s definitely the people. I think as beautiful as it is, I think what makes UVA so amazing is the people I got to share it with. Not only my peers and friends and classmates, but people like faculty and the administration that I got to work with. It truly is a community of amazing individuals who are so passionate about so many things. As cliché as it sounds, I’ve just never been in an environment where that was the case. I’m just very, very thankful for it, for just being able to have four years with those people. That's probably my favorite thing.

What Is the ‘4th Side’? END_OF_DOCUMENT_TOKEN_TO_BE_REPLACED