President Ryan Lays Out His Vision for the University’s Future

President Ryan Lays Out His Vision for the University’s Future 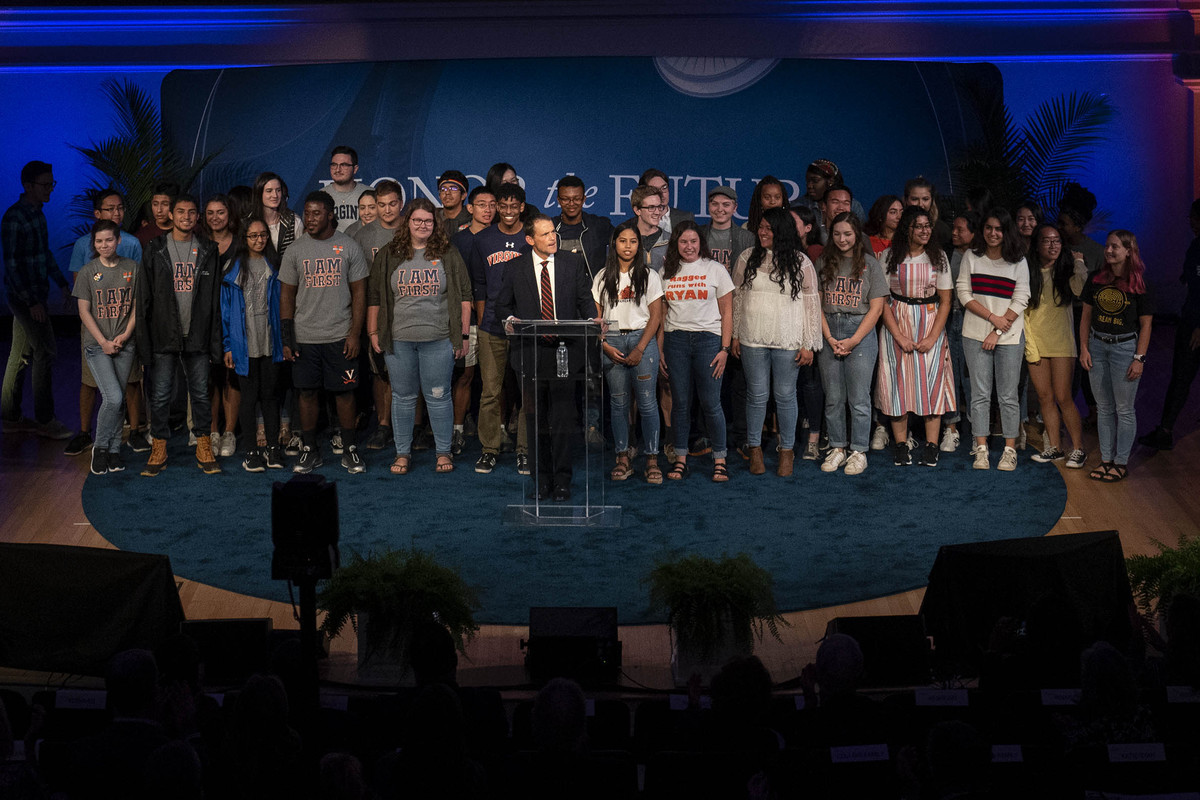 On Saturday, University of Virginia President Jim Ryan took the stage at Old Cabell Hall to share his hopes for the university that he and so many others call home.

Ryan’s address was part of a full weekend of events marking the launch of UVA’s “Honor of the Future” campaign, which aims to help the University continue its tradition of excellence and meet its aspiration to become the best public university in the country.

On Saturday, Ryan laid out that vision in the form of a letter to the bright future that he and everyone in the University community hopes for.

“Dear Ms. Future,” Ryan began. “I write, with deference and hope, to introduce myself and the rather large community of which I am immensely fortunate to be a part.” 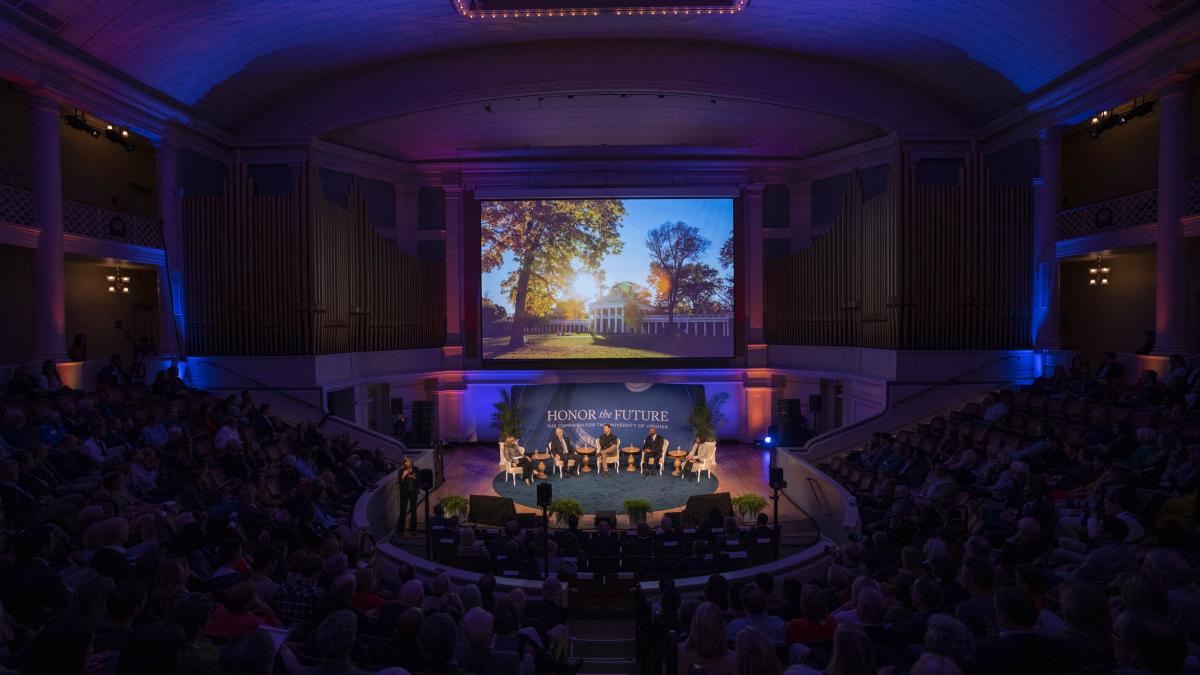 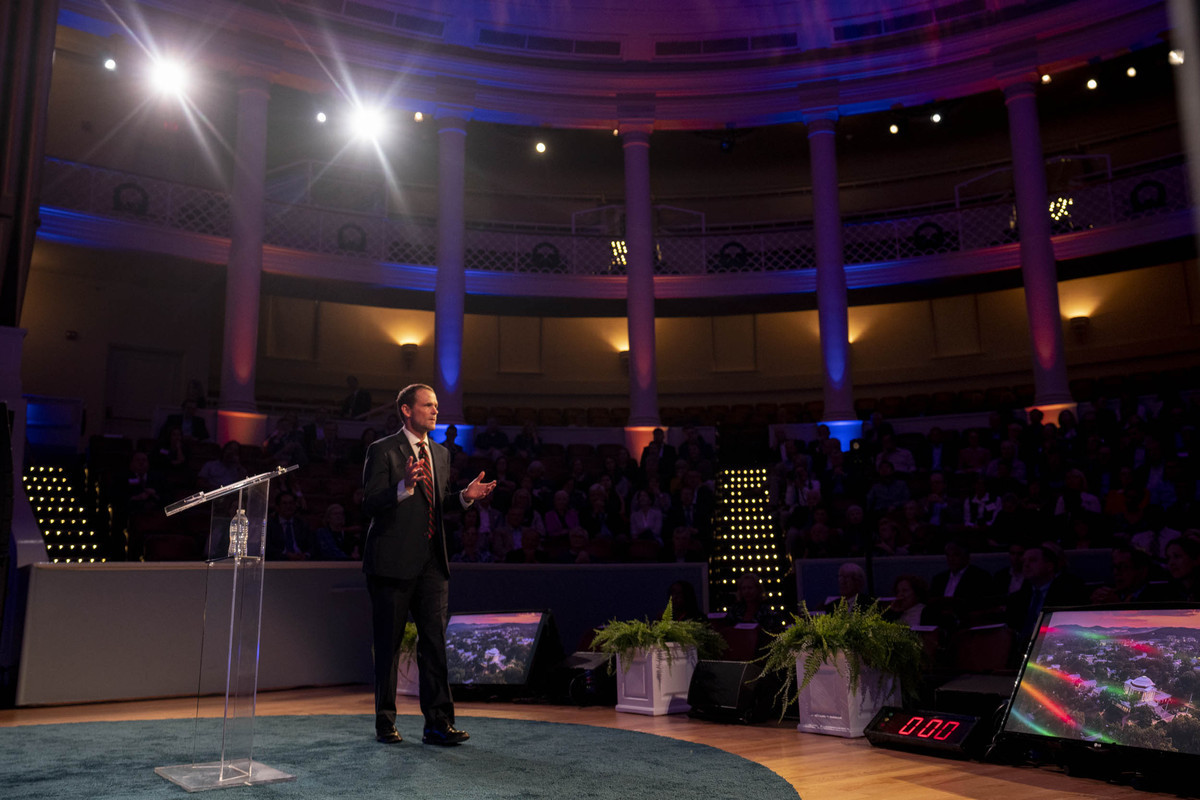 UVA President Jim Ryan took the stage after an alumni panel to share his letter to the future. (Photo by Sanjay Suchak, University Communications)

Ryan reflected on UVA’s growth over 200 years – from eight small schools to a dozen, including a brand-new School of Data Science, and the UVA College at Wise; from eight professors and 68 students to more than 3,000 faculty members and 24,000-plus students. From a laboratory in the basement of the Rotunda, Ryan noted, UVA now has more than 1.5 million square feet of lab and studio space, and generated more than $400 million in sponsored research awards last year.

He also noted the contradictions in UVA’s founding and founder – “a place designed to liberate the mind was constructed and served by those denied their own liberation” – and recounted modern efforts to learn more about the enslaved laborers who built UVA and to honor their contributions and sufferings. It took a while, Ryan said, but UVA opened its doors to women and African Americans and today welcomes students of all backgrounds.

“Over the years, we have demonstrated time and again our capacity to change for the better, and change we have,” he said.

“Yet despite these vast changes, we have remained committed to our founding ideals of preparing citizen-leaders and pursuing the truth wherever it might lead. Indeed, in some ways, our university today represents the unforeseen and perhaps unimaginable fulfillment of Jefferson’s core ideas about the purpose and promise of a public university. We have taken his ideas, and we have run with them.” 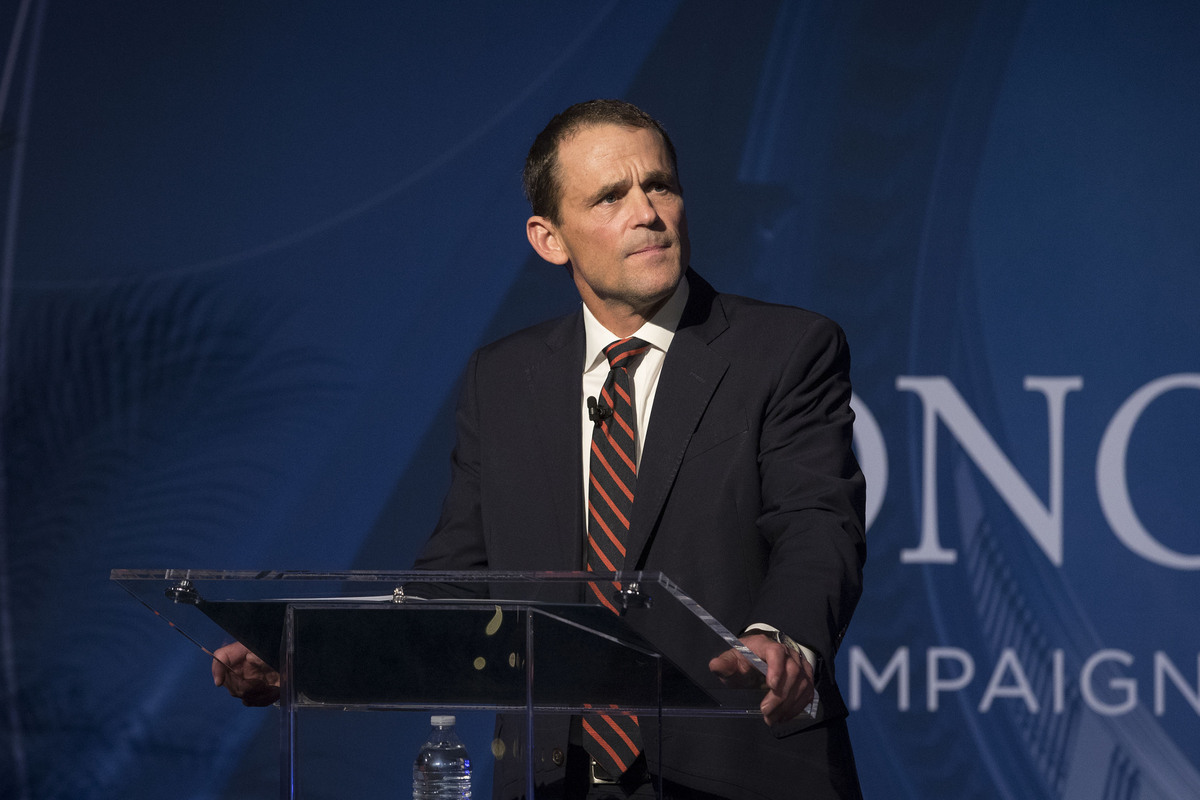 Ryan said UVA could represent the best in higher education by working to be both “great and good.” (Photo by Dan Addison, University Communications)

As a montage of photos past and present scrolled behind him, Ryan told “Ms. Future” about today’s UVA.

“We are explorers of everything from galaxies to microbiomes. We are caregivers. We are discoverers. We are adventurers. We are champions. We are thinkers. We are doers. We are artists, athletes and musicians,” Ryan said. “We have been to outer space. We have been to Antarctica. We have scaled mountains. We have explored the depths of the sea. We are resilient. We are pathbreakers. We stand on the shoulders of those who came before us.”

With the country at a critical moment for higher education, amid worries about affordability, income inequality and political polarization, Ryan’s main hope for the future, he said, is that “we will be the ones of whom it is said: They are not just great. They are also good. 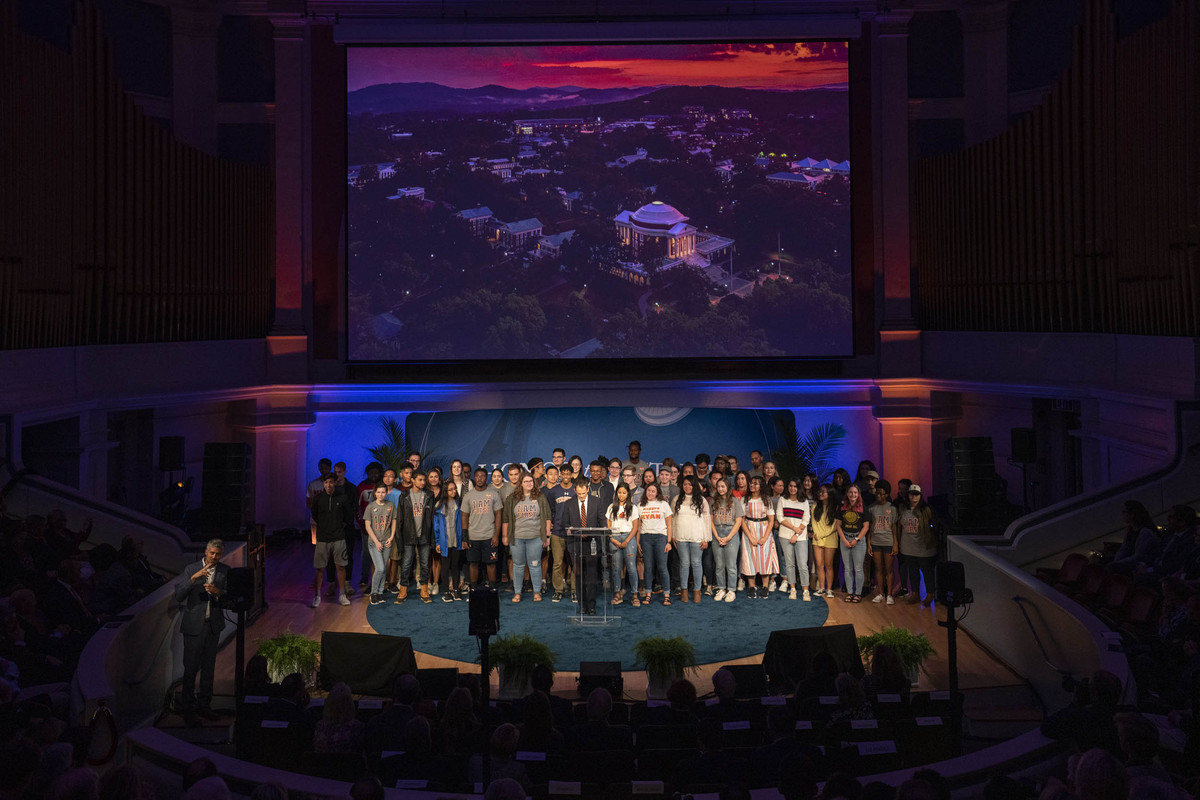 Ryan closed his speech joined by current students on stage, to a round of applause from the audience. (Photo by Sanjay Suchak, University Communications)

Joined by dozens of students filing onto and filling the Old Cabell Hall stage, Ryan closed his address with a simple hope.

“I hope, Ms. Future – we hope – that you will be everything we imagine you to be.” 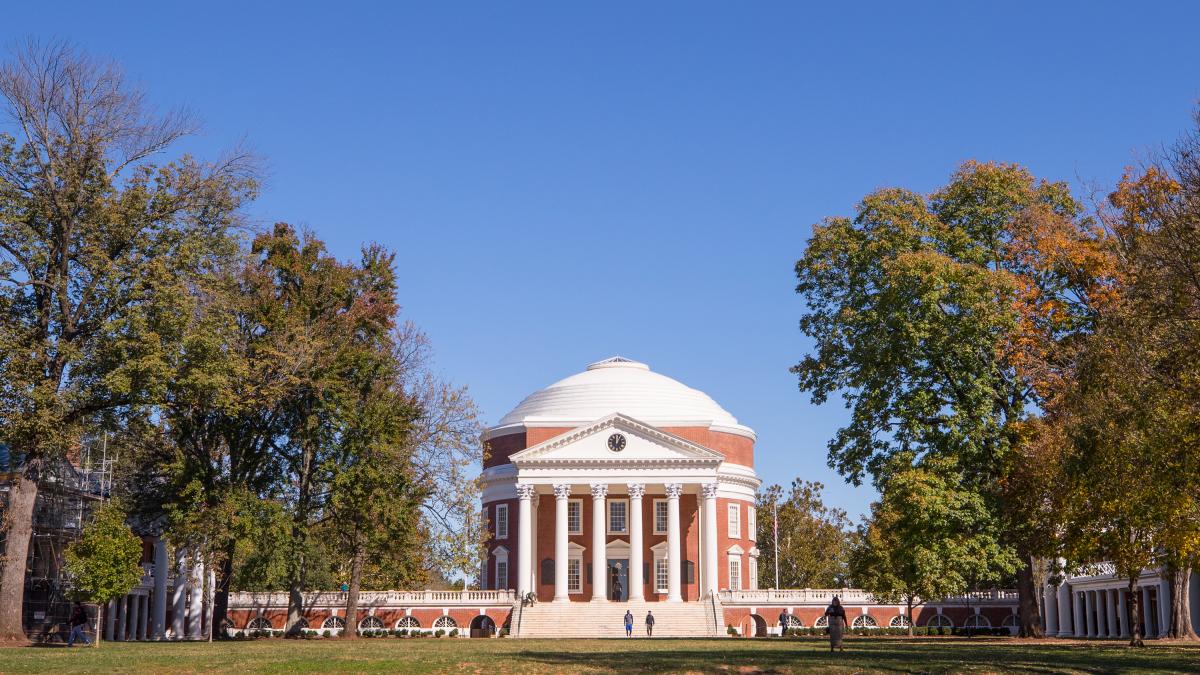 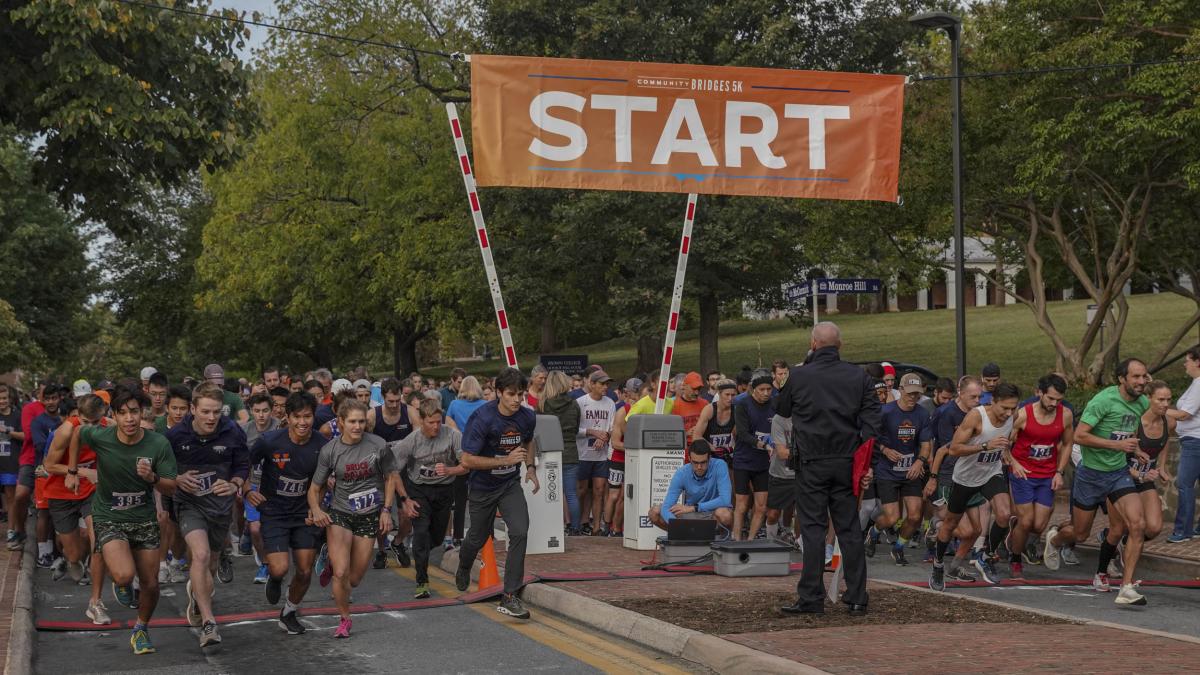 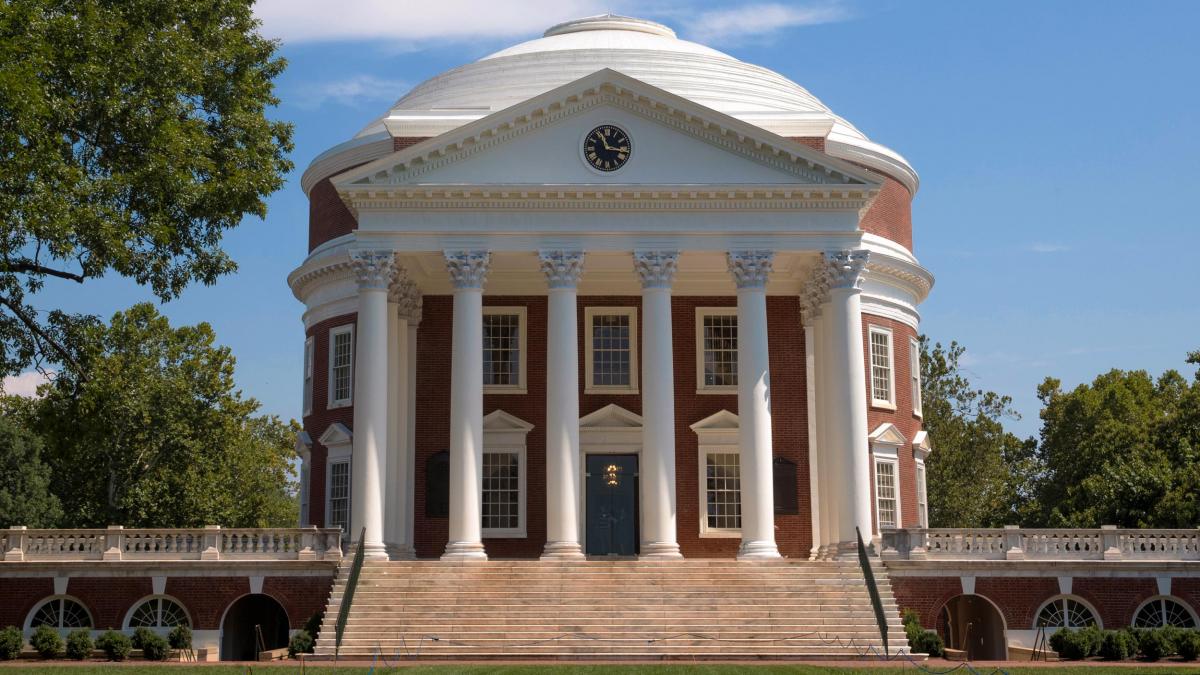 Board Approves ‘Great and Good’ Strategic Plan for University of Virginia