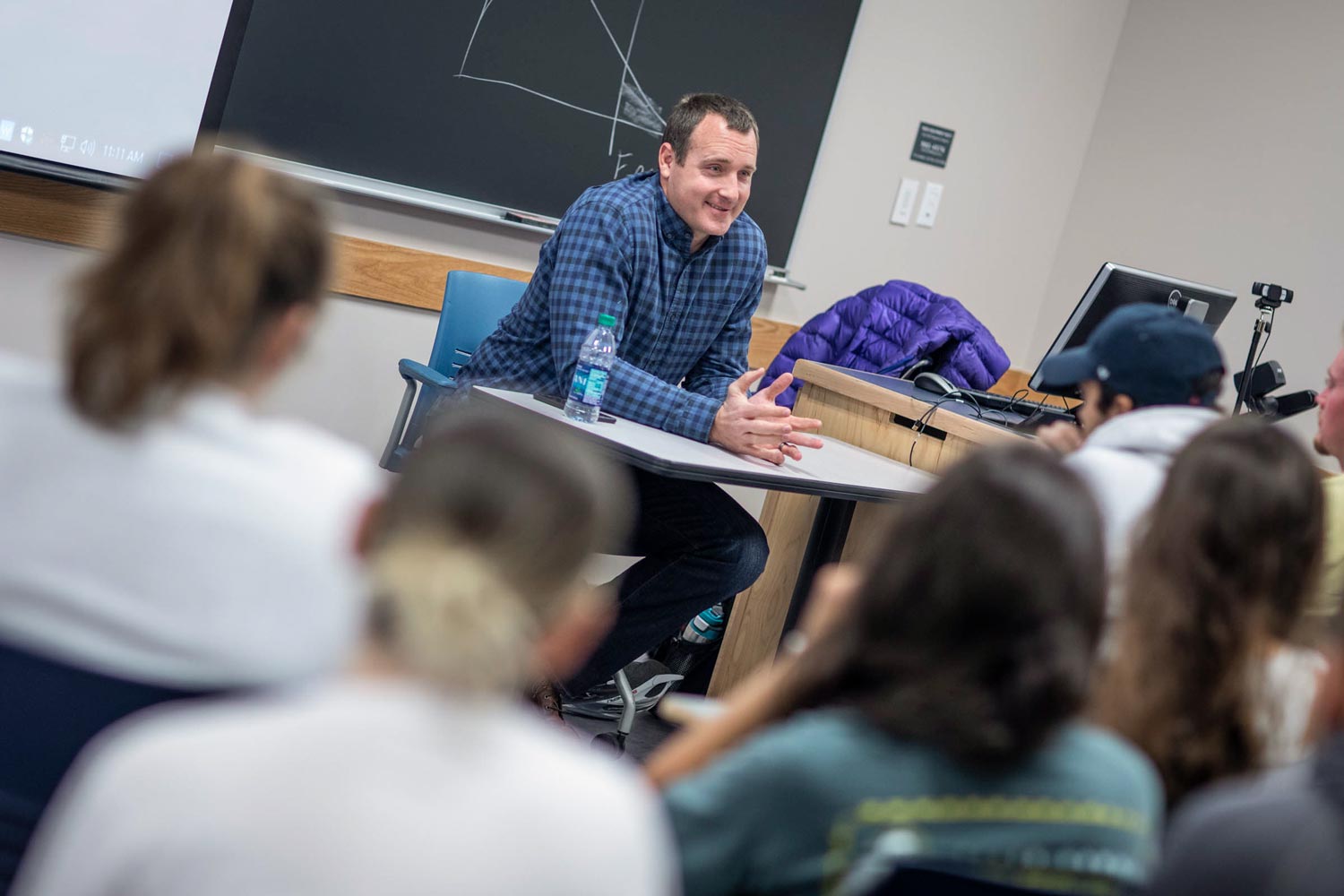 During an illustrious college and professional football career, Heath Miller shied away from the spotlight. The soft-spoken tight end preferred to let his play do his talking, which, in a blue-collar city like Pittsburgh, was very much appreciated.

Perhaps that is why, nearly three years after he retired, fans still intone “Heeeeeath!” whenever a Steeler tight end catches the ball.

But on Tuesday morning, the former University of Virginia star – who now makes his home in the Charlottesville area – was in an unexpected place: in front of a classroom filled with aspiring sports journalists at his alma mater.

Sitting at a desk in the front of the Ruffner Hall classroom, Miller answered 40 minutes’ worth of questions that may have made the annual pre-Super Bowl media day look like a walk in the park.

“The purpose of them being here is to get the perspective of a professional athlete, because they’re trying to learn how to cover sports and how to talk to athletes,” said Clay, who worked as a writer, reporter and producer for ESPN prior to working at UVA.

“But I remind them all the time that an interview should feel like a conversation.”

By the looks of things, the 24 students (mostly third- and fourth-year students) are pretty quick studies.

Next week, Clay will break down the session with her students and talk about what they asked – and other things they should have.

“Obviously this is not fully replicating a locker room, but for a lot of them this is the closest they’ll get to interviewing a professional athlete,” she said, “for now.”

Here is a condensed version of their interview.

Q. How did your time playing at UVA impact your NFL career and then your time after your career?

A. [Former Cavalier] Coach [Al] Groh did a really good job of teaching me things that I’ve carried into my life today – how to deal with adversity, how to be a professional and how to handle your responsibilities like an adult. I feel like I grew up a lot here. I think that period of my life was where I had my most growth as a person.

Q. Have you considered following in the footsteps of another great tight end in (former Dallas Cowboy and current ESPN analyst) Jason Witten and getting into broadcasting?

A. Uh, no. … That’s very daunting (smiling). I have always been a little uncomfortable in interviews and with media, so I don’t know if I would fit that. I still have a great passion for football, but I don’t know how that translates into my life right now.

I have four kids and they consume a lot of time and energy. I‘ll keep my ears open about how I can feed that football passion without it consuming my life again.

Q. Was it a tough decision for you to switch from quarterback [in high school] to tight end when you got here?

A. Not really, I don’t think. When I came in, there was a quarterback competition between Bryson Spinner and Matt Schaub, and the media was always asking questions and everything they did was being dissected. And I came in with a quarterback by the name of Marques Hagans, who is now a coach here. I saw him throw the ball a couple times and was like, “Well I can’t throw the ball like that.”

Q. What are your thoughts on the current player safety protocol in the NFL?

A. I think it’s definitely good for quarterbacks (smiling). But safety is a hot topic and rightfully so. It’s a touchy situation. I don’t know what the answer is, but I think they are a little overboard with protecting quarterbacks.

Q. With CTE (chronic traumatic encephalopathy) becoming a really prominent issue, how do you feel about your kids playing football?

A. Right now, they play a lot of different sports. My oldest son really loves football, [despite] pushing him to a lot of different sports. He plays flag football now, so he’ll do that for a long time and then hopefully decide he loves something else better – although when we’ve had the conversation, he’s said, “Dad, it’s in my blood.” I said, “Well your mom played soccer, so that’s in your blood, too.” [Editor’s note: Miller’s wife, the former Katie Bunch, played soccer at UVA.]

I’m conflicted, because football did so much for me in my life and taught me so much about myself that I’m not sure I would have learned in other sports or in other walks of life. To me, that’s what makes the sport so special. I’d like for him to learn those lessons, but maybe there’s a better route. But we’ll see.

Q. From your interactions with the media and sports journalists, what advice would you have for journalists?

A. Don’t be afraid to approach guys and just be normal with guys. … Don’t be in awe of someone.

Q. How do you like what [UVA] coach [Bronco] Mendenhall is doing with the program?

A. I’m excited. I’m grateful that everybody has had patience and I hope they continue to have patience, because it takes a while to turn a program around.

I like a lot of the values he puts into the program. It’s been fun for me to be back and see some practices and to hopefully see the program evolve into what we all want it to be.

A Year We Will Never Forget: 2019-20 in Review END_OF_DOCUMENT_TOKEN_TO_BE_REPLACED

‘What Will You Carry With You?’ Remarks From UVA President Jim Ryan END_OF_DOCUMENT_TOKEN_TO_BE_REPLACED