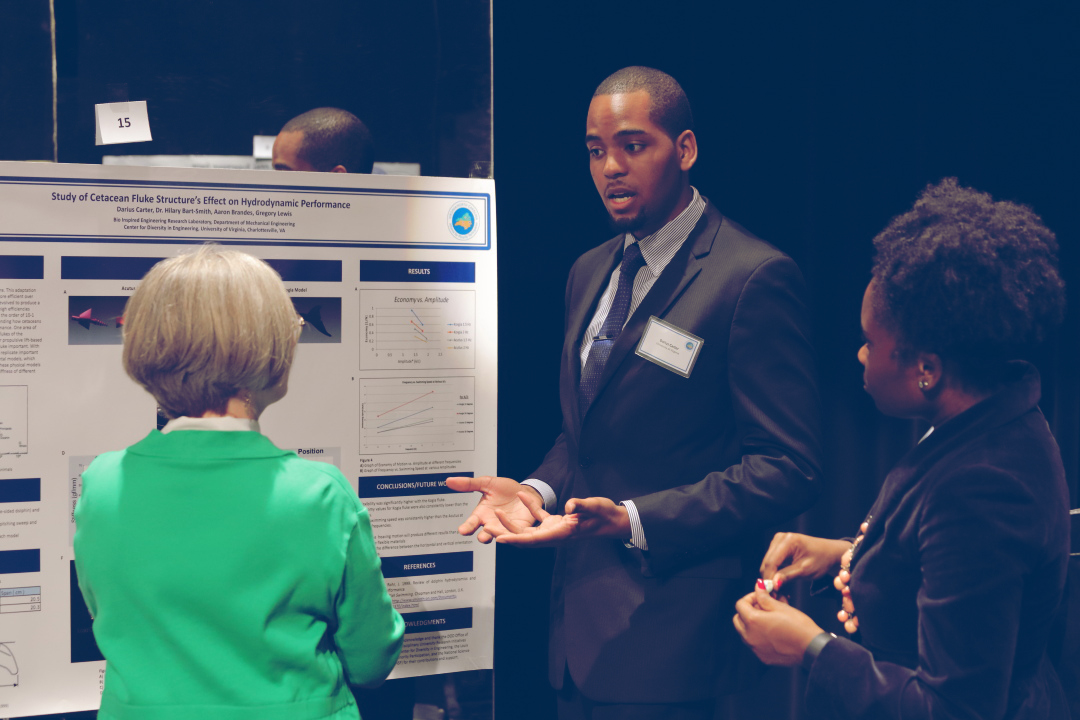 When Tim Raines found he didn’t like the sight of blood and wasn’t crazy about the fast pace of hospitals, he knew medical school wasn’t for him.

Now a doctoral candidate at the University of Virginia, he discovered his love of research through participation in the Virginia-North Carolina Alliance, part of a national college program designed to increase minority representation in science, technology, engineering and math – the “STEM” disciplines.

“It is because of this program that I am on the path to completing my Ph.D. and pursing a career in science administration, where I can help and inspire underrepresented minority students to pursue careers in the sciences,” said Raines, who is in the Department of Microbiology, Immunology and Cancer Biology.

Since 2007, the VA-NC Alliance has nurtured remarkable growth in underrepresented STEM enrollment. Enrollment in the alliance grew from 3,469 students in year one to 6,340 in 2015, representing an increase of 83 percent. The number of STEM degrees underrepresented students earned climbed 127 percent to 6,000 in these eight years.

Similarly, Racheida Lewis, who earned her master’s degree in electrical engineering from UVA, tried a couple of internships at engineering firms and realized she didn’t want to spend most of her professional time as an engineer in an office. She, too, is on track to join academia in the near future, thanks to her experience with the VA-NC Alliance. Seeing the low numbers of underrepresented minorities in STEM professions, she decided to pursue her Ph.D. – she’s at Virginia Tech – to become a professor teaching engineering and encouraging other college students to go into these fields.

Since 2007, the VA-NC Alliance has nurtured remarkable growth in underrepresented STEM enrollment, said Dr. Marcus Martin, UVA’s vice president and chief officer for diversity and equity, who heads the alliance’s management team and oversees it with Carolyn Vallas, director of the UVA School of Engineering and Applied Science’s Center for Diversity in Engineering. Enrollment in the alliance grew from 3,469 students in year one to 6,340 in 2015, representing an increase of 83 percent. The number of STEM degrees underrepresented students earned climbed 127 percent to 6,000 in these eight years.

Obtaining a VA-NC Alliance fellowship in 2005 gave Raines an opportunity to conduct independent research as an undergraduate at North Carolina A&T State University. “This program was also helpful because it provided me with an intellectual curiosity for research and possible career interest as a scientist instead of a medical doctor,” he said. When he presented his research at the national LSAMP conference in May 2006, he received a confidence-booster: he won a first-place award for his poster presentation in biology.

Raines is currently researching how ovarian cancer spreads in UVA microbiologist Jill Slack-Davis’ laboratory. “The research that I conduct looks at understanding how the normal cells within the body are altered to allow the ovarian cancer cells to attach, invade and metastasize to other regions of the body,” he said.

Both he and Lewis say that, along with research, the mentoring and networking opportunities offered through the alliance’s programs have made a big difference in helping them find their academic paths.

Undergraduates in the program echo their experiences.

Darius Carter, a third-year mechanical engineering major at UVA, attended the national LSAMP Research Symposium in National Harbor, Maryland in February, along with scholars from six other VA-NC Alliance schools. “I was allowed the opportunity to present my research at the national LSAMP conference and expand my network to nationwide,” said Carter, a peer mentor with the Center for Diversity in Engineering.

Carter was among approximately 700 attendees from across the country who participated in the 25th anniversary symposium, which also honored the program’s namesake, the late Congressman Louis Stokes; he presented his research on “Study of Cetacean Fluke Structure’s Effect on Hydrodynamic Performance.” Currently president of UVA’s chapter of the National Society of Black Engineers, he reprised his poster presentation and won third place for his research at the VA-NC Alliance conference, held last week at PVCC.

“The VA-NC alliance has affected me a big way,” Carter said after the conference. “Last spring in 2015, I went to the regional conference [where] I was exposed to the field of research and was able to network with other students and faculty across the alliance. After that, during the summer I was funded through the alliance to conduct research here at UVA. During the summer research, I learned presenting skills, technical report writing and how to work on research in a lab.”

Added Carter, who plans to go to graduate school in mechanical engineering, “This life-changing experience got me exposure to many different career and research paths, as well as motivated to finish my undergraduate studies strong.”

A Year We Will Never Forget: 2019-20 in Review END_OF_DOCUMENT_TOKEN_TO_BE_REPLACED

‘What Will You Carry With You?’ Remarks From UVA President Jim Ryan END_OF_DOCUMENT_TOKEN_TO_BE_REPLACED