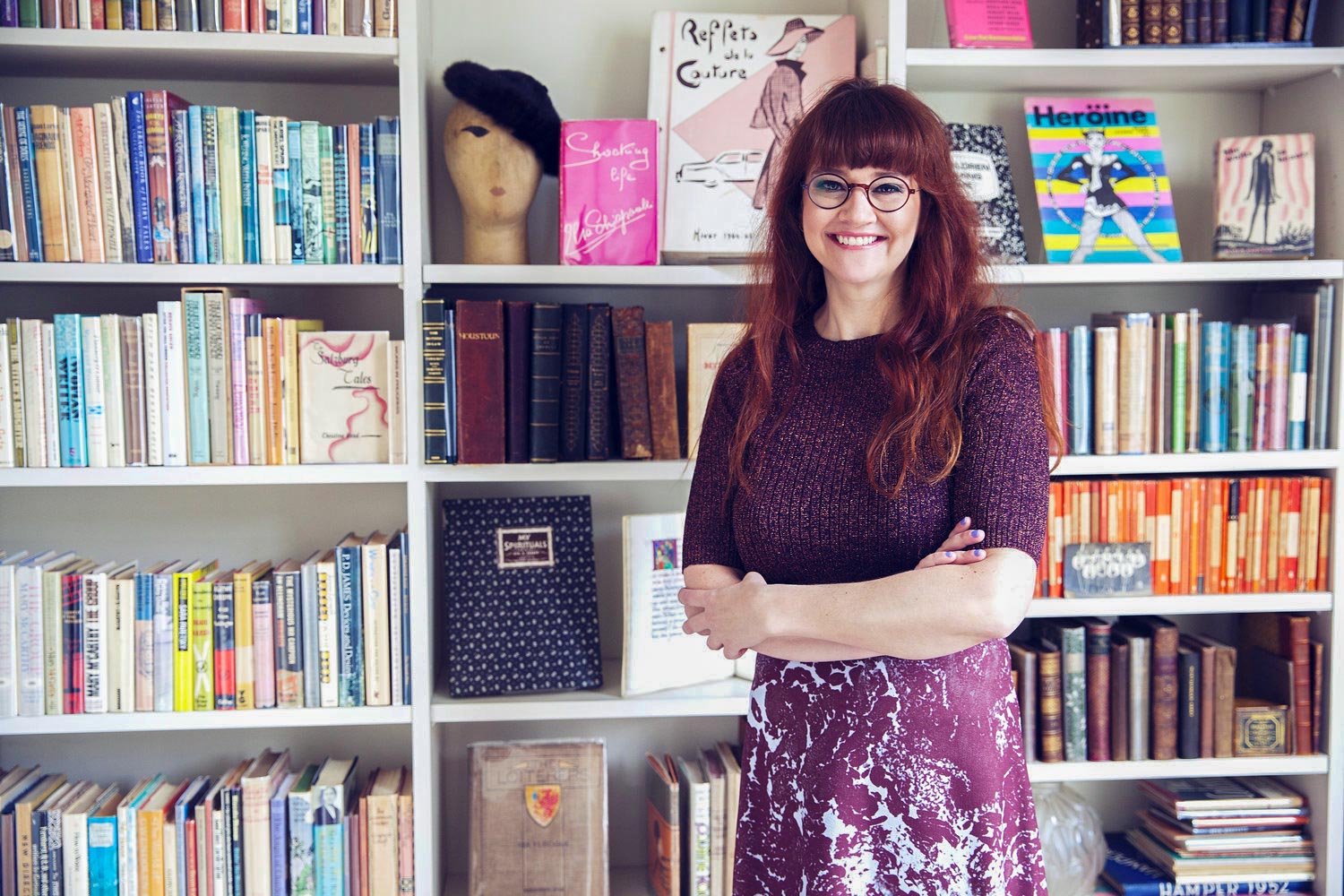 Writer A.N. Devers has loved books for as long as she can remember and was particularly captivated by the literary lore she found at UVA. Now, she is a rare book dealer making a mark with a new shop focused on female authors. (Photo by Jo Emmerson)

Allison Devers still remembers wandering past Edgar Allan Poe’s room on the West Range at the University of Virginia, lingering at its door in between classes, mesmerized by the idea that Poe had written in the room.

She also spent a lot of time in Alderman Library and liked to visit the Albert and Shirley Small Special Collections Library between classes to look at displays, including items related to Poe’s life, and items that had been recently donated related to William Faulkner, a former writer-in-residence at UVA.

“I got goosebumps,” said Devers, who studied English literature and archeology at UVA. “For a time I was so into Poe that I traced his life and visited every literary landmark I could find related to him, and have a small collection of rare Poe books, and a brick from one of his houses that was salvaged during demolition. I also remember passing a door marked ‘Rare Book School,’ and wanting to go. I still do.”

Now, Devers enjoys that exciting feeling of discovery nearly every day as a London-based rare bookseller and arts journalist, writing under the name A.N. Devers.

She spends many days scouring bookshops, markets, book fairs and the corners of the Internet for rare books, first editions and other literary finds for her new online bookshop, The Second Shelf. She is in the last week of an already successful Kickstarter campaign to open an online store and publish a quarterly catalogue of rare books and work by contemporary women writers. Both will debut this summer with more than 500 rare books available.

The collection focuses on women writers, both those with well-known names and many who have been overlooked. It spans several centuries, including everything from a three-volume “Sense and Sensibility” edition signed by Jane Austen’s close friend Martha Lloyd, which is available as a perk in her crowdfunding campaign, to first editions from contemporary authors like British novelist Zadie Smith.

Below, Devers shares more about her new business, the finds and discoveries that have delighted her most, and her own upcoming book, “Train.”

Q. You are just a few weeks out from officially opening your rare bookshop. How’s it going?

A. Though The Second Shelf has not been officially open online, I have been working as a rare book dealer quietly for the past two years. I wanted a chance to practice and learn the trade while building up my first stock.

It’s gone well. There’s a big learning curve, but I’ve learned to buy and sell, and I’ve managed to make profits at a few fairs I’ve attended. But I am new to London and don’t have a client base yet, so I wanted to raise awareness and funds to bring more attention to the business, particularly as I considered it a socially purposed one. The Kickstarter campaign runs through June 12, and sometime after that The Second Shelf will open with about 500 books catalogued.

I will also publish a hybrid of a rare book catalogue and a literary magazine called “The Second Shelf: A Quarterly of Books and Words by Women.” It features contemporary writers responding to work that has meant a lot to them. I’m publishing essays, interviews, fiction and poetry by exceptional writers including Jesmyn Ward, Ariana Reines and Dorthe Nors. Rare book catalogues can be quite difficult to parse if you aren’t already a collector or dealer, so I wanted to create something that would be engaging in a different way and hopefully get more people interested in collecting books by women.

Q. Why did you choose to focus on female authors?

A. There are a few reasons. First there are far fewer books by women on our bookshelves that carry the cultural estimation of their male contemporaries despite many women writers who deserve that esteem.

One of my favorites to mention is Shirley Jackson, who wrote for women’s magazines as a free-lancer and published one of most acclaimed American short stories in The New Yorker in 1948 with ‘The Lottery.’ Her novels often fall in and out of print, but I am one of many who believes she deserves a much more distinguished place in American literature than she currently holds. I see it again and again as a reader and bookdealer: women writers with distinguished careers and talent tend to fall out of fashion, or be obscured, or treated as a footnote in the literary canon.

Although things are shifting, English literature was built primarily by a male-dominated academy, and in the marketplace women are often treated as niche, which is why we have terms like ‘chick lit’ and ‘women’s fiction’ where you will find great writers categorized, including Charlotte Bronte and Jane Austen.

Additionally, women have not had as much access to the rare book market and become collectors in the same numbers as men, nor do they collect books the same way. This has added to the inequality on our bookshelves and on the shelves of our archives and libraries. Although it might be a hidden supply line, the rare book trade often informs what ends up in archives and institutions, so buying or selling a woman’s book can truly help to create a market for that author and inform, in a small way, the literary legacy of that woman. I now go out of my way to read secondhand books by women I’ve never heard of.

A. Last month I bought a flimsy paperback with a striking cover. It turned out to be a first edition of “Muriel at the Metropolitan” by Miriam Tlali, the first novel published by a black South African woman. It was written in 1969, but couldn’t find a publisher until 1974, when it was heavily edited to make it past censors and then banned anyway. It’s such a readable book, it’s frank and strongly voiced, and captures South Africa during apartheid from the perspective of a black woman working in a white-owned business. It is a formidable accomplishment. And like many women writers, I was left wondering why I didn’t know her name before this. I want to read the manuscript as she wrote it before they expurgated it.

Q. Any other favorite finds?

A. One of the oldest items I have right now is a 17th-century book by French writer Jacquette Guillaume. It’s a rare early feminist book called “Les dames illustres, où par bonnes et fortes raisons il se prouve que le sexe féminin surpasse en toutes sortes de genres le sexe masculin,” which translates to “The Illustrious Ladies, Where by Good and Strong Reasons it is Proved That the Female Sex Surpasses in All Kinds of Genres the Male Sex,” with very few copies available in libraries around the world. Very little is known about Guillaume. Though she as not as well-known, her work laid important groundwork for writers in England, including Elizabeth Elsob, the “Saxon Nymph,” the pioneering 18th-century scholar of Anglo-Saxon. Guillaume is believed to have written another work called “La femme genereuse,” but a copy has not been located.

That is the kind of thing I get excited about – finding a woman writer who has not been widely taught in literary history. It happens again and again, no matter what the era.

Q. What would be a dream acquisition for you?

A. Actually, I’m lucky enough to already have it. The most common question I’m asked is, ‘But how will you bring yourself to sell them?’ I find it hard, for sure, but I gave myself permission to keep one thing that’s personally special. For me, that is a first edition of Sylvia Plath’s “The Bell Jar,” published under her early pseudonym Victoria Lucas.

I loved Plath and still do. In high school I remember learning the first edition was written under a pen name and that it was rare. “The Bell Jar” is the first book I remember wishing I could own. My copy is in a torn and tatty jacket, but I love it.

Q. In addition to opening The Second Shelf, you have a nonfiction book coming out next March, “Train,” from Bloomsbury. Tell us about it.

A. It’s part of a smart series of short books called “Object Lessons” focused on the hidden lives of ordinary objects in our lives. Each book has a one word title – there’s “Bookshelf,” “Hotel,” even “Password.” My book is “Train” – I took a solo train trip around America more than 10 years ago. At the time, I wanted to take a substantial trip, but had a limited budget. I rode Amtrak, in coach, and stopped in 12 cities over 30 days.

It was amazing – I got to hike in Glacier National Park, surfed on the West Coast for the first time, saw friends and went to museums I’ve dreamed of visiting around the country – but it was also grueling. The train was often very late, and fellow passengers were often quite angry – on such a long journey it started to change my perception of how I measure time and controlled my emotions as well. The book is also focused on being a woman on this trip, and perceptions or curiosity from others that I was traveling alone. I found it revealing not only about American cultural mores and our declining infrastructure, but also a measuring stick for how we need to work on a woman’s perceived place in the world.

Q. You are getting your business off the ground, writing articles for several newspapers and magazines in American and England, and working on a book. How do you juggle everything?

A. Like most people who have a lot on their plate, I am frequently behind. I don’t always manage to keep up. And I don’t think it’s a great idea really – this one that we can possibly juggle everything. I have help. I have child care and I still drop a lot of plates. It’s frustrating. I have this secret fantasy that I will discover a hidden day of the week that exists just for me to get everything done, but that hasn’t happened so far. Even the fantasy of a secret work day is frustrating!

However, I love my business, I love being a writer, and I love being a mom to my 4-year-old son, so I feel privileged. Like most writers, we need other jobs that support our financially under-rewarding careers. Edgar Allan Poe made a pittance as a writer, and was an editor during the day. Faulkner went to Hollywood to write screenplays. Over the years I’ve been an archaeologist, a bookstore publicist, a non-profit professional, an adjunct professor – all while writing.

But with rare books, like my love of writing it’s a complete passion. It’s long been a dream to make a living pursuing what I love, and I might have finally figured out how. I’d like to help readers and institutions balance their bookshelves.

In Memoriam: Life of Drama Professor To Be Honored Sunday END_OF_DOCUMENT_TOKEN_TO_BE_REPLACED