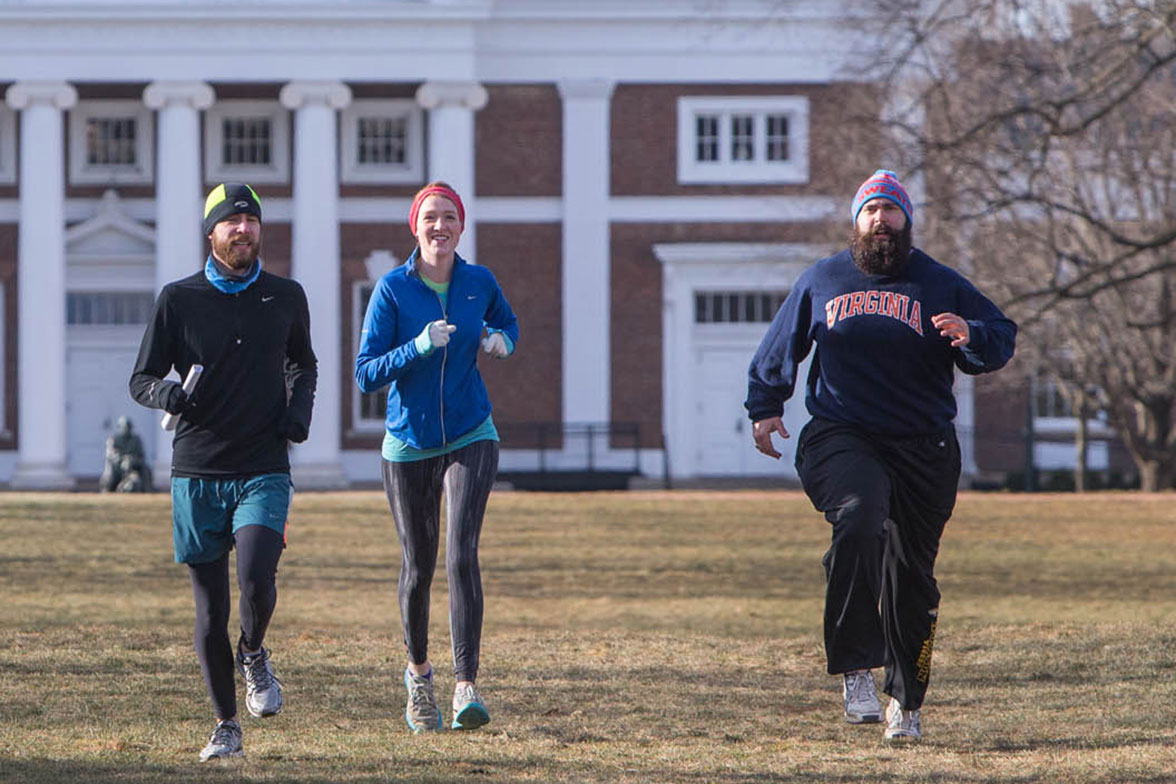 Adam Thies grew up in the land of Lincoln in a family full of lawyers. In fact, his great-grandfather received a letter from Abraham Lincoln, who was on the county circuit in central Illinois at the time, offering to represent the county in a lawsuit with a railroad company. Thies’ great-grandfather declined, and Lincoln went on to represent the railroad company, eventually winning the case.

“Lincoln was very much a part of my story coming out of Illinois and as a family history,” Thies said. “You can’t get better than Lincoln.”

But then he moved to Charlottesville, where he is working toward a master’s degree from the University of Virginia’s Curry School of Education.

“Coming here, I saw the same kind of thinking with Jefferson and I wanted to know why that is and why I think of Lincoln the way that I do,” he said.

He went about indulging his interest in an unusual way. A high school cross country runner, Thies moved up to half- and full marathons while studying history as an undergraduate student at the University of Illinois. At UVA, Thies created “Jefferson Jogs,” a pay-what-you’d-like running tour that explores different points of interest in Charlottesville that tie in to the overall story of UVA and Thomas Jefferson. 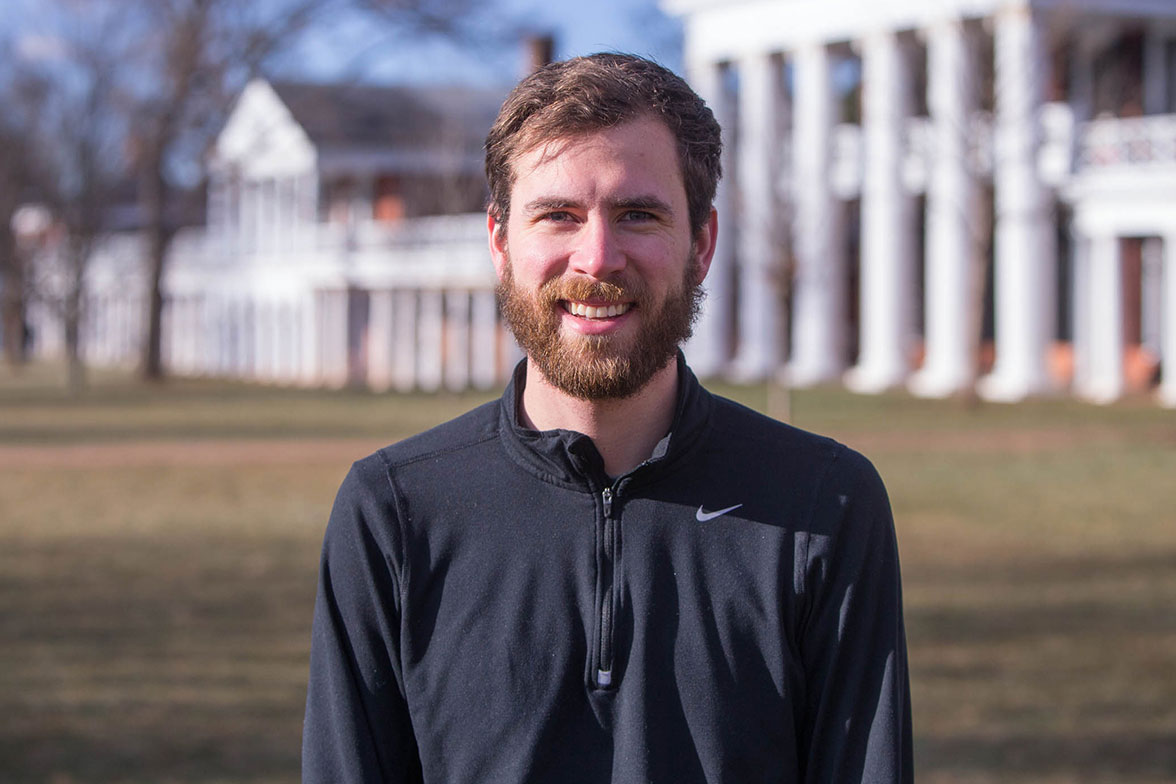 The hour-long tours, which officially began in January, are geared toward beginning runners and currently make eight stops along the 2.2-mile route, though Thies plans to add longer routes when the weather gets warmer.

UVA Today sat down with Thies to learn more about his love of history, running and how he found the perfect balance between the two.

Q. What inspired you to combine your love of history and running?

A. During my junior year of undergrad, I studied abroad in England. During my spring break, I had five weeks to travel around Europe and I really wanted to keep up with my running. I decided to sign up for the Paris Marathon, which was toward the end of the five weeks. So I did all my long runs and all my training in these towns throughout Europe and I found it was by far the best way to see a place, to just run it. You go down different alleys that you wouldn’t normally go down and you go to different spots that you wouldn’t normally go to. It was a really neat way to make a place come alive. I’ve always had this love of travel, running and history, and I just tied them all up.

A. The history of Jefferson and the role that UVA played within the formation of higher education in the U.S. is really key and what makes it really interesting. With other U.S. presidents, you can go to their homes and get a sense of who they were, but with Jefferson, since he was an architect in addition to a politician and a botanist and everything else, this is really a full institution that was him and very much his theories and what he wanted, the way he thought of the world, manifested into brick and mortar.

I came here and I saw more people running in the mornings than I ever had and thought, “This is perfect for a running tour.” This is what you want: history and running, a community that likes both.

Q. Are the people you have taken on the tour familiar with the area and its history?

A. It’s been a mix. I had Texans who are living in D.C. come down and do a tour and it was a blank slate. They had never heard the term “Academical Village.” I also had a UVA professor take the tour who knows the story very well. And so after that tour he said, “You’re kind of harsh on Jefferson.” But I don’t really see it as being harsh, rather just trying to show the negatives and the positives – because most people are conflicted and not everyone is exactly what they write down. So everyone’s kind of conflicted.

That’s the main thing I want to show: how human Jefferson was. He was an actual person who was conflicted himself.

Q. Do you have a favorite stop on the tour?

A. Oh, man. I do like Edgar Allen Poe’s room; just talking about Poe is really interesting. He has a really good letter where he talks about two students fighting outside of his room and this guy ends up taking bites out of the other guy’s arm. They’re really raucous. There’s riots on the Lawn and people are gambling and people are cheating at cards and sitting there smoking and drinking. And he described it as “the Wild West of universities” at the time. You think of Poe, because he was a writer, as a sensitive guy, really bleak and sad. And he sees these guys fighting outside and he’s a young kid and its just kind of an interesting image of why he ended up doing what he did, because of his rough college years.

Q. What’s the plan for Jefferson Jogs when you graduate in May?

A. That’s really dependent on what job I get. If I get a job at UVA, I’ll be able to continue on with Jefferson Jogs, which I’d love to do. If I can’t, then my hope is that it grows to the point where I can bring on some history undergraduate students or people who love running and are interested in the history of UVA and would be interested in doing something like that. I’d love to bring them on to keep it going and maybe manage from afar or something along those lines.

It’s just been a labor of love and I’ve been enjoying doing it. Getting to talk about the history and taking people on runs has been really fun. I don’t want to think too far to the future and get my hopes up for if it grows or not.

Q. Would you ever start something similar in another town?

A. Oh, definitely. It’s going to be hard though. The conditions are so ideal here where you have history and a love of running. It would have to be right. I definitely would love to do another one in another city. I think I have to go to other presidents’ hometowns though. It works for Lincoln, “Lincoln Jogs,” a play on Lincoln Logs. But I don’t think the same thing works with Woodrow Wilson or anything.

To register for a tour, visit jeffersonjogs.com.

What Is the ‘4th Side’? END_OF_DOCUMENT_TOKEN_TO_BE_REPLACED