Q&A: How to Make the Criminal Justice System Work Better 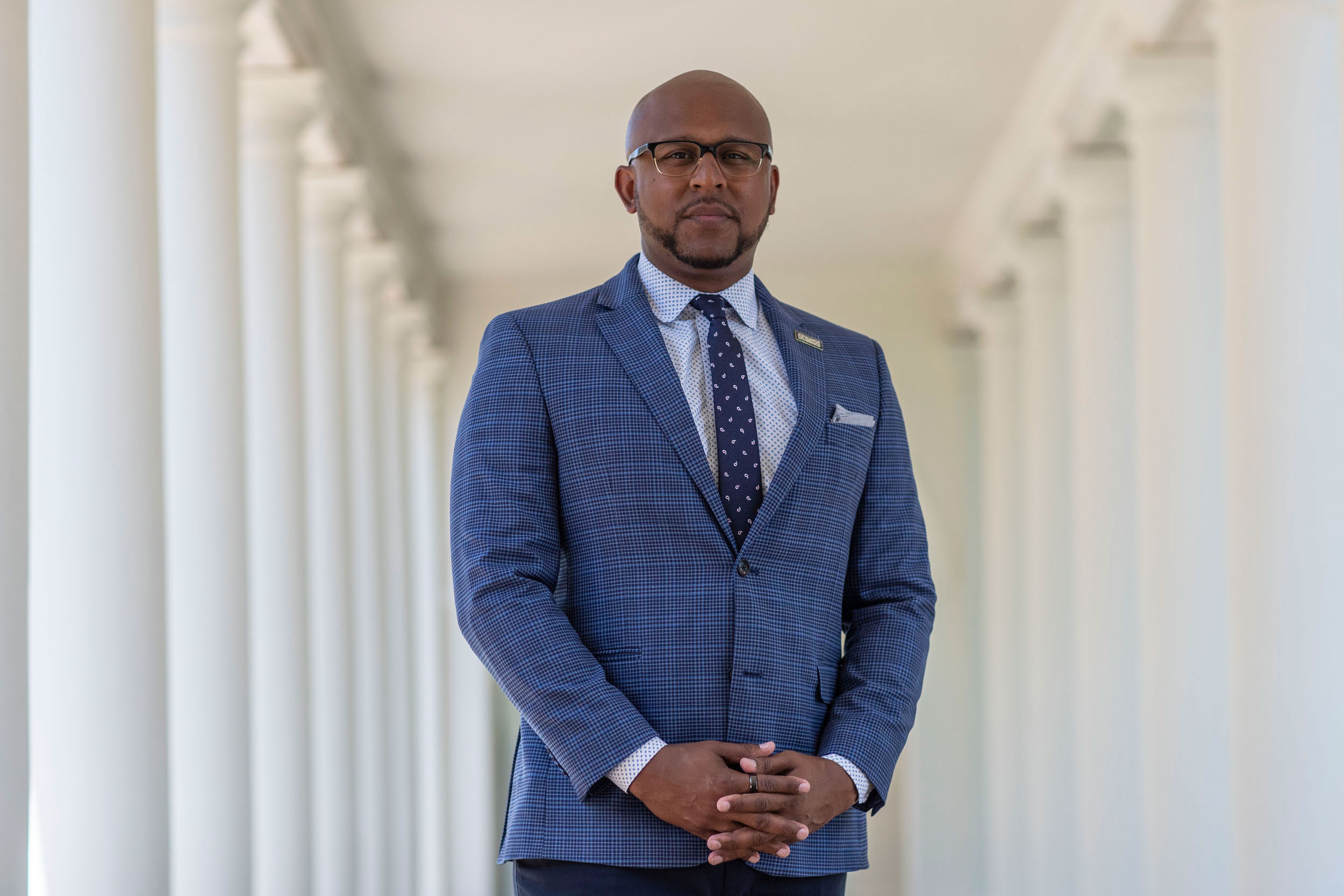 Larry Terry is trying to make it easier for people who have finished their prison sentences to return to society as productive citizens. (Photo by Sanjay Suchak, University Communications)

The stacks of handwritten letters sitting on a table in Larry Terry’s office tell stories of remorse.

One by one, Terry thumbs through them, his facial expression changing as he recalls the details of each correspondence.

Some of the letter-writers have committed unspeakable acts, things that Terry said “you can’t un-hear.”

Other correspondents have done something regrettable when they were young, not understanding the consequences of their actions.

Then there are the people who fall in the middle; Terry can’t quite figure out the circumstances of their downfalls.

All of the people are convicted felons currently incarcerated in Virginia’s correctional system. They have written to Terry, the executive director of the University of Virginia’s Weldon Cooper Center for Public Service, simply because they saw his name and “parole” somewhere in the same sentence.

“Many of them are simply reaching out because they want to feel like there is hope,” said Terry, who is still trying to figure out which letters to respond to. “What kind of hope do they have? Whether it’s their time in prison or after they get out, are things going to better for them?

“Some of the letters are really tough to read. You can feel the desperation.”

In January, Virginia Gov. Ralph Northam appointed Terry to serve on a team whose mission is to identify the best practices and strategies for criminal justice reform, and specifically, how to ensure that people who have finished their sentences return to society as productive citizens.

Terry is part of a six-member team, chaired by Secretary of Public Safety and Homeland Security Brian J. Moran. The others are Virginia Parole Board Chair Adrianne L. Bennett; parole board member Linda L. Bryant; Director of the Virginia Department of Corrections Harold Clarke; and Fairfax County Del. Mark Sickles.

Terry, who holds an appointment in UVA’s Frank Batten School of Leadership & Public Policy, is familiar with the inner workings of the criminal justice system.

During his time at the University of North Texas he was involved in a number of initiatives, including the Second Chance Community Improvement Program, one of the first felony community courts in the United States; and Miles of Freedom, a nonprofit focused on reentry programming.

Terry, a California native who came to UVA in 2018, recently sat down with UVA Today to talk about his latest pursuit.

Q. You’re about two-thirds of the way through Gov. Northam’s learning collaborative. What’s the experience been like?

A. It’s been great to be part of this dynamic network of people who are concerned about the wellbeing of the Department of Corrections as an institution, but also helping the inmates have a better transition when they become returning citizens.

Q. Before you came to UVA, you were involved in giving people who had been in trouble with the law second chances. Has this always been important to you?

A. It hasn’t always been important to me. It became important to me when I was in Texas and was able to connect with a city attorney named Yulise Waters, who had been a part of the founding group that established the nation’s first felony community court, which allowed individuals who were arrested for non-violent offenses to go through a six- to 18-month program aimed at addressing participants’ issues, from mental health to substance abuse.

The initial vision for the program came from a judge named Rick Magnus, who felt that minorities in particular were being disproportionally sentenced to jail or prison, and he wanted to provide an alternative to incarceration that improved the person, the criminal justice system and the community.

I would show up once a week to court and got to learn what the participants were going through, just as people. You stop looking at them as, “You committed this crime.” You start to understand that there are a lot of things that are contributing to why this crime happened – drug addiction, people being sexually abused, dropping out of school in eighth grade, teen pregnancy. All of these things contribute to this moment where they’re now standing in front of a judge.

You have to look at it and ask, “This is a human problem, so how do we address their issues holistically and not just focus on the criminal aspect?”

Q. And you felt a personal connection as well?

A. Yes. A lot of the faces coming through the court were minorities, and, for me, as an African American and Hispanic man, it was something that touched me. About six months into my time with [the Second Chance Community Improvement Program], I experienced one of the more difficult days in court, where a participant was taken to jail and I had a hard time watching it all happen in front of me.

On my way home, I called the program’s case manager and I said, “There’s more that I could be doing than just collecting data for the court,” which was my initial role on the SCCIP team.

I did some mentoring, but I also played a part in their educational planning in terms of getting participants in trade or community college programs, and by meeting with their GED instructors to assess their progress. But ultimately, I tried to do my part to connect our participants to opportunities that could improve their lives.

It was one of the best things I’ve done in my professional career, because it was so impactful to see the kinds of things our participants were able to achieve if we helped them get access to the resources they needed to not just survive day by day, but to succeed and make long-term investments in themselves.

Q. How does the work you did in Texas influence what you’re doing now with the governor’s team?

A. The work I did there was a jail diversion program that was an alternative to incarceration and would expunge their record if they graduated. The work I am a part of now is primarily concerned with institutional reform in the criminal justice system and helping returning citizens be successful upon their release.

Thoughtful reentry plans are critical in providing stability and help continue the growth or reformation someone may have experienced while they were incarcerated. But many of the same issues we’re seeing when they are released were also factors before they went to prison – from a lack of job opportunities to access to safe, affordable housing.

These hardships continue and are often systemic, and while in many ways the issue of assisting returning citizens can be controversial, we need them to be contributing to their communities in positive ways. How public servants and other stakeholders constructively address this issue requires complex discussions about broader public safety, but also can’t ignore the importance of access to resources and creative solutions that are collaboration-driven; the burden returning citizens face can’t be placed on any single criminal justice or community institution.

Q. Have there been any promising ideas that have come as a result of this endeavor?

A. We’re still in the information-collection stages, but I think one thing that has become very clear is that housing is a widespread concern for service providers as well as those who were formerly incarcerated. We are trying to explore as many options as we can to get returning citizens in stable housing – not just transitional homes or halfway houses, where their time is limited.

It’s a basic needs issue, and if you can’t address it effectively, then other problems are likely going to emerge, as they would for almost anyone. So I think as a theme, our group is paying a lot of attention to housing and how the network of stakeholders across the state can play a role to help.