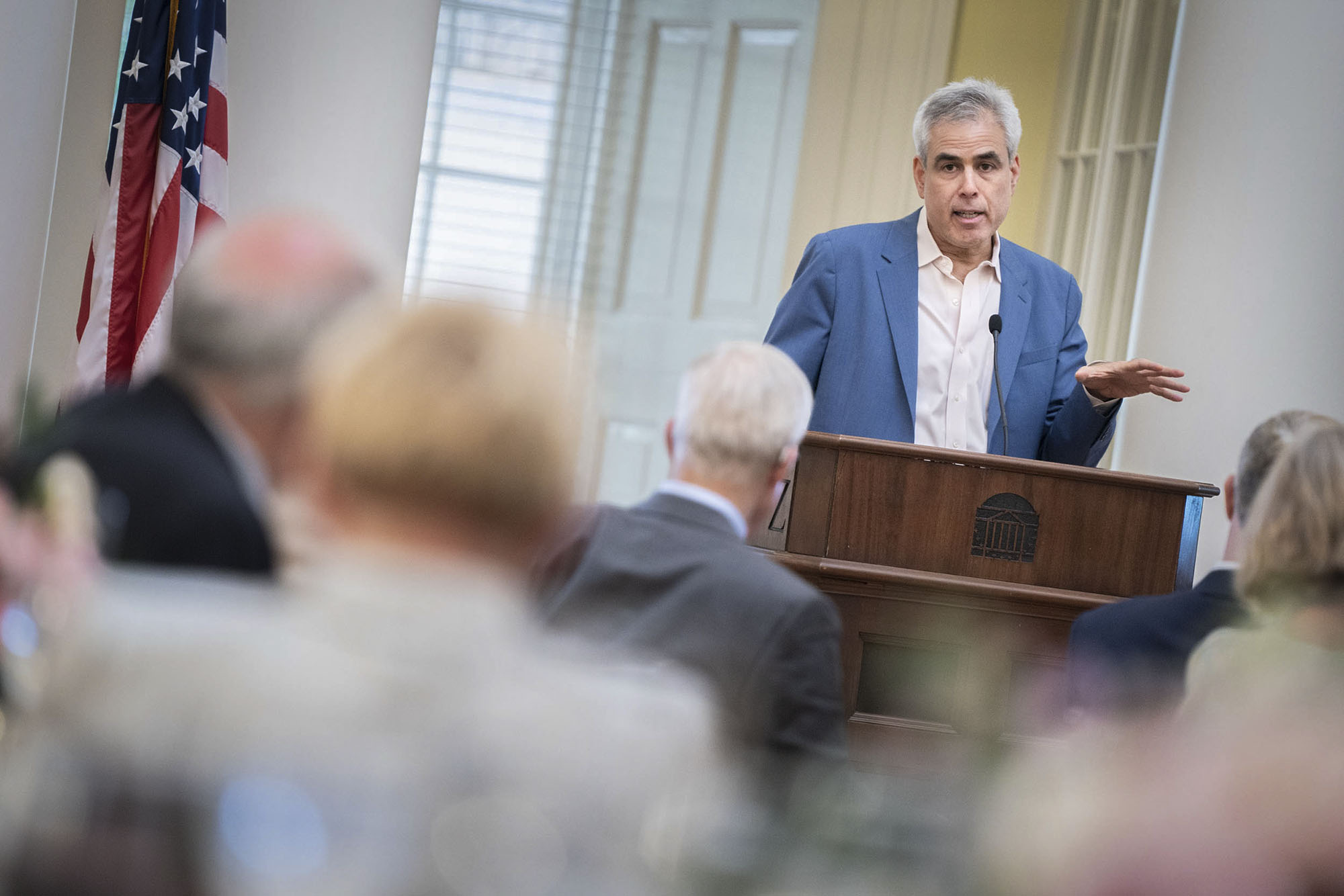 Trust in colleges and universities is eroding across the political spectrum, and campuses reflect worsening societal trends: polarization, distrust, and a kind of paralysis brought on by an inability or unwillingness to engage with people outside of one’s primary group.

With even the causes of these trends in dispute, Haidt acknowledges the solutions may not be  obvious. But he suggests there is a clear way forward. Universities, Haidt said in a recent visit to Grounds coinciding with the June Board of Visitors meeting, should focus on their roots as places where truth and knowledge are pursued by bringing people and their ideas together in settings that provide respectful discussion and debate.

To fully function, those settings must include a diversity of viewpoints.

“You need to have someone in the room who thinks differently,” he said.

Haidt, co-author of “The Coddling of the American Mind” and currently a professor of ethical leadership at New York University’s Stern School of Business, spent 16 years at UVA. A social psychologist, Haidt’s area of research is moral psychology and the intuitive foundations of morality.

UVA Today caught up with Haidt to briefly explore the threats and opportunities ahead.

Q. You describe this as a “perilous” time for higher education. What is at stake and at risk?

A. We live in a time of rising political polarization and declining trust. Universities have a sacred task: the discovery and transmission of truth and knowledge. As polarization rises, it affects everyone, especially if they live and work within an institution that has low political diversity – that is, almost everyone is on one side, politically. This is the case for most of our leading cultural institutions – universities, the major media, the arts, nonprofits, journalism, and the elite corporate world. When these institutions take sides on political issues, they alienate the other side.

Higher ed can’t function when conservatives and Republicans see universities as part of the blue team – a place hostile to their values and their children. This is especially a problem in red states, but it’s a problem for the entire higher ed universe.

Q. You broadly categorize two key mindsets for college students: Those in “defend” mode and those in “discover” mode. What’s the difference and why is it important?

A college education does little good for someone habitually in “defend” mode – they see threats everywhere. A student who is habitually in “discover” mode feels like a kid in a candy shop; there are unlimited opportunities at a world-class university like UVA.

Gen Z has very high rates of depression and anxiety – far higher than the rates for millennials. When they arrived on campus around 2013, many things began to change; many more students saw parts of normal academic life, such as a visiting speaker, as a threat.

Q. The “defend” mindset has momentum right now, according to your analysis. How does this lead to students, faculty and administrators “walking on eggshells,” as you describe it?

A. Most students want to be exposed to diverse views, and most students are willing to cut others some slack and judge them by their intentions. But there is a small group on each campus, and now in many companies, that has accepted a set of ideas in which intent doesn’t matter, it’s only the impact of a word or phrase that matters.

This makes all social interactions dangerous – you never know how someone is interpreting your words, so you have to walk on eggshells. Students and professors often say this – “eggshells.” We are all afraid of a small subset of students.

Q. Social media shows up as a villain in more than one way when you discuss today’s environment. What are some of the ways its emergence has led to our current situation?

A. The most important thing is the way that social media changed in 2009, when Facebook added the like button, and Twitter added the retweet button. By 2012, social media became an outrage machine. Everything since then has been strange and full of conflict. If you say even one word that somebody takes offense to, it becomes a whole big thing. And now every day in every institution it seems that many things become a whole big thing. People are getting really tired of it.

Q. On the day you visited UVA, the Board of Visitors approved a statement regarding the University’s commitment to the principles of free expression and free inquiry. What must a university do to ensure that such a statement means something more than just a resolution on paper?

A. Universities are complex, dynamical systems. You can’t change them with a single proclamation. You have to change parameters.

It begins with a clear statement of the “telos,” or purpose, of a university – the pursuit of truth. You then have to put policies all around that which will cohere so that everything is conducive to the pursuit of truth. Speech policies should not just say “free speech!” They should say, “We need people to be able to participate in conversations, and challenge each other’s ideas, without fear of reputational harm. Here’s how we make claims, and respond to claims, in an academic context.”

Then in orientation, you offer readings and sessions that prepare students for the collective search for truth. You do all you can to shift students into discover mode, so they see differences of perspective as something they are curious about, not threatened by.

Q. Today’s trends can be a bit of a downer. Can you leave us with something that gives you optimism for the future about higher education and this fractured society?

A. The great majority of students in Gen Z want to learn, they want to be exposed to diverse viewpoints. Many college presidents, including President Jim Ryan, are taking steps to help them do so.

Class of 2020: Memories and Moments From a Long-Anticipated Celebration END_OF_DOCUMENT_TOKEN_TO_BE_REPLACED