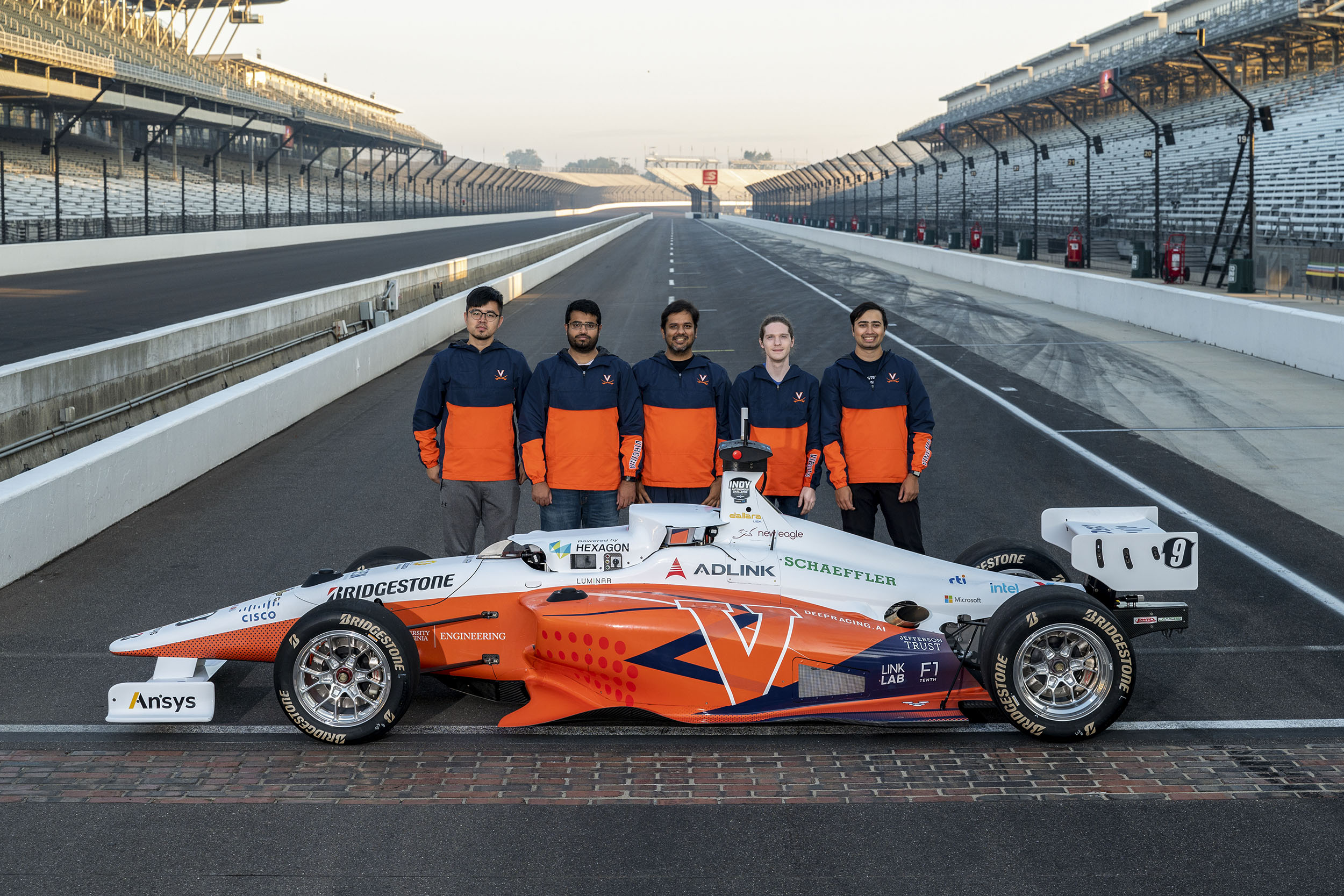 Members of Cavalier Autonomous Racing pose with the car that will race Saturday at the famed Indianapolis Motor Speedway. None of them, however, will be driving. (Photo by Paul D’Andrea)

When lights flash and flags wave at Indianapolis Motor Speedway this weekend, one iconic scene will be missing: race car drivers with helmets and bright-colored safety suits poking up from the cockpits of their rockets on wheels.

On Saturday, the speedway will host the first-ever race with self-driving cars. The University of Virginia School of Engineering and Applied Science’s Cavalier Autonomous Racing team is one of only nine university teams from around the world that have qualified to compete for a $1 million prize in the Indy Autonomous Challenge Powered by Cisco.

The race will be livestreamed on Saturday from 1 to 4:30 p.m. The UVA Engineering students and faculty adviser Madhur Behl, an assistant professor in the departments of Computer Science and Engineering Systems and Environment, have shared their yearlong preparation for this weekend’s race in a video documentary series called “Look Ma, No Hands!” produced by the Engineering School.

“What better way to explore the limits of self-driving cars, and really test the limits of artificial intelligence and control and robotics, than head-to-head autonomous racing, which has never been attempted before?” said Behl, a member of UVA Engineering’s Link Lab for cyber-physical systems and co-founder of an early precursor to this weekend’s event, the F1/10 International Racing Competitions. “Motorsports have always been the proving grounds for safe and upcoming technologies for automobiles.” 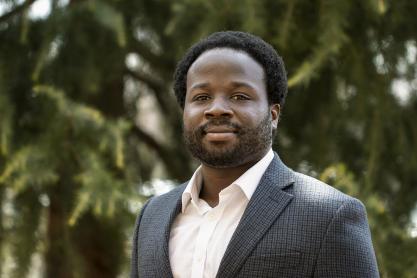 Behl and his team of 11 engineering undergraduate and graduate students have worked for more than a year to develop, test and fine-tune the software that will control their car on Saturday.

“We are exceptionally proud of our students and Madhur for their hard work and dedication to this challenge – not just because of the chance to win bragging rights for UVA in a high-profile race, but because of the opportunities to advance knowledge and technologies for autonomous transportation and provide hands-on research experiences for students,” UVA Engineering Dean Jennifer L. West said. “With our eyes toward the immediate excitement as well as the promise for the future, we will watch the race with great anticipation on Saturday. Go Hoos!”

The Indy Autonomous Challenge Powered by Cisco got its start about two years ago, Behl said, when Energy Systems Network, an Indianapolis-based non-profit collaborating with the Indianapolis Motor Speedway, brought together public, private and academic institutions to challenge university teams from around the world to develop and test a new generation of automated vehicle software.

An important goal of the high-profile race is to inspire the next generation of STEM talent. This is Behl’s passion, too. He trains students in his UVA Engineering classes to build 1/10th-scale autonomous cars and race them around a track in the Link Lab. 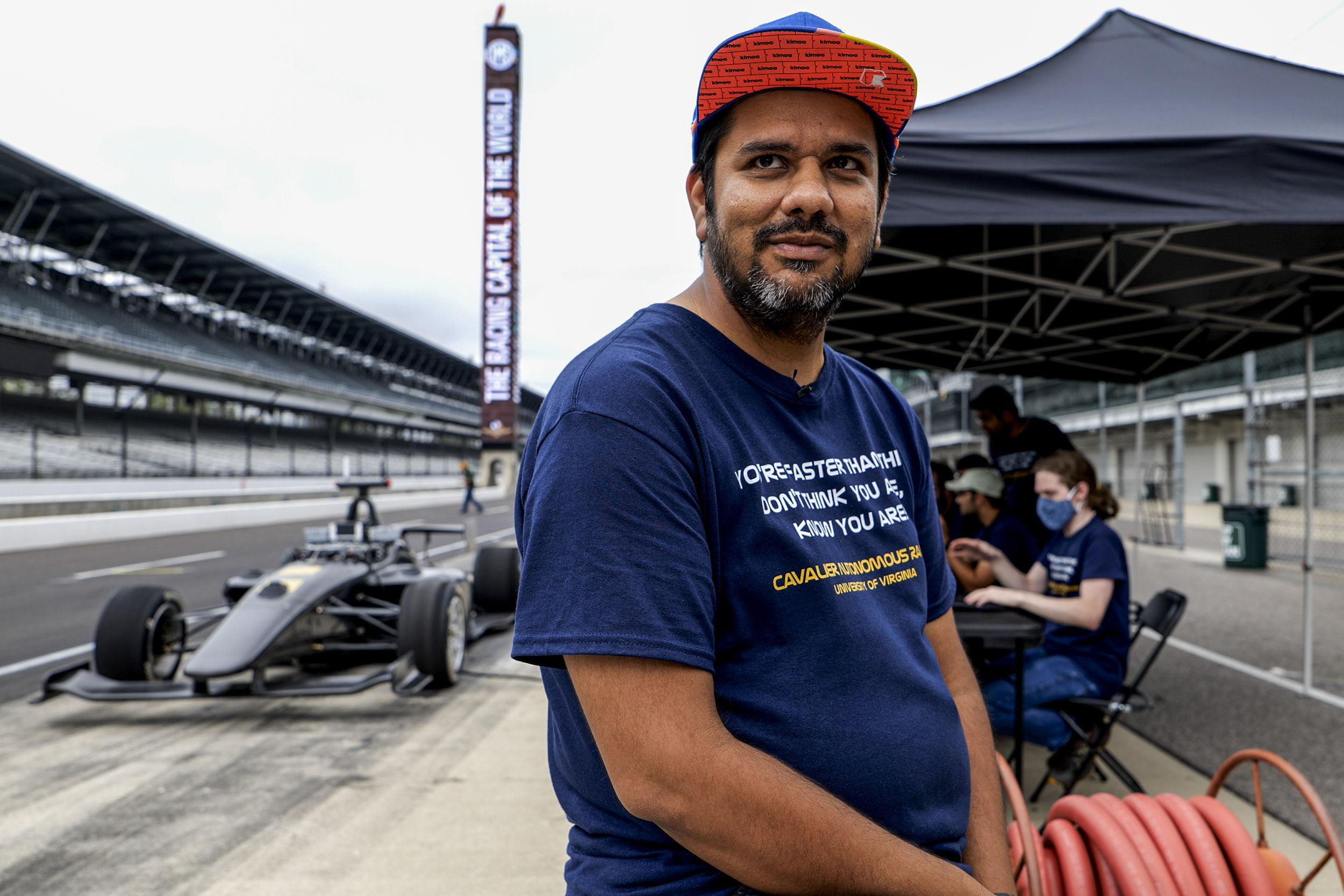 Madhur Behl, an assistant professor in the departments of Computer Science and Engineering Systems and Environment, advises the team of graduate and undergraduate students. (Contributed photo)

In the documentary series, Arvind Anand, a computer science undergraduate student, described the feeling of working on a full-scale vehicle for the Indy race. “Actually being in front of the car and working on it feels really different,” he said. “It feels more tangible and it’s a lot more exciting.”

Behl serves on the Academic Advisory Council for Partners for Automated Vehicle Education, a nonprofit aimed at educating the public about automated vehicles. That organization released survey results in 2020 showing that three in four Americans believed self-driving technology was “not ready for primetime” and almost half would never ride in a self-driving car.

“A big challenge arises in ensuring that an autonomous car can make safe decisions when it encounters situations that are uncommon and difficult to predict,” he said. “Drivers deal with such situations when other drivers suddenly cut them off, signal right but turn left, run red lights and break the rules for rights-of-way at stop signs.”

The work Behl and his students are doing explores the idea that, if an autonomous vehicle is more agile, it can react quickly in such situations by aggressively braking or steering when a collision is imminent.

“In motorsport racing, there is a saying that, ‘If everything seems under control, then you are not going fast enough,’” Behl said. “We have built an artificial intelligence-driven vehicle with that as the objective function.”

Behl formed UVA’s Cavalier Autonomous Racing team in part with a $50,000 grant from the Jefferson Trust. For the past few months, with support from the Engineering School, the Department of Computer Science, the Link Lab and donations from generous alumni, Behl and student team members have been working in Indiana, refining their software and testing the actual race car they will compete with on Saturday.

“We hope to learn a lot from this race,” said Varundev Suresh Babu, a Ph.D. student in computer engineering. “This is, as of now, the best thing that can happen for our entire field. I’m really happy to be here.” 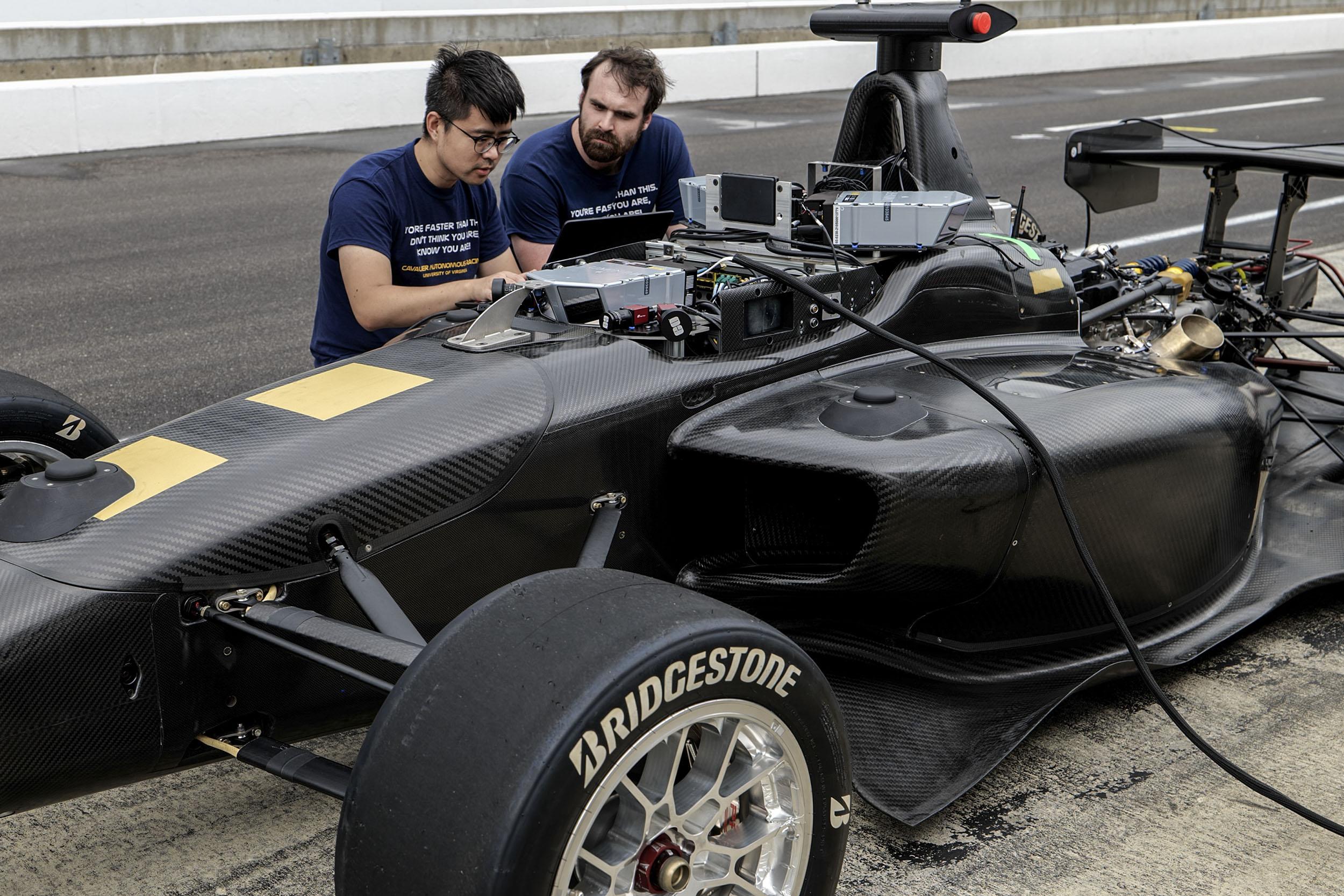 Behl said he is proud of what the students have already accomplished. “They are already winners in my book,” he said.

On Thursday and Friday, the team was at the practice track early in the morning, fine-tuning algorithms and analyzing the car’s performance. Technically, the autonomous cars in this Indy race can go up to 180 mph, but how close the teams get to that limit depends upon the precision and accuracy of their computer coding.

“The name of the game is how comfortable each team is in pushing the limits of their car,” Behl said. “Between now and race day, as we gain more confidence with how the code works, we will decide how far we want to push the car. 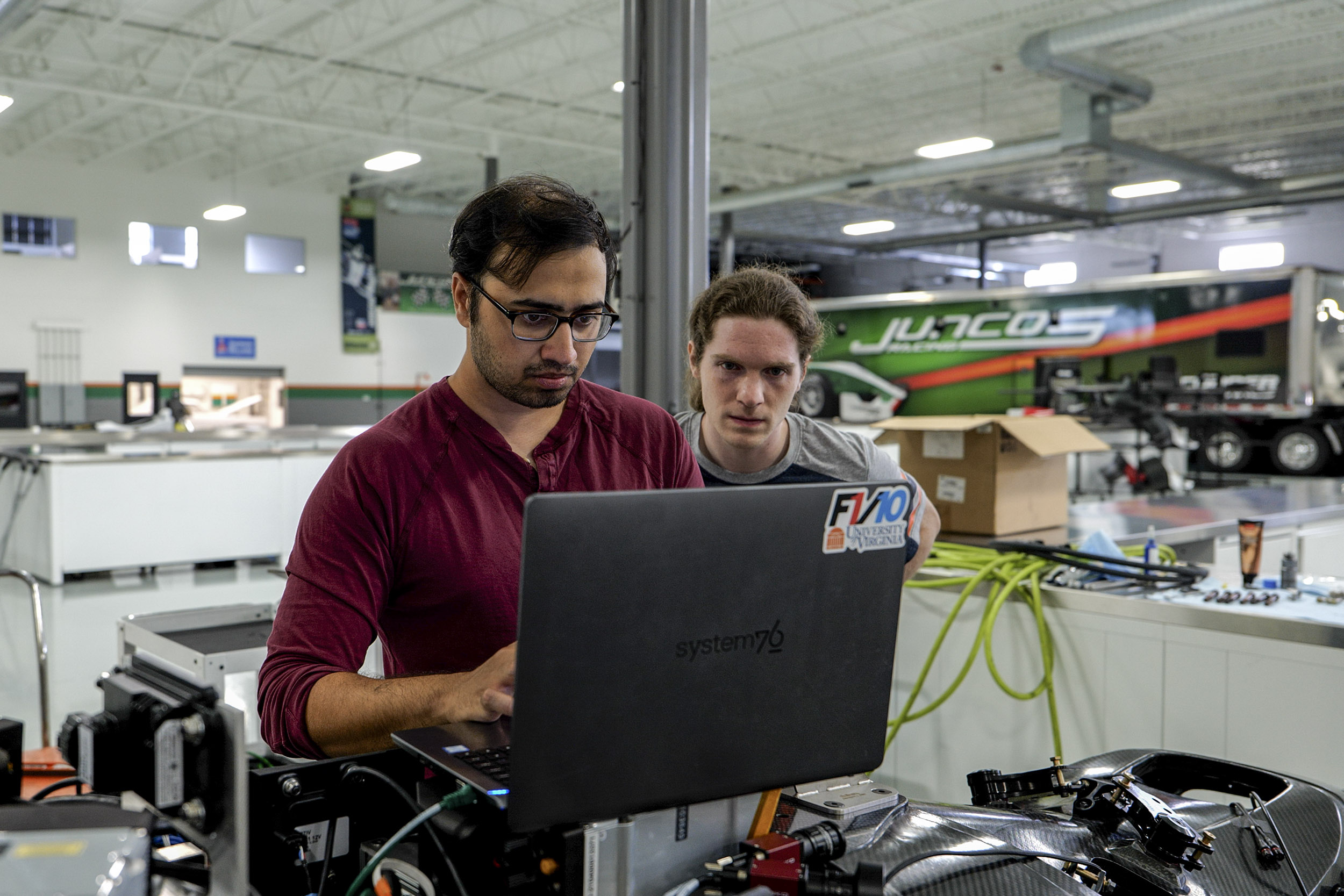 “It is exciting. When we see our car, it feels and sounds like a proper race car. You can’t help but turn your head every time it passes. The competition is pretty intense. It’s anybody’s race to win on Saturday.”

Of 25 teams listed on the Indy Autonomous Challenge Powered by Cisco website, UVA and eight others remain as finalists for Saturday’s race.

“It’s for $1 million, and we haven’t lost sight of that prize, but it won’t be the last race of its kind as well,” Behl said. “Just being here, one of the few teams in the world competing with the best minds on the track, is already a big success, and we can only go upward from here.

“This is the beginning, in my mind, of something very, very exciting, not just at the University of Virginia, but as a community, across the industry, and we are creating history here.” 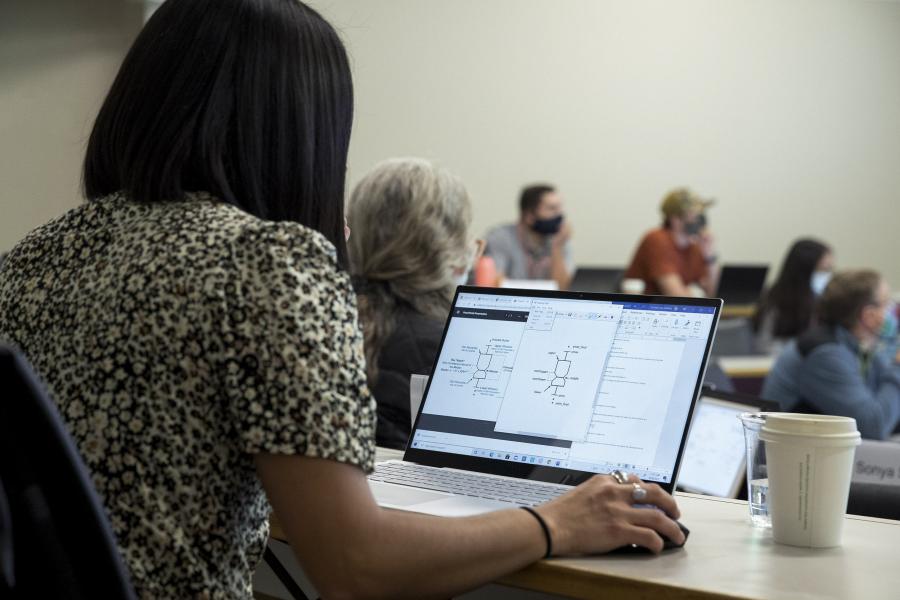 Committed Cohort Dedicates Every Other Weekend to Mastering Systems Engineering 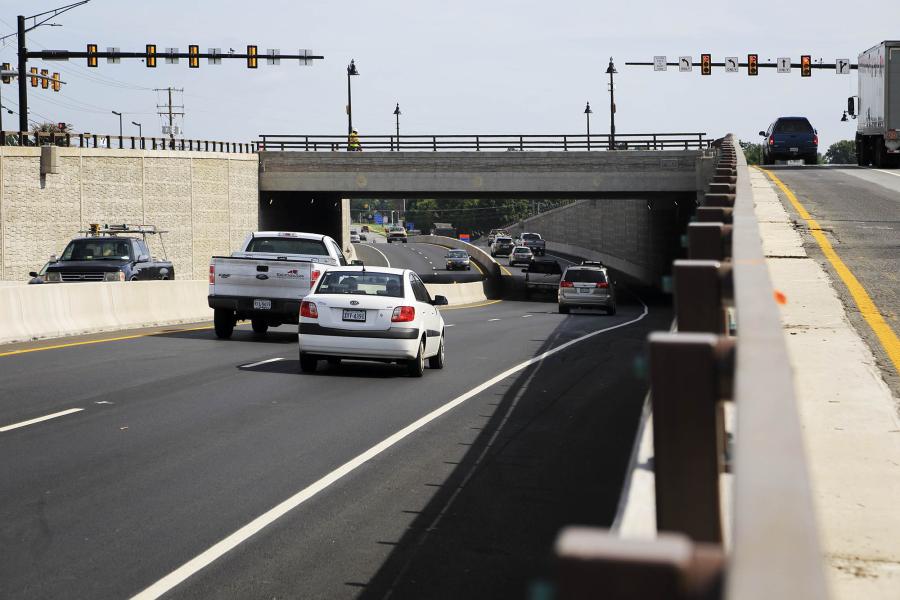 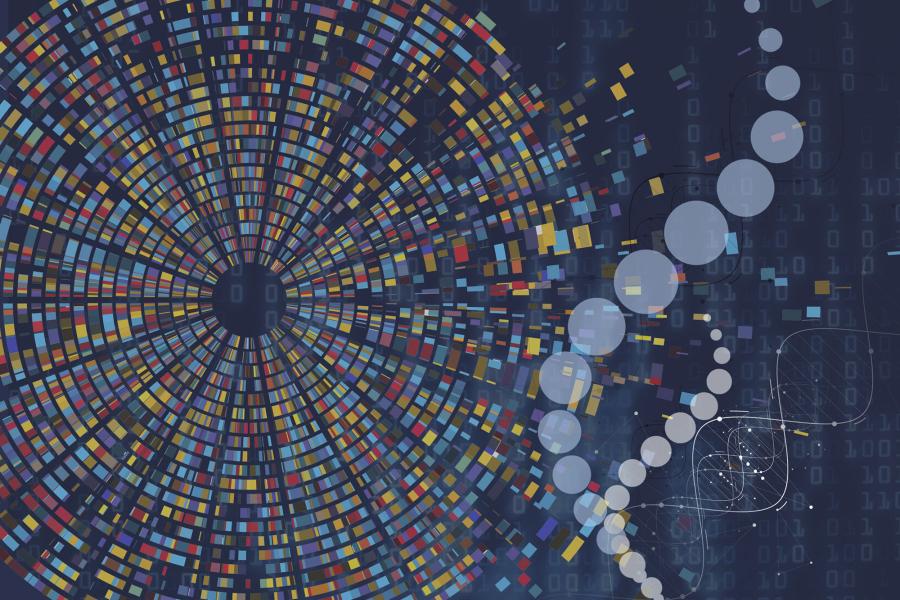 mRNA Could Fight Diseases Such as Alzheimer’s and Cancer, With Help of UVA Scientist