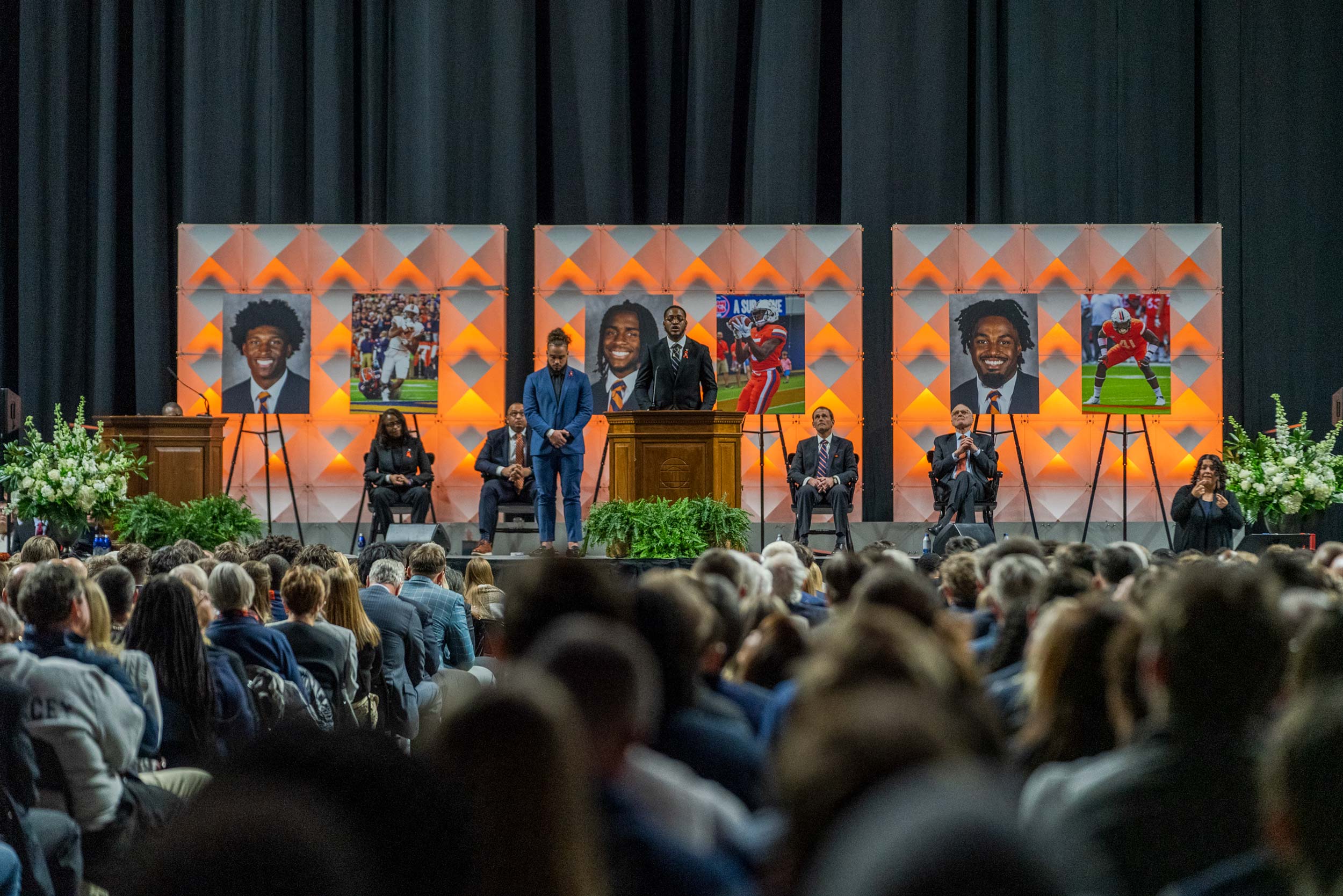 Sorrow, shock or a desire to show support – motivations varied among the thousands who decided to come to John Paul Jones Arena on Saturday to mourn, remember and honor three slain University of Virginia students.

The memorial service honored the lives of Devin Chandler, Lavel Davis Jr. and D’Sean Perry through speech, song and video memories with an audience that reflected the diversity of the University and broader communities.

The three men were members of the UVA football team and were killed when a fellow student opened fire as their chartered bus returned to UVA after a field trip to Washington, D.C., on Nov. 13. Saturday’s service also honored Mike Hollins and Marlee Morgan, who were wounded in the shooting, and signaled support for the other students on the bus, the professor who led the trip and the bus driver.

More than 9,000 people attended the service.

The crowd began streaming into JPJ around 2:30 p.m. and several spoke in somber tones about the players and the incident that took their lives.

“I just can’t think of anything to say. I’m just so upset,” one woman, who identified herself only as a third-year student, said. “I’m sorry. I just can’t talk about it.”

“Lavel was a good friend,” another student said through tears. “I’m just here for him and the family.”

For others, attending the service was a way to show respect to the young men and their community.

“I’m not here because they were football players,” said Steve Jones, 62, who graduated from UVA in 1982. “I’m here because they were young men on the cusp of life, in their prime. They were about to have the experiences of their lives. They had everything ahead of them to look forward to and it was all taken away from them.”

UVA student Noor Sharif said coming to the memorial service helped her process the tragic events. The shooting occurred late Sunday and classes at UVA were canceled for Monday and Tuesday.

“I didn’t really feel it, the realization of it, until we went on Grounds after classes resumed and you could feel something was different. You could feel the impact, that it was real. It was so quiet, and people were so quiet,” she said.

For others, attending was a way to both process and protest violence in the community and on college campuses.

“I don’t know why this is happening,” said one woman who declined to give her name, but said she was 60 years old. “It makes no sense to me. This is awful and we need to change things. I don’t know how. I wanted to be here to be with the community and to say that this has got to stop.”

“I’m here because it’s a shame anyone would die at this age. It’s crazy. It’s shocking,” said Lauren Burke, of Alexandria. “When I see their faces, it’s unbelievable. It’s not something we should just accept as normal. When you see their birthdates of 2000 and 2002, it’s just shocking. We should not get used to this happening.”

Jones, who joined with several friends in offering attendees pocket edition copies of the New Testament in front of the arena, said the shootings and the deaths make no sense.

“I’ve been crying the whole week, not just as an alum but because they were great kids. This was senseless and there’s far too much of this going on in our country,” he said. “I’m partially here to support the community and partly to ease my own grief.”