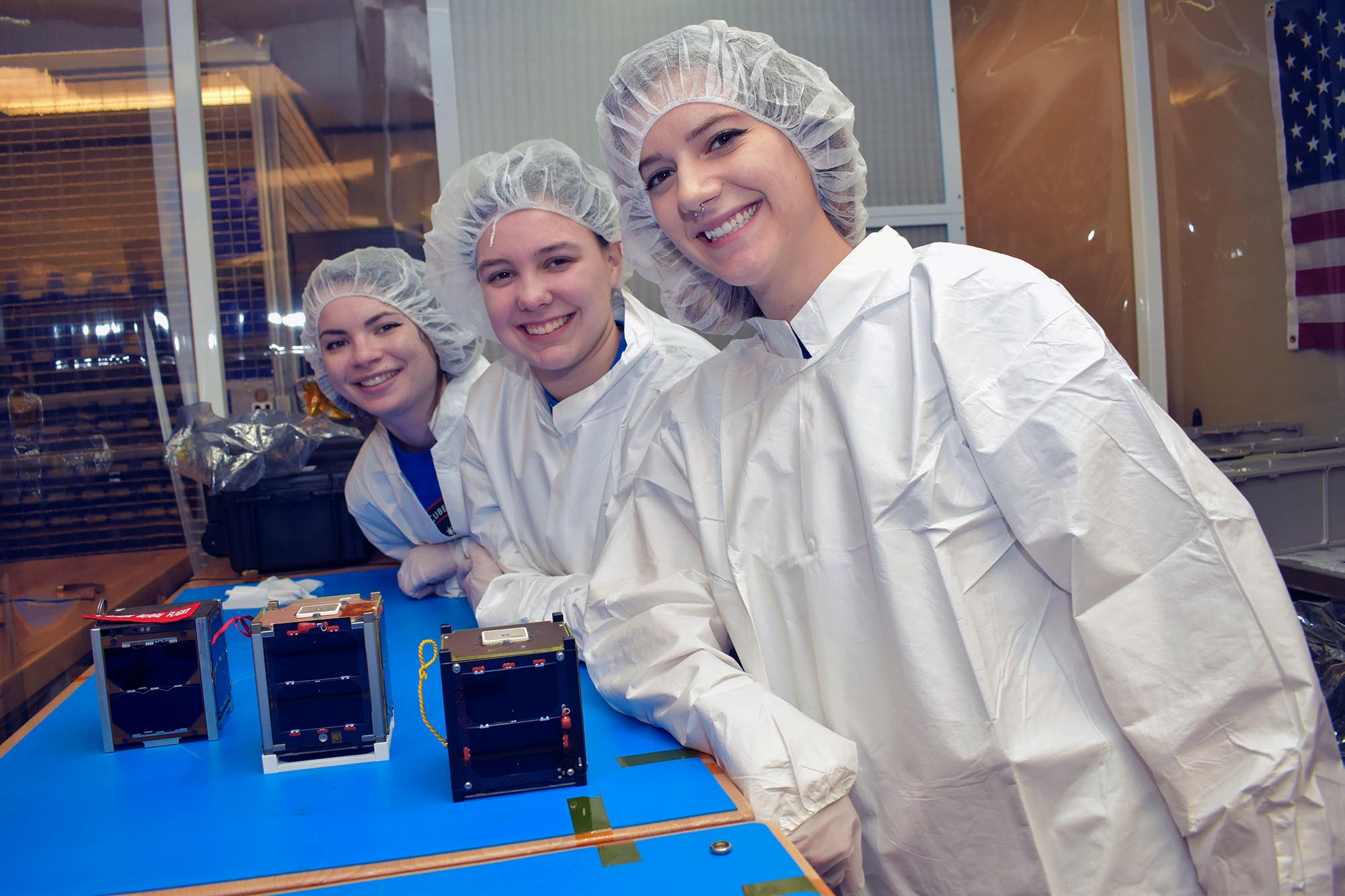 A project built by a team of University of Virginia engineering students took a giant leap toward outer space Tuesday when they and student colleagues from Old Dominion University and Virginia Tech delivered small satellites, called “CubeSats,” to NanoRacks, an aerospace company in Houston.

NanoRocks will integrate the CubeSats into a deployer aboard a rocket set for launch next month to the International Space Station.

The satellites are part of the Virginia CubeSat Constellation mission, a collaborative project of the Virginia Space Grant Consortium and its four member universities (which also includes Hampton University). The three nano-satellites, each about 4 inches cubed and weighing approximately 3 pounds, were developed by engineering students to obtain measurements of the properties of the Earth’s atmosphere. As the orbits of the satellites decay due to atmospheric drag, satellite instruments will quantify atmospheric density.

“For all the students who have worked on this project for the past three years, it is exciting to be one step closer to launch,” said student mission manager Erin Puckette, a UVA fourth-year mechanical and aerospace engineering major. “It has been a long time coming and we can’t wait to see the satellites in space.”

Astronauts aboard the International Space Station will release the CubeSats so they can orbit together as a constellation. The ODU satellite, which has a drag brake to intentionally cause orbital decay, is expected to remain in orbit for up to four months. The other two satellites, including UVA’s, should orbit for up to two years at an altitude of 250 miles before burning up when they re-enter Earth’s atmosphere.

The satellites will communicate data to ground stations at UVA, Virginia Tech and Old Dominion for subsequent analysis using an analytical tool being developed by Hampton University students.

“Our students will be working with local amateur radio enthusiasts to build a ground station that will be used for radio communications with the spacecraft once it is in orbit,” said UVA mechanical and aerospace engineering professor Chris Goyne, who has mentored students throughout the project. “This will give our students valuable experience in spacecraft operations, an opportunity that is quite rare in undergraduate engineering programs.”

The students named their satellites after the Roman goddesses who represent the blessings of freedom and peace on the back of the Virginia state seal. UVA has chosen Libertas, the goddess of individual liberties; Virginia Tech selected Ceres, the goddess of agriculture; and Old Dominion University chose Aeternitas, the goddess representing eternity.

The Virginia Space Grant Consortium, based in Hampton, is administering the project.

“Engaging students in real-world space missions offers them exciting educational opportunities that provide critical workplace skills,” consortium director Mary Sandy said. “By taking on actual mission roles and going through NASA design and flight readiness reviews, students are learning how space missions are done and how to deal with the unique challenges of the space environment.”

The project is part of NASA’s CubeSat Launch Initiative, which provides opportunities for small satellite payloads built by universities, high schools and non-profit organizations to fly on upcoming launches. It is funded by the NASA Undergraduate Student Instrument Program and the Virginia Space Grant Consortium. The Undergraduate Student Instrument Program is managed by NASA’s Wallops Flight Facility on Virginia’s Eastern Shore.

The launch is scheduled for April 17 from Wallops Island on Virginia’s Eastern Shore.